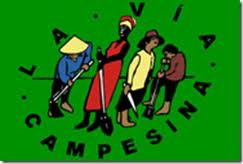 From seed supply, farming machinery, to wholesale and retail distribution, food production has become largely dominated by large corporations, which are happy to sacrifice biodiversity and environmental and social sustainability for the sake of increasing profits. Indeed, the widespread use of the terms agribusiness and corporate farming, both by critics and academics and by corporates themselves, is a testimony to this domination. And that is not just about the the ownership of land, as evidenced by the practice of contract farming, which is essentially a tool in the hand of big corporations to control and ‘vertical integrate’ traditional family farms.

Most of the meat, eggs, dairy products, fruits and vegetables available in supermarkets today are produced using methods of industrial agriculture.[1] Four huge companies now control over 75% of beef production and fewer than ten agrochemical companies control 91% of the global pesticide market.[2] This is often justified by the increased urbanisation, globalisation, population and economic growth and so on. We are told that small family farms are not economically sustainable any more, and are made to believe that there is no way other than that of Cargill, Monsanto and a a handful of large multinationals that dominate the food industry. But there are alternatives to industrial agriculture, a ‘revolution’ that may have increased productivity and living standards (for some) but has had very hight environmental and social costs.

The resurgence of interest in organic, fair-trade, free-range and locally grown agricultural products is an expression of how so many people feel that the current food system is inherently flawed. The numerous local food projects, health food shops, food co-ops and farmers’ markets that have been set up in recent years are not only better for health and the local economy, but are also working alternatives to socially and environmentally destructive industrial food chains.

The Soil Association defines local food as “food arising from a system of producing, processing and trading primarily organic and sustainable forms of food production, where the physical and economic activity is largely contained and controlled within the locality or the region where it was produced, which delivers health, economic, environmental and social benefits to the people in those areas.”[3] ‘Veg box’ schemes are a good example of organic produce delivered to consumers directly from local producers.[4] A list of local food initiatives and organisations in the UK can be found here and here. For farmers’ markets, see the Farmers’ Markets website. For local health food shops, see the National Association of Health Stores.

On the consumption side, vegetarianism and veganism are becoming more and more popular in the West.[5] As well as animal abuse, the meat industry also contributes to environmental destruction due to the unsustainable intensive animal and agricultural production methods used. It is important, however, to emphasise that a vegetarian or vegan diet is not enough in itself – without adopting greener agricultural practices, such as the use of renewable energy in farming – to make the corporate food system more sustainable.

In fact, the corporate giants of the food industry, particularly supermarkets, are realising the increased popularity of the above-mentioned initiatives and projects and have been trying to turn these new ‘lifestyles’ into mere marketing tools. They are ‘eating up the alternatives,’ so to speak.[6] Most western governments now also have departments for ‘alternative’ and ‘sustainable’ farming, fairtrade and so on.[7] Yet, at the same time, they continue to push and support environmentally destructive policies and businesses. It is important to emphasise that ‘alternatives’ that do not address the root causes of what’s wrong with our food system (industrialisation, capitalism, consumerism) exacerbate rather than solve the problem.

Indeed, permaculture, an approach to designing self-sufficient human settlements and agricultural systems that are modelled on the relationships found in natural ecologies, was originally aimed at reducing society’s reliance on industrial systems of production and distribution, which were identified by the original founders of the movement in the 1960s 1970s as “fundamentally and systematically destroying Earth’s ecosystems.”[8] At the heart of the permaculture designs and practice is a set of ‘core values’ or ethics: earth care, people care and fair share.[9] Permaculture communities continue to grow around the world and expand on these original ideas, integrating a range of alternative and aboriginal cultures.[10]

These initiatives are not confined to country farms or cliquey communities of activists. Urban agriculture, or urban gardening, is becoming increasing popular in many big cities around the globe, with families and communities growing their own food on rooftops, allotments and urban ‘waste’ land.[12] Urban gardening has been described as direct action to save the planet.[13] In the words of Oaxacan community organiser Kiado Cruz, “Twenty families with rooftop gardens may not sound like a lot, but when they are part of a rising social movement they can shake Mexico and the global corporate food system.”[14] Examples in the UK include Organic Lea, the Common Ground Garden, the Islamic Community Food Project in London and many others. For a list of ‘city farms’ in the UK, see here. For practical advice and information, see here. For more about allotments, see here and here.

Of course, multinational corporations have more political and economic power than local initiatives and individual farmers. Without self-organisation and cooperation between farmers and food cooperatives, corporations will inevitably use their bargaining clout to their financial advantage. More and more people are therefore realising the need for more radical, structural change, with more emphasis on food sovereignty and supply-side resistance. Indeed, growers and farmers networks have mushrooming over the past two decades, particularly among those who do not feel that the existing organisations and unions represent their real interests.[15] One of the most inspiring has been La Via Campesina, an international movement that was born in 1993 to bring together peasants, small and medium-size farmers, landless and indigenous people, migrants and agricultural workers from around the world. It now comprises about 150 local and national organisations in 70 countries, representing about 200 million peasants and farmers. The idea of food sovereignty, which was introduced by Via Campesina at the World Food Summit in 1996, ensures that “the rights to use and manage lands, territories, water, seeds, livestock and biodiversity are in the hands of those who produce food and not of the corporate sector.”[16]