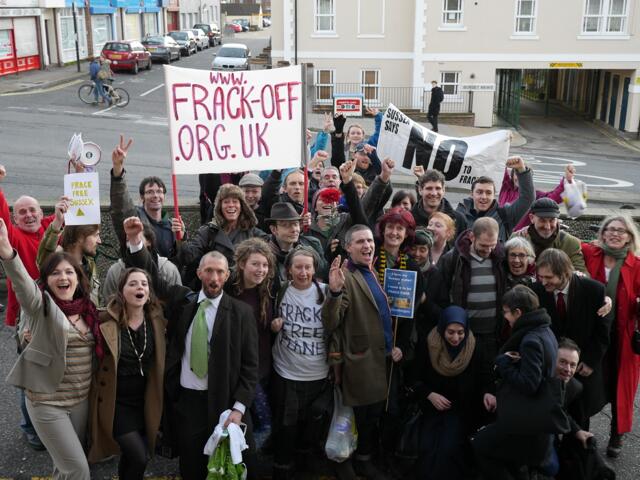 Eleven anti-fracking campaigners have been found not guilty after a three day trial at Brighton Magistrate’s Court.

The defendants had been arrested on the 2nd day of the protests against Cuadrilla’s exploratory drilling at Balcombe last summer while sitting on or around a log which had been dragged outside the gates to the Cuadrilla site.

The protesters were approached by what one defendant described as “battalions” of police and arrested en masse. The arrests were violent, with police using pressure point techniques as they dragged people away. One man, who was drinking a cup of tea at the time the police approached was arrested for assault for spilling tea on a police officer during his arrest.

The arrests were part of a concerted police strategy to stamp out resistance to fracking in Balcombe before it had begun in earnest. Those arrested were given stringent bail conditions not to go back to the area close to Cuadrilla’s operations. However, police bullying tactics were not successful, despite over 120 arrests during the 2 months that the Balcombe Community Protection Camp was in place. The resistance, which included regular blockades and direct action, significantly delayed Cuadrlla’s work. The company’s planning permission expired in September 2013 and they left the site on September 28th having dug their well but without beginning testing. It is estimated that the policing costs amounted to £3.7 million during the course of the protests.

The campaigners were initially arrested under the provisions of article 241 of the arcane Trade Union and Labour Relations Act, a law brought in by John Major’s Conservative government to prevent trade unionists picketing in solidarity with other workers or, as the judge put it (with a straight face) “to protect people’s right to work”. One defendant said during his evidence, “I think they were just scraping the barrel and couldn’t find a real reason to arrest us and had dug up this obscure secondary picketing law”. The charges were later amended to obstructing the highway.

Several defendants said they were shocked at the police tactics. One woman described a carnival atmosphere at the gates of Cuadrilla with children playing tennis and hopscotch in the road before what she described as “militarised” police waded in to break up the protest and arrested her in front of her daughter.

One demonstrator, who had dragged the log into the road, said he had done so to make the point to Cuadrilla that “we need to have a conversation about what you’re trying to enforce on a community who don’t want this sort of business going on in their back yard”.

The judge ruled that he could not be sure that the defendants had intended to obstruct the highway and that the fact that the road was closed while it was being resurfaced went in their favour. The court had heard that the police had not given sufficient warning before making arrests.

At least another 19 defendants are awaiting trial after being arrested during the Balcombe protests.

Charlotte Wilson, a spokesperson from the Frack Off campaign said, on hearing the verdict: “The fracking blockades at Balcombe and now Barton Moss near Manchester, are testament to the level of anger and fear surrounding these developments. There are now 70 or more groups resisting fracking developments nationwide. The industry is losing. Each new well is met with months of protests and millions in policiing costs. The scale of the governmrent’s sell-off means that roughly 60% of the UK is now available to fracking companies, huge numbers of people are threatened and as a result communities from all corners of the country are getting organised.”

IGas Energy, who describe themselves as a “leading British oil and gas explorer and developer”, are currently trying to set up a well to begin exploratory drilling in Barton Moss, in the face of concerted resistance and direct action from another camp which has been set up for around 45 days. Information about the campaign can be found at the Northern Gas Gala website at http://northerngasgala.org.uk/.

For more information about anti-fracking movements in the UK see www.frack-off.org.