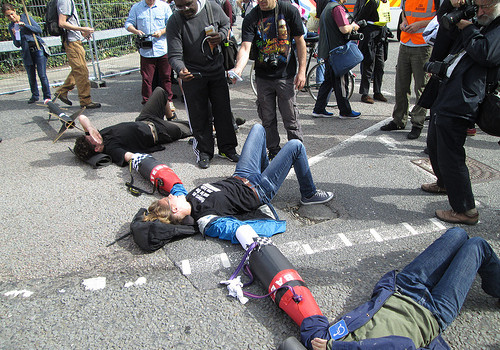 A statement by the activists lawyers reads:

“Hodge Jones & Allen solicitors today confirmed that they have obtained a summons against two international arms companies – TIAJIN MYWAY INTERNATIONAL TRADING COMPANY and MAGFORCE INTERNATIONAL for promoting unlawful weapons at the DSEi Arms Fair in the Excel Centre in September 2013. Evidence that both companies had promoted unlawful weapons emerged during the arms fair itself. This lead to companies being ejected from the fair and the relevant material being passed to authorities.1 HJA had written to the DPP, CPS, Revenue and Customs, the Met police, Vince Cable and the Attorney General2 to enquire about an investigation by the State and make representation that action should be taken against the companies – to date no substantive response has been received. The arms companies were promoting stun guns/stun batons and leg restraints – all of which are classified as “Category A items” under the Export Order Act 2008 and should not have been promoted in the arms fair.”

The two activists had previously been on trial for public order offences during the protests against the 2013 DSEi arms fair. Their charges were dropped after they argued that their actions were justified due to the illegal activities of companies at the fair. A statement from the activists reads:

“Following repeated attempts by our lawyers at disclosure regarding the nature and extent of the authorities’ investigation into breaches of law at the arms fair, most of our trial group’s criminal prosecutions were dropped. This week, we commenced our own private prosecution proceedings against the arms dealers. We want to make clear that we are not merely opposed to ‘illegal’ weapons at the arms fair, we are against the arms fair full stop and everything it represents: the corruption, the human misery, and the profiteering by a narrow elite at the expense of people and planet. We see this private prosecution as a further step towards meeting our objective of discrediting and then stopping the DSEI arms fair for good. Please support us in this campaign and spread this message.”