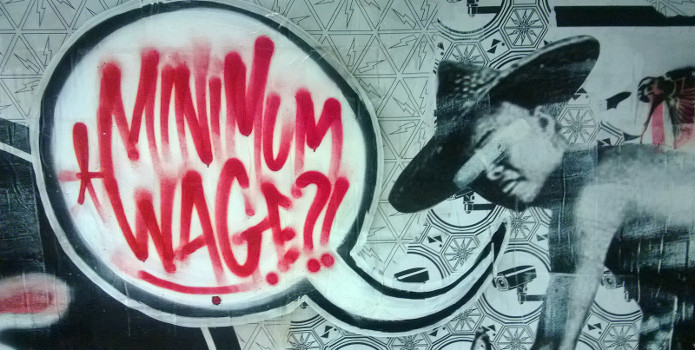 As a hybrid of prison labour and sub-zero hours exploitation, the cheap work done by migrants in UK detention centres is open to challenge in the courts, one barrister argues.

Inside the walls of the UK’s ‘Immigration Removal Centres’, a regime of low-paid labour has seemingly cast detained migrants outside the protections of the law – while saving companies and the government hundreds of thousands of pounds in wages.

Corporate Watch’s research, alongside a new film Working Illegally, highlight the current scale of labour exploitation within the detention centres – with migrants being used to perform tasks essential to the running of centres for just £1 an hour (and £1.25 for a smaller category of ‘jobs’).

The companies are exploiting a legal vacuum. Detained migrants are neither “workers” nor “employees” for the purposes of contract and employment law.

Instead, they are subject to a special scheme established by statute (Section 153 Immigration and Asylum Act 1999), organised via Detention Centre Rules and executed by private contractors with an apparent financial incentive in expanding the hours and the tasks.

Detention Centre Rule 17 gives you a good idea of what was originally envisaged:

17(1) All detainees shall be provided with an opportunity to participate in activities to meet, as far as possible, their recreational and intellectual needs and [for] the relief of boredom”.

(3) Detained persons shall be entitled to undertake paid activities…”

Using the limited framework of “paid activity” for the purposes of “relieving boredom”, the companies running the detention centres have instituted vast schemes in which thousands of hours’ work are being performed – including essential tasks such as cleaning and cooking. It is arguable that by expanding the nature and purpose of work far beyond the plain wording (and intent) of the legislation, the Home Office and the companies are acting unlawfully (the schemes are “ultra vires” – namely, they are without statutory support).

Without the detainee labour, the companies would be forced to hire workers/employees to make sure the same jobs were done [and would be paying the minimum wage to do so]. That’s where the savings are generated. The scale is highly indicative of the regime being expanded for purposes beyond the Detention Centre Rules, rendering it unlawful.

The special scheme which has allowed low-paid labour to become institutionalised inside ‘Immigration Removal Centres’ is designed to place the work outside the bounds of contract and employment law – the Government’s position would appear to be that there is no implied contract in operation and therefore no status for the detainees in civil law, either as “workers” or “employees”.

The status-labels of “worker” and “employee” (legal terms of art) define the rights and protections afforded to individuals. A worker, for example, has access, amongst other things, to the national minimum wage and sick pay; an “employee” has a higher status – bringing with it rights against their employer such as unfair dismissal and redundancy protection.

In general, you’re better off as an employee than a worker – which is why zero-hours contracts were created to deny employee status to a million people in the UK.

But what if you’re not even a “worker”? One example of this sub-zero category are interns, who are often doing a job over an extended period which saves the company money but who are still denied a status that would lead to a proper wage and attendant protections.

Detained migrants, meanwhile, have no right to work outside immigration detention since, as “persons liable to detention” under the Immigration Act 1971, they are by definition people without leave (or permission) to remain in the UK.

But if the aim and effect of the special scheme is to put detained migrants outside “worker” status, it’s hard to reconcile with s.153A of Immigration and Asylum Act 1999 (enacted in 2006) which states: “A detained person does not qualify for the national minimum wage in respect of work which he does in pursuance of removal centre rules”.

If detainees cannot, by definition, be workers, why create an explicit exemption? The implication is that detainees might very well be workers and a statutory exemption is therefore necessary to head off any potential national minimum wage claims brought in the Employment Tribunal or County Court.

This remains an untested area of the law – only by a challenge being brought would the Government’s real position be flushed out. And if the exemption only applies to work done “in pursuance of removal centre rules”, namely Rule 17, any work which can be shown to be done outside those aims would also arguably fall to be compensated in accordance with the minimum wage.

The detention centre arrangement is analogous to the way “paid work” is arranged in prisons (under The Prison Act 1952) – but with several crucial differences. The operation of, and justification for, low-paid labour as part of penal policy have always been made clear and have a statutory basis: the aim in prison is explicitly to rehabilitate (engaging in work is meant to help prepare prisoners for a return to life on the outside) and punish (the state can expect convicted prisoners to be compelled to work a minimum period each week – ie. It is not voluntary). It is for that reason that Article 4 of the European Convention on Human Rights, which prohibits “forced labour”, includes a qualifier that the right doesn’t apply to “work required to be done in the ordinary course of detention”. (Interestingly, International Labour Organisation (ILO) Conventions, while exempting prison work from notions of “forced labour”, do not do so if the labour is benefiting private companies.)

But immigration detainees are not criminals serving a sentence, they are not engaged in work “[compulsorily] required to be done in the ordinary course of detention”, nor, if the Home Office are to be believed, are they meant to be detained for any reason other than to facilitate ‘removal’ within a matter of weeks.

The reality on the ground in the last decade is that as migrants spend longer and longer in detention – and as companies seek to make financial savings – the detainees are being treated like prisoners, including having imposed upon them a regime of work which is uncannily similar to what convicted criminals undergo – without the justification that penal policy might be said to provide.

While the Home Office fall-back position may be that “paid activity” in detention centres is ultimately “voluntary”, the evidence gathered by Corporate Watch indicates that many detainees feel obliged to participate in the scheme in order to receive payment which is used to meet essential living needs, including toiletries. And apparent consent is not the end of the matter: detainees who are especially vulnerable should not be placed in a position where low-paid labour becomes necessary. As with any victim of forced labour, power, coercion and exploitation can vitiate a voluntary decision.

Even the regime in prisons is now likely to be reformed. The Howard League for Penal Reform has long campaigned for the minimum wage to be paid in prisons – alongside “normal” protections: “There is no reason why prisoners should not sign private law contracts with their employer like normal employees”. These were proposals which the Conservative Party once hinted it would support.

But if there is a moral and public policy case for prisoners to be entitled to the minimum wage, the claim of detained migrants to the same is equally, if not more, potent. Without any of the “penal policy” justifications for low pay, the Government and the companies have never even sought to provide a reasoned basis for engaging detainee migrants in labour at rates of just £1 an hour.

More fundamentally, the entire scheme as it has developed since 2006 in fact rests on a shaky legal foundation which is open to challenge.

Taimour Lay is a barrister at Garden Court Chambers specialising in immigration and human rights. This article is a version of a talk given at a preview of the film Working Illegally on 26 March 2015.