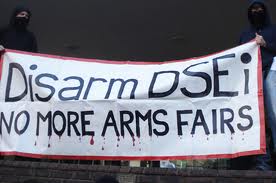 Anti arms trade activists have brought the case against Magforce. Susannah Mengesha, the claimant, told Corporate Watch: “Today at the very court where we ourselves were due to stand trial for disrupting the arms fair, two international arms companies will finally begin to be held to account for their promotion of illegal torture weapons at DSEi.

This is a rare opportunity to confront the arms dealers for (some of) their actions on our own terms and for once in a forum of our own choosing.

We are absolutely clear that Magforce and Tianjin MyWay promoted illegal torture weapons at DSEi. It is also true that we oppose the sale for corporate profit of all machines designed to inflict torture and death more widely.

Whatever the outcome of this trial, there is nothing the court could do to undo the experiences of the victims of these despicable electro-shock weapons.

This case is just one aspect of a much wider struggle. The DSEi arms fair cannot be stopped by litigation alone. We must resist the arms fair on all fronts – in the courtroom, via public debate and on the streets.”

The two activists bringing the case had previously been on trial for public order offences during the protests against the 2013 DSEi arms fair. Their charges were dropped after they argued that their actions were justified due to the illegal activities of companies at the fair.

Magforce were represented by Ian Morley, a Queens Counsel from 23 Essex Street. The case is likely to be listed for a full trial later this year.