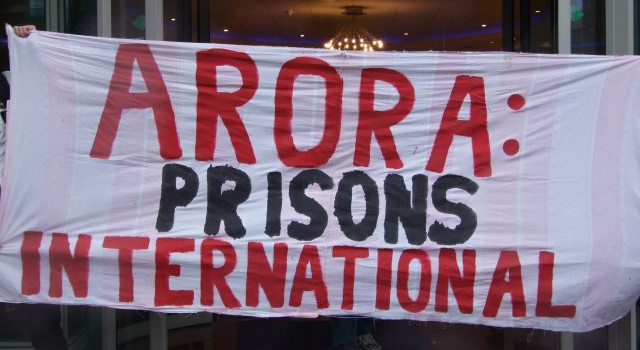 Activists from No Borders London staged a protest last week inside the Arora International Hotel, near Heathrow airport, against the hotel owners’ plans to turn one of their other hotels, at Gatwick airport, into an immigration prison. Driven by what appears to be a decline in business, Arora Management Services had applied to the Crawley Borough Council for permission to convert its four-star hotel, Mercure, into an immigration detention centre. As one of the protesters put it, “this is just another example of the cynical, profit-driven opportunism exhibited by big companies wanting a slice of the lucrative detention market.”

The art of planning

Planning application no. CR/2009/0421/COU, which can be viewed on the Council’s website, shows that Tim Jurdon, Arora’s head of planning, lodged a ‘change of use’ application with the Council on behalf of Arora Management Services Ltd. on 10th September 2009. The application seeks permission to change the property’s use from Class C1 (hotels) to Class C2A (secure residential institutions), or what the application refers to as “removals centres”.

The Crawley Borough Council’s Local Plan 2000 – Saved Policies, September 2007, states that planning permission “will not be granted for development within the airport boundary which is not clearly required in this location for [the airport’s] operational, functional, safety or security reasons.” Policy GAT 4, which covers changes to Gatwick, specifically lists the following “major developments and uses” as shown on the Proposals Map: (i) cargo handling facilities; (ii) aircraft maintenance and engine testing facilities; (iii) other operational developments; (iv) an airport visitor centre; (v) short and long term passenger car parking; (vi) activities ancillary to the airport’s operation; and (vii) structural landscaping.

Arora, however, is trying to sell its plans arguing that locating detention centres at airports would make deportations easier and less costly for the immigration authorities. The Planning, Design & Access Statement accompanying the planning application claims that “there are clear operational, functional, safety and security reasons why an airport location would be suitable or desirable for this development as required by Policy GAT4 of the Local Plan.” More specifically, “close proximity to the airport terminals and immigration handling facilities provides the functional link and relatively short distances to transport detainees.” The kind of incentive the UK Border Agency would like to hear, perhaps, but whether it’s enough to entice the airport management or the council is yet to be seen. As one local resident, sceptical of the centre’s conformity to the requirements of the Council’s GAT 4 policy on Gatwick, commented in his objection to the plan on the council’s website, “The application [is] made by the existing owner but without saying on whose behalf. Who wants this change of use? Who is going to be the user of the building after the change of use?”

The Council’s Development Control Committee is expected to make a decision on Arora’s application by 18th December 2009. If planning permission is granted, the Mercure Gatwick hotel will be converted into a secure prison and its 245 bedrooms into single and family cells, which means the new detention centre will have a capacity close to that of Yarl’s Wood in Bedfordshire. In correspondence between Arora and the Crawley Council seen by Corporate Watch, Tim Jurdon, euphemistically refers to the detainees as ‘residents’ and reassures the council planning officer that “there would be no increase in the number of residents.”

According to the application, the use of the existing hotel as a detention centre would not involve new buildings or extensions, only internal works. Security fencing, however, would to be erected, and the application suggests this will be similar to that of Brook House (5.2m high weldmesh). Arora, however, promises that the fence will be set in from the boundaries to “retain existing boundary landscaping.”

Eight out of the UK’s 11 detention centres are run by private companies. Four are located inside or near airports. Locating detention centres inside airports conveniently serves to keep detention and deportations out of the public gaze as airports are subject to special bylaws and accessing them, for example by visitors and campaigners, is much harder.

The Home Office insists it has “no plans to build another removal centre at Gatwick.” The UK Borders Agency website, however, states the following regarding its plans for expanding the ‘detention estate’: “General expansion – We continue to take up other opportunities for general expansion of the estate in the existing centres.”

The Mercure Hotel Gatwick is a four-star hotel located on Povey Cross Road, Crawley, off Gatwick’s North Perimeter Road. Unlike most of Arora’s hotels, which carry its brand name, Mercure is a brand owned by French multinational Accor. Ranging from two to four stars, the Mercure hotel brand is present in 49 countries, with over 750 hotels. Mercure Gatwick, formerly known as the Renaissance Hotel Gatwick, was bought by Arora from the Airport Property Partnership (APP) in 2008 and is operated under a franchise agreement with Accor Hospitality.

Although Gatwick is the UK’s second largest airport and the world’s tenth busiest international airport, both passenger and flight numbers have been steadily falling for almost two years. This has naturally affected airport hotel revenue too. Data from STR Global, a leading provider of market information to the world’s hotel industry, shows that the average daily rate of occupancy at Gatwick hotels has been in almost continuous decline since the beginning of 2008. As well as the general economic downturn, this decline in Gatwick’s hotel occupancy can be partly attributed to the increase in hotel room supply, with 264 rooms added in the last two years alone.

According to the BBC, Arora admitted that the current economic climate had “caused them to look at a variety of options for a number of their buildings.” And their ‘option’ for Mercure Gatwick, of course, is to try to turn it into a detention centre; as one campaigner put it, “that’s where the money is these days.”

Arora International Hotels is a luxury hotel company owned and founded by Surinder Arora in 1999. It is the UK’s biggest specialist hotelier to the airline industry and one of the fastest growing private hotel companies in the UK. Its primary focus is to “develop and operate luxury hotels specifically designed to accommodate airline personnel and corporate and leisure customers.”

Arora hotels are owned by Arora Holdings, which is, in turn, owned by the Arora Family Trust. Arora’s portfolio includes 16 luxury hotels, with over 6,000 bedrooms, located in and around Heathrow, Gatwick, Glasgow and Stansted airports, in addition to one in Manchester city centre. The company also has interests in the Wentworth Club and has recently purchased Wycombe Airpark, Buckinghamshire, a private airfield and base of the British Airways Flying Club. In addition to hotel interests, the Arora Family Trust also owns a large property portfolio, predominantly located at key UK airports.

Having worked for British Airways and Abbey Life for many years, Surinder Arora’s first independent project in 1993 was a B&B opposite Heathrow airport to house airline staff. The B&B was demolished in 1997 to make way for the Arora International Heathrow hotel, which opened in June 1999 with a BA contract to accommodate its air crews. It was soon joined in 2001 by the Arora Park hotel at Heathrow and the Arora International Gatwick.

In 2004, Arora became the first company in Europe to win a 15-year franchise from Accor for its upmarket Sofitel brand. This was put to immediate use when Arora bought the 500-bedroom Le Meridien London Gatwick hotel and rebranded it Sofitel London Gatwick in October that year. In August 2004, Arora, funded by the Allied Irish Bank and the Royal Bank of Scotland, beat established multinationals in the hotel business and won a contract to open the only hotel at Heathrow’s new Terminal 5, which was opened in 2008. (Perhaps this is better understood when we learn that Surinder Arora is a close friend of Mike Street’s, the British Airways director responsible for Terminal 5.) The £180million, 605-bedroom hotel, with direct access to Terminal 5 via a link-bridge, is one of Europe’s largest luxury hotels and conference centres, with facilities for up to 1,500 delegates. In between the Sofitel deals, Arora also opened a smaller, 141-bedroom Arora International hotel in Manchester city centre, in a joint venture with Sir Cliff Richard.

In January 2007, Arora announced it was due to build and operate a four-star, 170-bedroom hotel at the Brit Oval, south London, home of the Surrey County Cricket Club. However, in September that year, the plan suffered a setback as a local residents’ group lodged an objection with planning councillors. The hotel was planned to open in 2010.

In January 2008, the Arora Family Trust pulled off its biggest deal to date and acquired the Airport Hotels Unit Trust, an Airport Property Partnership (APP) fund comprising a portfolio of nine brand hotels located in and around key airports in the UK, in a deal worth £309m. APP, a joint venture between BAA and Morley Fund Management, sold Arora 33 of its properties for £236m, which included a range of international brand hotels, including Hilton and Renaissance hotels at Heathrow and Gatwick. Arora International Hotels only runs one of these, the Sofitel at Gatwick, while the rest are still operated by BAA. The deal, which was financed by the Royal Bank of Scotland and advised by London firm Macfarlanes, also included three further airport properties, to be built later, priced at £73m.

In June 2008, Arora bought a further £40m worth of offices from APP whilst the latter’s negotiations with ProLogis to sell its whole industrial assets were ongoing (they later collapsed). Arora also reportedly expressed its desire to buy two further assets: an immigration centre and an office building near Gatwick.

In September 2009, Arora entered a £125 million joint venture with budget hotel chain Premier Inn, which is owned by Whitbread, with plans to build four new hotels at Gatwick, Heathrow and Stansted airports. The new Gatwick hotel will be the first terminal-based budget hotel in the UK.

Surinder Arora, the owner and chairman of Arora International Hotels and chairman of Arora Holdings, continues to build his ‘family businesses’. He is described as one of the richest people in Britain and continues to be listed on various ‘rich lists’. The Sunday Times Rich List, for instance, ranked him in 2009 at 388, with a wealth of £140 million, down from 362 (£225m) in 2008. He is also the deputy chairman of the exclusive Wentworth golf club and hotel in Virginia Water, Surrey, which he acquired in 2005 in partnership with clothing tycoon and restaurant owner Richard Caring. For more details on Surinder Arora, see these interviews: