Title image: An injured child in Cizre, who was shot as he went to buy bread on Monday. Photo from JINHA Women’s News Agency.

Right now in London, tanks, guns, drones and missiles are being transported to the EXCEL Centre in preparation for next week’s DSEI Arms Fair – one of the biggest arms fairs in the world. Since Monday, protesters have been successfully blocking the vehicles that are transporting the weapons, and even gatecrashing the set-up inside the EXCEL building.

The ‘International Partner’ of the Arms Fair is the Turkish government’s Defence and Aerospace Industry Exporter’s Association. Turkey is keen to promote itself as a key exporter of arms, and Turkish companies will be peddling their weapons to the world’s arms dealers and war criminals. Turkish companies are currently building new drones, producing new MPT rifles and designing the Altay battle tank for the Turkish military. Turkey is also developing its own TFX fighter jets. The first prototype of the jet is planned to be ready in 2023 to coincide with the hundred year anniversary of the establishment of the Republic of Turkey.


As it steps up its new attacks on the Kurdish population, Turkey is also importing more weapons. It is currently buying F35 fighter jets and Chinook helicopters for its military and police force.

Numerous arms companies supply weapons to the military and police of Turkey. The weapons they manufacture are used by the Turkish state in its repression of Kurds and have been used in the suppression of uprisings such as Gezi. Evidence has shown that Turkey has been colluding with ISIS and supplying them weapons (read here and here), so arms purchased by Turkey may also fall into ISIS hands.

With Kurdish citizens dying daily in Turkey’s latest attacks on Kurdish people within its borders, it is essential to campaign against arms sales to Turkey.


The Turkish government sends a delegation to DSEI every two years to facilitate the buying and selling of weapons. If Turkey purchases weapons at DSEI, those weapons will be used in its attacks on Kurdish people. But the purchasing of weapons from Turkish military companies supports Turkish militarism, too. It will help Turkey to become a massive, independent military power, so it’s important to oppose arms sales both to and from Turkey.

Since the pro-Kurdish HDP party won seats in the general election in June, Turkey has once again carried out attacks on the Kurdish population living within its borders. In the past week, Turkish military and police have mounted a relentless assault on the town of Cizre, and twenty-one people have been killed within the past few days. A ten year old girl was shot dead by snipers as she left her home with her hands in the air whilst attempting to get medical help for her father. He was also killed. On Monday, police shot three children from an armoured vehicle. They had left their houses to buy bread.

The government of Turkey is aiming to produce all of their military equipment within Turkey, and increase their arms exports to their allies. During the 2015 Turkish election campaign, The AKP boasted that Turkey will make all of their own military equipment, with massive posters on the streets proclaiming, ‘We’re making our own warplanes’  and ‘We’re making our own tanks’. 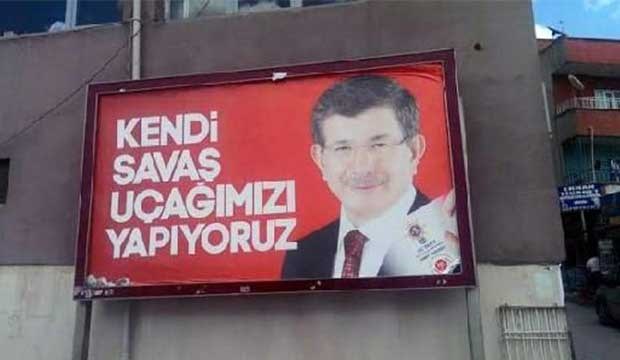 ‘We’re making our own warplanes’. Photo from Bir Gün

President Tayyip Erdoğan stated: “Our goal is to completely rid our defence industry of foreign dependency by 2023.” Prime Minister Ahmet Davutoğlu also said in January 2015: “Now we have a Turkey that won’t bow to others with its own national defence industry. This is the new Turkey.”

Keen to promote Turkey as a key arms exporter, the Turkish government’s Defence and Aerospace Industry Exporter’s Association (SSI) is the ‘international partner’ of the DSEI arms fair. SSI chairman Latif Aral Aliş stated: “A country’s development can be associated with the development of its defence industry. We identified our export target as 25 billion USD for year 2023 which is the 100th anniversary of the establishment of the Turkish Republic. We desire to take [a] place at the top 10 of [the} world defence industry.”

The UK government identified Turkey as a ‘priority market‘ for UK arms exports in 2015. During the last DSEI arms fair in 2013, senior UK Trade and Investment officials held two private meetings with the Turkish delegation to discuss arms exports.

Below are some of the companies that arm Turkey and will be exhibiting and selling their weapons at DSEI:

Turkish Aerospace Industries (TAI) and TUSAŞ (TEI) – Located in Ankara, TAI produces F16 jets, helicopters, and drones for both firing and surveillance. It is ranked 78th in Defense News’ ‘World’s Top 100 Defense Giants’. TAI and TEI are currently producing the new Turkish TFX twin engine fighter jet which will work alongside F35 jets. The Turkish Air Force is planning to buy over 250 TFX jets, which will be introduced in 2025. Since its recent attacks on Kurdish guerillas began, Turkey stated in August 2015 that it will buy 30 new drones, 15 of which will come from TAI. The other 15 will come from Turkish company Baykar Makine. The Turkish police stated that they are “to be used against rising terror attacks”.

Boeing – The second largest arms company in the world, Boeing is supplying the Turkish military with new CH-47 Chinook helicopters. 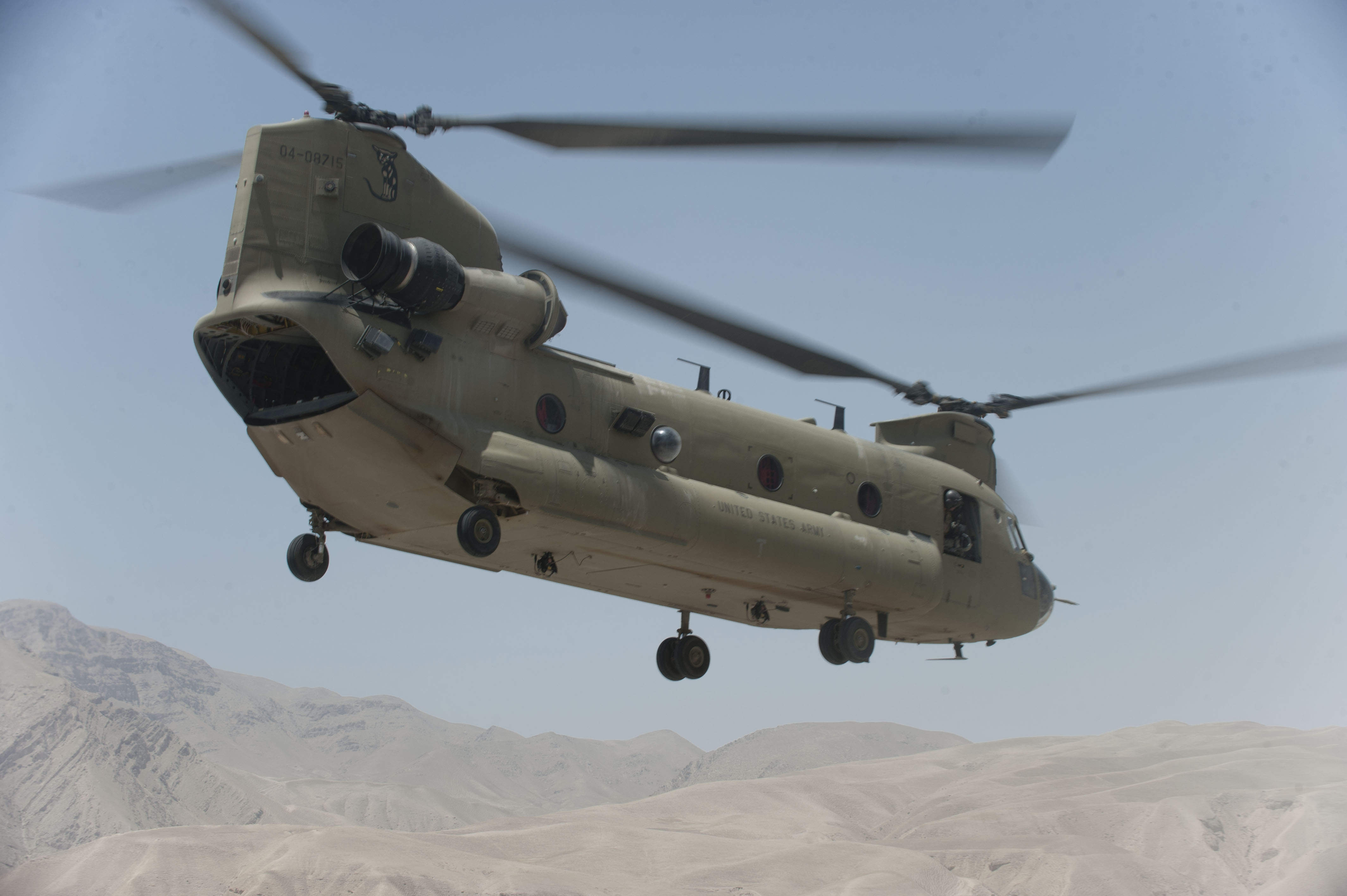 Lockheed Martin – The world’s largest arms company, Lockheed manufactures F16s used by Turkey, along with Turkish Aircraft Industries. F16s were used in the Roboski massacre in 2011, where 34 people who were engaged in cross border trading were killed by Turkish F16s. Lockheed also supplies Hellfire missiles. “Lockheed Martin has a long history of partnership with the Republic of Turkey,” Rick Edwards, executive vice president of Lockheed Martin, said. In January 2015 Turkey ordered four F35 Lockheed Martin fighter jets. “It is planned that Turkey will buy 100 F35 warplanes in the project. We previously ordered two in this framework. We have now decided to order four more,” Turkish Prime Minister Davutoğlu said. 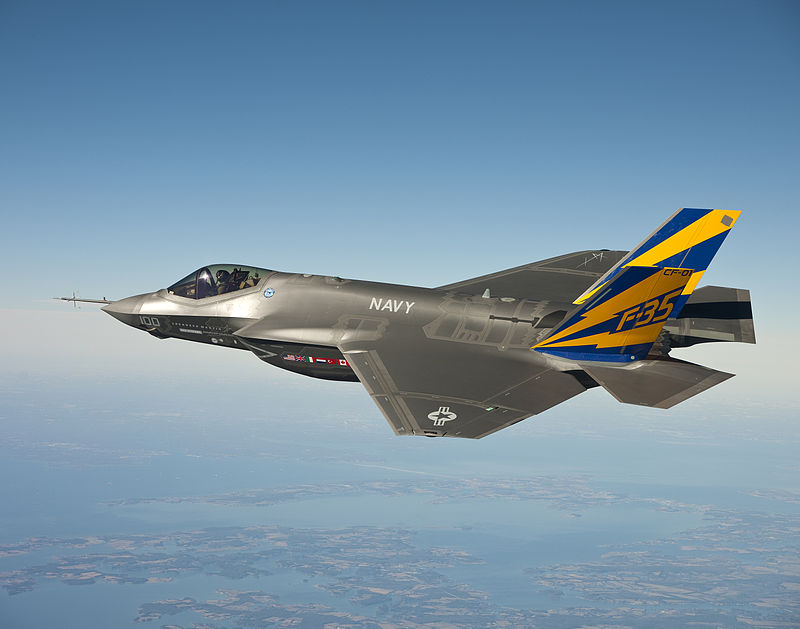 Otokar – Manufactures Akrep and Cobra vehicles used by police and army, which can be seen daily on the streets of cities like Amed (Diyarbakır). Otokar is also developing the Altay battle tank for the Turkish army, alongside companies Aselsan, Roketsan and MKEK (see below).

Roketsan – Major Turkish weapons manfacturer. It is best known for its vast range of unguided rockets as well as laser and infrared guided missiles. It supplies the Turkish armed forces. Roketsan is working with Lockheed Martin on the development of cruise missiles for the F35 aircraft. It is also helping to develop the Turkish Altay battle tank.

MKEK – Supplies the Turkish armed forces and produces ammunition, rockets and explosives. It is currently developing the gun for the Turkish Altay battle tank. MKEK has also produced the MPT rifle. The Turkish Armed Forces eventually plan on buying up to 500,000 rifles, making the MPT its main service and combat rifle for the Turkish Army. 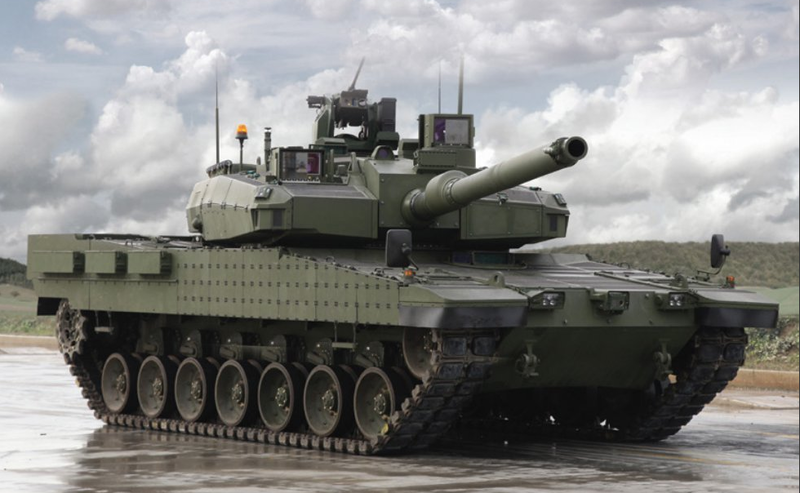 Non-Lethal Technologies – US company which manufactures tear gas used by Turkey. Its teargas has also been used against protesters in Palestine.

Condor Non-Lethal Technologies – Brazilian company that manufactures tear gas used by Turkey. Condor’s gas canisters were fired at people who had come to Suruç in 2014 to show solidarity with people under attack in Kobanî.

Israel Aerospace Industries – Makes Heron drones used by Turkey. Just one example of drone usage was during the Roboski massacre. Drones were used for surveillance before the attack. 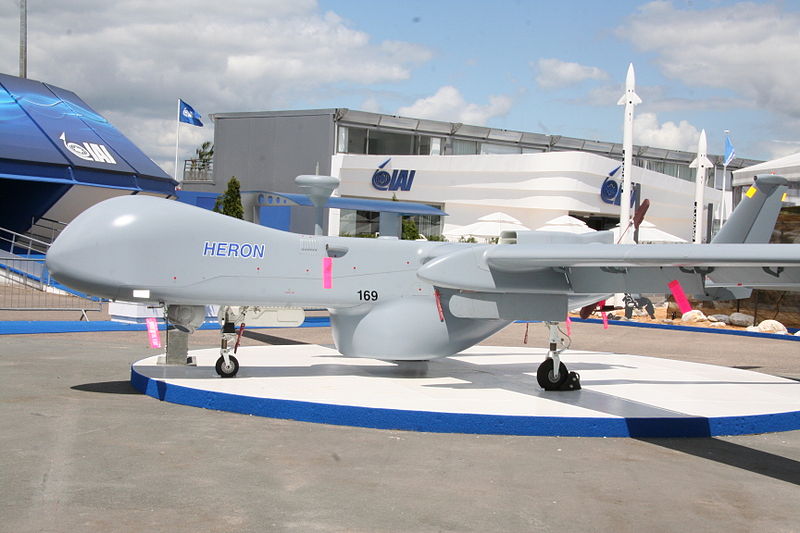 Northrop Grumman – A ‘gold sponsor’ of the DSEI arms fair, Northrop Grumman states that it is “in partnership with Turkish Aerospace Industries and Aselsan in contributing to a variety of Turkey’s defence capabilities and programmes.” Northrop Grumman is a principal subcontractor of the Lockheed Martin-led F35 team.

All of this week, activists have been blocking the roads and delaying the transport of weapons into the arms fair. On Saturday 12th September there will be a big day of action outside the gates of the Arms Fair. There will also be a Kurdish solidarity demonstration on Tuesday 15th September. Check the Stop The Arms Fair website for updates and information about the events. 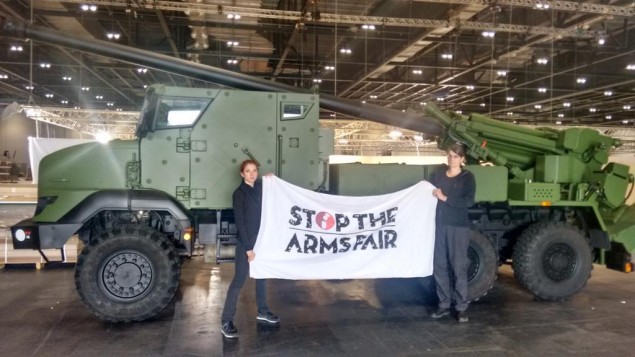 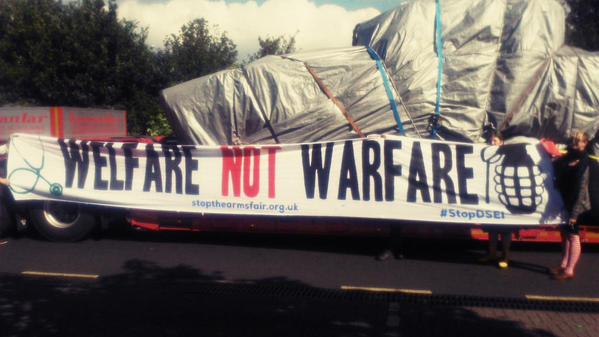 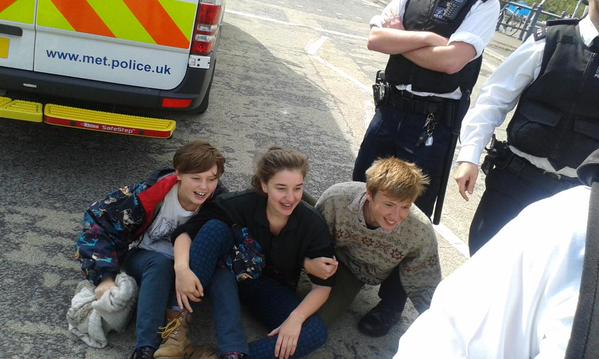