In a densely-populated corner of central Athens, a fierce battle is erupting. On the one side: Athens council, its investor friends, and various other hangers-on salivating over a parcel of prime real estate. On the other: residents young and old, students, anarchists, refugees, and artists who see the place as of vital symbolic, political and emotional significance.

The area is Exarchia. Long an epicentre for anarchists and squatters, it is also home to the Polytechnic University, site of the 1973 student uprising against the dictatorship and ensuing massacre.

The current neoliberal government of Kyriakos Mitsotakis took aim at the neighbourhood as soon as it was sworn in a little over three years ago, starting with a wave of squat evictions and mass detention of migrants living in them. Athens council, headed by the Prime Minister’s nephew (there is scarcely anyone in the Mitsotakis dynasty who doesn’t hold power), has since been on a concerted mission to wipe out the last vestiges of self-organisation and resistance that characterises the area.

Central to the council’s redevelopment plans are the construction of a metro station in the square, despite the existence of two functional stations nearby, and the redevelopment of the neighbourhood’s principal green space: Strefi Hill. Both projects are seen as part of a flagrantly political agenda and are strongly opposed by many who live there, resulting in parts of the neighbourhood having been placed under 24-hour occupation by the police.

In the past few days, the campaign to defend the hill has intensified as the council has sought to close it off for works. Growing anti-gentrification demos have been met with police aggression and beatings (including that of a journalist), and arrests.

To shine more light on this important battle, we interviewed people from the Open Assembly for the Defence of Strefi Hill, which has been at the centre of the struggle to protect the land from development. Translation from the original Greek. 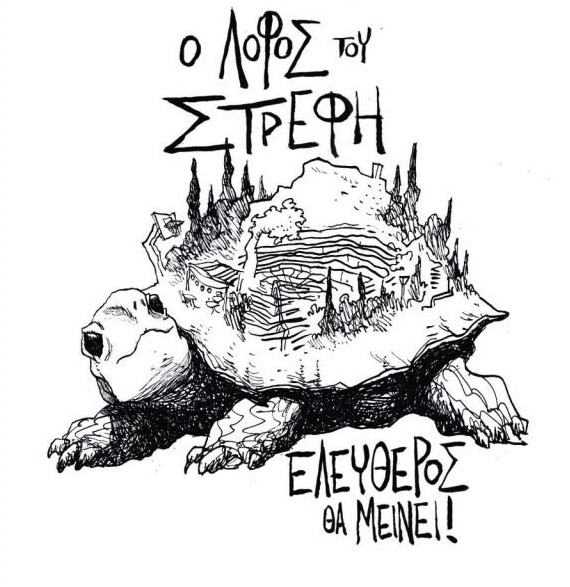 Can you give a brief description of the place for people who aren’t familiar with it?

Strefi hill is in Exarchia. It’s a free/public space in the centre of Athens and it is one of the few green spaces left in the urban area. It has a basketball court, an open theatre and a kid’s playground, which are all connected with stone paths that lead to the top of the hill from where you can view a large part of the city.

Can you give us a little history of Strefi hill and why it’s so important to people?

Up until the 1920s, the hill belonged to the Strefi family and was used as a quarry. Afterwards, it passed to the Greek state, and in 1930 to the municipality of Athens. Exarchia is an area with a rich history, since it has been the ground for many class and social insurrections and is a place where various self-organised projects meet.

Thus, today the hill is a place for meetings and assemblies of various groups; it’s a green space for anyone who wants to live even moments outside the suffocation of urban spaces; it’s a place for cultural events; it’s a place where homeless people find shelter; and it’s also the organisational ground for actions against the gentrification of the neighbourhood. 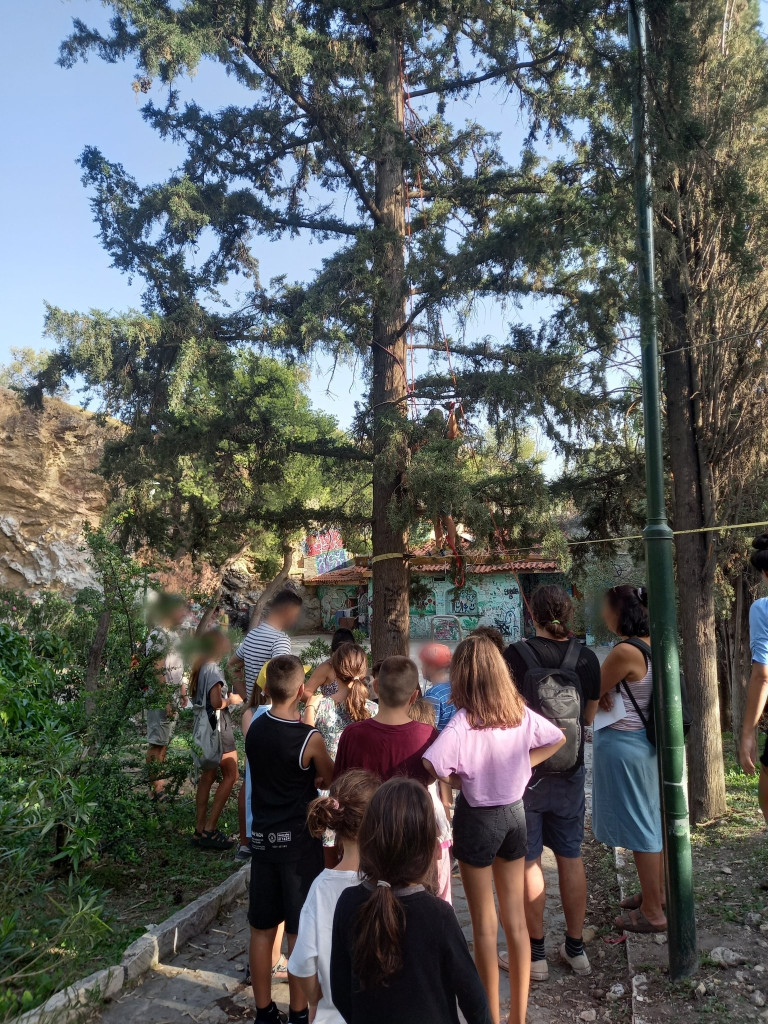 Tree climbing on the hill

What is the ecological significance of the project?

The company Prodea will construct anti-ecological ‘flood protection’ work similar to those built on national roads. The geotechnical study involves geogrids and gabions, which would result in the deforestation of all trees and bushes. This will not only block the hill off to people for a long time, but will destroy nests belonging to turtles and other animals, and block their access to food. Also, the project includes intense lighting in many parts of the hill. In practice, this means that many bird species that live on the hill or pass and stay will be kicked out. So we are talking about a project that will totally upset the ecological balance of the hill.

Can you give us some wider context of the political and environmental situation over there?

We are living through a period where besides Strefi hill, private interests in collaboration with the state and municipality are trying to take over most of the free green public spaces of Athens, to make them tourist attractions and totally gentrify the area.

Another important aim of the state is the de-radicalisation and de-politicisation of the areas of the city centre, and especially Exarchia. Besides their attempt to privatise the hill, they are trying to build an underground metro station in the only square of Exarchia. All of this, of course, comes hand in hand with severe repression. There are many cop units permanently stationed around the square and other cops on patrol – with all that entails (threats, aggressive behaviours, beatings, arrests).

Tell us a bit about the struggle so far?

The Open Assembly for the Defence of Strefi Hill has been going on for about one year and a half now, and from the very beginning it has met on a weekly basis. The actions vary. In terms of activities, we often do film-screening nights, collective cleaning and activities for children. To put pressure on the companies, we have done a non-publicised demonstration outside Unison offices and two public actions outside Prodea offices, as well as demonstrations outside the city hall when inside they were discussing the gentrification of the hill.

Who owns the hill?

As mentioned, the hill has belonged to the city council since 1930 and it is one of the few free parks in the centre of Athens. For many years now the municipal authorities have systematically ignored the needs of the hill (cleaning, maintenance, flood protection, support of the slopes, accessibility, watering, fire protection, lighting and gardening). In January 2021, the council conceded the hill to a real estate company, Prodea Investments.

So while the state continues to collect council taxes as normal, this company arrives like some form of ‘divine intervention’ to get rid of the council’s responsibilities. In general, Greece is going through a period where state and capital are trying to privatise everything, from electricity and water, to parks and forest areas. In the case of parks in urban areas, this is attempted initially through concessionary companies hired by the council in order to make gentrification projects for the profits of the powerful few.

What do you think the motives are behind the development?

The motives behind the project vary. The developers of the project, Prodea, simply aim to make profit, since they have in their possession a lot of properties in Exarchia and in the centre more generally. Through their work on the hill, they serve the tourist market of the area.

The council will place CCTV cameras and security boxes to surveil the space once the project is completed. So the main aim of the council is to get rid of all resistance from the hill and bring in private companies.

What work has been done so far?

[Editor’s note: the situation has intensified in the last few days, with attempts to close off the hill for work, and demonstrations followed by police violence].

Practically, until now the only thing that has happened is the license contracts between the council and Prodea real estate company. Companies have tried numerous times to make land surveys on the hill but were blocked by local people. In August 2022, the council decided to send police (many units of riot cops, motorbike cops and anti-crime cops) along with the companies to the hill, but people resisted and blocked many of the works, which were mainly land surveys. So until today, the hill hasn’t been altered, no machinery has ever come and the resistance goes on.

What companies have you identified as being involved, and what role do they play?

A part of the project will be carried out by Unison Facilities Services. Under the pretext of maintenance and regeneration, Unison will concrete over all the paths, and will cut trees and put up cameras, fences and security boxes for the control of the entrance. They may be given the ex-Vyzantino building (an abandoned building on the hill), for the cleaning and surveillance services of the hill, in order to freely exploit the workers and control the areas around their site. Unison is contracted by the council to manage all the green parks of the city, including Filopappou hill, Lycabettus hill and Tourkovounia, Plato’s Academy, Patision & Kiprou park, Goudi park, Protomagias square, Kipseli square, Victoria square, America square, Attiki square, Agios Panteleimonas square, Villa Drakopoulou, Fix Patision park, and the pedestrian precincts of Agias Zonis and Fokionos Negri.

Unison receives red-carpet treatment from the Athens municipality. Despite not being one of the biggest firms in the construction business, the project was ‘given’ to Unison for € 35.445.994, in a Best Value Tendering travesty.

What do you want to see instead of this development?

We believe that the hill, besides some problems that occur when it rains which can cause flooding or erosion is in a pretty good condition. We want a flood protection system but not the way it’s planned. We want it with plant-based landscape interventions for the support of the slopes and prevent erosion on the hill, something that would ensure the balance of the ecosystem, of fauna and flora. In the meantime, we do actions that bring more life to the hill like tree-planting, cleaning, watering. etc.

How can people support the fight?

For sure, participating in the assembly is important, because more people means bigger resistance. At the same time, making public our struggle and denouncing publicly the companies that are involved is very important in order for them to be hit financially, since what concerns them is profit.

Open Assembly for the Defence of Strefi Hill 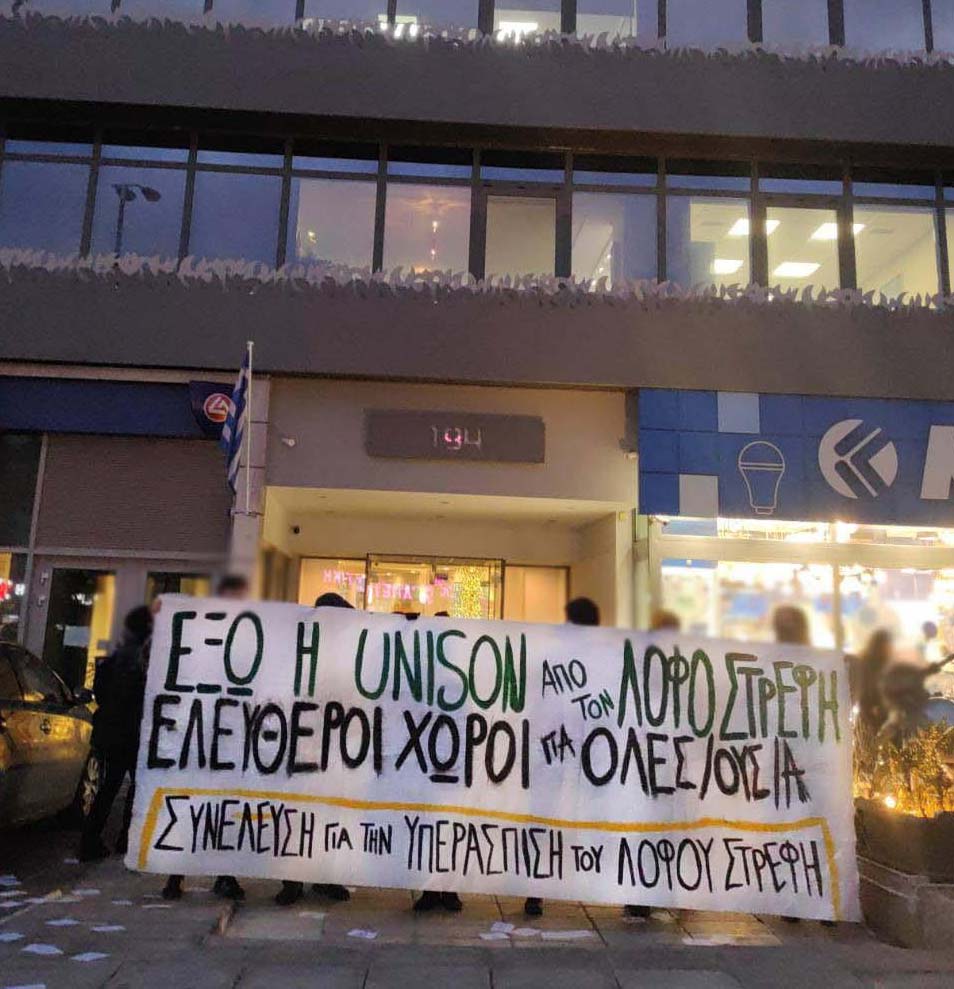 Demo against Unison. “Unison out of Strefi Hill; free spaces for all” 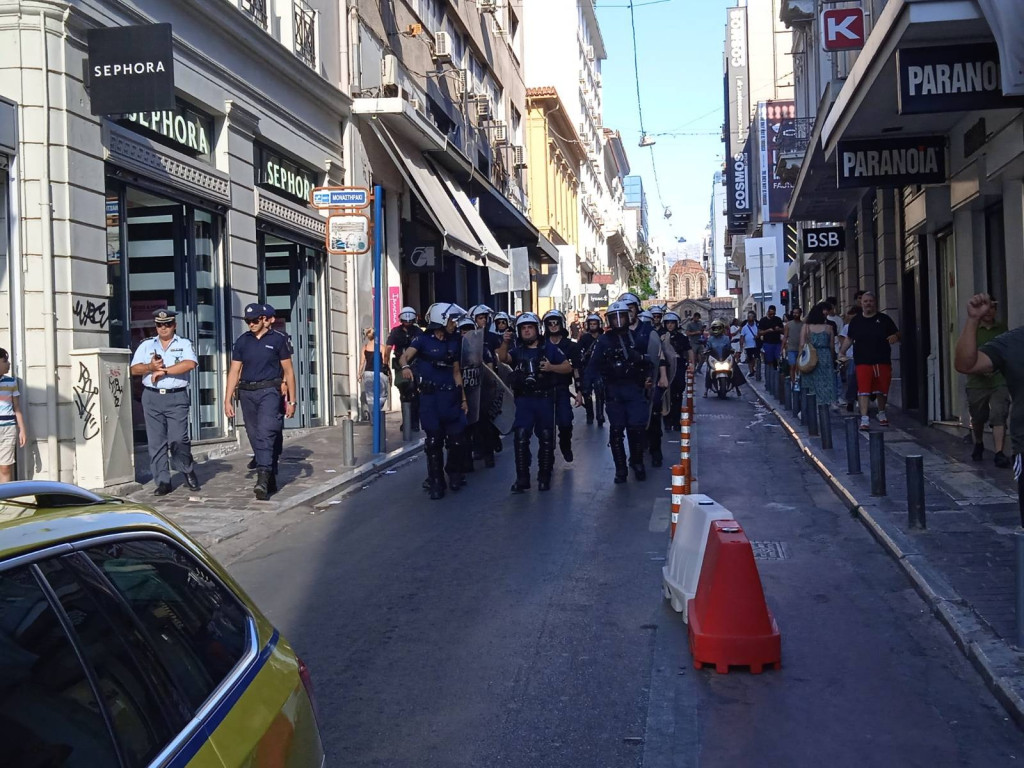 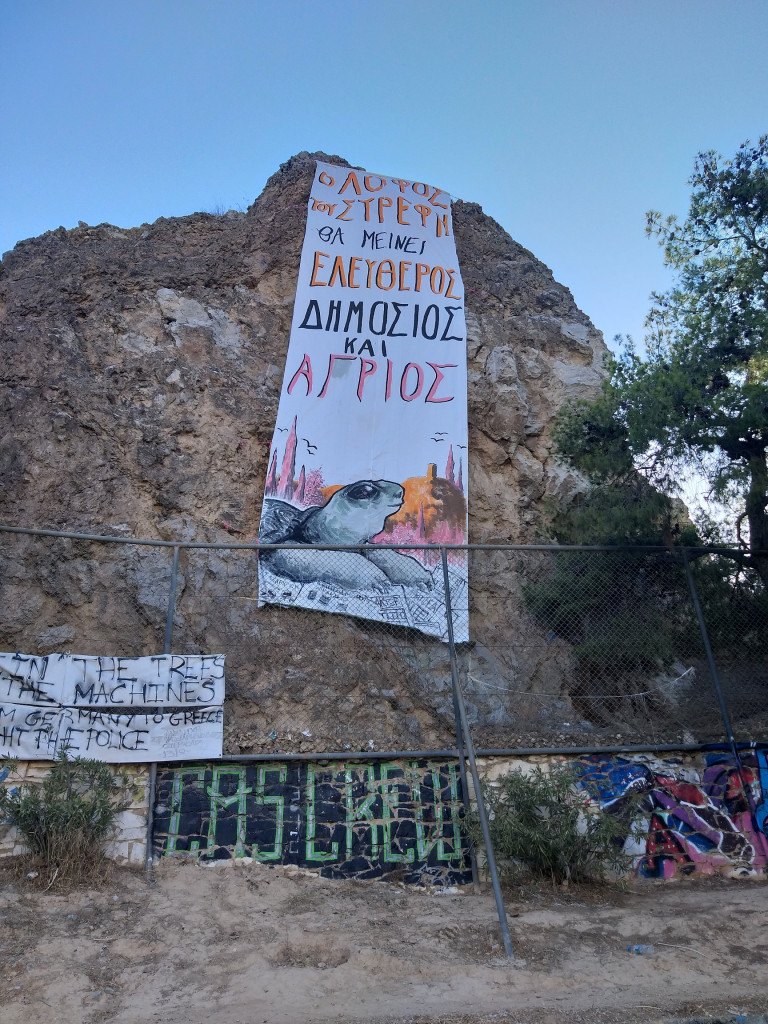