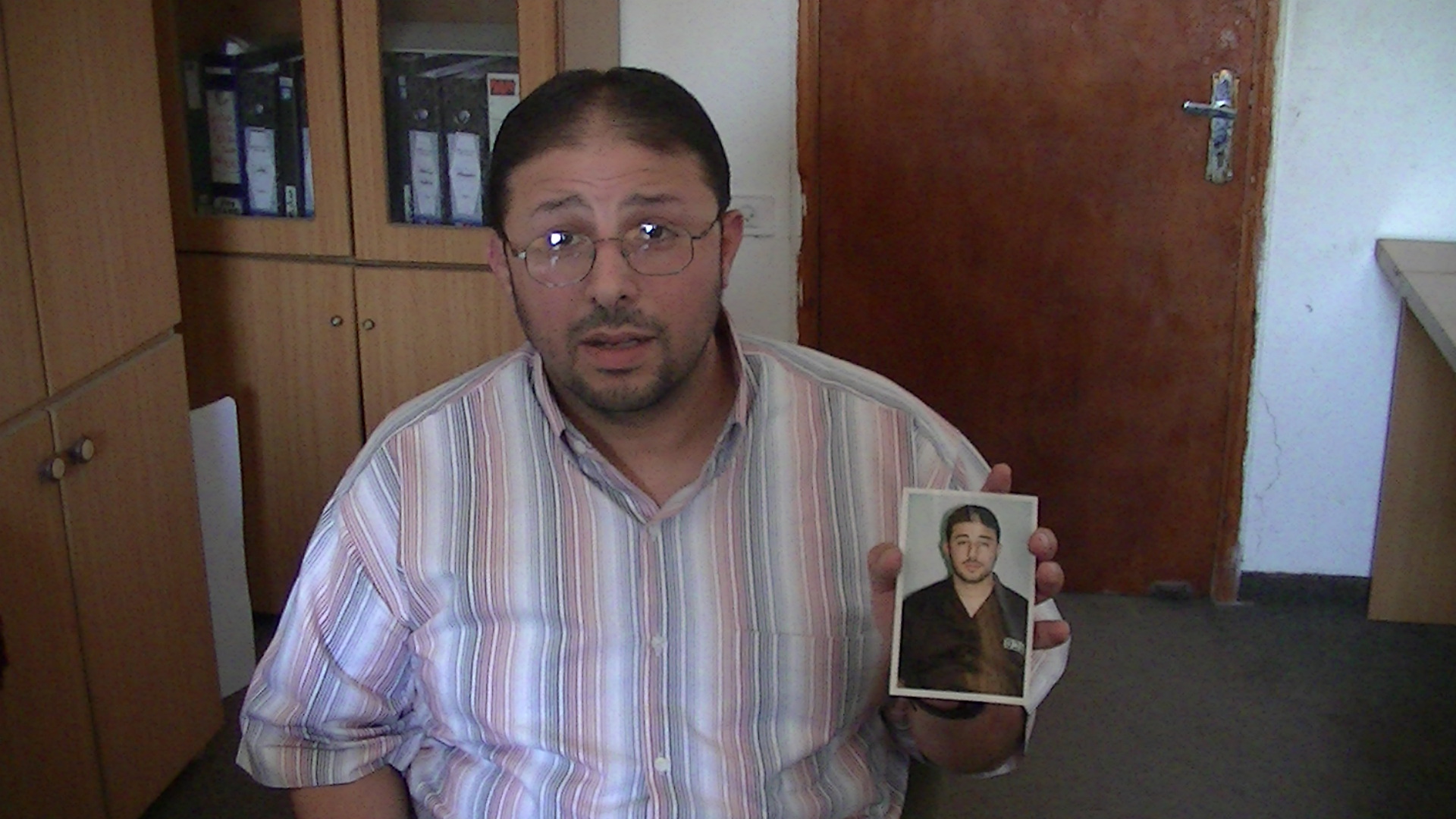 Corporate Watch has been investigating the companies involved in the Israeli prison system and interviewing ex-prisoners. This interview is part of a series of articles to be released over the coming months that we hope will serve as a resource for action against companies providing equipment and services to the Israeli Prison ‘Service’ (IPS).

Palestinian organisations are calling for action on 17 April, the international day of solidarity for Palestinian political prisoners, against G4S, a British-Danish multinational company working with the IPS, and the Bill and Melinda Gates Foundation, a major investor in G4S. Click here to find out more.

The Israeli police arrest Palestinians in the Occupied Palestinian Territories (OPT) and then transfer them to prisons and interrogation centres inside Israel’s 1948 borders, against the stipulations of the Geneva Conventions. According to the Addameer Prisoner Support and Human Rights Organisation: “Palestinians from the OPT are currently held in a total of four interrogation centres, four military detention centres, and approximately 17 prisons. While the four military detention centres are located inside the OPT, all the interrogation centres and prisons—except for one prison, Ofer—are located within the 1948 borders of Israel, in violation of international humanitarian law. The location of prisons within Israel and the transfer of detainees to locations within the occupying power’s territory are illegal under international law and constitute a war crime. The Fourth Geneva Convention explicitly states that “Protected persons accused of offences shall be detained in the occupied country, and if convicted they shall serve their sentences therein” (Article 76).”

According to the Hussam Association there were nearly 1,200 sick detainees. 24 of them were suffering from cancer and 170 were in urgent need of surgery. Addameer estimates that since 2000, 17 Palestinians have died as a result of medical negligence and the organisation has documented 178 cases of medical neglect.

Corporate Watch interviewed Akram Salameh in November 2013 at the government’s Ministry of Detainees in Gaza City. He had been arrested in Gaza and imprisoned in Israel for over 20 years. He was released in October 2011 from Ketziot prison in the prisoner swap that exchanged 1,027 Palestinian prisoners for the release of the captured soldier, Gilad Shalit.

G4S has been providing services to the Ketziot prison since 2007.

Akram had been a student nurse before his arrest. During his imprisonment he worked for 13 years as a representative for sick inmates at Ramleh’s infamous prison hospital. He told Corporate Watch:

“Before I was arrested I was studying nursing in Khartoum in Sudan. I was arrested while returning from university, coming through the Rafah crossing [from Egypt into Gaza]. I was accused of being a fighter for the Hamas movement and a member of Hamas. They did not accuse me of involvement in any particular Hamas operation but my party membership was used against me. I was sentenced to 30 years. I spent 22 years in prison in total in Ramleh [Ramla], Nafha, Shikma [Ashkelon], and Ketziot [all prisons inside Israel’s 1948 borders, click here to see a map].”

According to Akram, far from providing care to people who need it, the hospital simply goes through the motions of looking after the prisoners: “Legally when you have a prison you should have a medical centre. So the hospital is a cover they use in the courts, a facade of legality. The IPS gives basic treatment but seeing a specialist or having an operation may take years.”

Akram gives the example of a prisoner named Moatassem Raddad who “has been waiting more than four years years for treatment for intestinal cancer.” According to Akram this is one of the ways that the IPS goes through the motions of providing care while withholding life saving treatment. Akram tells us that patients are put on the waiting lists for treatment but never receive it. Moatassem “was promised an operation five years ago” but was still waiting in November 2013.

“I was a prisoners’ representative in Ramleh from 1997–2011”, Akram said. “I lived in the prison hospital which is a part of Ramleh prison. I was a point of contact between the Israeli prison authorities and the prisoners and I helped with things like translation. There are over 1,000 sick Palestinian prisoners and the majority of them are imprisoned in Ramleh. There are many prisoners there who are completely paralysed. Ramleh prison hospital has a floor set aside for Palestinian political prisoners.

“Ramleh prison is reliant on cameras. Cameras are all over the place and they have replaced the soldiers who previously had a much bigger presence there. Since 1994 you hardly saw any soldiers at all. The modern technology makes it more difficult for prisoners: the cameras see everything and microphones record everything. To get back to my cell from where I worked as a representative I had to go through 22 automated doors. At each door you had to speak to a soldier through a speaker system. If a prisoner placed his hand over the camera lens to get some privacy he would be punished.

“The prison is supposed to be a hospital but if a prisoner needs medical help the cameras cannot help him. If someone needed help I had to get the soldier’s attention by waving at the camera but if he is not looking then what can I do? We had many martyrs because of this.

Doctors can ‘switch in a second’

“When the prison doctor takes a round of the building he is accompanied by soldiers. The doctors can switch in a second to become soldiers themselves. It is very easy for them to attack or oppress the sick prisoners. Some prisoners are paralysed and it is difficult for the soldiers to strip-search them so they are strip-searched by the doctors.”

Akram showed us pictures of several paralysed prisoners who were regularly strip-searched by the prison doctors.

According to Addameer “primary obligation” of the prison doctors is “towards the State and the Israeli security apparatus, rather than the patient. Doctors working in detention and interrogation centres often fail to report incidents of torture and ill-treatment to the relevant legal authorities for fear of losing their jobs. Similarly, physical signs of torture and abuse are rarely reported in the detainees’ medical files, making it almost impossible for the victims to seek justice and compensation. Doctors also often advise Israeli Security Agency officers on the health condition of a detainee held under interrogation and as such, they become complicit in the practice of torture and physical and mental abuse.

There is no medical reason to conduct a strip search and in doing so doctors are doing the prison guards’ jobs for them. Conducting these strip searches of prisoners on behalf of the prison authorities makes doctors complicit in the imprisonment of Palestinian political prisoners in contravention of international law.

Prisoners released when close to death

According to Akram, “I think the IPS releases prisoners just before they die in order to avoid being held legally responsible for their deaths.” This was the case for Rabee Ali. Akram said: “I got to know Rabee because he was very ill and I used to support him by feeding him and taking him to the toilet.”

Mukarram Abu Alouf from the government Ministry of Detainees holds up two pictures of Rabee Ali, one before he was arrested and one on the day he was released. Rabee died soon after his release – photo taken by Corporate Watch, Gaza City, November 2013

“He was shot in the back during his arrest and had developed blood poisoning.” The Independent Middle East Media Center reported in 2008 that Rabee was being denied medical attention. He was given early release due to his condition but died a week after.

Another prisoner, Ashraf abu Dhra had muscular dystrophy. He was arrested in 2006. His condition quickly deteriorated while he was in prison. Akram said: “Ashraf was brought to Ramleh after his interrogation. Before he was in prison he was having regular physiotherapy. The doctors in Ramleh refused to do anything for him apart from feed him, clothe him and take him to the toilet and his condition got worse and worse.”

Akram showed us a picture of Ashraf before he was imprisoned and an emaciated picture of him on the day of his release. Physicians for Human Rights filed a request to the Israeli District Court for Ashraf to receive physical therapy and this request was granted. However, the authorities at Ramleh refused to give Ashraf the therapy he needed, saying that it was unnecessary. According to Akram: “He was released three to four months ago after serving his sentence. After one week he fell into a coma. He died 40 days after his release.”

In addition to the April 17 call for action action against G4S and the Bill and Melinda Gates Foundation, action has also been called for against Hewlett Packard (HP), a US based company that provides IT services to the IPS. According to Who Profits? HP holds a contract worth tens of millions of shekels to provide printers and maintenance of HP systems and central servers until 2016.

There is also an international call for action in solidarity with the Hares boys – five Palestinian teenagers from the village of Hares in the West Bank. They are currently imprisoned and are facing life sentences for attempted murder for allegedly causing a car accident by throwing stones onto a settler road. The boys deny any such charge and are reporting torture during interrogation. Click here for more information.

Another way to act in solidarity with sick prisoners is to support calls for the Israeli Medical Association’s expulsion from the World Medical Association over its complicity in Israeli militarism and apartheid. For more details see www.boycottima.org.

Click here for details of Palestinian Prisoner’s Day events in London and Manchester.