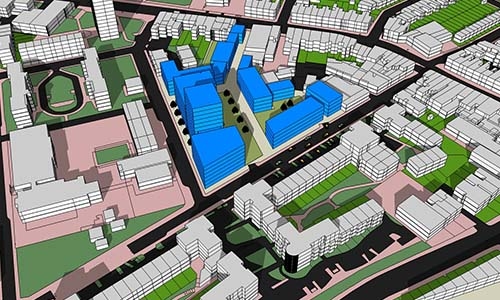 Besson Street in New Cross is the target for Lewisham Council’s first foray into the “private rented” market, working in a 50/50 joint venture with private developer Grainger PLC (see our profile here). Together they are building homes to rent at market levels, on the site of demolished council homes.

Lewisham has been eyeing the site to try out private rental development since at least 2015. In 2018, it chose Grainger as its partner, and the two registered a joint venture company called Lewisham Grainger Holdings LLP. According to Grainger’s website, the development will be owned by the new joint company, but Grainger alone will be in charge of managing the rented housing.

The majority will be rented at private market levels, with 81 at “London Living Rent”. This is an “intermediate” rent level defined by the Greater London Assembly. Set at roughly around two thirds of market rent, the GLA sees it is directed at “middle income households” rather than those on the council waiting list.

A planning application is expected in “Summer 2019“. Currently, the council/Grainger partnership is running local consultation meetings and has set up a “consultation portal” where people can place comments.

The scheme will also include a health surgery, office, and “outdoor gym” run by the New Cross Gate trust. This is a local charity which is backing the scheme and is involved in managing the consultation process. The trust was originally set up as the management organisation for the New Cross New Deal for Communities (see below). It is part-funded by the Council, and sees the scheme as a main source of its future income.

But what is the Besson street building site? On its website, Lewisham says: “the site is brownfield and has been lying derelict for the last 10 years.”

Like many official statements, this may be technically true, but also manages to hide some pretty important facts. Before it was demolished for a previous failed development scheme, this was the site of a public housing estate containing 69 council homes.

The homes were demolished in 2007 as part of the government funded New Cross “New Deal for Communities” regeneration scheme. The scheme planned a new “mixed use” development including a community cafe, library, gym and health surgery as well as housing. But then came the 2008 crash, and the plan collapsed due to funding problems. It has, indeed, been sitting empty since then.

Although the original New Deal scheme had many more community amenities than the new proposal, it was hardly ideal either. In 2008, the Greater London Authority (GLA) report on the “New Deal” plan criticised it for a loss of “social rented” units: just 41 were planned, as opposed to the 69 council houses demolished. The GLA warned it could recommend rejection of the development if this situation wasn’t improved. As the development collapsed soon after, that was never put to the test.

Now the new plan includes no “social rented” homes at all. In short, a pure loss of 69 council homes, without any mention or apology. The council seems to hope a ten year delay means no one will notice.

Why is Lewisham council becoming a private developer?

But what is a local authority doing getting mixed up going in the private development business at all? First, we should note that Lewisham is far from alone in taking this step.

In recent years, numerous councils in London and across England have been setting up new for-profit housing development companies. They were given the power to create these “arms-length developers” by a 2011 law called the Localism Act. By the end of 2016, according to a report by the Architects Journal, 98 councils had set up private development companies or were considering doing so – over a quarter of all councils in England. To clearly distinguish themselves from public housing, the companies often have corporate-sounding names like Red Door Ventures (London Borough of Newham), Brick by Brick (Croydon) or WV Living (Wolverhampton).

The big driver behind this trend is that councils can use these companies to borrow money on private markets. Since the 1980s, both Conservative and Labour governments have imposed strict controls on public borrowing, and particularly on local authorities’ finances. This attack on council spending was initially pushed with Thatcherite rhetoric about “private sector efficiency”. That line may seem hardly believable nowadays, but the recent focus on “austerity” economics has a similar impact.

Far from traditional council housing, the houses these companies build are typically for private sale or rent at market levels. The argument is that councils can plough the money they make from private developments back into “social housing” and perhaps other public services. This is how Lewisham explains the Besson street scheme in a post on its website:

“As a private development, this project will provide us with a long-term, sustainable and reliable income stream. This income will help us to:

However, there’s little to confirm whether any of this money will ever make it to pay for social housing – or other “essential services”. One thing to flag up: of the 15 development schemes we have surveyed in New Cross and Deptford, not one involves any actual “social rented” housing at all. The council may claim it’s still committed to building “social” homes – but somehow, they always end up being promised somewhere else.

All this shows that instead of tackling the housing crisis, as they claim, Lewisham and other London councils are in practice accelerating the gentrification of London’s neighbourhoods.