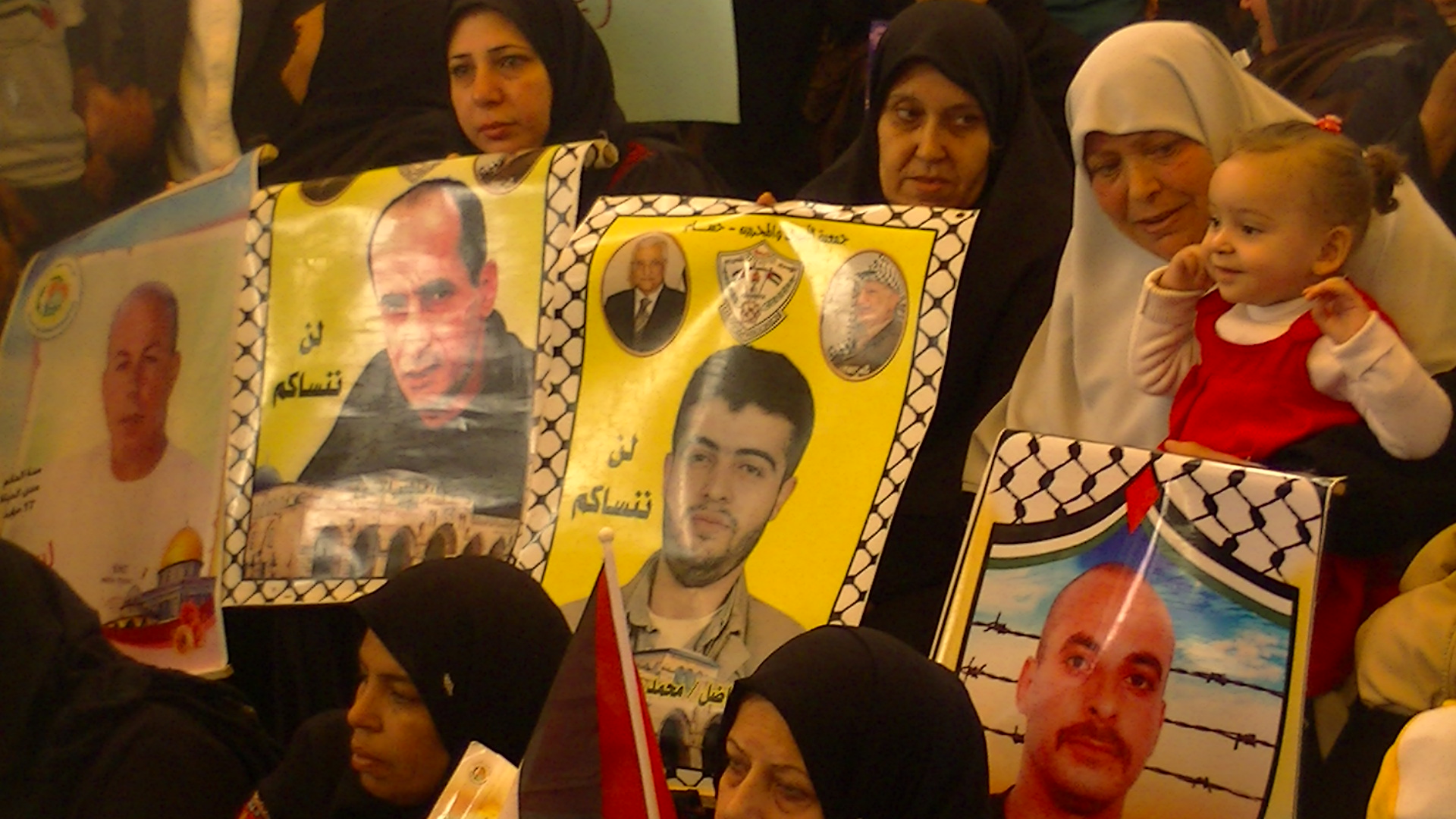 We visited Fatima Al Zak in her home in Shuja’iyeh, a neighbourhood in Eastern Gaza City, in November 2013 to hear about her experience of giving birth and trying to bring up an infant in an Israeli prison. Fatima is one of many Palestinian prisoners who have been denied proper medical care while in prison.

Eight months after our visit, Shuja’iyeh was one of the most devastatingly bombarded areas during Israel’s ‘Operation Protective Edge’ attack in Summer 2014.

Fatima used to be a women’s organiser for Islamic Jihad, but since her release she has been working as an independent activist on prisoners’ rights issues.

Throughout our meeting Fatima appeared open about the circumstances surrounding her arrest, as well as clear about the abuses she and her new-born baby suffered whilst in Israeli detention.

She was arrested inside the Erez checkpoint in 2007, while travelling from the Gaza Strip into Israel’s 1948 borders. In her words she was on the way to “do an operation inside Israel”. She had been told it was to be an Islamic Jihad suicide bombing targeting soldiers and army recruits inside a bus station. She had obtained a permit to cross the checkpoint for medical treatment and left her husband and eight children in Gaza, but when she got there she was intercepted by the Israeli military and charged with attempted murder.

Once detained the Israeli soldiers asked her to take off her hijab and took her to a separate room to be searched by a body scanner before she was handcuffed, blindfolded and transferred to an isolated cell for initial interrogation. “The first interrogation lasted around two hours”, Fatima told us. “They tried to blackmail me by saying that if I co-operated and gave them information they would not arrest me but just send me back to Gaza. They asked me about other people involved in the operation but I did not give them any information and just kept smiling”. During this time the interrogators had her phone and kept threatening to arrest her children and her husband if she did not talk. She could hear her phone ringing over and over again and was told that the calls were from her son.

After the initial interrogation at the checkpoint, Fatima was taken to a detention facility in Ashkelon prison where she underwent a medical examination and was asked if she was pregnant. She said that she did not know and asked for a pregnancy test. “After kicking up a fuss I was eventually given one”, Fatima said. “It was an immediate test but I was not given the result until two days later. I don’t think they asked about the pregnancy for medical reasons but to find out a prisoner’s weak point”. Fatima wanted to stay defiant and went on hunger strike, refusing to take their food.

Fatima was kept in Ashkelon for 21 days. Despite her condition, she was put under brutal interrogation for extended periods of time, jeopardising the health of her unborn baby. She told us that she was handcuffed and blindfolded when taken to the interrogation room, and once there the interorgators removed her blindfold and kept her on a small metal chair, often with her hands cuffed behind her back. Sometimes the handcuffs were attached to leg cuffs so that she could not sit upright. She was only allowed to leave to pray, and sometimes not even then. “I was only taken to my cell rarely, for a few minutes, and was deprived of sleep”, Fatima said. “This very intense interrogation went on for one week and I did not talk at all”.

After a week Fatima called the interrogators from her cell and told them that she had something to tell them. “They thought I wanted to confess and made a great atmosphere for me, brought me snacks and restaurant food to tempt me to eat for the baby. I told them that “I left eight children and one granddaughter. I left all my friends in Gaza. I left a good position of work […] I was prepared to leave all this and do the action because of the daily killings and demolitions in Gaza. My punishment comes from God, not from your prisons.” She refused to give them any more information.

When the interrogators realised that they could not get any detailed information out of Fatima, they changed tactics. They put someone in Fatima’s cell, who she is convinced was a collaborator, whose job was to get her to talk. Collaborators are commonly used by the Israeli army to extract information which is then used in prosecutions.

When two young boys were put in a cell next to her, Fatima wanted to give them advice. She warned them not to trust anyone and not to talk or confess to anything they were being accused of. She thinks that triggered what happened next: She told us that the Israeli guards came to her cell in the middle of the night and handcuffed, blindfolded and spat at her. She was told that she was being taken to the ‘dog house’ to die. This turned out to be a small cell about one point five times one metre, with no air circulation. The cell was very dirty and full of insects that bit her. There was just a thin mattress on the ground. During the first three days of her time in the ‘dog house’ she had to undergo lie detector tests for eight to twelve hours a day, where she was presented with profiles of other people and continuously asked for information about them. Fatima told us that she was regularly beaten during interrogation. “Every minute in that cell was like torture”, Fatima told us. “Two days after being moved there I started to have bleeding, and I thought I was losing my child, which was what they wanted. As this was happening they were mocking me and laughing at me. I was there for one week”.

Up until this point Fatima had not had access to any lawyer or outside help, but on day 18, after her bleeding, she got a visit from the International Committee of the Red Cross (ICRC) and got to see a lawyer for the first time. The lawyer appealed to the high court to allow her to go to hospital and on day 21 she was finally moved from Ashkelon. The court had ruled that she should be taken straight to hospital, but instead Fatima was transferred to Ha’sharon prison near Netanya. Finally, 12 days after the move, she was taken to a hospital and was given an ultrasound scan to check on the baby’s health.

Fatima told us that after that she at least got regular check-ups at the prison and was allowed to visit the hospital. But life was far from easy or suitable for a pregnant woman. After her first visit to the prison physician, he asked that in future she should be shackled when she was brought to see him. After that she had to wear hand and leg cuffs to her visits. She also experienced being shackled at the hospital: “Around a week before the due date I had strong delivery pains and was taken from the prison to the hospital in Kafr Saba”, Fatima said. “The pain disappeared but then the same thing happened a week later. Both times I was kept chained to the delivery bed and was arguing with them to unchain me”. She made a complaint to the ICRC to argue her right not be shackled whilst giving birth. After that the the general director of the prison came to see her and said that they would let her deliver the baby unchained but that she would be cuffed straight afterwards. She was denied her request to be allowed to have a family member with her during the birth.

The delivery itself took four hours but was hard as Fatima was denied any pain relief until just at the last minute, after a lot of cursing. “The doctor who refused it kept saying that I was a terrorist and that I was going to deliver a terrorist. Even the guards that came with me to the hospital were shocked at the treatment I received”.

The baby, named Youssef, was born on 17 January 2008. Fatima only got to see him for a few minutes before he was taken away and she was shackled again. During the three days she stayed in hospital she was allowed to breastfeed him, and see him, for just 10 minutes, three times a day, with the rest of the feeding being done away from her.

After three days Youssef came back with Fatima to Ha’Sharon prison, where mum and son were kept in a cell with three other women. Youssef spent the first 21 months of his life behind bars. The prison authorities did not allow any clothes or toys to be brought in for him from the outside and just once they allowed her to buy him a small toy car from the prison shop. They also stopped allowing baby milk in for him, which he needed as Fatima was not getting enough good food to be able to breastfeed him properly. After this stopped, Youssef got really ill with the flu and had to be taken to hospital with a weakened immune system.

Despite these hardships, the most difficult thing, Fatima said, was the lack of stimulation and other children to interact with in the prison. There was one other small child there, Ghada Abu Omar, daughter of Khoula Zitawi, a prisoner from the West Bank. “Youssef and this girl were great friends and he cried a lot when she left”, Fatima said. “When Ghada and her mum were released he had no other child to play with. The only other place he saw other children was at the hospital. He used to run up to them and want to talk but, as he was with a shackled detainee they always ran away from him or were not allowed to play with him by their parents”.

Fatima and Youssef were released as part of a deal where twenty Palestinian female prisoners kept in Israeli jails were released in exchange for a video of the then captured Israeli soldier Gilad Shalit in October 2009.