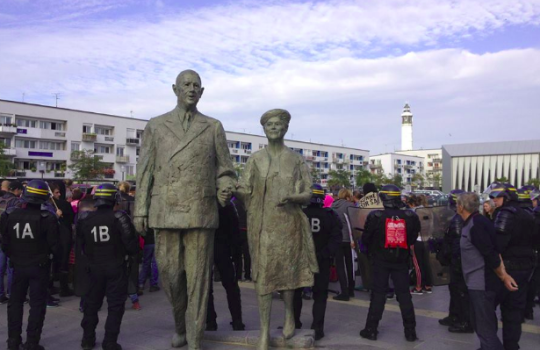 One year after the Jungle eviction, the hunt against migrants in Calais is as vicious as ever. People keep arriving, hoping to cross the channel to the UK. They are now met with a zero tolerance policy: shelters destroyed, demonstrations broken up, people rounded up in the streets, as deportations are scheduled to vicious states like Sudan, and the death count continues to mount. These days even charity food distributions are being targeted by police and dispersed with tear gas.

The calaisresearch website is a collaborative project to gather and analyse information about the Calais border. Formed by members of Calais Migrant Solidarity, Corporate Watch, and Passeurs d’Hospitalités, its first publication in 2016 was a list of 40 companies profiting from the jungle eviction and other border violence. The site’s aim is to help those fighting for freedom of movement in Calais develop effective strategies.

To do that we need to understand what we’re up against: the decision-makers and deals that create the Calais ‘Border Regime’. Most obviously, the orders come from the UK and French governments. But there also other important players, including the business interests which govern cross-border trade. The latest section of the calaisresearch site maps these key decision-makers, with another new page cataloging the security funding deals announced since 2009.

First, the two states: the French and UK governments and their security forces. The securitised border is a direct result of the “juxtaposed controls” agreement, first signed as the Channel Tunnel was being built in 1991. This offshores the UK border to French soil in order to stop refugees claiming asylum in Britain. To keep the deal going, the UK has given millions in funding to France, as well as directly to private contractors, to create a militarised death-zone in Calais.

Second, local power players: Right-wing Mayor Natacha Bouchart has staked her political ambition on a personal campaign to clean Calais of migrants, flirting with far-right vigilantes in the process. And now she has support from the right-wing takeover of the Regional Council, a major local landowner.

Third, corporate interests: Eurotunnel and the Port of Calais are allies in lobbying for extreme security measures – but also fierce competitors for cross-channel trade. The Port is now run by a semi-private company embarking on a major expansion programme, whose majority shareholders are the local Chambers of Commerce. The freight industry, with its trade associations, also has a stake in shaping the key problem facing the Calais border regime: how to stop human beings moving freely, but without slowing the profitable trade in commodities.

For over 20 years now, Calais has been a focal point for migration struggles in northern Europe. It will be so for as long as wars, dictatorships, and environmental destruction drive people to risk their lives at the border. Movement will not stop, and neither will resistance.

So the calaisresearch website will be a continual work in progress. It hopes to make a small contribution to the fight today and tomorrow, helping us share our knowledge and inform our strategies. It will keep on being updated with new information and analysis as the struggle develops.

If you have any useful information about the border at Calais please get in touch: calaisresearch(at)riseup.net.