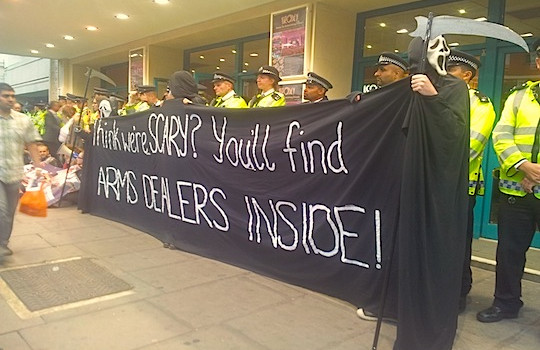 Anti arms trade activists who have been taking a prosecution against Magforce over the marketing of electric shock batons at the DSEI arms fair have been forced to discontinue their case.

The Arms Dealers on Trial campaign has issued the following statement:

“Following a private meeting in recent days between lawyers for Arms Dealers On Trial and senior staff at the CPS, we have been made aware that we may no longer continue the private criminal prosecution of two arms companies (Magforce International and Tianjin Myway International) who promoted torture weapons at last year’s DSEI arms fair in London, contrary to UK arms export laws. A court had previously granted us permission to proceed with the private prosecution and a trial had been anticipated later this year.

We are appalled that the case has been discontinued. However, it proves our point – the commercial trade of arms, which causes unimaginable human suffering and tends to devastate the natural environment too, is legitimised, facilitated and rewarded by the authorities and our Government.

Even though:
• there was a strong prima facie case against the arms companies for having promoted torture equipment for sale at the arms fair, and
• the facts of the alleged offences are well known, following a high profile intervention in Parliament by Caroline Lucas MP who presented evidence that crimes had taken place, which led to the arms companies being thrown out of the fair, and
• there had been a detailed investigation by the Independent newspaper, and coverage in lots of other media, and
• refused freedom of information requests to HMRC and the Metropolitan Police about the investigations into breaches of the law at DSEI, and
• numerous representations made to the CPS, HMRC and Ministers by our lawyer asking them to investigate this matter;

neither the CPS, police or HMRC took steps to make the arms companies accountable. The CPS admitted that no investigation of the arms companies had taken place by either themselves or HMRC and that even if it had the outcome would have been no more serious than ‘a slap on the wrist’.

A report by Amnesty International found that the weapons could be used for crimes against humanity – torture. In terms of the human suffering these weapons are manufactured to cause, it could hardly be more serious. This is grotesque hypocrisy from our Government which tries to present itself as a defender of international human rights standards.

The CPS chose to communicate their position outside of the six month deadline for any public prosecution to be commenced. Legal representatives had repeatedly requested from the outset that the CPS commence their own proceedings against the two arms companies. In circumstances where the State (which jointly hosts and heavily subsidises the arms fair) will not act, and others may not act, the arms dealers are entirely unaccountable for their actions, since there appears to be no effective legal mechanism to prevent the promotion for sale of illegal torture weapons.”

“Time and again cluster munitions and torture eqipment have been advertised illegally inside the DSEI arms fair, and yet the State have never made any effort to apprehend or prosecute the offenders; preferring instead to try to suppress the protests outside. Given the State’s protection of the arms industry and lack of any meaningful accountability it is left to ordinary people to stop the arms fair by taking direct action against it.

It has been our ongoing position that the arms fair must be opposed by all means. The DSEI arms fair returns to the Excel Centre in 2015. We will be there to stand against them and we will not rest until the arms fair has been shut down for good.”

Their lawyers have commented here: http://www.hja.net/news/press-releases/criminal-defence/private-prosecution-against-arms-companies-dsei-arms-fair-comes