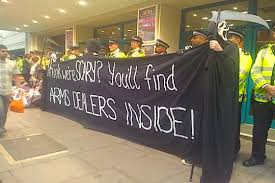 This week the Crown Prosecution Service (CPS) discontinued a case against five activists charged with disrupting the Defence and Security Equipment International (DSEi) arms fair. Here is a personal account from one of the defendants:

“Next week myself and four other people were due to be on trial for taking action at the DSEi arms fair. This week we found out that they have decided to discontinue our case. Although it’s a relief not to have to go through the trial process, deciding to discontinue it because it’s ‘not in the public interest’ shows the court’s reluctance to deal with the real criminals – the arms companies that have been committing crimes at DSEi’s arms fairs since 2005.

On 8 September I spent over four hours locked into two metal arms tubes -disguised as missiles- and connected to two other people. We were blockading one of the access roads into the Excel Centre the day before a one-day drones conference and then the DSEi arms fair was due to start. At the same time, some activists were at the other road entrance, under a lorry to stop it from entering the site. Most of us were charged with ‘obstruction of the highway’, and pleaded not guilty on necessity grounds – we were going to defend our actions because we did them to avoid injury and death to another human being. The DSEi arms fair brings together thousands of arms companies and invites the world’s most repressive regimes to shop for weapons. We thought that stopping its set-up would be the most effective way of trying to disrupt the arms deals that were due to take place that week.

In 2011 and 2013, arms companies have been ejected from DSEi for displaying illegal weapons, but this was not a result of proactive action by Clarion Events – the company that runs the fair – but rather because it was forced to act following exposés by journalists and Members of Parliament. During the same period the government has also failed to either investigate or prosecute these crimes to prevent them from happening in future.

We have spent the past few months seeking disclosure about the extent to which the government knew about the sale of illegal weapons at the arms fair, and whether any relevant investigations into this case were taking place (see our Freedom of Information requests here and here for example). To our knowledge, there are none. An expert opinion from Amnesty International, stated that “to my knowledge there have been specific breaches of UK arms export control legislation at every DSEi fair since 2005” and “Repeat failings to prevent the promotion of illegal items at DSEi defence exhibitions clearly demonstrates serious failings in the capacity of the UK government to enforce its own laws in this area”. It seems they would rather discontinue our court case than be forced to answer our questions.

“Whilst it is welcome that the case against our clients has been dropped, the real issue is why these arms companies have been allowed to act with impunity – We have written to the CPS, HMRC, Attorney General and the Home Secretary to demand why those that promote these unlawful weapons aren’t being prosecuted – total policing does not seem to apply if you are an arms dealer.”

The CPS’ decision follows a not guilty verdict on 4 February for five Christian activists who blocked access to the fair on its opening morning. However, it is expected that a case against two people who refused to leave the road to allow access to the arms fair at the same protest on 8 September will go ahead on 25 February.

For more details about the campaign see www.stopthearmsfair.org.uk/

Obviously the problem with the DSEi arms fair is the arms trade itself, and not just the illegal weapons were on display, but these cases demonstrate the government’s priorities and its complicity in fuelling torture and conflict.

The arms fair is currently set to return in 2015, and it will once again bring together repressive regimes and fuel conflict and human rights abuses. The real celebration will take place when the DSEi arms fair is shut down for good, and the government shifts its priorities and starts funding education, health and welfare instead of war.” Read the defendants’ collective statement at: www.stopthearmsfair.org.uk/on-trial/charges-dropped/