In December 2021, Choose Love cut funding to charities offering vital support to refugees and migrants in Calais and Dunkirk. Despite high-profile celebrity endorsements and an incredible capacity to raise millions for refugees, behind the scenes, all was not as it seemed at Choose Love.

A Corporate Watch investigation revealed Choose Love’s relationship with an organisation called Prism the Gift Fund. Prism runs “collective funds” for charities like Choose Love and takes 2% of their income for doing so. Prism also manages donation funds for rich people, who want to give to charity without the trouble of setting up their own private foundations (while still maintaining the “tax benefits” from charitable giving, naturally).

The last available financial report (2020) showed Choose Love raised £11.8 million and spent £9.7 million. Just over £1 million went on programmes in France, with more than £5 million in Greece, £1 million in the UK, £617,000 in Syria, and smaller amounts in another 13 locations around the world.

A year later concerns about the charity highlighted in our investigation haven’t gone away. Former Choose Love employees recently contacted us with this open letter documenting their experiences.

In 2021, we wrote this letter from our hearts. Since then – from the outside at least – we can see many changes at Choose Love. New policy documents, new names, new faces. But we wonder how deep those changes go and those of us who wrote this letter still feel it’s important that our voices are heard.

We didn’t want to have to write this. We believe in your mission, and we believed in the organisation. We threw our hearts and souls into our work to support it. But become clear that for all your calls of ‘love and justice’, your senior leadership team acted in direct opposition to the organisation’s values – and we felt we had to speak out.

This was, from the start, an organisation that thrived off of the extraordinary efforts of ordinary people. Thousands of individuals who together, with little resources and a lot of heart, gave everything they could – their time, their clothes, and what funds they could spare – to support displaced people. Your talent and hard work is not omitted here. Most notably perhaps, your skill in running PR campaigns and bringing kind, well-meaning A-list celebrities into the movement to mobilise the British public. Choose Love was in the right place at the right time to channel that incredible grassroots response.

But somewhere along the way, you forgot what you were fundraising for – and where the funds came from. Your relentless drive for growth and expansion, set against a backdrop of paranoia and ego, has continually come at the expense of your staff’s well-being, and often the well-being of the people your organisation exists to serve.

From openly badmouthing volunteers; disbanding your staff’s well-being team in the middle of the pandemic, to grievances being reviewed by friends of people in power rather than an objective board. This is on top of cutting funding from projects without sufficient explanation or support for them to find alternatives – for an organisation that talks about humanity, many of us feel this trait is often sadly lacking in the organisation’s leadership.

To those people at the top of the organ, we think it’s important to speak directly to you.

You were ultimately responsible for creating this toxic work culture. Many people continue to feel bullied if they disagree with your approach. Any feedback on how to improve the organisation is treated as a personal insult.

The biggest shared experience for former staff and volunteers is one of fear. Fear of speaking out. Fear of being bullied. Fear of being ostracised. Fear to question the total lack of transparency in decision making, fear about highlighting even clearly erratic leadership decisions, and for many of the projects you financially support, fear of losing funding for vital work protecting refugees.

Former staff and volunteers share a feeling of having been utterly disposable. Having been exhausted of what we joined Choose love to offer and thrown aside. Having stopped to question inexplicable management decisions (almost always made by individuals at the top) only to find you’re frozen out. Now, where is the love in that?

One year ago, the Times reported on credible rape allegations made by a former Choose Love employee. The survivor was left further traumatised not only by charges of defamation by her alleged attacker but also the way the investigation was handled by Choose Love and Prism. In response to that story, a statement from Prism claimed that: “In the six years we have worked with Choose Love, we have not received a single report or complaint about its culture or leadership”. This is because our complaints went unheard and it was nearly impossible to raise concerns about leadership without fear of retribution.

We wish we could say more, but it’s this fear that means we don’t feel comfortable listing more specific examples. We’ve seen your readiness to involve expensive corporate lawyers when a scandal risks breaking. We know we can’t compete with this.

We hope it’s enough to say that a significant number of people have reported suffering mental health issues as a result of working at Choose Love. You’ve been told time and time again to protect staff and volunteers from burnout, only to carry on with business as normal. It simply isn’t normal – or right – in the wake of Choose Love’s meteoric success, to have such large numbers of people feeling wronged, burnt out, depressed and afraid. In the last year alone, too many people left because they felt pushed out and unable to work in such a toxic environment.

None of us feel safe signing this letter, and we ask you to respect our anonymity. Whether it’s our references ruined, projects we are associated with no longer receiving funding, or your readiness to involve aggressive lawyers. Some ex-staff felt too fearful to be involved, even anonymously, as they feel they’ve been gagged. But believe us when we say that the feeling of disappointment and sadness about your lack of love is shared by large numbers of people.

Now is the time for genuine, meaningful change at Choose Love – and we mean more than just opaque independent reviews with outcomes no staff are allowed to see (this has happened twice already).

We want to see a commitment to proper accountability and transparency in all aspects of the organisation, support for the team to unionise – and a genuine apology for everyone who has been ground down, burnt out and treated as disposable. It’s the absolute minimum we should expect, and yet we still don’t actually expect to see it. We hope we’re wrong.

With a new, kinder, more experienced leadership team, it is time the organisation truly earned its name.

IF YOU WANT TO SEND MONEY TO NORTHERN FRANCE: 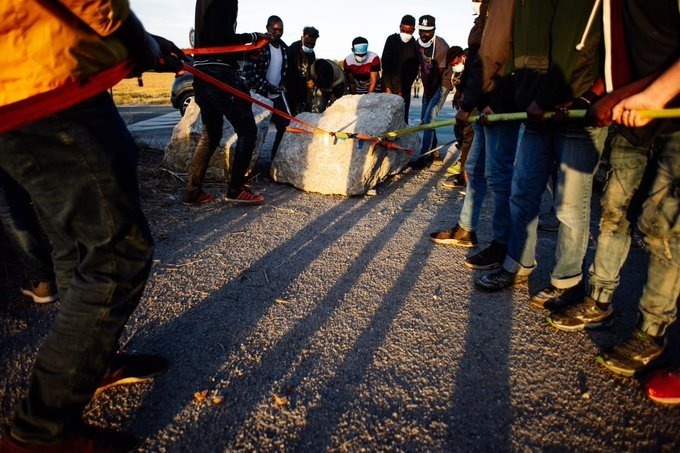 The Calais Migrant Solidarity network has been active in Calais since 2009, practising solidarity not charity. Watch the Channel shares sea safety information and monitors the UK and French authorities “to ensure that the coastguards fulfil their duties under international maritime law to rescue people in distress.” It doesn’t have its own bank account but donations can be sent via CMS.