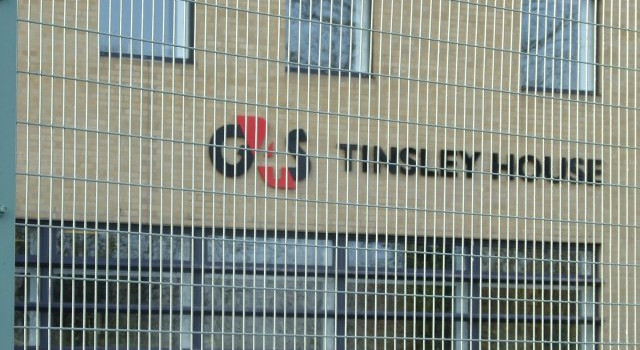 Since it opened earlier this year, the UK’s newest and biggest immigration prison has barely had a day without trouble. However, Corporate Watch has learnt that conditions at Brook House have become “much worse” lately, both for the detainees and for their visitors. Meanwhile, the G4S management is apparently recruiting new security guards as staff shortages have led many detainees to repeatedly miss doctors’ and court appointments.

Brook House was opened in March 2009, located about half a mile from Gatwick’s other detention centre, Tinsley House, on the south perimeter of the airport. With 426 bed spaces for single male detainees, it was the UK Border Agency’s latest step in its plans to expand Britain’s detention estate by 60 percent. The purpose-built, category B prison is run on behalf of UKBA by private security giant Group 4 Securicor (G4S), which recently acquired the original contractor Global Solutions Ltd (GSL) (see this Corporate Watch article for more details).

In September 2007, while Brook House was still under construction, the No Borders UK network organised a protest camp near Gatwick in protest against the new immigration prison. Various demonstrations took place during and around the camp, including a mass demonstration on 22nd September, which saw some 500 people marching from the town of Crawley to Tinsley House, near the building site of Brook House. A campaign was subsequently formed by campaigners and local residents to try to stop the construction of the detention centre, but the plans went ahead regardless.

As soon as Brook House was opened, detainees in adjacent Tinsley House went on hunger strike over the new food system, as meals were now cooked in Brook’s kitchens, then brought down the road to Tinsley. This meant that breakfast was reduced to two pieces of toast and one egg, which detainees were not happy with. They now also had to order their evening meals 48 hours in advance and the portion sizes became much smaller (see here).

A number of visitors have separately told Corporate Watch that security measures at Brook House have increased significantly over the last couple of months. For instance, the windows in the reception area have now been covered; searches on entry are much more thorough than before; and visitors are no longer allowed to take toiletries and other items in with them as they used to be able to. The centre’s management claims this has been prompted by alleged drugs smuggling; others said it might have been related to recent fights between inmates.

A new sign at the entrance to the reception area last week threatened visitors: “15 visitors have been banned from visiting; don’t be the 16th.” The number has now gone up to 28, in what appears to be, as one visitor put it, “a terror campaign against visitors.”

Again, the centre’s management claims that the repressive measures are due to “inappropriate behaviour” and cases of drugs smuggling. However, visitors have in the past been banned from detention centres for ‘making a fuss’ or protesting against arbitrary rules imposed by the management or security guards. Visitors from the SOAS Detainee Support Group were banned from visiting Yarl’s Wood in July for being ‘confrontational’ after they complained about waiting for too long. Anti-deportation campaigners who took part in a blockade of Colnbrook detention centre, near Heathrow, in May were also banned from visiting adjacent Harmondsworth. For detainees who do not have any other connection with the outside world, this could have devastating consequences.

To visit someone in Brook House is “becoming a nightmare,” one visitor describes. “You need to make the booking at least five-six days in advance now.” The reason for this, given by the centre’s management, is that the waiting room is apparently too small and “cannot cope” with the number of visitors. For solicitors and relatives of detainees due for imminent deportation, this could mean they are never able to see their relative or client again. They are in effect denied a last meeting.

“You would have thought that the biggest detention centre in the UK would have a bigger visiting area,” adds the visitor, who preferred to remain anonymous. “But there you go, cost-efficiency seems more important than making sure they provide enough space for visitors.”

Other visitors, however, argue that the visiting room is rarely full and that this is “just an excuse for the management to limit visits as some sort of punishment.” In one case, a man wanting to visit his brother, who had been taken to Brook House the previous day and was due to be deported the following day, was told that “the place was full” and that he “could not visit.” Other people visiting that same day testified that the visiting room was not in fact full.

As noted above, Brook House visitors are now not allowed to take any toiletries or tobacco in for detainees as they used to until about a month ago. The management claims this is to prevent suspected smuggling of drugs into the centre and says the decision was taken by the UKBA and had nothing to do with them. However, some detainees said it is aimed at “forcing them to buy” these items from the centre’s shop.

“So if you don’t have money and don’t have visitors who can give you cash,” one detainee complained, “you are basically deprived of these essentials.” Many visitor groups have rules against giving cash to detainees.

Unlike prison canteens, which are usually subcontracted to other companies, Brook House’s shop is run by G4S itself, which claims that profits made through the shop are ‘reinvested’ in the centre. It is also no secret that, besides making profits, prison canteens are used by prison managements for punishment and disciplinary purposes (see this Corporate Watch article for more details).

In one case, a detainee with serious medical problems missed two hospital appointments in a row due to “lack of staff,” as he was told. Another detainee had his court hearing cancelled twice because there was “no transport available.” Of course, there are more than enough escorts and transport available when it comes to deportations – on the first mass deportation flight to Baghdad, Iraq, on 15th October, there were at least 100 escorts and security guards to accompany 43 deportees. Brook House has a couple of its own vans for transporting detainees and G4S is the UKBA’s main contractor for detainee escort services.

Interestingly, G4S, employer of around 40,000 people around the world, was earlier this month advertising in local papers for ‘detainee custody officers’ vacancies at Brook House. Call 0844 891 3333 to discuss the nature of the company’s work…. Bear in mind, though, that some G4S security guards at Brook House are apparently working up to 15-hour shifts, from 6am to 9pm.