Photo caption: Workers at a honey cooperative near Wan (Van in Turkish). The Co-op was set up with the help of the Democratic Society Congress economic commission.

By Eliza Egret and Tom Anderson

Democratic autonomy is a movement which aims to establish a network of grassroots assemblies in Bakur (the Kurmanji Kurdish word for the area of Kurdistan within the borders of Turkey). We carried out interviews with several of the organisations involved in the process of democratic autonomy in June and July 2015.

For a critical introduction to the PKK and Democratic Confederalism in Kurdistan see here. For an in depth look at the social movements in Bakur see our new book, ‘Struggles for autonomy in Kurdistan’.

The Democratic Society Congress (DTK), set up in Bakur in 2007, acts as an umbrella organisation, and aims to establish democratic confederalism in Bakur. It meets every three months and is made up of representatives of different ethnic groups and political parties as well as representatives of local assemblies. It operates as a parliament, and attempts to create a new society under the weight of repression from the existing one. Since the establishment of the DTK, local assemblies have been set up all over Bakur. The DTK has also set up regional commissions to deal with issues such as ecology, economy, education, language, religion, culture, science, diplomacy, women and young people. 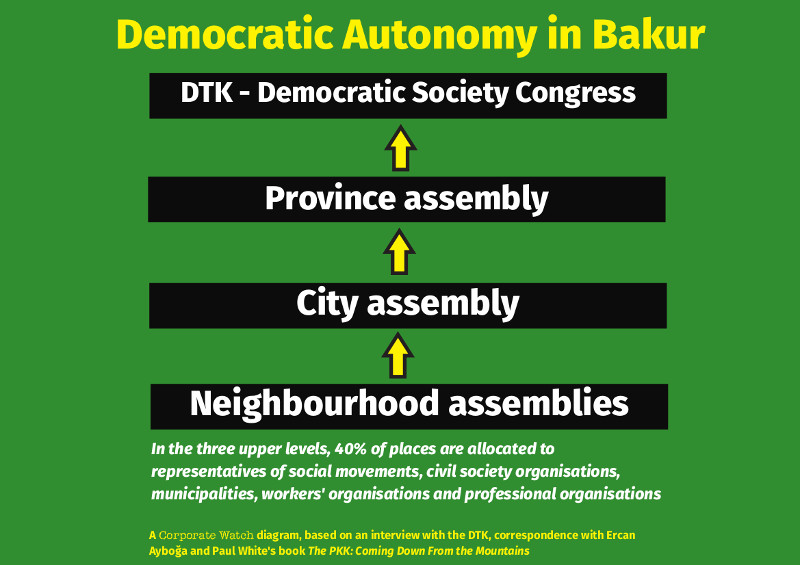 We interviewed Hilmi Aydoğdu and Hasan Hüseyin, both directors of the DTK in July 2015.

Corporate Watch: Can you tell us about the structure of the DTK?

“The DTK is an umbrella organisation which includes political parties and different organizations in North Kurdistan. Its aim is to build a new society in Kurdistan, a way of organising ourselves and also to practice how democratic autonomy will be in the future.

The DTK includes unions, workers’ organisations, political parties, people with different beliefs, and those who are Armenian, Assyrian and Arabic, for example.

In the DTK the delegates have to be 50% women. This is an obligation. And there has to be a female representative in every part of the DTK. We have two representatives for each role, a man and a woman.

There are 14 different commissions of the DTK: ecology, economy, education, language, public affairs, religion, culture, science, diplomacy, women and youth commissions. We are trying to be an answer to the problems in our society and to the problems that we see in the region.

There is a minimum of 15 people in the commissions, and a maximum of 21. Every commission has two co-presidents. First the delegate says which commission they want to work in, for example ecological, and if someone has a proficiency in for example, economy, the director says that you will be better in this commission. The exact decision will be in the general meeting with all delegates. After people are chosen they write something about what they will do in the future. Then every month they have to give a paper to the DTK about what they have done and what they will do next. The delegates have to stick to what they said they would do.

The DTK has their congress every two years, and every three months they have a general meeting with 501 delegates. In this general meeting, all of the commissions have to give their reports and say if there are new decisions about their commissions.

The DTK began in 2007. But before the last congress the DTK was made up of just 101 people and the meetings were once every six months. In the last congress, nine months ago, we decided to increase the number of delegates to 501 to make it more democratic.

The DTK is a legislative part of the Kurdish movement. Because of that, all of the political parties and municipalities have to listen to the DTK’s decisions. The parties and municipalities have delegates within the DTK and they are in this process also. Most of the time the DTK gives just a general perspective about problems in society, the general point of view, it doesn’t tell people what they should do in their local places.”

CW: Is the DTK repressed by the Turkish government?

“The Turkish government is trying to stop all of the Kurdish movements. They put pressure on us. but it’s not just about the DTK. They close our political parties too, arrest our co-presidents – it happens to all of our movements.

We must understand that if we are doing something for the Kurdish freedom movement, then all of the parts of our organisations have to fight against the system. In our organisations everyone makes their own decisions. We are trying to rebuild democratic autonomy. But we are in a Turkish system where we have to struggle to do this. Their laws, borders and army are forced on us. We are trying to overcome the borders of their system. It’s a way to change the system and struggle against this system.”

CW: Can you talk about the movement for democratic autonomy?

“Democratic Autonomy is something that can enable all of the people who are living in Kurdistan to make their own decisions. There is a really strict centralised system in Turkey which doesn’t work for us. In that system people living in Turkey can’t decide for themselves. For example, there are people from many different ethnicities and religions who can’t decide on their own regions’ problems. They have no way to be involved in decisions. Democratic autonomy could be a way to decide for ourselves.

The main issue for the Kurdish freedom movement is rebuild a democratic society. It’s not just about this region. We believe that if we succeed, all of the other parts of Turkey will see what we are doing and want the same thing. First we will rebuild this new life for ourselves and after that it will be for all of Turkey.

Democratic autonomy is a model for all of Turkey. It is the most equal system.”

CW: How can democratic autonomy work when you still have a a central government?

“If you develop democratic autonomy then at the same time the central government will lose its power. The locals will decide what they need. If they decide that they need police, they will make that decision. It won’t be like now. The central government won’t have this power, they will just continue to manage a little and coordinate between the different autonomous regions. All of the power will be at the local level.

Democratic autonomy is not a structure from top to bottom. The most important thing is that the people are organised. The local people in the streets and countryside make their own councils and decide about themselves in these councils. It is horizontal. With these communes people make their own decisions. They learn not to get their needs from the central government. They are working for their own needs. In 2004, these councils began to be set up. Not just in villages but in many districts and cities. People working for the party* in local areas came together and made a space for people to organise.”

CW: Where did the idea of democratic autonomy come from?

CW: Is the system of Democratic Confederalism in Rojava the same as what you are doing here?

“Of course one is similar to the other and they are from the same perspective. But there is one difference. We are trying to build this system but in Rojava they have already built it.”

CW: Is there representation for LGBT people within the DTK?

“The DTK includes the HDP [The pro-Kurdish People’s Democratic Party] and LGBT people have a quota in the HDP. In the DTK there isn’t representation for LGBT people now, but we don’t discriminate. They are welcome to join us.”

CW: How would you prevent countries such as the US from interfering with the societies that you are trying to create?

“The Kurdish struggle is not a new struggle. It started 40 years ago. It’s not just in this region, it’s not just Rojava and Bakur. It’s in all four parts of Kurdistan. Until now we have some tactical considerations, but we mustn’t forget that the main power is the self-power of Kurdish people. Our leader, Öcalan, said that there are two systems: one system is capitalist modernity and one is democratic modernity**.

From the 70s the leadership of the PKK struggled against the imperialist Turkish government and the other imperialist governments. Other countries support the Turkish government in political and diplomatic ways. They have tried to stop our struggle but we have created the revolution in Rojava. We need the revolutionaries, the democratic people living in Europe, to support us because all people who believe in democracy have to work together.

In Rojava, the US supported us, but only after a long time. Yes, they sent their planes but after maybe 45 days. It was the self-power of the YPG and YPJ [People’s Protection Units] that was successful.”

CW: What can we do outside of Kurdistan in solidarity?

“The PKK is in the list of terrorist organisations in Europe and the US. We want people to campaign to remove the PKK from this list. We think this is the first priority.

To read a recent statement by the DTK click here.

*People in Bakur often refer to ‘the party’ without stating clearly which party they are referring to. This may be because there is a constellation of closely aligned political parties, civil society groups and social movements working toward shared goals. The movement for democratic autonomy is supported by the People’s Democratic Party (HDP), who have 59 seats in the Turkish parliament and are in control of many municipalities in Bakur. Another local party, the Democratic Regions Party (DBP) and the PKK.