Home
/
Migration
/
Deportation targets and the deterrent dogma: UK immigration enforcement from Straw to May

Home Office anti-migrant policies have been built around deportation targets since they were introduced in 2000. Here’s a look at how they started, how they’ve shaped the immigration enforcement system – and why they have never worked to “deter” migrants.

The current “hostile environment” against migrants is the latest version of a strategy conceived 20 years ago by Tony Blair and Jack Straw. They set up the raid squads, expanded the detention system – and introduced the first known deportation targets.

In 2000, Labour set a target to deport 30,000 people over the next year. This was a crucially important number. It guided the size of the new PFI-funded and privately managed detention centres, and shaped the Immigration Enforcement system inherited by Theresa May today.

To understand this system, we need to go back to the media-fuelled asylum scare that started around 1998. Here we see not just the beginning of deportation targets, but also of the deterrent dogma central to the “hostile environment” approach: make life miserable for a few people and others will leave, or not come in the first place.

However, there is one crucial difference between the Blairite vision and today’s version. Labour’s targets aimed at one small group: asylum seekers. They were the media bogeymen of the day, attacked in regular Daily Mail or Sun front pages. But they numbered just over 80,000 in 2000, dropping to less than 30,000 every year since 2005. That is a tiny proportion of all migrants. Leaving aside the ethics of scapegoating vulnerable refugees fleeing war and repression, it at least seemed a relatively manageable target.

Today’s Home Office, in contrast, has set itself the task of “controlling migration” overall – but still using tools designed to terrify just a few thousand asylum seekers. There are over 50 million entries by “foreigners” into the UK each year. Some only stay for short visits, others for months or years. No one can say how many people become “irregular migrants”, for instance by staying beyond the terms of their visas, but the best estimates are in the hundreds of thousands.1

The Home Office does not have the means to control migration.2 In fact, no modern democratic, capitalist state could. Truly sealing the borders would mean the kind of violence European states currently reserve for foreign wars. And it would mean crashing the economy by shutting down global trade and labour flows. We may get to a political climate where these things are possible, but we are not there yet.

In private, Home Office bosses know this. In interviews with the Independent Chief Inspector of Borders and Immigration (ICIBI), senior managers described Immigration Enforcement as “not a realistic working model”, or “a business model that hasn’t moved on”.

In public, no one dare say the truth: immigration enforcement doesn’t work. Or rather, as we have argued in a previous report: it’s not so much about actually controlling migration as creating a spectacle for anxious anti-migrant voters. So they keep playing the game, spreading misery and fear, as Home Secretaries pose at being even tougher than the last. 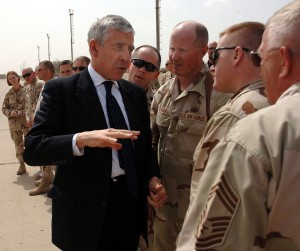 How we got here: Jack Straw’s deportation targets

Yarl’s Wood, the Bedfordshire detention centre now notorious for sexual abuse by guards, opened in 2001. It was one of the new wave of immigration prisons which expanded the detention system, built and initially managed under a PFI contract by Group 4 (now part of G4S). In 2002, detainees rebelled, and the centre burnt down. In October 2004, an inquiry conducted by the prisons and probation ombudsman Stephen Shaw published its results. This document offers a unique published insight into how the present Immigration Enforcement system came about.3

The Labour government’s new immigration policy was heralded in a 1998 White Paper called “Fairer, Faster, Firmer: A Modern Approach to Immigration and Asylum”. Its ideas would play out over an unprecedented wave of new Immigration Acts – five in under ten years.

In many respects Labour pursued “liberal” immigration policies, most famously enacting free movement for European Union workers. But simultaneously, it sought to appease anti-migrant sections of “public opinion” with a vicious clampdown on one scapegoat group: asylum seekers. The 1998 White Paper called previous measures around asylum “a shambles” and flagged two themes that would run through Labour immigration policy: the need to distinguish between “genuine” asylum seekers and “bogus” ones who are actually “economic migrants”; and minimising “the attractions of the UK”, to put off arrivals.

The white paper also contained the government’s first formal pledge to “consider the need for an increase in the detention estate in order to support an increased number of removals”.

“This is a massive increase in anything any Government has previously delivered – compared for example with 8,000 in the current year.”

How were these targets set? One 22 December 1999 letter from Home Office manager Peter Wales gives a rough working out:

“Based on a current projection of 80,000 asylum applications of whom 66 per cent are unsuccessful, this will be in the order of 50,000 to be removed. Currently, some 30 per cent depart voluntarily. If this remains constant there will still be some 30-35,000 who will require some period in detention prior to removal.”

So the deportation targets were set in terms of projected asylum applications, and then in turn led plans to expand the detention estate. The same letter explains that if these 30-35,000 people spend an average of a month in detention, 2,750 places would be needed. Another source mentions a Home Office “rule of thumb of 8.75 removals per detention space per year” – which would mean 3,420 spaces for 30,000 deportations. But by 9 March 2000 Jack Straw was thinking even bigger, asking civil servants to advise on “how we would urgently expand detention accommodation to 4,000 places”.

Why the jump to 4,000 places? The Shaw report concludes that it “was as much to do with deterring potential asylum seekers as removing those that were not so deterred.” It quotes two letters that set out this thinking. The Home Office permanent secretary Sir David Omand wrote on 10 March 2000:

“Detention is a key element in effective enforcement and it contributes to the impression potential asylum seekers have of the UK … We also believe that up to a further 1500 places would significantly enhance the deterrent effect for new asylum seekers.”

A month later on 14 April, Jack Straw explained his policy to the Chief Secretary of the Treasury:

“… it will also send a strong message to potentially unfounded claimants that we are administering a firm immigration control. The more effective way of tackling the problem of removals is to reduce significantly the number of claimants seeking entry.”

Again, it is important to emphasise how much policy at this point was focused on asylum. Blair, Straw and their civil servants weren’t thinking here about targeting half a million “illegals”, let alone controlling immigration as a whole. Their enforcement was very specifically aimed at asylum seekers. For example, at the end of 2001 – the first year the Home Office published detention figures – 83% of people detained were asylum seekers.4 Whereas in every year from 2011 to 2017 asylum seekers were around half of detainees.

Seen in that context, the deterrent argument makes more sense than it does today. 80,315 people claimed asylum in 2000.5 It was ambitious, but within the bounds of reality, for the government to talk of deporting almost half that number. And it was at least conceivable that this kind of tough “clampdown” could have an impact in persuading others seeking asylum to go elsewhere. By focusing just on asylum seekers rather than all “illegals”, their targets were much more modest: on the scale of tens rather than hundreds of thousands.

After peaking at over 80,000 in 2001-2, refugee numbers began to fall again. Asylum claims dropped below 30,000 in 2005, and bottomed at just under 18,000 in 2010. It is debatable how much, if anything, this had to do with Labour’s tough policies. Refugee movements are overwhelmingly caused by conflicts that drive people from their home countries, and numbers basically halved across Europe in this period. Then came the Arab revolutions and numbers started to rise again – although never to their 2000 level.

In the meantime, the UK’s immigration “debate” also moved on. The obsession with asylum faded – but the fixation on immigration did not. Instead, the xenophobia stirred up against refugees was redirected to new scapegoats: East European low wage workers, and the shadowy figure of the “illegal immigrant”.

Immigration policy moved in line. The last of Labour’s big Immigration Laws, the Borders, Citizenship and Immigration Act 2009, was the first that didn’t mention asylum in the title. In 2010 the Conservative Party made the bold step, much criticised by friends in business, of introducing the “net migration” target. This cemented a shift away from asylum scapegoats to the much bigger question of overall numbers. Next, then Home Secretary Theresa May’s “hostile environment” approach vowed to tackle the broader question of “illegality”. Ed Miliband’s Labour got on board too – acknowledging that “the last Labour government got some things wrong on immigration”, with “stronger border controls” needed “to tackle illegal immigration” (and while Labour may have shifted to the left under Corbyn, their 2017 election manifesto still promised 500 more border guards).

The “hostile environment” approach was framed explicitly in terms of deterring “illegals”. As Theresa May explained in 2013: “what we don’t want is a situation where people think that they can come here and overstay because they’re able to access everything they need.”

Is it working? The short answer is: no.

The Home Office has never provided any evidence to back up its deterrent rationale. Official statistics do show a recent reduction in immigrant arrivals, particularly from Europe: but this is widely interpreted as an effect of Brexit, rather than any Home Office measures.

In short: there is no sign at all that the “hostile environment” policies are having any deterrent impact. In fact, recent voluntary return figures are actually down.

And now the migrants to be deterred are not just tens of thousands of asylum seekers, but hundreds of thousands of “illegals”. As that manager interviewed by the Independent Chief Inspector put it, “it’s a business model that hasn’t moved on”.

1A study carried out by the London School of Economics (LSE) in 2009 gave an estimate of 618,000, in a range of 417,000 to 863,000. Ian Gordon, Kathleen Scanlon, Tony Travers and Christine Whitehead, “Economic impact on the London and UK economy of an earned regularisation of irregular migrants to the UK”, GLA Economics / LSE, p6 http://www.lse.ac.uk/geographyAndEnvironment/research/london/pdf/irregular%20migrants%20full%20report.pdf

3Stephen Shaw, Prisons and Probation Ombudsman: “Report of the inquiry into the disturbance and fire at Yarl’s Wood Removal Centre”, October 2004. The passages quoted below all come from Part III “Why and how Yarl’s Wood was built”, particularly pages 120-135

6The figure for 2017 published in May 2018 was 21,283 – but this is yet reliable, because verifying returns can often involve a delay of several months.