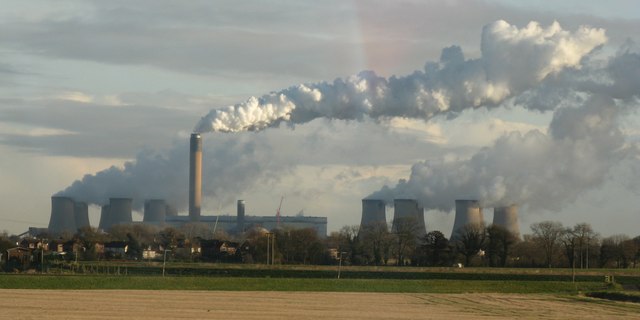 Ahead of Drax’s AGM, Biofuel Watch, give us the low down

On 13 April, Drax Plc, operator of Drax Power Station, will be holding its AGM in York, sparking protests both locally and in London where its major investors have their offices. Campaigners will be highlighting Drax’s involvement in dirty energy, its links with climate change and deforestation, and its continued reliance on government subsidies – which could instead be going to support genuinely renewable energy – to keep afloat.

While Drax describes itself as ‘Europe’s largest decarbonisation project’, its portfolio now covers three forms of dirty energy: coal, biomass, and, since 2016, gas1. Drax opened in 1974 as a coal-fired power station, and in 2012 it began the process of converting 3 of its 6 generators to run on biomass in the form of imported wood pellets. This conversion is now complete, with 65% of the energy Drax generated in 2016 coming from biomass2.

Despite its claims to be ‘preparing for a post coal future’, Drax remains one of the UK’s largest burners of coal, importing it from places such as Colombia, where the coal industry is responsible for air and water pollution and landgrabs resulting in the dispossession of Indigenous People’s communities from their land, and the impoverishment, ill health and growing malnutrition among those not evicted outright3. Drax remains the UK’s single largest emitter of CO2, and is now also the world’s largest biomass power station, burning the equivalent of more than the UK’s total annual wood production each year4.

Biomass is considered by industry and government calculations to be lower carbon than coal because it is assumed that the carbon emitted will be reabsorbed by new trees planted to replace those that were burnt. However, burning trees today releases carbon into the atmosphere today, and any new trees planted won’t reach maturity and absorb the same amount of carbon for decades. At a time when we need to be rapidly reducing our carbon emissions, it makes no sense to create such a ‘carbon debt’. The atmosphere doesn’t care whether CO2 in it comes from burning biomass or coal. If trees are left standing, they will continue to absorb carbon, contribute to ecosystems and provide habitat and food for other species. If they are cut down, this is lost and can’t be replaced quickly, if ever. A forest ecosystem takes decades to mature, and to reduce the trees’ importance to their carbon sequestration capacity is a massive oversight and an incomplete way of looking at a forest.

Just over half of the wood burnt at Drax comes from the United States, and most of this is supplied by the pellet company Enviva. Enviva sources wood from clearcut wetland forests, important ecosystems which are home to a wide variety of animal and plant species and have been classified as global biodiversity hotspots by the International Union for the Conservation of Nature, and ‘some of the most biologically important habitats in North America’5. Many of the species who live in these forests are now threatened by habitat fragmentation from logging and land conversion. According to the Natural Resources Defense Council, it is difficult to restore these forests after logging because they take a long time to mature and being logged once can alter flooding patterns, reducing the diversity of plant and tree species when the forest does eventually regenerate.6 Supplying biomass to UK and European power stations is a major driver of forest destruction. A local resident says:

“When I see wood pellet ships leave our port, I don’t see the vessel. I see the miles of clearcuts I know happened. It’s a feeling of loss.”7

Drax also sources some of its pellets from plantations, which have taken the place of forests in some areas of the southern United States. The biomass industry points to these plantations as evidence that its activities are not reducing forest cover, but a monoculture plantation does not support as many other species as a forest does, is more likely to deplete the soil and water and may rely on spraying with agrochemicals.

As the only currently operating coal-fired power station in the UK to have converted to biomass, Drax is playing an important role in pushing bioenergy as a replacement for coal and making it appear to be a ‘sustainable’ option. Two other biomass power stations currently being built, Lynemouth (another converted coal power station) and MGT Tees (a purpose-built biomass power station), plan to source their pellets from Enviva. Drax’s research and development of necessary infrastructure, including specially adapted railway carriages and storage domes for biomass pellets, will be important if large scale import-reliant biomass is expanded further in the UK. Drax also owns a pellet retail business and is in the process of expanding its pellet mills in the US.

Through engagement with the community using the local media8 and ‘corporate social responsibility’ activities9, Drax is making further attempts at equating biomass with sustainability in people’s minds. For exampel, to help with lobbying the government and EU, Drax has hired the PR company Edelman, whose other clients have included E.On, Shell, Walmart and Burger King (see Corporate Watch profile of Edelman here).

Drax’s CEO, Dorothy Thompson, chairs the Sustainable Biomass Partnership (SBP), a biomass certification scheme set up and administered entirely by energy companies. Unsurprisingly, the SBP has concluded that Drax’s biomass is sustainable – based largely on reports written by Drax itself. Environmental NGOs have described this certification scheme as ‘little more than industry greenwash’.10 The recent appointment of a senior Drax official – Dr Rebecca Heaton – to the UK’s Committee on Climate Change, a body set up to advise the UK government on reducing its carbon emissions, provides Drax with another opportunity to influence government and popular opinion about the feasibility and sustainability of biomass11.

Drax has been a recipient of renewable energy subsidies since it started converting to run on biomass. In December 2016, Drax started receiving another more lucrative subsidy, called a Contract for Difference (CfD), bringing Drax’s total subsidies for the year up to £541 million, or nearly £1.5 million a day, a figure which will go up further in 2017 thanks to the CfD. These subsidies are paid out of a surcharge on your electricity bill. At a time when 6.59 million households in the UK are considered to be ‘fuel poor’ (having to spend more than 10% of household income on heating)12, these subsidies are very badly misplaced. Imagine what we could achieve if rather than subsidising forest destruction, we invested this amount of money into energy saving, retrofitting buildings to make them more energy efficient, or generating genuinely renewable energy.

Reliance on dirty energy is not acceptable, whichever way you spin it. Biomass is a dangerous false solution to climate change and subsidising it is a waste of bill payers’ money. We will be visiting Drax and its investors on the day of its AGM to say that instead of paying for forest destruction and increased carbon emissions with our electricity bills, we want to reduce our energy demand, protect forests and build more democratic energy systems. Communities around the world are trying to address the consequences of climate change, and companies like Drax are getting in the way.

4In 2016 Drax burnt pellets made from approximately 13 million tonnes of wood https://drax.cdnist.com/wp-content/uploads/2017/03/Drax-Group-plc-annual-report-and-accounts-2016-Smart-Energy-Solutions.pdf, and the UK’s annual production is around 11 million tonnes.