Mangroves are among the most powerful natural defences against global warming. But their decline, due to the spread of polluting agents and clearances to make way for big business, is putting countries like Mexico at risk of catastrophic natural disasters. Almudena Serpis writes for Corporate Watch from Cancun, about the importance of mangroves and the growing resistance against their destruction.

Amongst the luxury of Cancun´s hotels and hectic shopping malls, just a few metres away from the Caribbean sea, we walk through empty concrete pathways which cross the city’s impressive mangrove swamp. But despite it being one of Cancun’s last wild nature enclaves, it is the focus of a million dollar investment plan to transform it into a tourist building complex.

The water is covered with broken branches and damaged trees, signs of what might come if the go ahead is given to seal it with concrete. They are part of the destructive trail left behind by the excavators that stormed the area last July but were forced to stop after a group of concerned animal lovers and environmentalists stood before them so they could not go further.

But despite the area looking ghostly, when we enter it is full of wildlife. According to the grassroots organisation ‘Guardians of the Mangrove’, which has set up a protest camp inside, this mangrove swamp is home to more than twenty different species of animals, including crocodiles.  The area is delimited by fences covered in thick black plastic, which has been ripped to shreds by protesters so that everyone can see what goes on inside.

“We got rid of the plastic after we saw the excavators throwing sand on crocodiles and birds, trying to kill them. It was a horrible scene. Now they can’t hide.” says Katerine Ender Cordova, who leads the campaign to defend the mangrove, and accompanies me through it. She and various other women put their bodies in front of the excavators and say that they would do it again. “We won’t stop”, she says.  Her eyes show passion mixed with fear. The Mexican authorities are not ones to mess with.

The area is distributed between foreign and national private companies, alongside council-owned land. She explains that if nothing is done the protected ground where we stand will become part of a 69 hectare hotel and residence area, which will include a church. 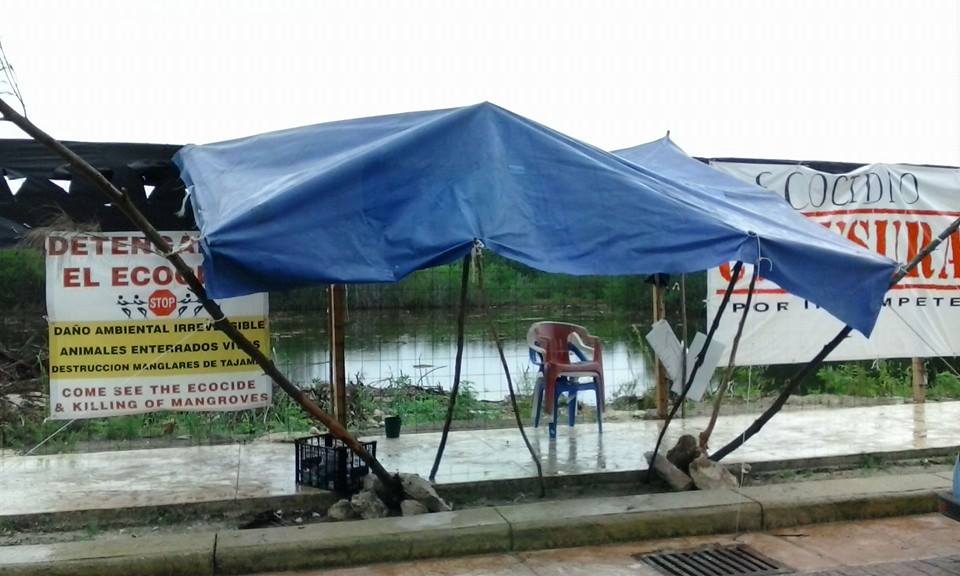 The role of mangroves

During the Fifth National Congress of Climate Change Investigation, celebrated in Cancún last month, environmentalists warned about the worldwide effects of the rapid destruction of wetlands, which serve as natural barriers preventing the devastating effects of tropical storms.

“Mangroves have being severely impacted all around the world. Recent estimations indicate that we have lost 12% of the total, which is equivalent to 62,000km squared,” says Jorge Herrera Silveira, biologist and investigator from the Mexican centre of Investigation and Advanced Studies (Cinvestav).

Dr Herrera also tells me that mangrove swamp ecosystems that capture more CO2 and store more per area unit compared to terrestrial ones. When you destroy one, CO2 is released alongside methane, multiplying the effects of global warming. Examples of their fast disappearance can be seen in various parts of Mexico, , one of the world’s five biggest countries for mangroves.

Katerine walks us to the edge of the water. She puts her fingers in her mouth and makes a squeaking noise. We all wait patiently for a few minutes. Then a four metre crocodile emerges from the water amongst the bushes and swims towards us. Nobody seems to be afraid. Suddenly it changes position, getting her head and front legs out of the water and we get the message that it is best to leave.

Aside from the living beings found here, mangroves play a vital role in their surrounding ecosystem. They serve as barriers against hurricanes and floods, protect against erosion, preserve coastlines and improve water quality, according to a report by Mexican government environment agency CONABIO.

Tropical countries like Mexico have a long rainy season, making them more vulnerable. This October, Cancún suffered severe floods. “As a direct consequence of the rise in sea level, flooding due to storms is more frequent, as we can see these days, and now extensive urban areas are flooded because they were constructed over wetlands like mangroves”, says Dr Herrera.

In 1999 the Odisha cyclone hit the North Indian Ocean, killing around 10,000 people on the Indian coast. But Alfredo Quarto, head of NGO Mangrove Action Project, says there was “no death toll in populations living in areas where mangroves were intact.. A 2009 study conducted by the University of Delhi and Duke University predicted that if the mangrove width had been removed entirely, there would have been 1.72 more deaths per village within 10 kilometres of the coast in that area.

Another example of the effects of mangrove decline is the vast destruction caused by hurricane Katrina in New Orleans, which was aggravated by the loss of 50 miles of wetland in the 1960s, wiped out to create a canal for large ships to navigate through the Mississippi River. The canal, named Mr Go, was opposed by locals who claimed that the swamplands protected their villages from hurricanes.

“I was on watch around 3 days a week for the whole night. I could hear the crocodiles, but the worst thing were the mosquitoes”, says Manuel, one of the many activists who has been keeping a watch in 24 hour shifts at the endangered mangrove in Cancun.

The reality is that mosquitoes tend to breed in fresh water, so when mangrove swamps, which are salt-based, are removed, fresh water stagnates and mosquitoes multiply. This affects urban areas and more mosquito-related diseases emerge, such as dengue and malaria.

“It is a false assumption that swamps are places of malaria carrying mosquitoes”, says Alfredo Quarto. “It is actually quite the contrary”.

Mangroves are protected by different types of environmental laws regarding their precious vegetation, marine wildlife, bird population and functionality. In Mexico in 2007, article 60 of the General Law of Wildlife (LGVS) came into effect, prohibiting any building work or activities that could harm the hydrology of mangrove swamps. Despite this, they keep being destroyed in the name of progress.

“There is a double discourse at the level of federal and government authorities”, Dr Herrera tells me. “On one side, they enact laws, regulations and norms to protect mangrove swamps, and on the other, with the excuse of development and the creation of new jobs, they give permits to change the use of soil and destroy them.”

A lot of mangrove wetlands are being turned into shrimp farms. People from Europe, the US, Canada and Japan eat shrimps that come from farms located in countries like Thailand, where wetlands are destroyed and the land they occupied is converted into shrimp farms.  “For this reason we are also trying to question people’s diets, because they have a direct impact on the degradation of wetlands”, says Quarto.

A recent article by Mark Huxham, chair of the Association for Coastal Ecosystem Services, shows that in prawn aquaculture is causing mayhem in Sri Lanka too. He writes that it is estimated that “192,000 additional tonnes of carbon have been added to climate change as a result of these land use changes in Puttalam, Sri Lanka alone.”

Despite their indispensable value, mangroves keep disappearing every year due to the disastrous management of wetland soil, ignoring the vital purpose they serve. “Mangroves are still considered wastelands where disease-carrying mosquitoes live in high populations,” says Mr Quarto.

But now the reality is strikingly obvious and the preservation of mangrove wetlands is managing to get a place in land owners agendas as awareness grows due to the efforts of local people and NGOs.

Preservation efforts are carried out by re-planting mangle trees and engaging the local community in the process. A David vs Goliath mission against big capital.

Existing wetlands have to survive alongside a world of profit-driven business and expanding tourism, so in some places mangroves are preserved as tourist attractions combining business with sustainability. They have become a popular place for birdwatchers and nature lovers.  According to a report by Greenpeace Mexico, you can find more than 350 species of birds in mangrove swamps along the Mexican Gulf coast.

Mangrove walkways and scenic tracks are another way for people to become familiar with these widely unknown precious ecosystems. “It is important to raise consciousness. You can’t protect what you don’t know,” says the biologist Mr Herrera.

But it is also clearly a matter of a conflict of interests; wetlands vs hotel-lands.

Almudena Serpis is an activist and journalist who has worked in numerous magazines, newspapers and websites in Madrid, London and Amsterdam, and on assignments with the Ecologist Film Unit. Her research and investigations evolve around social movements, feminism and ecology. She is also a trained nutritionist.

Video on the role of mangroves by the  Mangrove Action Project: https://www.youtube.com/watch?v=3gukDbKrwQ8

Change.org petition to save mangrove swamps in Cancun: https://www.change.org/p/autoridades-de-canc%C3%BAn-detengan-la-destrucci%C3%B3n-de-los-manglares?recruiter=295832129&rp_sharecordion_checklist=control