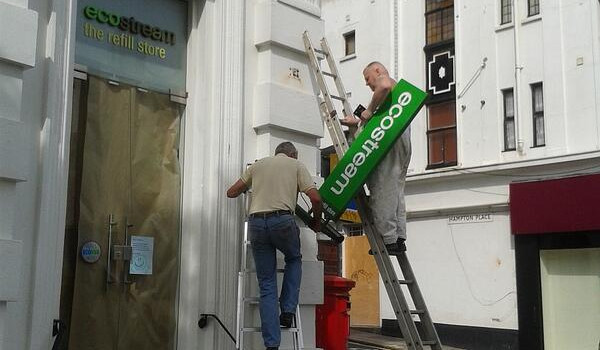 Brighton’s Ecostream store has closed down after a two year campaign of demonstrations, street actions and direct action.

Ecostream issued the following statement this morning: “SodaStream confirms that the EcoStream store, located on Western Road in Brighton, closed earlier this week. Following the two year test period, the company has decided to focus its business efforts on other channels, specifically on retail distribution partnerships.”

Sodastream, a manufacturer of machines and refills for making fizzy drinks at home, has a factory in the Mishor Adumim settlement industrial zone. Mishor Adumim is an industrial area attached to the residential settlement of Ma’ale Adumim, East of Jerusalem in the Israeli occupied West Bank.

In 2013, Corporate Watch conducted interviews with Palestinian Bedouin who had been displaced from their land to make way for Mishor Adumim. One of them told us:

“We are not allowed to go near them [the factories]. They took our livelihood to build them and we got evacuated for them to build their factories. After they built them there were no resources to live from for us. The gains are nothing compared to what was lost. They destroyed our lives and then gave a few people a job. It is nothing”.

Since the store opened there have been demonstrations outside its doors on a weekly or bi-weekly basis. Activists from Brighton and Hove Palestine Solidarity Campaign, Brighton Jordan Valley Solidarity, Jews for Boycotting Israeli Goods, local trade unionists, university students from Palestine solidarity groups and more joined together with the aim of closing the shop down. As well as the weekly pickets, campaigners took the oppurtunity to use the space outside the store to highlight the daily aggression against Palestinians. They talked to the public about Israeli house demolitions, the illegal apartheid wall erected on Palestinian land and Israel’s use of drones to attack people in Gaza.

Mass marches have been held in Brighton against the store. During an Israeli attack on Gaza in 2012 one activist locked himself to the doors of the shop forcing them to close. Last week activists unfurled a huge ‘Free Palestine’ on the wall opposite the shop.

It soon became clear that the pressure was taking its toll and the store remained largely empty even on the busiest of shopping days.

The demonstrations against the store led the Israeli embassy to contact Sussex Police asking them to take measures against the demonstrators. A group called Sussex Friends of Israel formed and has been holding a counter-picket every Saturday. The Zionist and Christian Zionist demonstrators regularly shouted racial abuse at Muslim, Palestinian and Jewish activists opposing the shop. They regularly chanted that there was “no such thing as a Palestinian” and called Jewish activists “self-hating Jews”. In short, SFI used bullying tactics to intimidate people who attended the demonstrations. Their antics caused chaos outside the store every weekend and made it even less likely that people would do their shopping there.

The closure of the Ecostream store is a victory for people power against a corporation profiting from human suffering and shows that the movement for boycott, divestment and sanctions against Israeli apartheid, militarism and occupation is continuing to gather momentum.

“This campaign has taken the message about human rights abuses in occupied Palestine to the people of Brighton, and their response has been fantastic. They have made it clear that they do not want businesses from illegal Israeli settlements trading in their town. The closure of SodaStream’s so-called flagship UK store in Brighton is just one step in a campaign to send a clear message to the Israeli government and the international community that, at the grassroots level, people of conscience are taking action to force Israel to comply with international law and to bring about justice for the Palestinian people. We give notice to the other stockists of SodaStream products in the city that we will continue to take the message about SodaStream to the people of Brighton on behalf of the Palestinian people. Congratulations to the people of Brighton and Hove, who can tell the difference between ethical and unethical.”