Glasgow Housing Association (GHA) is the biggest landlord in Scotland, housing an estimated 85,000 people.1 Tenants are angry at its plans to raise rents – even though services have been drastically cut through the pandemic. This comes as COVID-19 has hit many people hard, and on top of six years of repeated rent rises, an overall increase of nearly 20%.2

In recent weeks the Scottish tenants’ union Living Rent have been organising marches and protests against the rent hike, spreading tenants’ overwhelming demand for a rent freeze. In support of their campaign, we took a look at the finances of GHA’s parent company, Wheatley Group, to ask – do they really need to put up rents? The simple answer is: no.

The group’s accounts show that:

But before we get to those figures – just who is Wheatley Group? Glasgow Housing Association (GHA) is the “social landlord” set up when Glasgow’s council housing was privatised in 2003. But it is now part of a bigger company called Wheatley Group, which has numerous smaller associations and subsidiary companies across Scotland. Wheatley Group owns or manages 94,000 homes altogether. GHA is the biggest subsidiary with around 40,300 homes of these. The next biggest part is Dumfries and Galloway Housing Partnership (DGHP) with 29,000 homes, which joined Wheatley in 2020.

GHA is by no means alone in this trend. Once upon a time, Housing Associations were non-profit organisations set up to provide affordable housing for local communities. But in the last 20 years they have transformed, becoming big businesses. Successful associations have grown by buying up others, merging to become massive groups which own properties often across the whole of the UK. They have also increasingly become property developers and private landlords, renting and selling homes at market-level prices. This growth is funded by borrowing large amounts from banks and investment funds.

Why do GHA say they need to put up rents?

Right at the onset of the COVID-19 pandemic, in March 2020, GHA imposed a rent increase of 3.4%.3 One year later, it is asking tenants to face a further 1.7% rise. How does GHA justify hitting people with this extra burden?

This isn’t so clear. GHA sent round consultation documents GHA saying that if rents go up they “could keep delivering services and all the investment work already planned”. But they don’t say rents need to go up to do this. They just don’t give tenants any option to keep rents the same. They don’t provide any figures to show how much money they make from rents, what it is spent on, or why it is not enough for next year. There is a vague “breakdown of how each pound was spent” – but without actually giving any amounts!

If we want to understand what’s going on, the information GHA gives to its tenants is pretty useless. However, the information Wheatley Group gives to investors in its Annual Report is much more detailed, so we can take a look there. 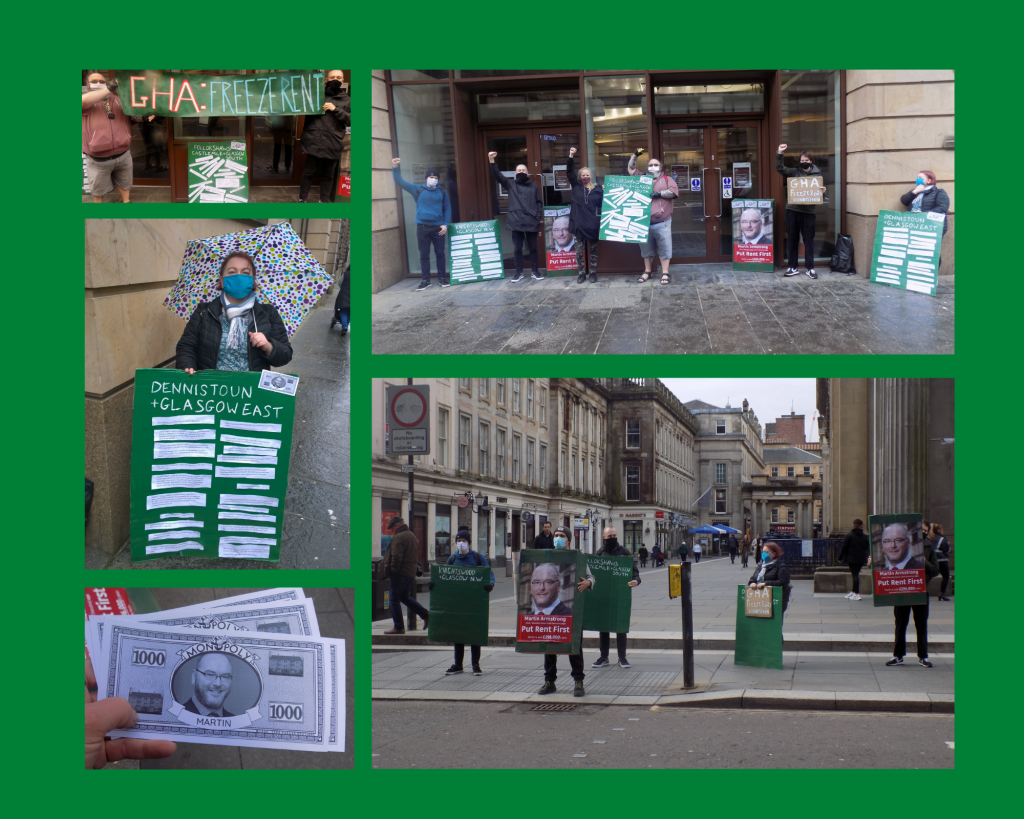 Wheatley Group’s latest Annual Report shows that it had a “turnover” of £357 million in 2020. This is all the money coming in from rent and other regular sources, before paying its costs.

As a “non-profit” company, Wheatley Group’s accounts don’t talk about profit. Instead, they use the term “surplus” to talk about the money they bring in minus the costs going out. Wheatley Group made a surplus of £14 million in 2020. So one thing is clear: Wheatley Group doesn’t need to raise rents because it’s losing money. It made a very healthy “profit” (surplus) in 2020.4

Sometimes companies can be profitable but still short of cash to pay their immediate expenses – e.g., because they are owed money which hasn’t come in yet. This is not so for Wheatley Group. They had no less than £116 million in cash sitting in the bank according to the latest accounts – more than enough to pay for repairs several times over.

Note: Wheatley also made a massive gain of over £200 million from the extrahousing stock, cash and other assets DGHP brought with it when it joined. This gave Wheatley Group a truly enormous surplus on paper of £245 million in 2020. We are not focusing on this figure as it isn’t available to spend. It’s “locked” into the value of the properties they took on, and it does not reflect the group’s performance – so isn’t a reason for higher or lower rent.

So where does the money go?

GHA’s consultation documents say rent increases will be spent on “delivering services” and “investment work”. But the reality is that about half of tenants’ rents aren’t spent on their homes at all. The rest goes on everything from subsidising new house building to paying managers’ salaries and bankers’ profits.

Wheatley Group’s Annual Report clarifies that the company spent a total of £129 million on repairs and investment in properties in 2020. £61 million of this was for repairs, with £66 million on “improvements” – e.g., new bathrooms and kitchens, or other spending to “improve” flats and communal areas.5

But as we just saw, the group had a turnover of £357 million. The bulk of that money came from social housing rents: £242 million, plus an extra £6 million in service charges.6

So: GHA and other Wheatley Group social tenants paid their landlord almost double what was spent on work on their homes. Or about four times what was spent on repairs. On any interpretation, it’s stretching the truth to say that rent rises are needed for “repairs and investment work”. And this is without the proposed rent rises.

Many GHA tenants have been struggling to meet rent payments during the COVID-19 pandemic – and now they’re being asked to pay even more. Meanwhile, some other people have been doing very nicely out of the housing business.

The accounts show more money goes on paying interest to investors – £72 million7 – or on “management and maintenance administration” costs – £62 million8 – than on repairs.

Let’s take the management and admin costs first. These are barely broken down in the accounts and we do not know how many of these are ‘genuinely’ necessary for the management and upkeep of properties. But we can find details of one item included: the bosses’ pay.

Last year the six people deemed “key management” together made £1.4 million. Of these, CEO Martin Armstrong was the highest individual earner. He made £351,000 – a base salary of £296,000 plus another £55,000 in pension contributions. The other five managers got paid over £160,000 each. That’s a lot more than most GHA tenants are taking home.9

Meanwhile, the “non-executive” Chairman of the Board, Alastair MacNish, pocketed £32,370. MacNish is the retired boss of South Lanarkshire Council. He isn’t involved in the day-to-day running of Wheatley Group and this money will be just for chairing meetings and other ‘supervisory’ duties. The hourly rate must be huge.

Rent goes to some even bigger earners. As we saw, Wheatley paid £72 million in interest last year. This goes to the banks and investment funds who lend the group money to pay for its building of new homes (Wheatley also receives grants from the Scottish government for this: the company spent £86 million10on building new properties in 2020, while receiving £41 million in government grants).

In total, Wheatley owes over £1.5 billion in interest accruing debt. Main lenders include the world’s biggest fund manager, BlackRock, as well as the UK’s giant banks HSBC and RBS. Ultimately, the hugely wealthy bosses of these institutions benefit from the interest. Tenants could ask exactly what this money is being used for, and whether it is worth the interest costs.11

In its Annual Report, Wheatley Group tells its investors a lot more than it does tenants. One basic fact we do know: the landlord is making a healthy profit, it doesn’t need to raise rents because it’s in the red. Another: rents already pay for much more than the cost of repairs and building improvements – they are used to subsidise other expenditures such as executive salaries, finance costs, and expanding the business.

But there’s still a lot of detail we can’t find from the published information. These are just a few questions tenants might want to ask:

If managers disagree with any of the points we’ve made above, we’d say: the onus is on them to provide clear information about where the money goes. Why aren’t tenants being told just what they plan to spend these rent rises on? 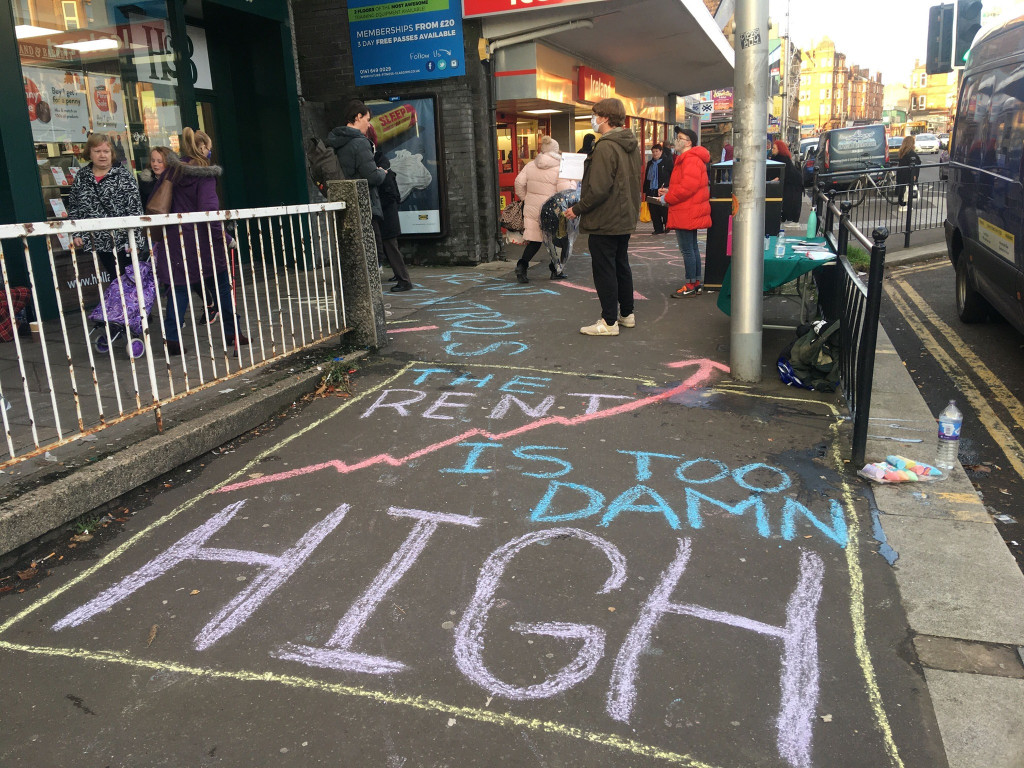 1 GHA don’t say how many tenants they have – this figure is estimated by Living Rent, based on multiplying the number of properties by the average Scottish household size of 2.15 people.

4The figures above are all from the Wheatley Group 2020 Annual Report, page 61