Throughout October Corporate Watch will be taking a critical look at the top six UK energy suppliers, in solidarity with the millions of people who are struggling to keep warm now that energy bills have risen once again.

We ask: who is profiting from supplying our energy? how much are the bosses getting paid? and how have these companies have been cosying up to government?

We will be releasing our alternative company profiles of Big Six energy suppliers in reverse order over the coming weeks, starting with…

Scottish Power Ltd is the sixth biggest energy supplier in the UK, currently controlling around 8% of the market as well as profiting from generating energy too. On top of its retail energy arm, the company operates wind farms, as well as several electricity networks across Britain.

Despite being called Scottish Power, the company is owned by Spanish multinational energy company Iberdrola, one of the largest electricity utility companies in the world. In 2021, as the cost of living crisis began, company top brass collectively paid themselves almost £10m, and Scottish Power paid the Iberdrola corporate group over a billion pounds. Iberdrola’s CEO’s salary was at least £5.49m, and Iberdrola shareholders were paid hundreds of millions in dividends.

As well as owning Scottish Power, Iberdrola group companies can be found in Brazil, US, Mexico and Spain. The Iberdrola group is focused on expanding its offshore wind farm business globally. It employs 40,000 workers worldwide.

Scottish Power is a major donor to the Tory party, and enjoys a cosy relationship with the UK government. Company directors include an ex-Conservative minister, as well as an ex-member of the Spanish parliament and World Bank executive.

Scottish Power’s parent company is implicated in several scandals, and has subsidiaries in a tax haven.

How many UK energy customers does Scottish Power have?

Scottish Power is owned by Spanish energy giant Iberdrola, which is listed on the Madrid Stock Exchange. According to We Own It, its biggest shareholders include the Qatari sovereign wealth fund the Qatari Investment Authority and BlackRock, the world’s largest asset management company.

How much is it making?

The company also made £863.4m from renewable energy generation, with most of the energy used to supply Scottish Power’s own customers.

Scottish Power’s highest paid director – likely to be CEO Keith Anderson – received £425,000 (up from £383,000 the previous year) in pay, as well as £69,000 in pension benefits in 2021, in addition to share benefits. In total, Scottish Power’s directors received £1.05 million in pay, an increase from 2020. When share-based payments are included, the 15 key management personnel received a total of £9.8 million.

Chair Ignacio Galán, who is also CEO of parent company Iberdrola, earned at least £5.49 million in 2021, an increase from the previous year.

Picking on the most vulnerable

In September 2022 Scottish Power was warned by energy regulator Ofgem about the way it is treating customers who fall into energy debt. Ofgem ordered the company to:

The company is also paying 157,236 customers a total of £1.9m after overcharging them when they switched supplier or tariff. In April 2022, the Guardian reported that the company had acted with “staggering incompetence” after one customer had asked for their gas to be disconnected, but had continued to receive charges.

Scottish Power has also been criticised for forcibly installing pre-pay meters in customers’ homes. Energy companies can apply to have a pre-pay meter installed if people fall into arrears, but they are not supposed to do it if customers are ‘vulnerable’. Scottish Power customer James Collins told iNews that the company had forcibly installed a pre-pay meter at his home despite him telling them that he had diabetes, and that he needs a consistent power supply to keep his insulin refrigerated.

Ignacio Galán appeared before the Spanish High Court in 2022 over allegations of corporate espionage that go back 15 years. Four Iberdrola executives are currently being investigated for bribing a Spanish police officer to spy on rival companies. Unsurprisingly this scandal has attracted some negative press attention, and the company is trying to silence it. Iberdrola is currently seeking $20m in damages from Spanish news site El Confidencial over its reporting of the alleged spying. Reporters without Borders has urged Iberdrola to drop the case, calling it “an attempt at intimidation”.

In the US, a multi-million dollar lawsuit against Iberdrola’s subsidiary Avangrid claimed that the company had been racketeering by buying large quantities of unnecessary computer equipment at inflated prices, and passing on costs to its energy customers. Avangrid maintained that the allegations were baseless, and the lawsuit was withdrawn.

Is the company suffering as a result of energy caps?

Despite paying no dividend to parent company Iberdrola last year, Scottish Power is still making Iberdrola rich. It repaid a massive £3.5 billion in loans and paid £50.3m in interest to Iberdrola Group companies.

Does the company avoid paying tax?

Iberdrola has a number of US subsidiaries registered in Delaware, a state known as a tax haven and for its corporate secrecy laws.

Political donations in the UK

Scottish Power has donated at least £48,000 to the Conservative Party since 2010. In 2021 the company paid £7,000 each to both the Conservatives and Labour to sponsor receptions at each of their party conferences.

Does the company have close connections with government?

Anderson chairs CBI (Confederation of British Industry) Scotland, is a member of the Scottish Government’s Energy Advisory Board, and has previously been a vice-chair of the Scottish Environmental Protection Agency’s national task force.

Scottish Power Director Claire O’Neill started off as a policy advisor to George Osborne before becoming a Conservative MP. She went on to become Climate Change Minister and then Minister for Energy and Clean Growth under Theresa May.

Another director – Jim McDonald – is vice-chancellor of Strathclyde University, Glasgow. Two further directors also have links to the university. One, Lesley Anne Glover, has previously been Chief Scientific Adviser to the Scottish Government and the President of the European Commission.

Director Inigo Fernandez De Mesa served in the Spanish government, including as Secretary of the Treasury. He has sat on the board of the Bank of Spain and has been an Alternate director of the World Bank.

Scottish Power was a ‘Principal Partner’ of the COP26 climate conference in Glasgow, partnering with the UK government on opening and closing ceremonies, and hosting events with the International Energy Agency’s Executive Director and leaders of cities from across the UK. Company representatives also attended an “intimate” breakfast roundtable with former US vice-president Al Gore. 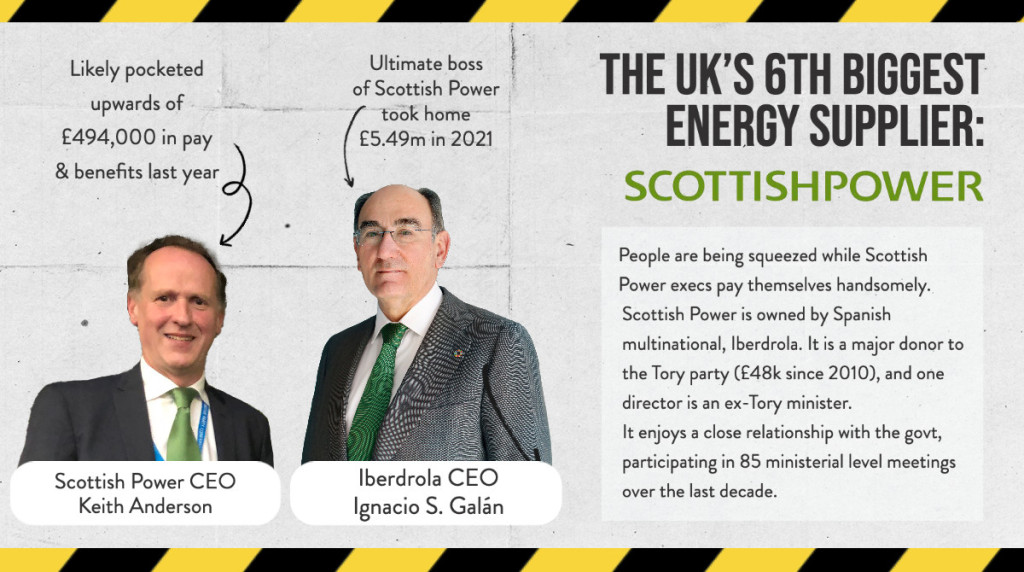