Throughout this winter Corporate Watch has been taking a critical look at the top six UK energy suppliers, in solidarity with the millions of people who are struggling to keep warm now that energy bills have risen once again.

We ask: who is profiting from supplying our energy? How much are the bosses getting paid? And how have these companies been cosying up to government?

We have released our alternative company profiles of the Big Six energy suppliers in reverse order over the last few weeks; E.ON, OVO, Octopus Energy, EDF and Scottish Power. Next up:

British gas is still capitalising on its image as a publicly owned energy provider of the past. However its motives these days are anything but for the public good. From mis-selling to customers to mistreating workers, rampant greenwashing and enforcing a poverty premium for customers by aggressively installing pre-pay meters; today British Gas only serves its shareholders and directors, as it makes obscene profits despite the cost of living crisis.

British Gas is the UK’s biggest energy supplier and is owned by Centrica Group plc. It supplies 28.2% of the UK’s gas and 20.2% of its electricity. The majority of British Gas’ supply is from renewables, nuclear, and natural gas.

Created in 1812 under the name The Gas Light and Coke Company to develop and maintain gas supply, it was the world’s first public utility firm. In 1986, almost two centuries later, the Thatcher government privatised British Gas under the Gas Act.

Centrica, the current parent company, was created in 1997. It does business outside the UK in Ireland, the United States and Norway. Part of the reason it has fared better than other energy firms in recent years is because of its diverse portfolio of subsidiaries, which buy and sell energy amongst suppliers, produce energy, or sell it directly to customers.

HOW MANY UK ENERGY CUSTOMERS DOES BRITISH GAS HAVE?

HOW MUCH IS IT MAKING? 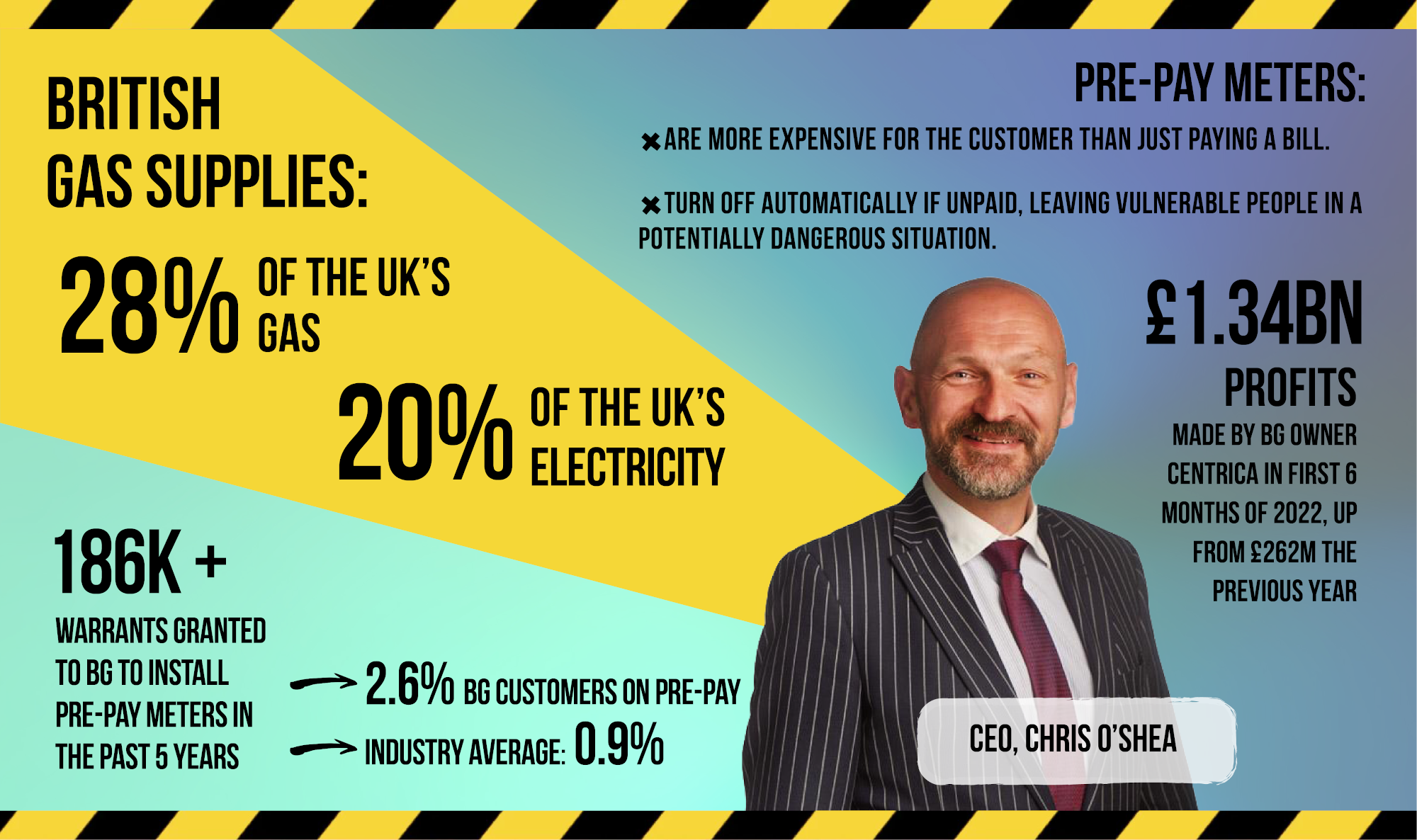 Centrica is raking it in at the moment, after performing so poorly in 2020 that it had to stop paying dividends to its shareholders. Company profits for the six months ending in June 2022 rose to £1.34 billion from £262 million a year before. This means that Centrica’s half-year profits were five times higher than a year earlier. This is in the aftermath of a wave of energy companies going bust in 2021.

In November 2022, 38.3% of Centrica was owned by institutional shareholders, with Schroder Investment Management Ltd holding the largest share at 9.49%. One of Schroder’s portfolio managers was accused of fraud in the United States in 2010. It was also fined in Hong Kong in 2016 for failing to properly disclose the stocks held by the company.

The usual suspects, such as multinational investment companies like the Vanguard Group and BlackRock as well as governments such as Norway and New Zealand also have shares in Centrica. BAE Systems – an arms company which supplies supplies dictatorships – also holds shares in Centrica, according to business information databases.

Chris O’Shea is Centrica’s chief executive. He worked for Shell in Nigeria in the mid-2000s; the oil giant has a horrific legacy of repression in the country and has so far avoided calls for justice. For his role as Chief Executive at Centrica he received £875,000 in 2021.

Chief financial officer at Centrica is Kate Ringrose, who was paid just under £1 million in 2021. Despite the increasing poverty caused by rising energy prices, she also accepted a hefty bonus, although Chris O’Shea refused his. In fact, her bonus, pension and other benefits more than doubled what she would have been paid if she had accepted her salary alone.

Ex-Home Secretary and former Secretary of State for Energy and Climate Change, Amber Rudd, was appointed to the board of directors in 2022 when she was no longer an MP. Nevertheless, her appointment is another example of the revolving door between the Conservative party and the boards of the UK’s top energy companies.

IS BRITISH GAS ENERGY SUFFERING AS A RESULT OF THE COST OF LIVING CRISIS?

Not at all. In fact, in June 2022, Centrica received so much criticism over how much money it was making that the company promised to donate 10% of its profits to vulnerable customers, and CEO Chris O’Shea agreed to forego his massive 2021 bonus. Yet it didn’t stop O’Shea from criticising a government windfall tax, which would likely be much higher than the 10% the company has voluntarily offered.

Centrica’s charity arm, which is set to distribute this 10%, is the British Gas Energy Trust. Centrica claims the charity’s aim is to help tackle fuel poverty, but this is a corporate sleight of hand.

While people nationwide face massive bills and the UK’s biggest energy supplier makes excessive profits, Centrica’s charity aids those struggling most with handouts, normalising unaffordable energy bills and stigmatising those who can’t afford them. With Centrica starting to pay dividends to shareholders for the first time in three years, the company needed this PR move to pacify upset customers.

GREENWASH AND THE HYDROGEN LOBBY 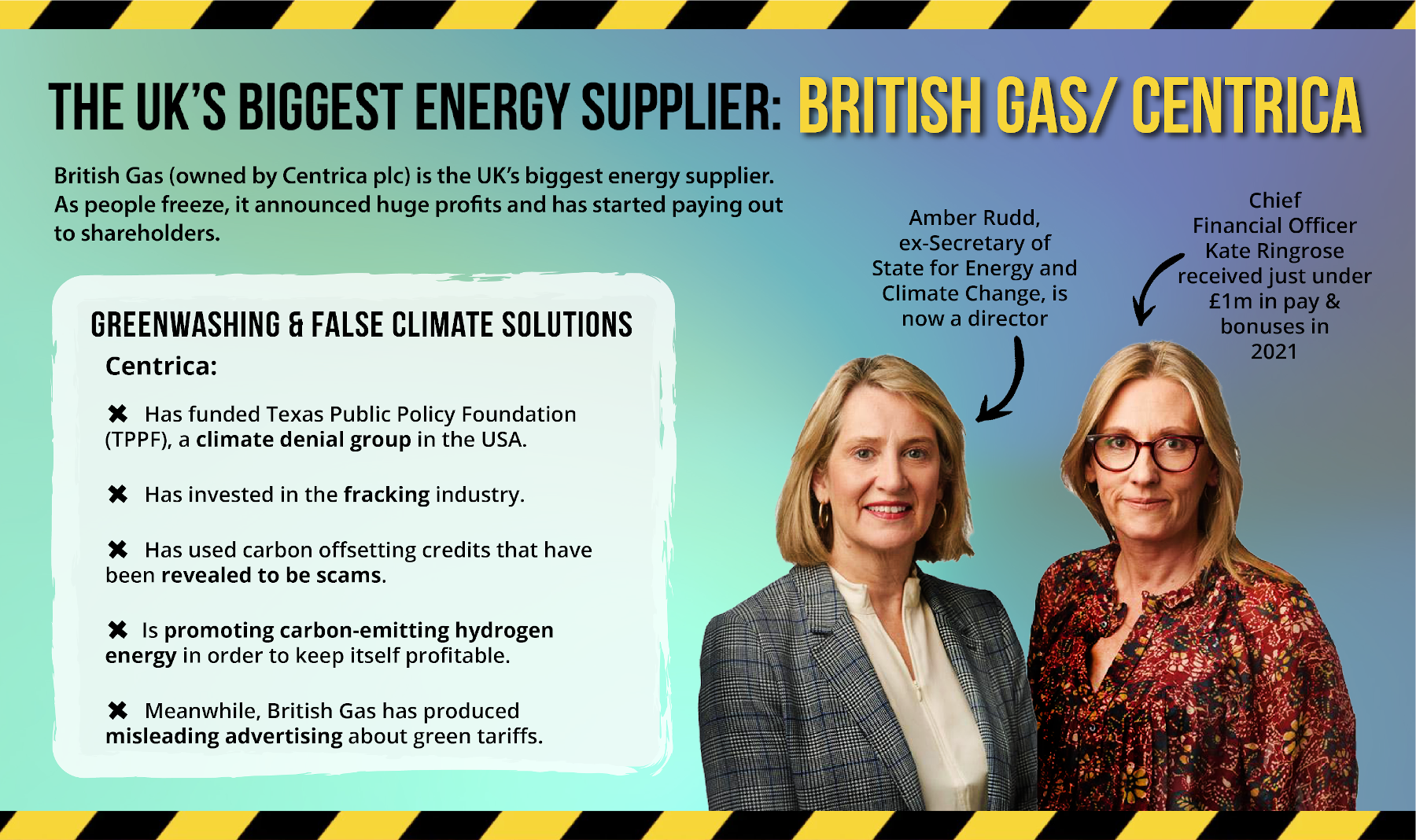 Centrica has been using carbon offsetting as a way to market itself as “green” despite being a fossil fuel company. According to an openDemocracy investigation on British Gas:

Under one [carbon offsetting] scheme Centrica buys into, a firm has declared ownership of a chunk of the Amazon that actually belongs to an Indigenous tribe, and is demanding a ransom fee not to deforest it.

The openDemocracy investigation also found that almost half of the carbon offsets held by Centrica were in actual fact bought from a chemical factory in China that was accused of cheating the system.

Whilst claiming green credentials via a so-called “People and Planet Plan“, the company has used its profile and government access to quietly promote an anti-environmental agenda. In 2016, it was found to have donated tens of thousands of dollars to the Texas Public Policy Foundation (TPPF) a US-based climate denial group with links to Donald Trump.

The company has used the rising cost of fuel to call for the scrapping of environmental policies such as the green levy (an environmental tax on energy bills to finance carbon-saving initiatives). Meanwhile, Centrica – which has also been an investor in the UK fracking industry – has even used the energy crisis to suggest that the government reopen the debate on fracking, which is currently subject to a moratorium.

Like many companies in the UK gas industry, Centrica has been advocating for the adoption of “hydrogen-ready” boilers, claiming this technology will “help us to reach net zero together”. It was part of the “Hydrogen Zone”, a large display at the 2022 Labour Party Conference which promoted the fuel. According to campaigners, hydrogen-ready boilers would still largely run on natural gas, and simply don’t compare to solar or wind power in terms of energy efficiency or sustainability. However, the hydrogen option would be far more profitable for Centrica, as it would rely on the continued use of gas industry infrastructure. It seems that lobbying is having an effect; the government is now considering requiring that all boilers be “hydrogen ready” from 2026.

According to the company’s latest annual report, Centrica received nearly 2000 more complaints from customers in 2021 than the previous year. Back in 2011, British Gas was handed a £2.5 million fine by energy regulator Ofgem for not dealing with complaints properly, and one has to wonder whether its record in that department has improved since then. A survey by the GMB Union in 2021 showed that 95% of British Gas’ workers thought that the company was mis-selling to customers, something for which it has also been fined.

In early 2022, British Gas failed to fix customers’ boilers for months in the dead of winter – leaving thousands cold and without hot water.

According to a freedom of information request lodged by the Telegraph newspaper, British Gas has been granted more than 186,000 warrants in the last five years to replace customers’ energy meters with prepayment alternatives. This means 2.6% of its 7 million customers were forced to have pre-pay meters, almost triple the industry average of 0.9%. Smart meters can also be changed to pre-payment meters remotely to circumvent the need for a warrant, which energy providers did 100,000 times to UK households in 2021.

Pre-payment meters can turn electricity and/or gas off once the money has run out, leaving vulnerable people (such as the elderly, or individuals dependent on electricity to charge a ventilator or wheelchair) in a potentially dangerous situation. They are also more expensive than paying standard energy bills, plunging people deeper into fuel poverty.

MPs have singled out British Gas as having a “heavy-handed approach” due to the sheer volume of warrants the company has obtained. A recent Ofgem report named British Gas as one of the 17 energy suppliers that need to do far more to support vulnerable customers.

DOES THE COMPANY HAVE CLOSE RELATIONSHIPS WITH THE GOVERNMENT?

According to Transparency International, Centrica has met with UK prime ministers on 14 separate occasions since 2012. In that same period, company representatives also attended at least 234 meetings with government ministers.

A 2016 investigation by Unearthed shows that Centrica employed three people with links to the Conservative Party in its communications team. According to the report:

Before becoming the company’s director of public affairs in September 2014, Sarah Richardson was a Conservative Party election candidate for the European Parliament in 2004 and 2009, and ran to be an MP in 2005. She was also a long-time Conservative Westminster councillor.

The report also highlighted how one of Amber Rudd’s key 2015 speeches on the phasing out of coal – in favour of gas and nuclear – bore a suspicious resemblance to a Centrica document published the previous year.