Throughout October Corporate Watch will be taking a critical look at the top six UK energy suppliers, in solidarity with the millions of people who are struggling to keep warm now that energy bills have risen once again.

We ask: who is profiting from supplying our energy? how much are the bosses getting paid? and how have these companies been cosying up to government?

We will be releasing our alternative company profiles of Big Six energy suppliers in reverse order over the coming weeks. You can see our first profile on Scottish Power here. Next up?

EDF is the fifth biggest energy supplier in the UK currently controlling over 10% of the market. The French multinational is best known for “leading the UK’s nuclear renaissance” operating all eight of the UK’s nuclear power stations.

EDF is owned by Electricity of France S.A. (Électricité de France, EDF). A multinational energy producer and supplier primarily (and soon to be solely) owned by the French government. It is one of the world’s top five utility companies.

Created in 1946 by the French government, EDF was set up with the intention of rebuilding France’s power grid following World War Two. Now, 70 years on, EDF has branched out a lot further than France, cashing in on energy users from the USA to India. The group is now made up of 144 subsidiaries.

Despite its name, EDF isn’t just in the energy business. EDF is also involved in the data software, vehicle traceability, investment, and real estate sectors, to name just a few.

EDF uses strategic partnership deals to build its brand, for example, the company is a Premium Partner (and official energy supplier) for the Olympic and Paralympic Games in Paris in 2024.

How many UK energy customers does EDF have?

EDF Energy (UK) Ltd is ultimately owned by EDF SA, a French company which is majority owned (84%) by the French government and listed on Euronext, the French stock exchange.

In July 2022, the French government announced it would buy out the outstanding 16% of EDF’s shares, reversing the partial privatisation of the company in 2005. But it hit a brick wall when investors threatened to sue the government for losses. The French state started finalising their buyout of 100% shares in EDF in September. But at what price? The other shareholders are demanding a fortune, with the government set to pay a total of 9.7 billion euros (£8.7 billion) of French taxpayers’ money. It’s worth noting that the shareholders set to cash in from this nationalisation are investment giants Blackrock and Vanguard Group.

Is EDF suffering as a result of the cost of living crisis?

But what about the future? EDF is predicted to stack up 100 billion Euros (£87.8 billion) in debt this year and the French government already pumped €3 billion (£2.6 billion) into the company in Spring. But as you’ll see below, no matter how bad things are there’s always room to give the CEO a pay rise.

Jean-Bernard Lévy, the current CEO of the Group, is due to leave six months early after a fallout at the top between Lévy and French president, Emmanuel Macron, over nuclear energy. Lévy is – however – unlikely to be out of a job after EDF. He was formerly CEO of weapons company Thales, and media company Vivendi, and even did a stint as a technical adviser to a government ministry. In 2020, Lévy was listed as the 9th highest-paid CEO in the utility sector worldwide taking home a salary of €450,000 (£389,500) and €3,660 (£3,150) in benefits.

Moreover, Lévy’s probable successor, Luc Remont, cherrypicked by Macron (whose appointment is just waiting for parliamentary approval), will start on on a lucrative footing after the French Government announced that it would like to increase the new EDF CEO’s salary to attract more candidates. The company CEO’s salary is currently capped at €450,000 (£389,500). Whilst no figure has been publicly stated, the EDF Group is known to pay high salaries. In 2013 it was revealed that former UK CEO, Vincent de Rivaz, received a pay package of £1 million annually in remuneration.

Simone Rossi has been at EDF since 2004, Rossi switched roles from Head of the International Division to UK CEO in 2017. But Rossi’s influence goes far beyond the British Isles. As a member of the Executive Committee, Rossi is at the very top of the EDF Group. At first it appears Rossi accepted a big pay cut, with a 2017 payment package capped at just over £100,000. A modest salary in comparison to his predecessor, de Rivaz, who was on £1 million a year. But it is highly probable that Rossi’s remuneration is now identical to de Rivaz at £1 million, as the highest-paid director in EDF Energy Holdings Ltd.

It’s not just customers at the receiving end of EDF’s profit-led strategy. Kashmir Singh, a Prospect trade union organiser, has been fighting against workplace racism and discrimination for half a century. Singh was presented with a 50-year long-service award in 2021 by Simone Rossi. But Singh’s union released a statement explaining how, during his career, he had been subject to two grievance and disciplinary proceedings for daring to raise EDF’s failure to hire and promote staff from Asian or Black Ethnic (ABLE) backgrounds.

Political donations in the UK 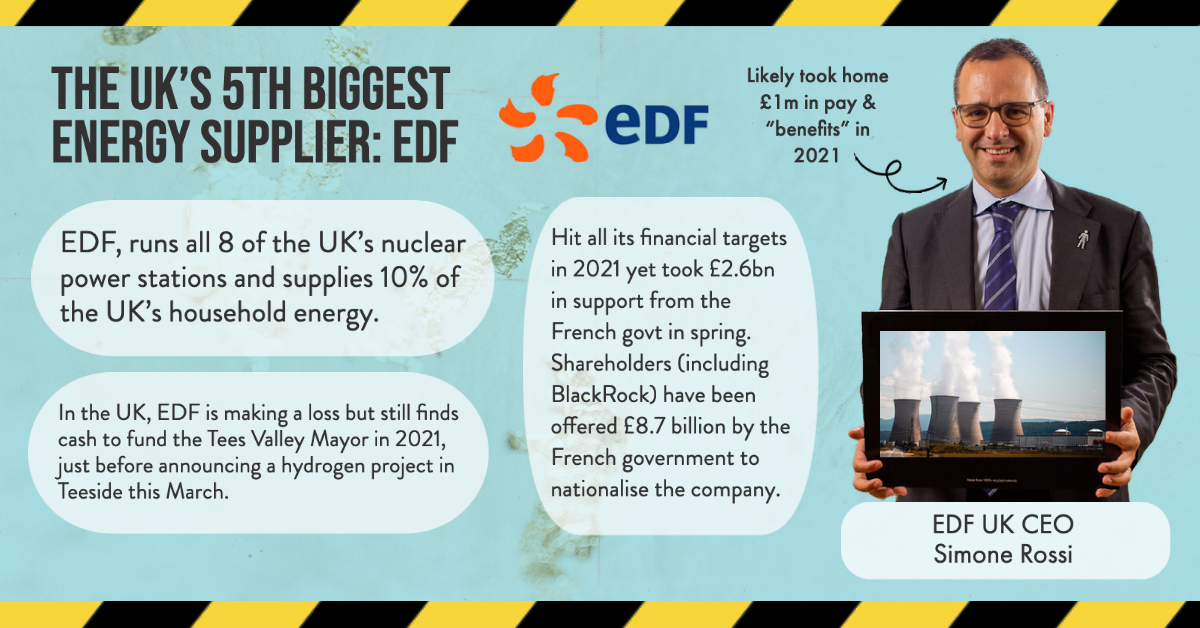 Over the last two decades, EDF has funded the Conservative party to the tune of £38,499.

EDF also made two £6,000 in donations to the Labour Party in October 2003 and September 2005. The timing of these donations coincided with Labour PM Tony Blair’s announcement in November 2005 that the government was looking into new nuclear for the UK’s future energy supplies. This set the ball rolling for EDF’s £18 billion government contract for the construction of Hinkley Point C power station.

Does the company have close relationships with the government?

Over the last decade, EDF has been getting cosier and cosier with the government. The company has had at least five independent opportunities to promote its agenda in meetings with UK prime ministers, once with David Cameron and four times with Boris Johnson. Company representatives even had an intimate one-to-one with Johnson in January 2022 to chat about the UK’s nuclear energy supply, which EDF holds the monopoly over.

Since 2012, company representatives have also attended at least 151 meetings with government ministers, including 24 solo meetings with the former Secretary of State for Business, Energy and Industrial Strategy, Kwasi Kwarteng, who is now the Chancellor of the Exchequer, the person in charge of UK economic policy.