Home
/
Environment
/
What does the Heathrow runway plan mean for future of detention centres? 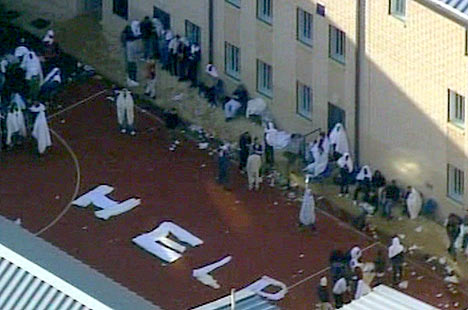 In June, the UK government approved the plan to build a third runway at Heathrow Airport. Amidst all the controversy, one detail has not been discussed much beyond local Surrey news: the Harmondsworth and Colnbrook detention centres will have to be demolished to build the new runway.**

The Heathrow expansion scheme would push the airport out to the North, towards the village of Harmondsworth. That includes the land where the two “Immigration Removal Centres” currently sit. Together, they form the UK’s biggest immigration detention complex, with space for 1,065 prisoners. They are run by the private contractor Mitie in a £240 million deal set to run until 2022. (See our Detention Centres Briefing for further information.)

The Department of Transport (DFT) policy statement on the plans includes a section on the detention centres. It explains that “continuous service provision of the IRCs at Heathrow is necessary”, and so “replacement facilities in substitution for the affected IRCs should be provided prior to any works”.

In short: they would build new replacement centres, which would have to be ready before the old ones are shut.

The final consultation document on the plan, published in January 2018, says that the replacement prison(s) will be built on one site. It identifies a shortlist of four possible sites, two further north and two further south, but all still close by the airport. (See here, page 95 for full details.) Notably, all the four sites are on greenbelt land, which will mean special planning permission is required.

The DFT document adds that local councils should be involved in planning the new replacement prisons from an early stage:

“The applicant should discuss the provision to be made in substitution for the existing IRCs with the Home Office and any local authority whose area is likely to be affected by a replacement facility.”

Already the local authority for one of the proposed sites, Spelthorne Borough Council, has come out “categorically” against rehousing the prisons. Its chief executive has said: “We are categorically not discussing the prospect at all because we have made it categoric that we will not abide having such a centre on our patch.”

The third runway scheme is intended to be in place by 2026. Which would mean work on new detention facilities would have to start quickly to be in place before demolition. However, the third runway scheme isn’t settled yet. Legal challenges are now underway, with a High Court judicial review hearing expected to begin in March 2019. There is still a chance the plan could be reversed, and it seems unlikely the Home Office will move on new detention plans until it’s certain.

One factor in all this could be Labour’s shadow chancellor John McDonnell, who is the local MP. McDonnell is a strong opponent of the runway plan: he supports the legal challenge, and has even called for “direct action” if that doesn’t work. As far as we are aware, McDonnell has not yet made any comment on the future of the detention centres. (But in the past, he has been known to champion the cases of people locked up in the centres.)

In May 2018, McDonnell’s colleague Diane Abbot (shadow home secretary) announced that Labour would close Yarl’s Wood and Brook House, the two detention centres which have been worst hit by recent scandals. But she said nothing about the Heathrow centres.

If the runway does go ahead, it will be disastrous for the people of Harmondsworth village, and indeed for all of us on our overheating planet. But could it at least cause some problems for the detention system?

Looking back over the history of struggles against detention centres in the UK, here is one fact that stands out. Aside from the 2002 Yarl’s Wood revolt which permanently destroyed half of that centre from the inside, no campaign has managed to shut down an existing detention centre. But campaigns have successfully stopped new ones from opening, for example using a mixture of grassroots local resistance alongside legal, planning, and political challenges. (See our “brief history of resistance to immigration detention ” for more on these points.)

On the other hand, even if current legal challenges fail, the huge opposition to the expansion scheme is not likely to just disappear. Could environmental and migration campaigners come together around the future of Harmondsworth, and make this a fight not just against the runway but also against the vicious prisons that sit in its path?

** Detention Forum have raised the issue on twitter, we haven’t seen further discussion yet amongst migration campaigners.