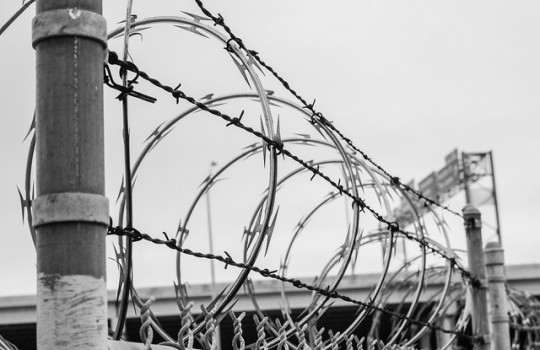 By Calais Research Network. While the UK’s plans for the “Great Wall of Calais” hit headlines, an even bigger Calais security deal has gone quietly unnoticed: an £80 million privatisation of much of the border security in Northern France.

While the UK’s plans for the “Great Wall of Calais” hit headlines, an even bigger Calais security deal has gone quietly unnoticed: an £80 million privatisation of much of the border security in Northern France.

Without any fanfare from the Home Office, an advertisement appeared on the European public tender website “TED” on 9 July.[2] It requested companies to bid for an estimated £80 million contract to provide “40 Authorised Search Officers, 24 hours per day, 365 days per year” for the Eurotunnel, Calais and Dunkerque ports. Three of the staff on duty must also be trained as “detainee custody officers”, responsible for holding arrested migrants in the Home Office’s detention facilities at the ports before they are handed over to French border police.

This is by far the biggest private security contract yet announced for Calais. It also signals a massive privatisation of border security: these jobs are currently done by Home Office Border Force officers. The exception is management of the detention “holding facilities” at the Eurotunnel and Dunkerque. This is already outsourced to Tascor, a Capita subsidiary, as part of another mammoth border security contract for all deportation “escorting” and short term detention facilities. That contract is also currently up for re-tender. The Home Office also has smaller private contracts in Calais for security dog handlers, won by a company called Wagtail, and with security company Eamus Cork Solutions in Dunkerque.

The deadline for applications for the new mega contract has now expired, on 18 August. There hasn’t yet been an announcement about who hit the border guard jackpot. Besides Tascor, other favoured Home Office contractors include G4S, Serco, Mitie and GEO, who all run detention centres on the UK mainland.

In more detail, the contract includes:

“vehicle searching (freight and tourist vehicles), searching of persons, detention and escorting services. The Contractor is required to provide teams of Authorised Search Officers who will: search vehicles by using detection technology or by working collaboratively with another Contractor contracted to provide detection dog teams; and escorting functions which may require the detention of an individual, for a period which is as short as is reasonably necessary and which does not exceed 3 hours, pending the arrival of a Border Force Officer or other authority to whom the individual is to be delivered.”

To put this deal into context, here are some of the largest previous funding announcements about “security” in Calais in the past years, which don’t reach £80 million between them:

Footnotes
1. The Calais Research Network is a new network set up to investigate the border system at Calais and the corporations profiting from it, in which Corporate Watch is participating. This article was originally published on Calais Migrant Solidarity.
2. http://ted.europa.eu/udl?uri=TED:NOTICE:241269-2016:TEXT:EN:HTML&src=
3. Mentioned here: http://ec.europa.eu/dgs/home-affairs/what-is-new/news/news/2015/20150831_1_en.htm
4. Some breakdown of how this was spent is provided here: https://www.whatdotheyknow.com/request/253987/response/654102/attach/3/34419%20Brooks%20Final.pdf
5. www.bbc.com/news/uk-33992952
6. Calais doesn’t seem to have been the main focus in the use of these funds, however. They have been used primarily for deportations in the UK: https://www.gov.uk/government/uploads/system/uploads/attachment_data/file/542335/AMIF_Project_List_July_2016.pdf
7. http://www.bbc.com/news/uk-33992952
8. http://ec.europa.eu/dgs/home-affairs/what-is-new/news/news/2015/20150831_1_en.htm
9. http://www.france24.com/en/20160303-hollande-cameron-calais-migrants-drone-deal-franco-british-summit