This year, Kurdish singer Nûdem Durak was sentenced to ten and a half years in prison. She was arrested and imprisoned on 22nd April 2015. Her family say she was falsely convicted of being a member of the Group of Communities in Kurdistan (Koma Civakên Kurdistan or KCK).  She was also accused of helping people to join the outlawed Kurdistan Worker’s Party (PKK) and helping to organise demonstrations in 2009 against Turkish military repression of Kurdish people in her hometown of Cizre, North Kurdistan (the part of Kurdistan within Turkey’s borders).

The KCK was set up by the PKK in 2007, as an umbrella organisation for Kurdish people living in Iran, Iraq, Turkey and Syria. Its aim is to achieve ‘democratic confederalism’ within Kurdistan. The Turkish state considers the KCK an illegal terrorist group and has arrested thousands of people since 2009 for membership or association with the organisation.

The trials of supposed KCK members have targeted people involved with Kurdish political parties and movements and have often hung on flimsy evidence. For background see here.

Nûdem’s family says that the real reason she was arrested is because she sings in Kurdish and tries to keep Kurdish culture and language alive. There is a long history of repression of Kurdish language and culture in Turkey, from the burning of thousands of Kurdish villages during the 1990s to the Turkish state’s current hydroelectric dam projects, which flood Kurdish villages. The Ilısu Dam project, if completed, will flood 199 Kurdish villages and leave important Kurdish historical sites underwater.

Kurdish people were banned from speaking, writing and learning Kurdish after the establishment of the Turkish Republic in 1923. Even the words ‘Kurd’ and ‘Kurdistan’ were banned, and Kurdish citizens were known as ‘Mountain Turks’. Since the 1990s there has been a relaxation of the suppression of the language but there are still many restrictions on its use. Nûdem’s case shows that Turkey still implements a brutal repression of those who seek to preserve Kurdish language and culture.

According to the Human Right’s Association (IHD) 2014 report for Eastern and Southeastern Anatolia, there were nine instances of “violations against using native language” and four people reported being denied the right to a legal defense in their mother tongue during 2014. These actions are intended to erase Kurdish identity, language and culture, in order to achieve the Turkish state’s nationalist goal of assimilation. Nûdem‘s arrest should be seen in this context. 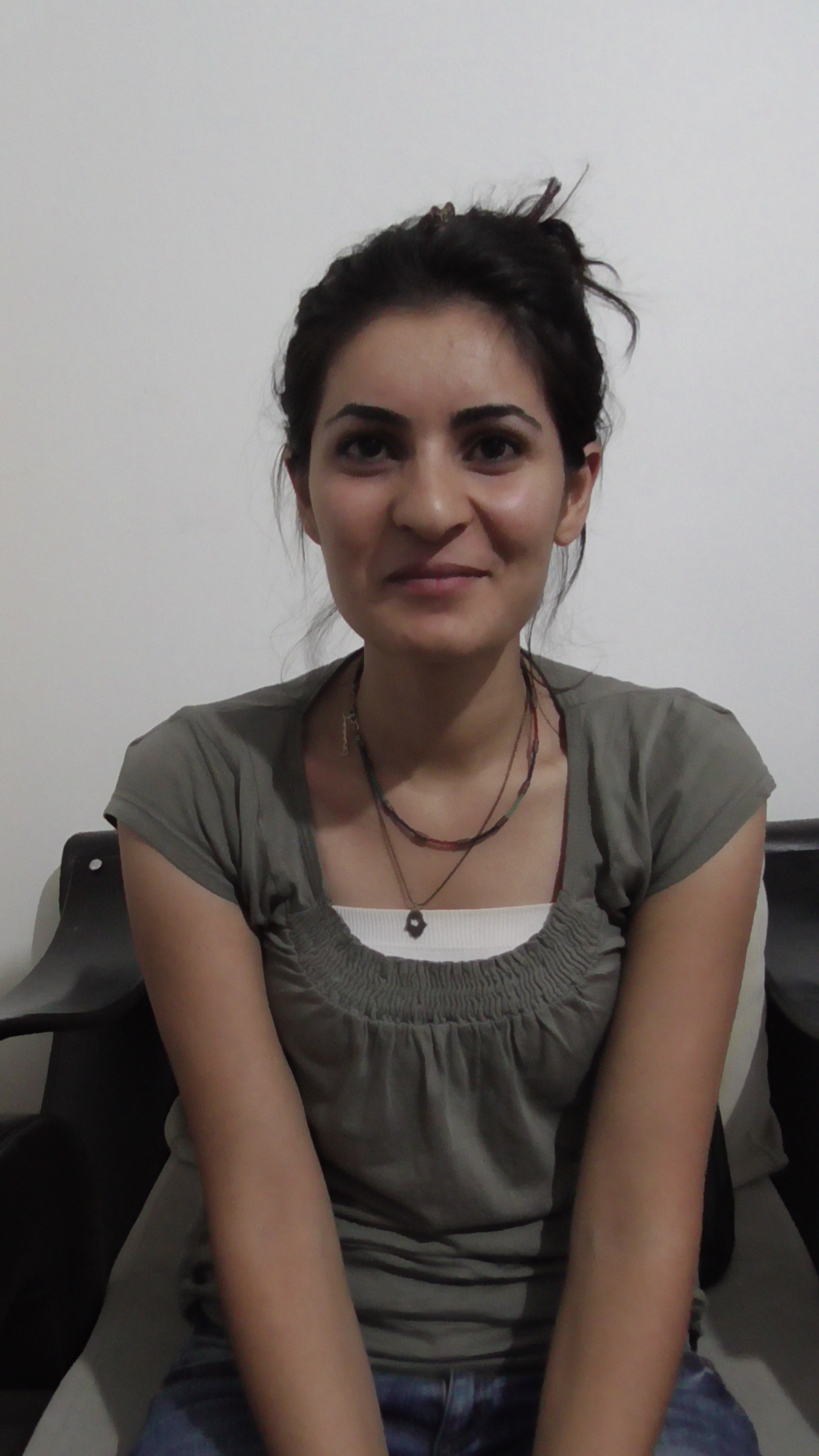 Can you tell us about Nûdem?

Nûdem is my big sister. I’m 20 years old and she is 26 years old. She’s a local singer, popular in Cizre, Şirnak, Mardin and Amed. She sings in Kurdish, but sometimes in Turkish, and her songs are about freedom, nature, autonomy and the Kurdish language. She also sings songs for children. She was very small when she starting singing, maybe 12 years old. She started singing at the Mem û Zîn cultural centre in Cizre. She sings in a group and she performs in Kurdish festivals, like in Newruz, the Kürt Kültürünü Yaşatma festival and during protests. She performed at a festival for the survival of Kurdish culture and to protest the burning of Kurdish villages in the ’90s.

When was she arrested?

She was last arrested on 22 April 2015. She was going to Mardin in a car and on the way she was arrested by the police. They took her to Mardin prison and that’s where she is now. They said that she is in the top management of the KCK, the bigger organisation above the PKK. It is a lie. Everybody knows the names of the KCK management. Nûdem is not a member of the KCK. Even if you wanted to be you couldn’t be. You need 20 or 30 years of experience with the PKK to be a member.

Why did they really arrest her?

They arrested her because she is Kurdish and because she sings in Kurdish. Kurds are forbidden to speak Kurdish in Turkey. They want to destroy Kurdish culture. They banned Kurdish education and our language. Nûdem has tried to keep our language alive. Everybody loves Nûdem in Cizre. She’s a phenomenom here. She was first arrested In 2009 and spent 6 months in prison. Then in 2012 she was arrested again and spent one year in prison. After that she was freed [on bail], but in 2015 she was sentenced to ten and a half years in prison.

Can you visit her in prison?

Three friends and family can visit. Every week you can see her through a screen and talk on the telephone. One time per month we can see her face to face without the screen. We can see her for 60 minutes.

Her psychology is very bad. She loves her freedom. She could have gone to Europe and other countries but she didn’t want to leave Kurdistan.  She could have crossed illegally [out of Turkey].

Can she appeal to the court?

The appeal was denied.

How does the family feel?

We are very sad. We are in a bad psychological condition, especially because it’s out of our hands. We cannot do anything about it.

Is there a campaign in solidarity?

There is a campaign on Facebook, but it isn’t very big – only our Cizre friends. There are thousands of examples of people like Nûdem in prison. Everybody has seen this happening to others. There is no need to commit crimes in Turkey to be arrested. Being Kurdish is enough. For example, a child was sentenced to ten years in prison just for throwing stones. We have sent the file to the European Court of Human Rights and we are expecting a reply.

Friends of Nûdem helped to make a film about her case. Watch it here – https://www.youtube.com/watch?v=w8rCzzyVwz8

Take action in solidarity with Nûdem:

– The Turkish state has tried to silence Nûdem’s music. Make sure her voice gets heard by sharing her music. A lot of her music can be found on the internet. For example at https://www.youtube.com/watch?v=qcA4QLmd0_s

– Hold a solidarity demonstration outside the Turkish embassy in your country calling for the release of Nûdem.

– Sign the Avaaz petition in solidarity with Nûdem at https://secure.avaaz.org/en/petition/Recep_Erdogan_Free_Nudem_Durak/?pv=3

– if you use social media, tweet about Nûdem using the hashtag #NûdemDurak

Kurdish people living inside Turkey’s borders suffer repression by the Turkish police and prison system. During our trip to North Kurdistan in 2015 we spoke to ex-prisoners, human rights organisations and the Tay-Der prisoners’ organisation about the situation for prisoners. All of them highlighted the need for international solidarity. First of all, they asked for activists outside Turkey and Kurdistan to make people aware of the situation for Kurdish prisoners.

They asked people to help them campaign:

– For the release of sick prisoners – According to the Istanbul branch of the Human Rights Association (IHD), more than 600 prisoners are sick and 220 are so sick that should be released according to law. Many prisoners die in prison because they are unable to access proper treatment. For example, According to the IHD, Mehmet Cappole died in prison in 2015. He had already served 20 years and should have been released due to his poor health. Similarly, Abdullay Okçay died of cancer in prison last year. He should have been released too.

– For an end to child imprisonment – The IHD reported 444 detentions of children during 2014. A recent report revealed that Onur Önal died after a beating by other inmates in Maltepe prison in Istanbul in 2014. He had been imprisoned alongside people convicted of sexual crimes.

– For the release of Abdullah Öcalan – Many Kurdish organisations and ex-prisoners asked people outside Kurdistan to campaign for the release of Öcalan, the leader of the PKK who was arrested in 1999 and given a death sentence, which was later reduced to life imprisonment. They also asked people to campaign against Öcalan’s isolation. In the UK, the Peace in Kurdistan campaign is supporting the campiagn to free Öcalan (http://peaceinkurdistancampaign.com/resources/abdullah-ocalan/free-ocalan/).

According to a campaign statement: “Öcalan is indispensable to resolving the Turkish-Kurdish conflict. But he cannot fulfill this role from prison, due to the onerous conditions and the extremely restricted communication he is at present entirely cut off from the outside world.”

– For solidarity with the families of prisoners – On top of being separated from their loved ones, these families endure financial hardship. Kurdish prisoners are transported into prisons in Western Turkey, far away from their families. Their families are often unable to pay for travel to visit their relatives. According to one ex-prisoner, “90% of these prisoners are from very poor famiies and they need help. For example, one prisoner I know is from Wan [close to the border with Iran] but they sent him to prison 1800 km away, so the family can’t afford the tickets and they cannot see their son.”

– Kurdish prisoner solidarity groups and ex-prisoners have asked for people outside Kurdistan to launch joint campaigns with them to highlight these issues.

Kurdish ex-detainees we spoke to told us that the vehicles that were used to transport prisoners between prisons were manufactured jointly by Isuzu and Otokar.

Isuzu is a Japanese multinational company headquartered in Tokyo. Its main business is manufacturing and marketing vehicles and engines. Its Turkish subsidiary, Anadolu Isuzu (http://www.anadolugrubu.com.tr/GroupCompanies/7/103/automotive-group), is owned by Anadolu Group, a holding company which also manages the Migros, McDonalds, Coca-Cola and Efes brands in Turkey. Corporate Watch witnessed the Turkish riot police using Isuzu buses to transport officers during the repressive policing of a demonstration to commemorate the second anniversary of the Gezi uprising. Corporate Watch contacted Anadolu Group to ask whether the company considers that “it is ethical to provide vehicles to the Turkish prison service, bearing in mind the Turkish state’s repression of detainees?”. We received no reply.

Otokar boasts that it is “the main supplier to the Turkish Military Forces” of vehicles. Otokar, part of the Koç Group, is also a manufacturer of buses for public transportation in Europe. The company is currently working hard to market its products outside Turkey. According to a company spokesperson: “Otokar aims to become one of the key players in the European market.” The company has supplied public buses for use in France, Italy, Germany and Spain since 2008.

We interviewed Kurdish ex-prisoners about whether campaigns against companies supplying the Turkish prison system would be a good strategy for solidarity with Kurdish people. The people we spoke to were positive about the idea. Ömer Önen, a co-representative for the People’s Democratic Party (HDP) who had previously spent three years in Turkish prisons, agreed that there was a need to target these companies: “As a system we support democratic modernity, so we are against capitalism and our system is alternative to the others. We are struggling against all these companies too, as they are all parts of capitalism”.