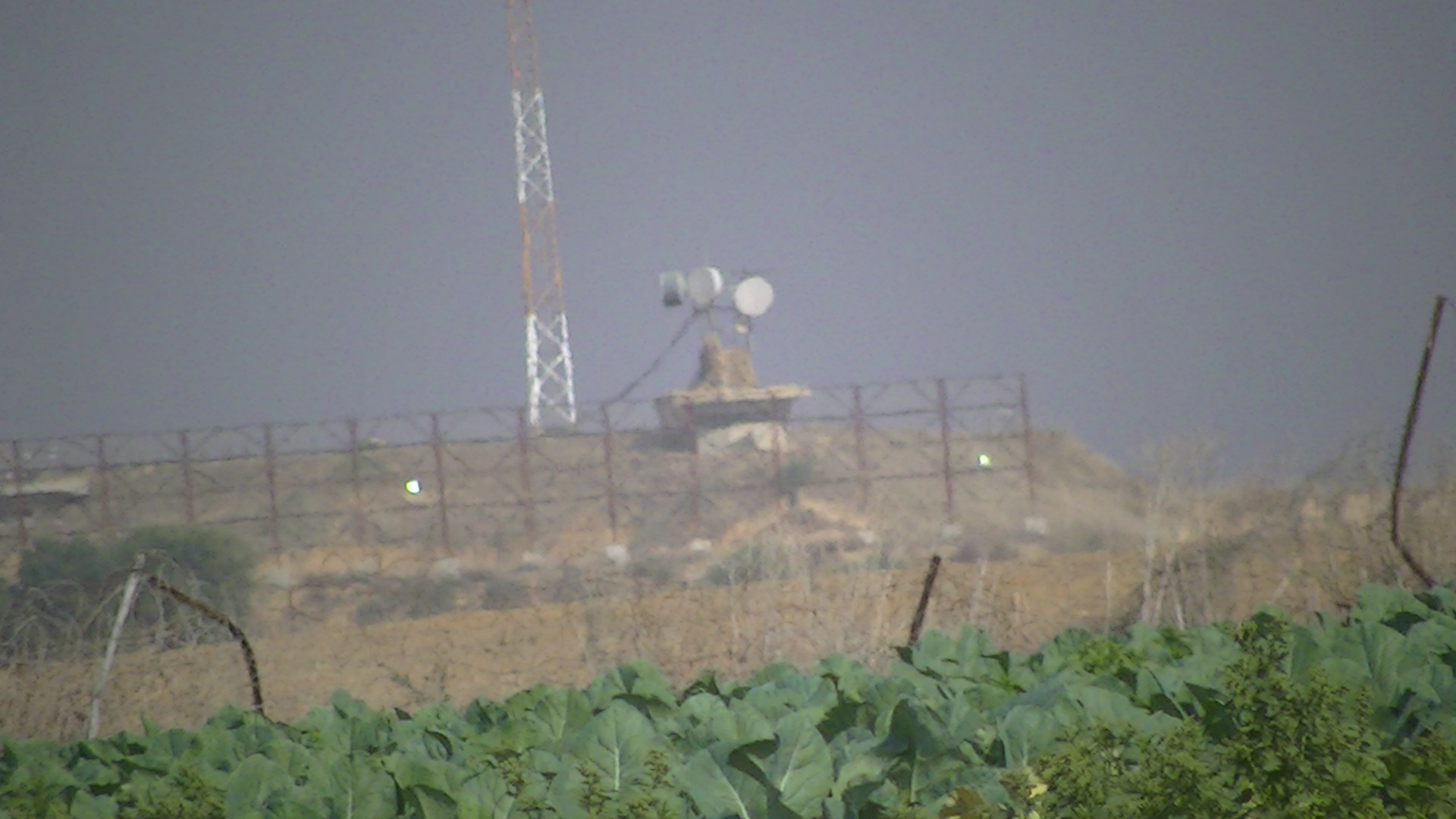 International action has been called for in solidarity with prisoners held in Israeli jails. Corporate Watch has been investigating the companies involved in the Israeli prison system and interviewing ex-prisoners. This interview is part of a series of articles which will be released over the coming months focusing on companies providing equipment and services to the Israeli Prison ‘Service’ (IPS).

We met ‘Salah’* at his home in Beit Hanoun in the Northern Gaza Strip a few weeks after his release from seven years prison in Israel. A celebration tent had been set up in his house since his release. We wanted to speak to Salah about the conditions for sick patients in Israeli jails, the particular problems for prisoners from Gaza and the complicity of international companies like G4S and Hewlett Packard in the Israeli prison system. The Ketziot prison where Salah spent some of his period of imprisonment has been receiving services from British/Danish company G4S since 2007.

The effects of Israeli air attacks are never far away in Beit Hanoun. As his sons and grandsons bring us tea to drink, Salah tells us that during the Israeli bombardment in November 2012 his grandson ‘Hisham’, who was three and a half years old, “was playing a little way away from a government building. The building was struck by an F16 and rubble hit him on the head. He was in intensive care for seven days.” We are invited to feel the soft patch in Hisham’s skull where he was injured. Salah goes on to tell us: “My son ‘Abed’, now 20 years old, was in the street when the group of boys he was with was targeted by an Apache [helicopter]. One of them was killed and 18 injured. Abed’s hand was amputated, he is seriously psychologically affected.”

When we defended our children, our homes and our homelands

Salah tells us that he wants to tell us the story of what happened when, as he puts it, “we defended our children, our homes and our homelands”. “I was arrested during the first intifada [uprising] and detained under administrative detention for four months. During my arrest I was hit on the head with a stone. While I was interrogated they tortured me by squeezing my testicles. I was released for ten days then detained without charge again for another two years. During that period I remember one of the soldiers pissed on the ground and then scooped up the urine and forced it to my mouth. During the interrogation they hit my legs and toes with sticks.” He rolls up his trouser leg and shows us his bent and scarred legs and feet.

He goes on to say that in November 2006 the “Israelis invaded [Beit Hanoun] and ordered all the men aged from 15 to 50 to gather in one place and asked for our IDs. When they came to me they looked at my ID, then they told me to take off all my clothes except my underwear. They made me walk around several times, it was embarrassing. Then they arrested me.”

At the time of his arrest Salah was being treated for a heart problem. He was taken to the Beit Hanoun (Erez) checkpoint where he was detained for three days, then they took him to Ashkelon prison where he was allowed to see a doctor. The doctor said ‘that he would not be responsible for what happened during interrogation’ as Salah ‘might die’ due to the weakness caused by his health problems. Despite this Salah was interrogated continuously for ten hours. During the interview he had a pain in his chest. They gave him painkillers but the interrogation continued.

Salah told us: “I spent 35 days inside the interrogation cells without any medical care. During my interrogation my health deteriorated. The last part of the interrogation was non-stop for 17 hours – I was exhausted. When it was over they forced me to sign documents in Hebrew which I didn’t understand.” “They accused me of being a leading figure in Fatah and of membership of the Al Aqsa Martyr Brigades [an armed resistance group aligned to Fatah] and of inciting the Al Aqsa Martyr Brigades. I told them that I had nothing to do with these things.” “In Bir al Saba [Beeersheva] prison in 2007 I had a heart attack. They put me in a prison vehicle similar to an ambulance but I was on a stretcher handcuffed and leg-cuffed and wearing an oxygen mask. When I got to Bir al Saba hospital I said ‘where am I, where am I?’ But they didn’t tell me anything. I stayed there for a few hours. The doctors in the hospital didn’t communicate with me, they just spoke to the soldiers. Then I was driven back to the prison. I asked what the doctors had said about my condition when I returned to the prison. I was told by the officer that he could not tell me anything about my health, as it was a security matter. I had to return to the hospital regularly. It took more than nine hours from the hospital to the prison. I asked to be transported in a proper ambulance but they refused.

In 2012 when I was being taken to hospital one of the guards slammed the door on my legs on purpose. The other guard said to him, ‘why did you do that?’ The first guard answered, ‘he is a dog, don’t worry about him.’

I was always protesting about inappropriate medical care and because of this they constantly transferred me from prison to prison. Painkillers and water drinking are the only solutions they give to medical problems when you bring them up. I met with the International Committee of the Red Cross inside the prisons. I explained to them about the conditions. They made promises but it seemed like it was only slogans, only words.

During the 2012 hunger strike I was in Nafha prison. I was too sick to participate in the strike. The guards tried to make people eat. I saw how they did this. Me and the other sick prisoners threatened that if the Israelis did not meet the demands of the other prisoners we would join the hunger strike and not take food or water.

When I was in the prison clinic getting oxygen I saw the Israeli units kicking and punching the hunger strikers. The guards had food with them and were telling them to eat.

I saw doctors telling the hunger strikers: ‘if you do not stop your hunger strike we will not give you your medicine.’ It was like a battle of defiance between the Palestinian prisoners and the IPS. If an inmate did break the hunger strike the guards tried to humiliate them. Sometimes our clothes were taken and we were left in our underwear. They invaded our cells all the time.

The lives of the people on hunger strike were worth nothing – but what can you expect from people who kill children?”

After the election of Hamas in 2006 and the power struggle between Hamas and Fatah, which ended with Hamas remaining in control of the Gaza Strip, the Israeli military decided to end all visits to Israeli prisons by the families of Palestinian prisoners from Gaza. According to Salah, “From 2006-2012 I received no visits. Then, after 28 days of the hunger strike there was an agreement under the supervision of the Egyptians. The IPS agreed to allow some family visits. I received visits about every 2 months”. The number of visits received by prisoners from Gaza is still limited by the IPS.

Salah was imprisoned in Ketziot in the Naqab (Negev) for three years. G4S have a contract to supply equipment and services to Ketziot. Salah told us that the conditions in Ketziot were particularly bad: “We were kept in the caravans. There were three sections to Ketziot: tents, caravans and cement huts. One of the Israeli officers at Ketziot came to my cell and threatened to kill me, another of the guards there took a stapler and fired a staple into my head.

When they invaded our cells in Ketziot they shot tear gas grenades and used pepper spray. They sprayed canisters of gas into the cells. There was a bad smell – you would wash your clothes but the smell would still linger for days. It made you sneeze. Some people lost consciousness because of this. During that time in Ketziot they no longer distinguished between the healthy and the sick and the elderly. My friends used to put me under the bed to protect me because I was weak and they were afraid that I would be killed. I was also imprisoned in Ramon and Ohalei Keidar prisons.”

‘From a small prison to a big prison’

“When I was released they said ‘let it be the last time for you Salah’. They claimed they could get me back easily if I caused trouble. Since my release I am very nervous, I cannot bear to hear any loud noise. I prefer to be alone.” As he describes this Salah begins to cry. “I have gone from a small prison to a big prison, here there are drones in the sky and the crossings are closed.

The British government should put pressure on Israel to release the prisoners – it is Britain’s responsibility. Administrative detention is their law and the Balfour Declaration started all the problems. I would like the international community to continue their efforts to raise awareness of the conditions for people in Israeli jails.

G4S and other companies should be prosecuted and pursued in the International Criminal Court, they are making money out of the crimes being committed against the Palestinian people.”

A group of doctors has called for a boycott of the Israeli Medical Association in line with the Palestinian call for boycott, divestment and sanctions. The call is on the basis of the IMA’s complicity in torture and Israeli violations of the rights of the civilian population under the fourth Geneva Convention. Dr. Derek Summerfield, a British supporter of the boycott, said it was justified as many Israeli physicians were complicit in the occupation’s crimes. According to Summerfield, one Israeli physician had confessed that he had “removed the intravenous drip from the arm of a seriously ill Palestinian prisoner, and told the man that if he wanted to live, he should co-operate with his interrogators.”

One way to act in solidarity with sick prisoners is to support calls for the Israeli Medical Association’s expulsion from the World Medical Association over its complicity in Israeli militarism and apartheid. For more details see www.boycottima.org Or you can join the campaign against G4S, click here to find out more.