MagForce (or Mag Force) International is a military equipment manufacturer based in the Parisian suburb of Aubervilliers. It sells uniforms, armoured vehicles, gun boats and crowd control weaponry to armies and police forces around the world. It has repeatedly breached arms trade regulations.

You can find our 2014 Company Profile of the company and other articles on Magforce in the right hand column of this page.

There is also lots of useful information on MagForce’s website:

For a more critical perspective on Magforce’s work try the Campaign Against the Arms Trade website, Disarm DSEI and Jason Parkinson.

The company is directed by Robert FRANCHITTI (pictured above) and Catherine DELAGE (see video below).

Torture tools on show in Europe

Clarion, the event organisers, issued a press statement on 11 September 2013 explaining that:

“DSEI takes the issue of compliance very seriously and once we became aware that Tianjin Myway International Trading Co. and Magforce International had breached British law, their stands were immediately shut down and their staff ejected from DSEI. The literature in question has been confiscated and examples passed to the authorities for further assessment. DSEI’s compliance team is also looking into the matter further”.

The promotion of these items is banned under the UK Export Control Order 2008. This classes them as Category A weapons because “their primary use is to facilitate torture or other crimes against humanity”, according to Oliver Sprague, Arms Control Programme Director at Amnesty International UK.

He concluded: “I am in no doubt that these are prohibited items of torture and to display them at DSEI 2013 was a clear breach of the Export Control Order 2008 as they relate to the promotion of Category A goods”

Mark Mastaglio, a forensic scientist and firearms expert, has inspected MagForce’s general catalogue, which can be downloaded from the company’s website and appears to be the same as the one that was exhibited at DSEI 2013.[1]

Mastaglio concurred that on, “page 92, E, of the MagForce International catalogue are what appear to be leg restraints/fetters. It is my understanding that security and paramilitary police equipment such as leg irons and shackles are classified as Category A goods under The Export Control Order 2008.” 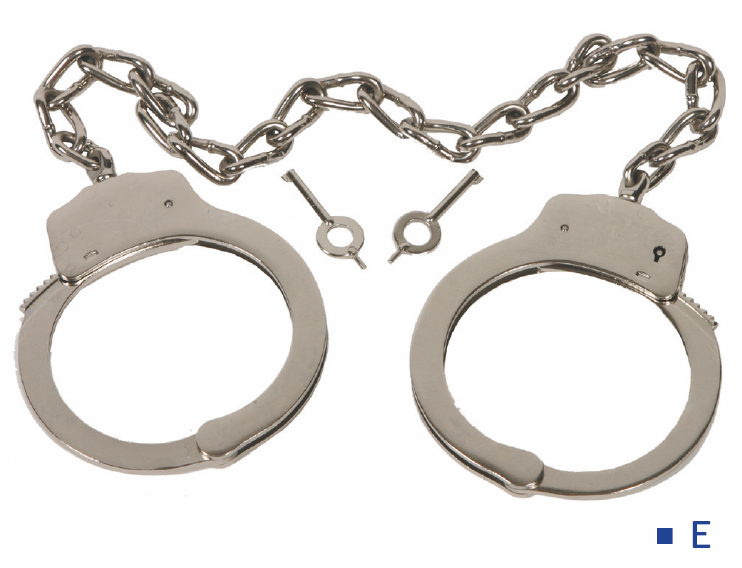 Mastaglio added that, “the MagForce International product G depicted on page 94 of their catalogue are clearly electronic stun batons. The description given in the catalogue is Bâtons de défense électriques/Electric defence truncheon.”

Mastaglio also noted that, “The MagForce International product D on page 95 of their catalogue is clearly a stun gun; the catalogue describes it as being Pistolet à impulsions électriques/Electrical impulse gun. 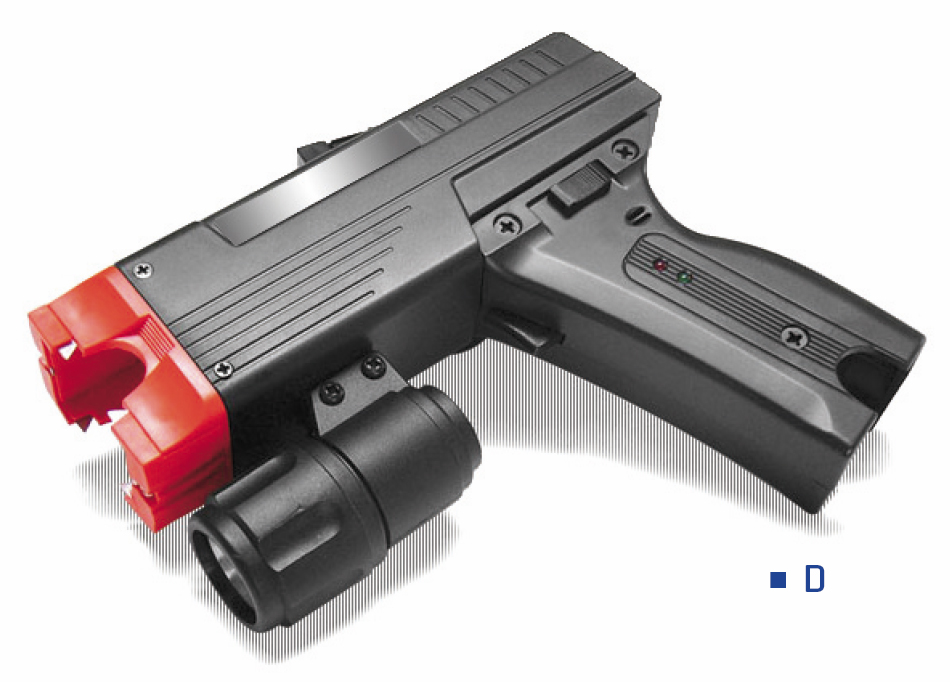 “These electric stun devices are marketed for police/paramilitary personnel use. The stun batons have dual functionality; they can be used as a conventional truncheon and they can be used to deliver a high voltage electric shock. The electrical impulse gun appears to be similar to the TASER issued to UK police; these devices can discharge two barbed darts at an individual who can then be incapacitated remotely by activating the stun circuitry.”

“The electrical discharge from stun devices such as those described above interferes with the nerve signals concerned with voluntary muscle control. Manufacturers claim a variety of physiological effects depending on where and for how long the discharge is applied. Typical human responses would include muscle spasm, pain, disorientation and collapse if the discharge was applied for long enough.”

“Stun batons, stun guns and TASERs fit the description of prohibited weapons as given in section 5(1)(b) of the Firearms Act 1968 and are also firearms as defined by section 57(1)(b) of the 1968 Act. Portable devices designed or modified for the purpose of riot control or self-protection by the administration of an electric shock (e.g. electric-shock batons, electric-shock shields, stun-guns and electric-shock dartguns) are classified as Category A goods under The Export Control Order 2008.”

Mastaglio even found tear gas weapons disguised as torches in the MagForce catalogue.

“Also depicted on page 94, A and B, of the MagForce International catalogue are two flashlights which are also designed to discharge lachrymatory agents. They are described as Lampes lacrymogènes/pepper spray flashlight. These are marketed for police/paramiltary use. In the UK such devices would also be prohibited weapons as defined by section 5(1)(b) of the Firearms Act 1968 and could also be viewed as a disguised firearm as defined by section 5(1A)(a) of the amended 1968 Act. 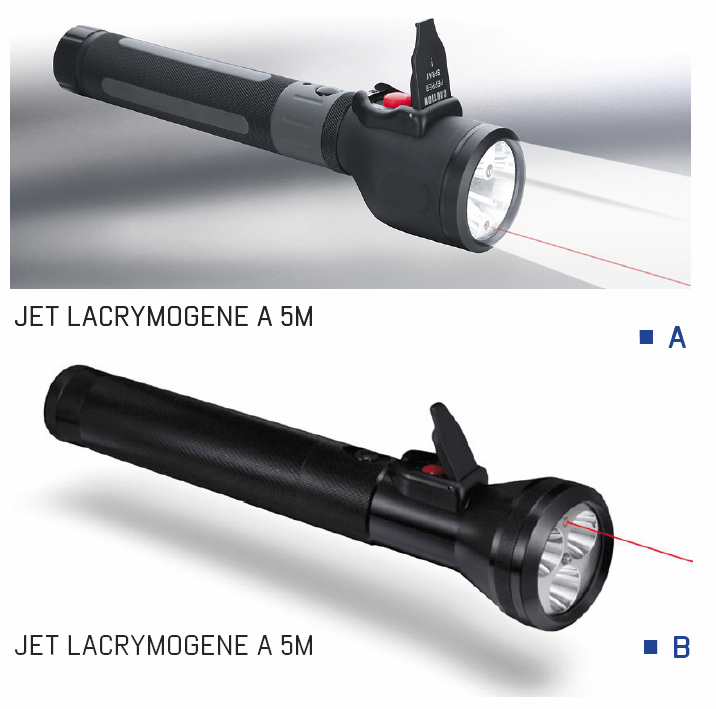 Lastly, Mastaglio highlighted the fact that, “Also depicted on page 95, C, of the MagForce International catalogue are two handguns that are designed to discharge 12-bore/50mm calibre cartridges containing hard rubber balls. Once again, these are marketed for police/paramilitary use. Tests carried out on this type of weapon have shown that at very close range the discharged projectiles can cause lethal injury. Consequently in the UK such guns are firearms as defined by section 57(1) of the Firearms Act 1968 and also fit the description of prohibited weapons as defined by section 5(1)(aba) of the 1968 Act. In my opinion the 12-bore/50mm calibre handguns would be subject to ML1 control under The Export Control Order 2008.” 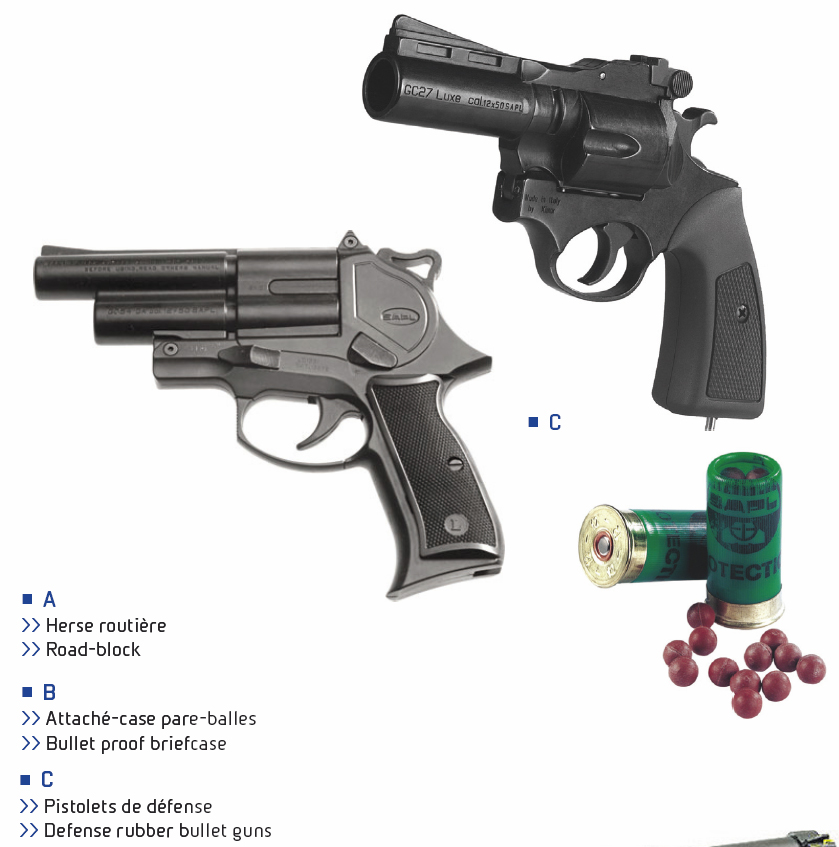 In addition to MagForce’s catalogue, various other companies have repeatedly displayed torture equipment at DSEI since 2005, without any action from the British authorities.[2]

MagForce exhibited the same catalogue again at the Milipol security industry event in Paris in November 2013, just two months after being ejected from DSEI.[3]

In March 2014, campaigners filed a private prosecution against MagForce for these breaches of UK arms export controls at DSEI 2013. However, the prosecution case stalled in July 2014 when the Crown Prosecution Service made it clear that it would not build a case against MagForce. The campaigners’ lawyers lampooned the “abject failure of the state to hold companies that allegedly break the law to account”.

MagForce sells other crowd control weaponry which, although legal, is ethically questionable. For example, Corporate Watch found that the MagForce website advertises a water cannon vehicle (Model BY5250GFB) which can be mixed “with foam, tear gas and coloring”. 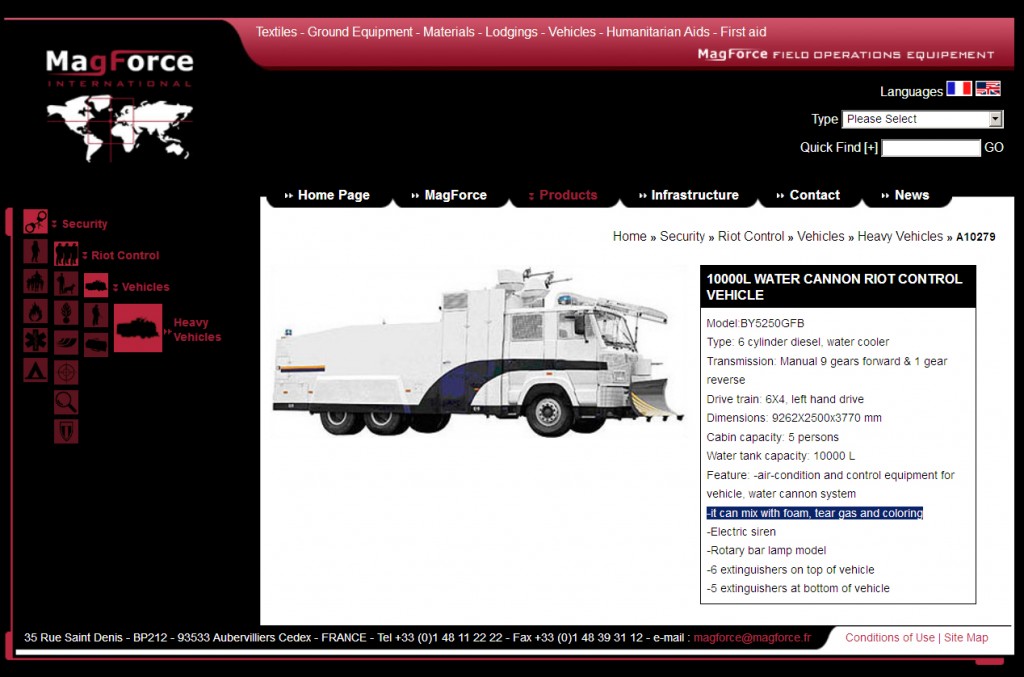 The MagForce International general catalogue also has a range of tear gas grenades and launchers on page 89.

Zodiacs exported to Ivory Coast in 2013

MagForce has sold military equipment to the Ivory Coast despite a UN Security Council arms embargo on the unstable West African country since 2004.

On 21 March 2013, UN monitors [1] in the capital Abidjan observed the delivery of eight boats from MagForce to the Ivorian Ministry of Defence. [2] The company’s shipment of Zodiac inflatable craft was photographed on the dock in Abidjan by the UN, below.

The contract for this shipment was signed on 23 November 2012, “under the sanctions regime adopted in resolution 2045 (2012), and reflects the purchase of two Sillinger model 470 UM [photo below] and eight Zodiac MK3 Grand Raid boats, all equipped with 40-cv engines”, according to the UN report.

Frédéric Lafont told the UN Group of Experts that he represented MagForce in the Ivory Coast, according to a report from March 2012.[1]

Lafont is a French Foreign Legion veteran who has run private security companies in the Ivory Coast since 2000.[2] 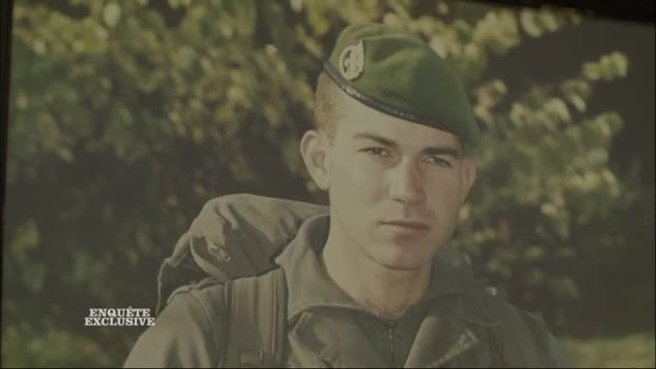 He did “a lot of business with former President Laurent Gbagbo”, and continued to prosper even after Gbagbo’s downfall. In late 2011, Lafont headed the companies Risk and Vision, which were the two largest private security employers in the Ivory Coast.[3] 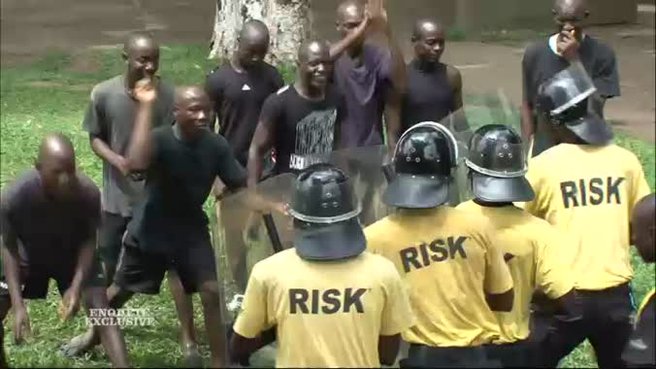 The UN experts said they had “documented with incontrovertible evidence the modus operandi of, as well as repeated violations to the sanctions regime carried out by a trafficking network that is composed of two groups: (a) Robert Montoya, Mikhail Kapylou, Frédéric Lafont and their respective companies; and (b) a para-institutional group of individuals, namely Kadet Bertin (former security adviser of Mr. Gbagbo, now living in Ghana) and Commander Anselme Seka Yapo.”[4]

(Lafont – pictured right- told the UN it was Montoya who had introduced him to MagForce President Robert Franchitti in late 2008 in Paris.)

Lafont’s network, with his business associate Montoya, had systematically supplied the Ivory Coast’s security forces with lethal and non-lethal equipment in contravention of the UN embargo. Both men were recommended for targeted sanctions by the UN Group of Experts in 2012.[5]

MagForce sold combat boots worth tens of thousands of euros to the Ivorian Interior Ministry in October 2009.[6] The supply of such equipment, albeit non-lethal, was still in contravention of the sanctions.[7]

A warlord’s welcome to Sierra Leone

In September 2012, MagForce was invited to Sierra Leone “to explore the business opportunities available in the country” by Ibrahim Bah (aka Ibrahima Bah, Ibrahima Balde, Ibrahim Baldeh or General Abraham).[1]

Bah has been subject to a UN asset freeze and travel ban since 2003, following his close relationship with Liberian ex-President and convicted war criminal Charles Taylor.[2]

Bah offered to introduce the MagForce delegation to “government officials and private sector entities”, according to Africa Confidential. Robert Franchitti, MagForce’s President, wrote to Sierra Leone’s Trade Minister Richard Konteh on 24 Spetemeber 2012 to thank him for the time given to the company’s delegation.