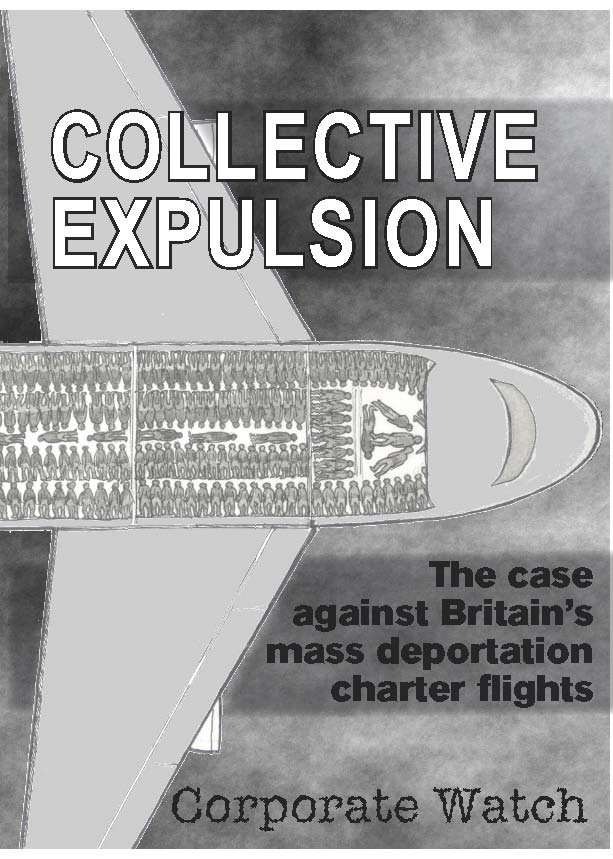 Corporate Watch has just released a new briefing on deportations, focusing on the Home Office’s use of charter flights, written by Phil Miller & Shiar Youssef. The 48-page briefing, entitled Collective Expulsion: The Case Against Britain’s Mass Deportation Charter Flights can be downloaded here, or you can buy a hard copy from the Corporate Watch online shop.

You can also read a review of our report on the Pluto Press blog here, as well as a photo-essay of a recent mass deportation charter flight for more information on the topic.

This report examines the British state’s most secretive and draconian immigration controls: mass deportation charter flights. The policy has existed in the shadows for over a decade, evading popular criticism and any meaningful review. Away from the public gaze, using specially chartered aircraft, the immigration authorities try to get rid of as many unwanted migrants as possible.

Indeed, these mass deportation charter flights are becoming the standard method of conducting enforced deportations to a growing list of destination countries. There is now at least one flight a week to ‘popular destinations’, such as Afghanistan, Pakistan and Nigeria, which are often closely linked to the UK’s most controversial foreign policy adventures. Yet, the programme was, and is still being, sold to the public on the basis of unfounded myths and outright lies, which have gone unchallenged for far too long.

The UK Home Office has used specially chartered flights to deport rejected refugees and migrants en masse for 12 years now. The policy was introduced in 2001 ostensibly to save ‘taxpayers money’ and effect high ‘volume removals’ of people who refuse to ‘cooperate’ with the immigration authorities. Officials have also claimed the programme was designed to send a clear message, both to the British public and to migrant communities, that the UK is serious about enforcing its ‘tough’ immigration policy.

This report examines in detail each of these and other deceptions underpinning the programme and debunks them using previously unpublished data covering the first 10 years of the programme. The sources used range from Freedom of Information requests, statistical analysis of official figures, court cases, government reports and media articles, in addition to case studies based on testimonies from migrants deported on these flights or organisations that worked with them.

Having debunked the myths, the authors then attempt to unravel the ‘ulterior motives’ behind the UK’s deportation charter flights, bringing to light little-known statements by government officials, secretive meetings and dodgy political deals. The motives examined range from a targets culture introduced by Labour and maintained by the current, Conservative-led coalition government, to the political agendas revolving around the UK’s foreign policy and its disciplining of migrant diaspora communities.

The next section explores a number of important legal questions concerning mass deportation flights, delving into the murky depths of European and UK case law, international treaties and other legal instruments. Among other things, the authors argue that deportation charter flights constitute a de facto policy of ‘collective expulsion’ and must, therefore, be prohibited. Even without this argument, a number of procedural issues that can be used to challenge the legality of these flights are also explored in detail. This is followed by two short sections on specific issues with significant legal implications: overbooking and the use of ‘reserves’, and the more recent use of monitors and doctors on mass deportation flights. It is important to remember that, unlike deportations on scheduled flights, there are often no commercial and procedural barriers to the exceptional, brutal policies and practices surrounding mass deportation charter flights. There are also no other passengers to witness what happens on these flights, as some passengers did in the famous case of Jimmy Mubenga, leading to shocking revelations about the use of fatal restraint techniques and racist language. On charter flights, immigration officers and private security guards can get away with virtually anything, as they often do, in order to enforce the government’s ‘tough’ immigration policy. Hence, this report not only calls for the immediate halt of the deportation charters programme on the basis of detailed factual findings and legal arguments, but also challenges different practices and procedures that have been institutionalised or taken for granted during the 12 years of this little-known-about programme.  A note on the language: throughout the report, the authors use the words ‘removal’ and ‘deportation’ interchangeably, even though the two terms have different meanings in law and official jargon. ‘Administrative removal’ is a power enjoyed by normal Home Office immigration case workers who can decide, as they often do, to remove someone from the country after their immigration or asylum claim has been refused. Deportation, on the other hand, is used for foreign national offenders who have been sentenced to a criminal sentence of 12 months or more and are then deported – whether with or without a court order – as a second punishment because they are ‘not conducive to the public good’.

The interchangeable use of the two terms, or using ‘deportation’ for both, is a conscious choice: the authors of the report believe deportation should not be an administrative power or an additional punishment (the latter issue is explored in depth in the section on foreign national prisoners). The same goes for the interchangeable use of immigration prisons, (administrative) detention centres and immigration removal centres (IRCs), as they are officially called now.

In a similar vein, the terms ‘migrants’ or ‘migrants and refugees’ are often used by the authors for all types of migrants, unless a legal distinction is necessitated by a specific context. Derogatory, stigmatising and often inaccurate terms, such as ‘failed asylum seekers’, ‘illegal immigrants’ and so on, are used by politicians and the media to divide migrants into ‘good’ and ‘bad’ ones, legitimate and illegitimate, then demonise and illegalise those who do not not fit one of these artificially constructed, politically motivated categories. The authors believe that people choose or are forced to migrate for a wide variety of reasons and should be able to travel and live wherever they want or need to.

Whilst writing this report, the UK Border Agency (UKBA) was split into two separate operational units: Visas & Immigration and Immigration Enforcement. It is the latter that is responsible for most of the policies and practices covered in this report (detention, deportation, etc.). The head of the unit is David Wood, who also features in the report as the previous head of Criminality and Detention within the UKBA.

Thanks are due to Frances Webber, Juliane Heider, Bethan Bowett-Jones, Amanda Sebestyen, Sita Balani and everyone else who helped us with this report, whether by providing information or financial support, reading or commenting. Thanks are also due to the detainees and deportees who shared their tragic experiences with us. It is to them, and all the other migrants and refugees who have faced and will face similar fates, that we dedicate this report.