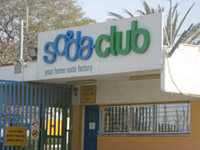 UPDATE 09/04/2014 – Response from Oxfam America: Oxfam claims that “Fenton does not do any work for SodaStream at this time. It had a one-year relationship with the company that ended in 2012. Oxfam did not begin to work with Fenton until 2013.” Since this article was written Fenton Communications have removed the Sodasteam logo from their website.

If Fenton’s relationship with Sodastream ended in 2012 it begs the question: why was the Sodastream logo listed on the company website last week?

There has been a lot of negative media attention in the last few months on Sodastream, an Israeli fizzy drinks company with a factory in the illegal Israeli settlement of Mishor Adumim. A partnership between Oxfam and Scarlett Johansson ended recently after an international campaign put pressure on the charity to end its relationship with Johansson because she was undertaking ongoing work for Sodastream.

However, a high profile US public relations (PR) firm, which boasts of its “ethical business practices”, is providing services to both Sodastream and Oxfam America. Fenton Communications states on its site that “We do not take on clients that we do not believe in ourselves” and claims that it works “for companies and foundations advocating social change”. Fenton’s corporate social responsibility rhetoric and greenwash doesn’t bear more than a few minutes of scrutiny. The PR firm has a client list which includes large multinationals such as General Mills and Unilever. General Mills jointly own the General Mills (Pillsbury) plant in the Atarot settlement Industrial zone, while Unilever only pulled out of the Barkan settlement industrial zone after years of pressure from the boycott, divestment and sanctions movement. Both companies are also responsible for selling, marketing and lobbying hard for processed foods globally, which are damaging to people’s health. One of Fenton’s other clients is Oxfam America.

In response to the public campaign about Scarlett Johansson, Oxfam stated: “While Oxfam respects the independence of our ambassadors, Ms. Johansson’s role promoting the company SodaStream is incompatible with her role as an Oxfam Global Ambassador… Oxfam is opposed to all trade from Israeli settlements, which are illegal under international law.” Why then does Oxfam America find it acceptable to work with a PR firm that includes Sodastream on its client list?

It is not surprising that Sodastream feels the need for a PR firm. The company sells consumer products, marketing them as ‘green’. It relies on maintaining a positive public image. The international boycott campaign against the company has been growing apace and is taking its toll. Sodastream has reported a loss in the last three quarters and its share price is suffering.

Why not contact Oxfam encouraging them not to work with a PR firm doing business with a company working in Israel’s settlements: