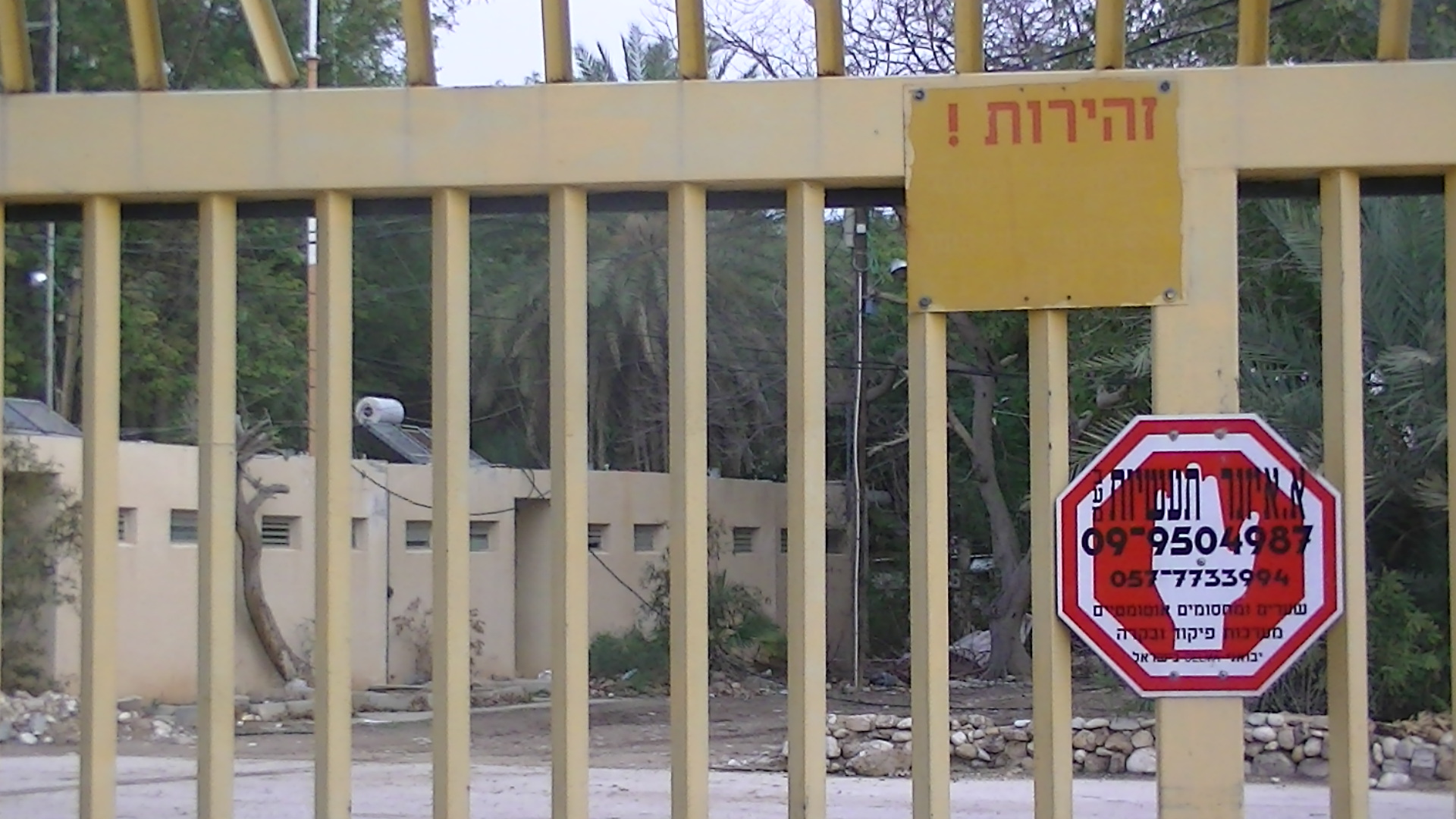 During January and February 2013 Corporate Watch conducted interviews with Palestinians who work in the illegal Israeli settlements in the Jordan Valley. Part one of our findings can be viewed here.

We met Fares*, Younes* and Jammal* near the Northern West Bank town of Tammoun in February 2013. Fares and Jammal were 23 years old at the time and Younes was 20. They had been working as agricultural labourers in the Israeli settlements in the Jordan Valley settlements for between nine and seven years. All three workerd in the settlement of Beit Ha’Arava, close to the Dead Sea in the Southern Jordan Valley. According to our interviewees Beit Ha’Arava used to supply fresh produce to Carmel Agrexco before its liquidation in 2010, now the settlement grow the majority of its produce for the Arava and Edom export companies.

Fares, Younes and Jammal come from the Palestinian village of Tayasir in the North of the Jordan Valley. Their work is arranged on a daily basis by Fadi*, a Palestinian intermediary who receives payment from Israeli settlers for supplying them with workers. Fadi deals with settlers in Na’ama, Beit Ha’Arava, Beqa’ot and Mehola.

Fadi tells us, “My family had 175 dunums of land in the Jordan Valley but after the occupation it was taken and now it is part of Sdemot Mehola settlement. I have seen the settlers using the land to raise cows and plant flowers.”

Work begins at 6am. The Palestinians work a 7 and a half hour day with a half hour break. No pay is received for the break.

Palestinian workers in Israeli settlements have been entitled to the Israeli minimum wage since an Israeli Supreme Court ruling in 2007 (see here). In 2010 Corporate Watch conducted over 40 interviews with settlement workers showing that Palestinians are consistently paid as little as half the minimum wage and sometimes even less. These conditions remained largely unchanged when we returned in 2013.

The current hourly minimum wage is 23.12, NIS (New Israeli Shekels). The equivalent of 184.96 NIS for an eight hour working day, having risen from 20.7 NIS in 2009. An Israeli government website advises that workers are also entitled to 14 days paid holiday and must receive a written contract and payslips from their employer (see here). However, for Palestinian workers on Israeli settlements in the Jordan Valley these conditions seem an impossible dream.

Fares and Jammal are paid 65 New Israeli Shekels (NIS) a day, or roughly 8.12 NIS per hour, well under half the Israeli minimum wage. Younes is paid 65-70 NIS a day.

In Beit Ha’Arava the workers we spoke to are not given time off on Muslim holidays, only Jewish ones despite Israeli government stipulations that workers should get religious holidays off according to which religion they practice. They do not receive any paid holiday at all. They also receive no written contracts.

Younes has worked six days a week in Beit Ha’Arava since he was 13. “I work in the greenhouses tending to peppers and tomatoes. I didn’t go to school since I was 13.”

Fadi tells us that he arranges for children under the age of 16 to work in the settlements in the Valley. According to Fadi “There are 15-23 under 16s working all year round in Beit Ha’Arava and up to 40 in the school holidays, they are employed to pick peppers, chillis, dates and tomatoes”

Fares tells us: “Children work alongside me in Beit Ha’Arava, they get the same pay as me and they do the same jobs as the adult workers. They do dangerous work operating machinery and picking dates.”

Trade unions are forbidden in Beit Ha’arava. According to Jammal: “they will sack us if we even think about unionising”

One way that the employers try to get around giving workers their legal rights is by requiring workers to sign papers stating that they are being treated properly within the law, when in fact this is far from the case.

Fadi tells us that: “in Beit Ha’arva the workers must sign papers saying that they have already received their annual pay rise before they begin working. I give the workers these papers to sign. I don’t force anyone to sign them but if they don’t they cannot work”

Other workers report being asked to put an imprint of their fingerprint on an empty sheet of paper, which they suspect is another way of signing away their legal rights.

According to Jammal: “I signed a paper saying that I had already received all of my annual incremental pay and that the settlement would not be responsible if I get injured while at work“.

Fadi adds: “The papers also say that the workers’ daily salary is 136 NIS”.

Jammal tells us “I work high up on the trees picking dates. Its dangerous, we have no rope or harness and no helmet. Often people are injured by the spikes on the trees. My brother was injured by a needle from a date palm. He was pushed into the needles by a machine he was using. He had to take two days off and he didn’t receive any sick pay”

According to Younes: “We use chemicals to spray the date palms but we are not given any masks or protective clothing to wear, the chemicals have made me sick several times. I have not been paid for the time I have been sick.”

Success of the boycott campaign

According to Fadi “During the campaign against Agrexco and around the time of the attack on the Mavi Marmara, Beit Ha’Arava produced 2500 tonnes of grapes, only customers from Russia bought them, while customers from other countries refused. The remaining grapes could only be sold on the local market. A kilo or grapes is exported for 35 NIS but sold locally for only 6 NIS so Beit Ha’Arava lost a lot of money.”

This loss of sale affected the workers. Fadi tells us that the workers only worked 10 day out of 40 during that period. However Fadi says that “The campaign was good as when the settlement economy is destroyed the settlers will leave. They are only here for business.”

*We have used pseudonyms in this article to protect our interviewees