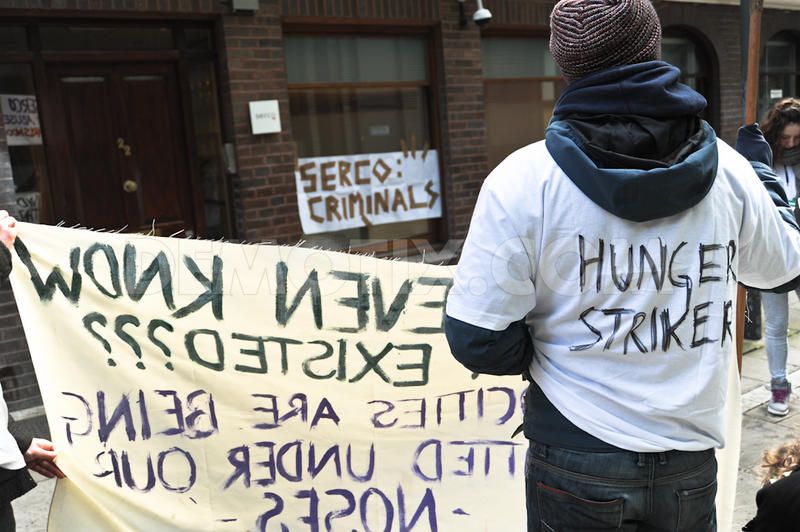 An ongoing mass hunger strike by migrant women detained at Yarl’s Wood immigration prison in Bedfordshire has prompted solidarity protests and actions across the country, including noise demos and pickets outside the London offices of Serco, the private security company that runs the prison on behalf of the UK Border Agency (UKBA).

The hunger strike, which began on 5th February and involved some 84 women at the start, was sparked by detainees protesting against their prolonged detention and inhumane treatment at the hands of the Serco security guards and the immigration authorities. The hunger strikers’ demands included an end to the “physical and mental torture at the centre” and “all false allegations and misrepresentations by the UKBA regarding detainees”; an end to the detention of children and their mothers, rape survivors and other torture victims and to the separation of children from their mothers.

Two and a half weeks on, at least 20 women are still on hunger strike, while others have stopped but are refusing to eat the “repugnant” food provided by the prison management.

On 8th February, Serco security guards tried to break up the protest by force. Some 70 women were locked in a corridor for up to 8 hours without access to food, water, toilet or medical care. Many collapsed and about 20, who tried to climbed out of the windows, were beaten up and taken into isolation cells. Four of the women, singled out as ‘ringleaders’, were taken to Bedford police station and subsequently transferred to HMP Holloway in London, without being charged with any offence or brought before a judge.

Testimonies by Yarl’s Wood detainees, many of whom have fled torture, rape and destitution, have revealed that racial, psychological and physical abuse had been inflicted on the hunger strikers by Serco staff. One hunger striker, who had been in isolation for 14 days, was transferred from Yarl’s Wood to Colnbrook detention centre, near Heathrow airport, on 21st February after being handcuffed and dragged by five security guards. During a demonstration at Yarl’s Wood on the same day, protesters spoke to some of the detainees on the phone and many said the Serco management was “punishing” detainees or “retaliating” by treating them “aggressively” and providing them with “disgusting” and “repugnant” food, which many were refusing to eat. Others said they were being subjected to “physical and psychological torture” and “racist abuse” and confirmed earlier claims that detainees were being called abusive names, such as ‘black monkey’, by Serco guards (see here for more details).

One of the demonstrators, who preferred to remain anonymous, said, “As if it weren’t enough to lock up innocent people for such lengthy periods in such horrible conditions, thereby destroying their lives and families, those who dare to protest against their inhumane treatment are punished with even more brutality.” He added that companies like Serco, “are not only allowed to profit from people’s suffering, they also often get away with these kind of medieval and clearly unlawful acts.” Asked what he expected to happen next in light of all these allegation, the protester commented, “the Home Office will claim they take all allegations of mistreatment very seriously and promise another investigation that will never materialise.”

A similar mass hunger strike at Yarl’s Wood in June last year was met with violent assaults on detainees by Serco security guards. Between 30 and 40 guards reportedly stormed in and started to remove men involved in a sit-in in the corridor separating them from the women and children. Many detainees who witnessed the incident reported that “excessive force” was used. Two women, who had their cloths ripped off, were also violently removed. A guard was reportedly seen filming one of the semi-naked women. The husband of one of the women was badly injured and, in the struggle, her child, aged 19 months, fell from her back and was stepped on by one of the guards. One of the women detainees later described what happened on that day to campaigners, “I have never ever seen such violence. They were beating the men like they were animals.”

Last year, during a demonstration at Serco’s Holborn offices, a protester managed to sneak a look through the window at an internal Serco document titled ‘Incident (protestor) response plan’. The document, photos of which were posted on the internet, revealed that the security giant was expecting protests and was preparing by developing a plan that outlined “the responses of all occupants of the Serco Hand Court building should a protest develop outside the building.” Funnily enough, the document instructed all building occupants to “ensure all confidential data (electronic and paper) is securely stored, limiting the amount of paper data open and available on desks.”