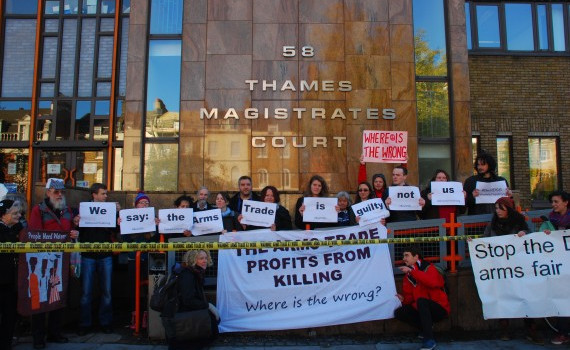 By Stop the Arms Fair

This February, several activists are on trial for taking action against the DSEi arms fair. The intention was to stop the arms fair from being set up by blockading roads used to transport military equipment and weaponry into the Excel Centre.

The DSEi arms fair hosted arms companies from more than 50 countries, with around 1500 exhibitors registered as selling arms, missiles, fighter aircrafts, tanks, military electronics and warships, as well as surveillance and riot control equipment. Around 30,000 buyers and sellers came from countries such as Saudi Arabia, Turkey, Bahrain, Israel, Mexico and Colombia.

Hundreds of people have come out in support of the activists on trial, leaving messages of support on the Stop the Arms Fair website.

This includes an open letter written by activists in Palestine, who
highlighted the way that the DSEi arms fair promotes Israeli weapons sales and their ‘battle-tested’ weapons. The letter is a good reminder of the human impact of the arms trade, and how the arms fair that takes place in the sterile Excel centre of East London, has very real consequences on people’s lives. And how arms fair attempt to legitimise a military industry which allows countries like Israel to develop and market systems for long-term surveillance, drones and weaponry which result in death and injury.

The activists on trial for taking action against the DSEI arms fair stand in solidarity with people all over the world fighting against state and corporate repression and fighting for economic justice and the simple right to live in peace.