If governments and corporations get their way, the bright blue seas of western Greece will be turned into oil fields. From Corfu in the north to Crete in the south, the Greek government has sold off contracts to drill for oil and gas in giant zones covering almost the entire Ionian Sea, as well as neighbouring areas on land.

These have been snapped up by oil multinationals Total, ExxonMobil and Repsol, and also by smaller players including a hungry new Greek-Israeli-British company called Energean. But it’s not a done deal yet. Greece has strong traditions of resistance to capitalist devastation – and now, across the threatened areas, people are coming together to fight the oil plans.

In solidarity with this resistance in Greece, we’ve written an in-depth report on Energean: read it here. This article gives a quick introduction to what’s happening.

For more information (in English and Greek) see the Save Greek Seas website.

If you’re in or near Athens, the Pan-Hellenic gathering against oil and gas extraction is taking place this Saturday 28 September (here’s the poster in Greek): 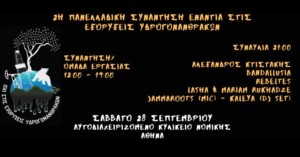 As the world climate crisis accelerates, it is plain madness to burn up more oil and gas. But the Greek plan seems even more unhinged than most. It threatens to devastate marine life, including habitats of dolphins, sea turtles, monk seals, and the only breeding and nursing ground of the Mediterranean’s sperm whales. And it threatens the pristine beaches and coastlines loved by millions of human visitors too.

This makes the scheme crazy even in economic terms, as it threatens Greece’s tourism industry: the mainstay of the country’s economy, and the source of livelihood for many. Plus other key industries such as fishing and agriculture. But in the logic of capitalism, short-term profits for corporations and their investors count for more than the needs of wildlife, natural environments, or the vast majority of human beings.

So the Greek government is powering ahead with plans to revive the country’s oil and gas industry. Like other parts of the Greek economy, this had stalled as foreign investors stayed away during the economic crisis. But now Greece is “open to business” again, as the country gets out of the EU bailouts and returns to what passes for normality in the financial markets.

Currently, Greece only has one working oil field in the north-eastern gulf of Kavala. But in the last five years the government has been auctioning off a rash of new “concession” contracts for multinationals to explore for oil and gas over vast new areas.

In 2014, the Greek parliament signed and ratified concessions for three “blocks” or areas: the Ioannina block onshore, in the north-western region of Epirus; and the Katakolo and Patraikos blocks offshore. Since then, the companies have been carrying out test drilling and “seismic surveys” – involving the likes of explosions or airgun echo soundings which can cause acoustic trauma and death of marine life. As the companies strike black gold, these will be turned into 25 year drilling contracts.

Also in 2014, the government announced it was putting three more onshore areas up for sale – the Arta-Preveza, Aitoloakarnania and North West Peloponese “blocks”; as well as a vast stretch of sea divided into 20 “blocks”.

In the midst of the economic crisis, it didn’t find buyers for all of these immediately. Concessions for the three onshore areas, plus offshore “Block 2” to the west of Corfu, were signed in 2017, and ratified by parliament in 2018. Another four maritime concessions were also signed in 2018: giant deep water areas West and South West of Crete, plus “Block 10” off the Peleponese peninsula, and the “Ionian” offshore block which includes the west coasts of Corfu and Lefkas islands. As we publish this article, these agreements are awaiting final approval from parliament.

Altogether, the deals cover over 60,000 square kilometres offshore, and 17,000 square kilometres on land. The offshore areas stretch over most of the Ionian Sea to the west of Greece, touching islands such as Corfu, Kefalonia and Zakynthos, down into the deep water Libyan sea to the west and south of Crete. The onshore areas in northern and western Greece include national parks and supposedly protected “Natura 2000” areas. (See the reports here and here from WWF for much more detail.)

There is no apparent difference here between any of the Greek political parties: all favour the oil industry. The Neo Democratia-PASOK centrist coalition government started the process of sell-offs in 2014, and it was continued in 2017 and 2018 by the left-wing Syriza government. In July 2019, Neo Democratia came back to power with a rampantly pro-business programme focused on prioritising foreign investment. In September it brought bills before parliament to ratify the concession agreements signed by the previous government. 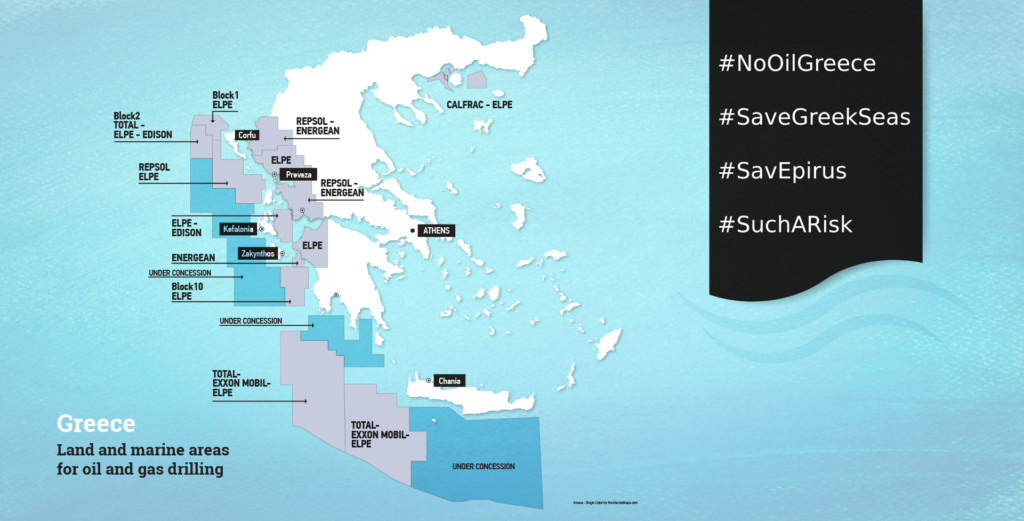 The rhetoric is that the oil and gas drilling will create a new Greek industry to bring jobs and wealth. With exploration still in the early stages, there are no serious estimates yet of the supposed benefits. Once the fields are productive, companies will pay a set fee plus a “royalty” or percentage of sales. On the other hand, as an economic study commissioned by the World Widelife Fund shows, even one major oil spill in the 25 year life of the deals could hit the tourist and other industries with multi-billion Euro losses, on top of the massive costs of clean-up operations.

The oil companies will be hoping for handsome profits. Here are the corporations currently involved: 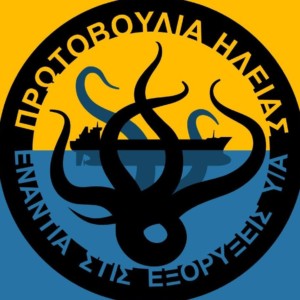 Exploration works started in the first concession areas in 2015. But none of the companies has actually produced any oil or gas yet. And now people are mobilising across western Greece to try and stop it happening. People from the Save Greek Seas campaign told us:

“The anti-drilling movement started in Epirus, where oil exploration has already begun. A small group of people suddenly realised that their land, their water – and therefore their life – was being passed into the hands of oil corporations. In a short time, the people of Epirus managed to get informed, spread the news, and organise protests – including a large protest march held in the city of Ioannina this year in May 2019. They have been drawing international attention to this crime happening in the mountains of Epirus, amongst the sources of the ancient rivers of Greece.

“Around a year ago, this was followed by the creation of the People’s Assembly of Kefalonia-Ithaca (two of the Ionian islands further South). In a year, this assembly has managed to raise awareness amongst people there, breaking the silence and the lies of mass media and the local authorities. Their influence made the former local council sign the petition against oil and gas drilling in Greece.

“Now, in a very short time in 2018 and 2019, more than 15 new People’s Assemblies against Oil and Gas Drilling have been created, mostly in the targeted areas. Their primary objectives are to spread awareness of the consequences of this plan, and demand the annulment of the concession agreements with the oil companies.”

On 28 September in Athens, the assemblies from across Greece will meet up in a Pan-Hellenic open conference against oil and gas drilling.

“The assemblies are fully independent, but they share a common goal. The idea is that we will draw a common path together in the gathering in Athens.”

The World Wildlife Fund has also launched its own campaign against Greece’s oil and gas plans. In May 2019, 100 scientists and scientific bodies and organisations from Greece and all over the world signed a “resolution against hydrocarbon exploration in the Hellenic Trench”. 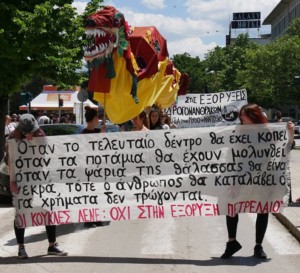 The Greek government and corporations have not always had their way when it comes to pushing through schemes of mass environmental destruction. Famously, a powerful local resistance struggle confronted the state and international capital and managed to shut down work on the Skouries gold mine in Chalkidiki. After more than a decade of opposition, Canadian mining corporation Eldorado ceased all work in 2017.

Unfortunately, Skouries is another project the newly confident Greek government is now promising to revive. For the government and its corporate partners, the time has come to roll over resistance movements and show the global markets that Greece is truly “open for business”. For those of us who support life against profit, the fight is on.

In the words of people involved with the campaign:

“The fight against the oil giants will definitely be a hard one. But, where there is strong resistance from local communities, sometimes the beast can actually be beaten.”

Thanks to Save Greek Seas, and to the Citizens’ Initiative of Athens against Oil and Gas Drilling, for help with this article and with our report on Energean. 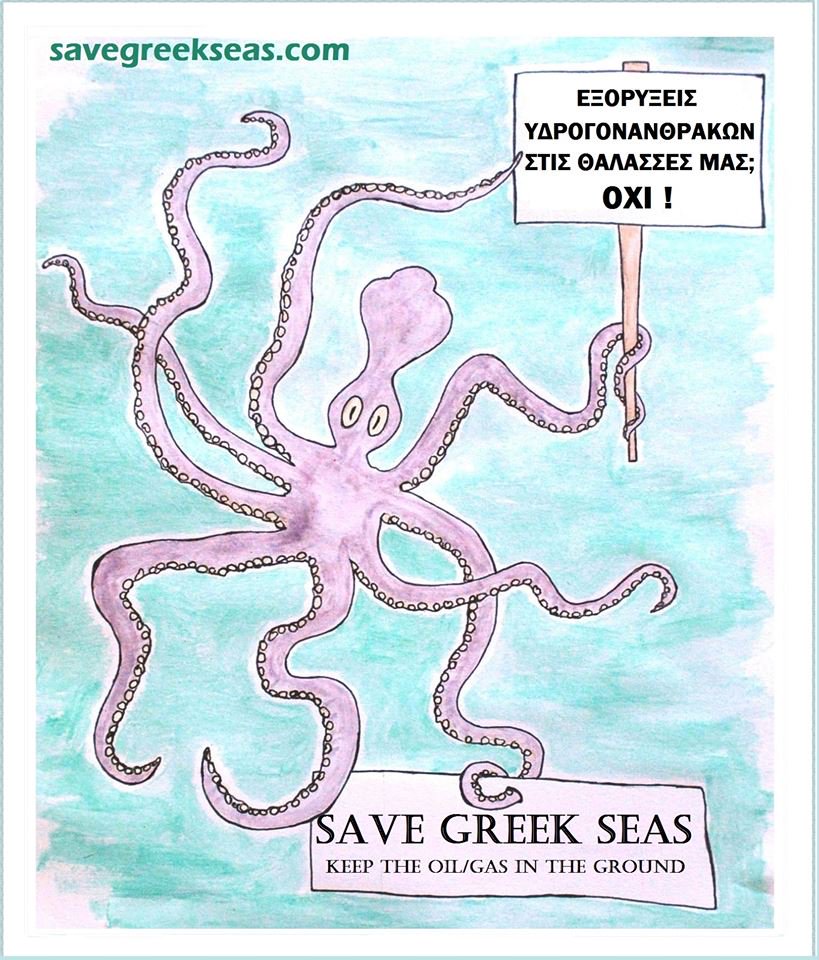 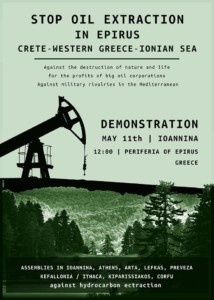 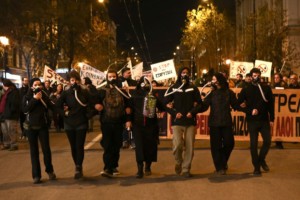 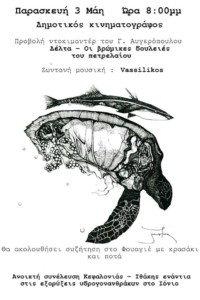