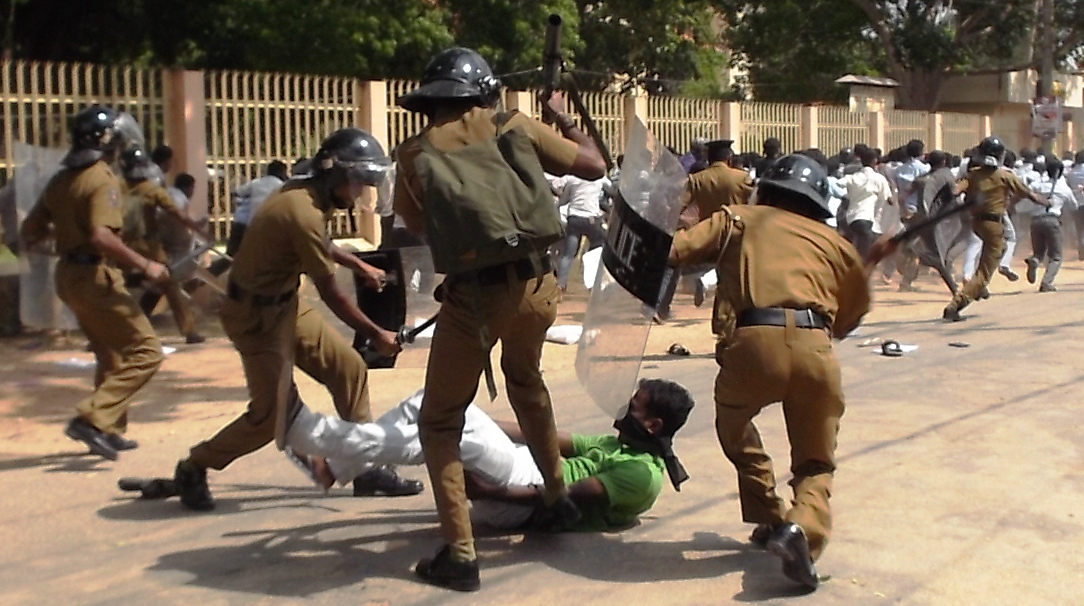 The Scottish Police College is overseeing police recruitment in Sri Lanka, a country that the UN human rights chief warns “is heading in an increasingly authoritarian direction”, an investigation by Corporate Watch, published in the Sunday Herald, has found. UK aid money also paid for Sri Lanka’s top cop to train in Scotland before final war against Tamil Tigers.

The Scottish Police College (SPC) is deeply involved in creating Sri Lanka’s new National Police Academy. All Sri Lankan police recruits will follow a “contemporary and dynamic curriculum” being designed with the SPC. In addition, “training for thousands of existing partly trained officers will be prioritised based on the newly developed curriculum”. Scottish officers will coach Sri Lankan police trainers, “to ensure they are capable of delivering each of the re-designed programmes”.

The scheme started in November 2012, but its full extent has only just come to light through a Freedom of Information request to the Association of Chief Police Officers (ACPO), who handed over the project’s blueprint to Corporate Watch. The project is funded by Britain’s Conflict Prevention Pool, a ‘peace fund’ administered by three Whitehall bodies including the Department for International Development (DFID).

This revelation comes a week after the UN’s most senior human rights official, Navi Pillay, finished her inspection of Sri Lanka. Last weekend, Pillay said she was “deeply concerned” that Sri Lanka “is showing signs of heading in an increasingly authoritarian direction”, warning that “democracy has been undermined”. Pillay slammed the police for their “harassment and intimidation of a number of human rights defenders”, including priests and journalists, who were scheduled to meet the UN official. Human Rights Watch accuse Sri Lanka’s police of widespread rape in custody.

The Foreign and Commonwealth Office (FCO) has defended the project and denied it was developing a police state. An FCO spokesperson told Corporate Watch that “British Government-supported justice and security projects have safeguards in place that seek to ensure our work does not contribute to human rights abuses. On the contrary, our police training reform project in Sri Lanka, led by the Scottish Police College (SPC), aims to embed international standards in police training”. The SPC said its advice to the Sri Lankan police includes human rights and “public relations” training.

British diplomats had anticipated the police training project may cause “some reputational or political risk”, but told the SPC that any criticism could “be mitigated effectively” by ensuring their “public communications on the project underline the positive human rights impacts of our assistance”, the ACPO document shows. Inauspiciously, when Scottish police experts arrived in Sri Lanka for their “initial scoping work” in November last year, riot police carried out a crack down on Tamil student protestors at Jaffna University.

Bruce Milne, that delegation’s lead staff member, has already faced criticism for his role in training the Maldives Police, after they allegedly orchestrated a coup ousting democratically-elected President Nasheed last year. Milne is an associate of the SPC and is available to them on a contractual basis. He runs a security consultancy firm, Learning and Solutions Ltd. Milne told Corporate Watch that neither his company nor his person has ever taken any payment directly from the Sri Lankan state. The British High Commission to Sri Lanka also covers the neighbouring Maldives.

Scottish officers have been training Sri Lankan police chiefs for over six years; before and after the government’s final counter-insurgency campaign against the Tamil Tiger rebels. At the end of this conflict in May 2009, 12,000 suspected Tamil Tiger fighters were interned without trial. Tamil deaths had reached tens of thousands – estimates range from 30,000 to 140,000.

Corporate Watch’s investigation found that, in the build up to this combined police-military offensive, 48 Sri Lankan police officers were trained by the SPC from May 2007 to January 2008. One of these officers, Jayantha Wickremaratne, was then promoted to lead Sri Lanka’s police from June 2008 – October 2009, commanding the force at the height of its human rights violations.

Wickremaratne, along with five other senior Sri Lankan officers, had attended an “intense six week bespoke training programme to create a community based policing strategy for Sri Lanka”, including a visit to Northern Ireland, which was coordinated by Dr. David Garbutt (ex-chief constable of Scotland) during June 2007. The SPC confirmed they trained Wickremaratne but told Corporate Watch it had “no record held”, and declined to comment on his subsequent role as Inspector General of Police in Sri Lanka.

After the war, the SPC developed community policing in Sri Lanka from August 2010 – March 2013, in a £400,000 scheme funded by Scottish aid money. The Scottish Government has subsequently stopped funding development projects in Sri Lanka.

The rest of the work was funded by Whitehall’s Global Conflict Prevention Pool, with over £200,000 committed until March 2014. Despite Britain’s long-involvement training and advising senior Sri Lankan police officers, an FCO spokesperson said, “Reform projects such as this one take time. We believe that our continued support will have a positive impact, in the interests of all of Sri Lanka’s communities”.

A spokesman for Police Scotland said: “The Scottish Police College has an international reputation for the quality and integrity of its training packages which are delivered to serving officers both in Scotland and from the wider law enforcement community across the world. If a course is being designed for a country outwith the United Kingdom then discussions will take place with the appropriate organisations to ensure that all relevant information is gathered and considerations taken. When the British Government supports justice and security projects there are safeguards put in place to ensure that any work does not contribute to human rights abuses and it has been clear from the outset that the training reform package in Sri Lanka, led by the SPC, aims to embed international standards in police training. There has also been widespread support for the project from opposition parties, UN and international humanitarian agency representatives and non governmental organisations.”