With thanks to Earth Thrive and the Protect Jadar and Rađevina association for their support with this piece.

In the Jadar river valley of western Serbia, communities are taking on metals and mining giant Rio Tinto to stop the construction of a lithium mine that threatens land and livelihoods across the region. Rio Tinto is a British-Australian corporation with joint headquarters in London, UK, and Melbourne, Australia. This article introduces the Jadar Project, the purposes and impacts of lithium mining, and Rio Tinto’s long legacy of destruction around the world.

What is the Jadar Project?

In the early 2000s, Rio Tinto discovered a mineral in Serbia’s Jadar valley which came to be known as “Jadarite“. It is a lithium sodium borosilicate mineral, referred to as lithium and borate in this article. So far, this is the only place on earth where this particular mineral has been found. Rio Tinto tout it as one of the most significant lithium deposits in the world and have been exploring its potential for the last 15 years. The proposed mine in Serbia is expected to supply an estimated 10% of the growing global lithium demand.

The Jadar project is said to threaten more than 15,000 agricultural households in the town of Loznica and the Krupanj municipality, and the health and well-being of the communities of Loznica, Šabac and Valjevo. Households that sit directly on the proposed site of the mine face expropriation if they do not sell their land.

The project is currently at the feasibility stage (obtaining permits, buying land, completing technical documentation), yet Rio Tinto has already committed $2.4 billion to the development. Construction is then projected to take four years. Rio Tinto predicts the mine has 40 years of exploitation.

Yet locals aren’t letting it pass without a fight, taking their protests to Rio Tinto. Marija Alimpić, from the Protect Jadar and Rađevina association, says:

“Resistance among the locals is growing, their anger is growing. We’re prepared to stop the construction of the mine, and we’re convinced that there will be no mine. It remains to be seen how long it will take for them to realise this.” 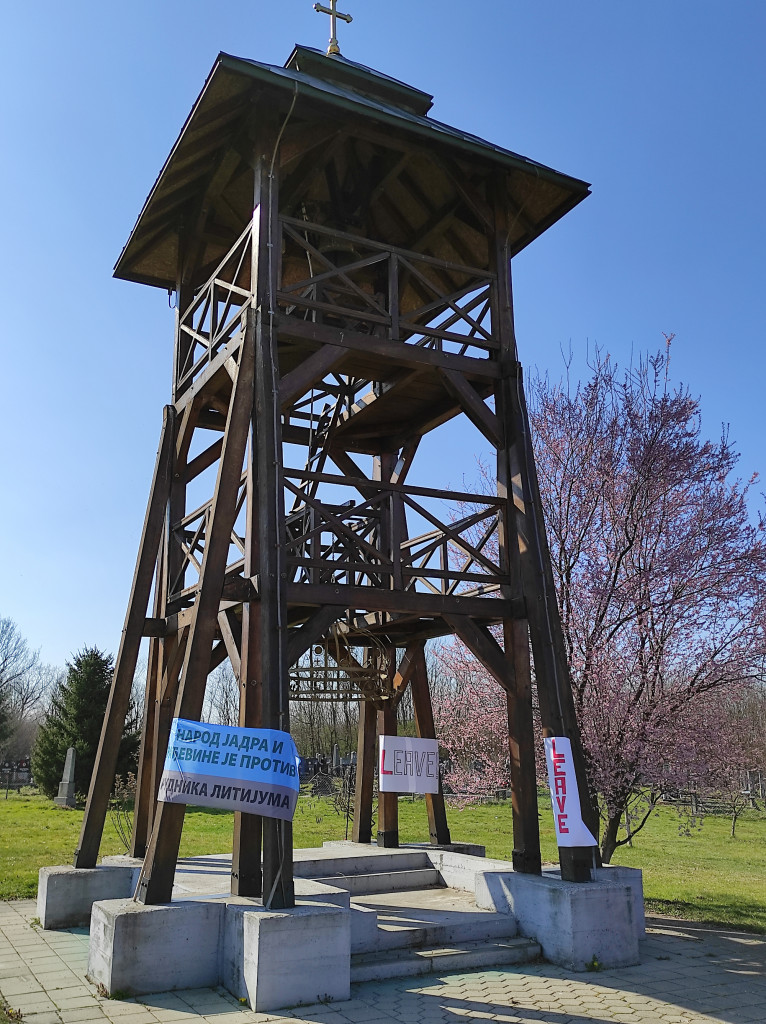 Demand for one lithium-reliant product however dwarfs that of all others: the electric car. With many people looking to reduce their impact on the environment, or not wanting to shell out for petrol, the electric vehicle (EV) industry is experiencing a boom, especially in Europe. Growth in EV subsidies and regulations on conventional vehicles have also boosted the market. Sales of electric vehicles increased by 43% in 2020, despite a drop in car sales overall. In Europe, the largest consumer has been Germany and the main beneficiaries have been Renault, Tesla and VW.

Rio Tinto describes the Jadar deposit as being located “at the doorstep of the European automobile industry”; by 2030, the European Commission wants to place at least 30 million electric cars on Europe’s roads. In line with the European Union’s green transport agenda promoting electric vehicles, the Jadar region of Serbia, like others in Europe and the Americas, has effectively been marked a ‘sacrifice zone’ for the ‘green’ energy industry.

How ‘green’ are lithium batteries?


The impacts of lithium mining is a major study in and of itself. Here we list just the tip of the iceberg of the industry’s impacts across the planet.

Lithium extraction requires huge amounts of water, approximately 500,000 gallons per tonne of the mineral. More than half of the world’s lithium resources lie beneath the salt flats in the Andean regions of Argentina, Bolivia and Chile, one of the driest regions on Earth. In Chile’s Salar de Atacama, lithium and other mining activities consumed 65 percent of the region’s water, causing groundwater depletion, soil contamination and other forms of environmental degradation, forcing local communities to abandon ancestral settlements.

Communities resisting the mine in Serbia fear for the mine’s tailings. These are the toxic residues of chemicals, rock and water left over from the mining processes. How tailings are dealt with accounts for many of the major pollution impacts of mining (learn more in London Mining Network’s explainer). The only tailings site publicly announced so far is in Radjevina, which would involve the destruction of 170 hectares of forest. The land is home to many protected species and nearby villages depend on its underground waters.

In 2014, one hundred thousand cubic metres of tailings from an antimony mine were released into the Kostajnik River (a Jadar tributary) after a record rainfall triggered floods and landslides. The Serbian Environmental Protection Agency (SEPA) found elevated levels of arsenic, lead, copper and zinc in local waterways. The government also reported that 360 hectares of soil were affected by heavy metal contamination. The Jadar valley is a floodplain, and after many decades of experience with pollution from mining in their communities, locals fear the new project would spell disaster.

Chemical leakages from tailings sites can be fatal. In May 2016, masses of dead fish were found in the waters of Tibet’s Liqi River, contaminated by a toxic chemical leak from the Ganzizhou Rongda lithium mine run by Chinese company BYD. Cow and yak carcasses were also found floating downstream after having drunk contaminated water. The Free Tibet campaign produced a report on BYD and the effects of lithium extraction in Tibet.

A number of toxic heavy metals are also needed as components of lithium batteries for electric cars and other consumer goods. One of these metals is cobalt. An investigation into child labour in Democratic Republic of Congo’s cobalt industry revealed that tens of thousands of children were employed in the mines – two years after the publication of a damning Amnesty Internetional report about human rights abuses in the cobalt trade. There are many health risks associated with cobalt mining, including serious lung disease.

In Serbia, locals can already see the damage caused by Rio Tinto’s exploratory activities. The Protect Jadar and Rađevina association says the area is riddled with saline aquifiers, some of which will need to be drained to access the mineral. They claim that the many exploratory drill holes made by Rio Tinto have disturbed the underground waters. Grass and vegetation is no longer growing around the holes, and locals fear contamination of their drinking water. A well in the village of Gornje Nedeljice is reportedly no longer safe to drink from.

Rio Tinto’s Jadar mine also threatens the important cultural heritage of the area. According to Marija Alimpić, more than 50 prehistoric archeological sites lie in the Jadar Valley, including a 3500 year-old necropolis which reportedly stands in the path of a second tailings waste area. 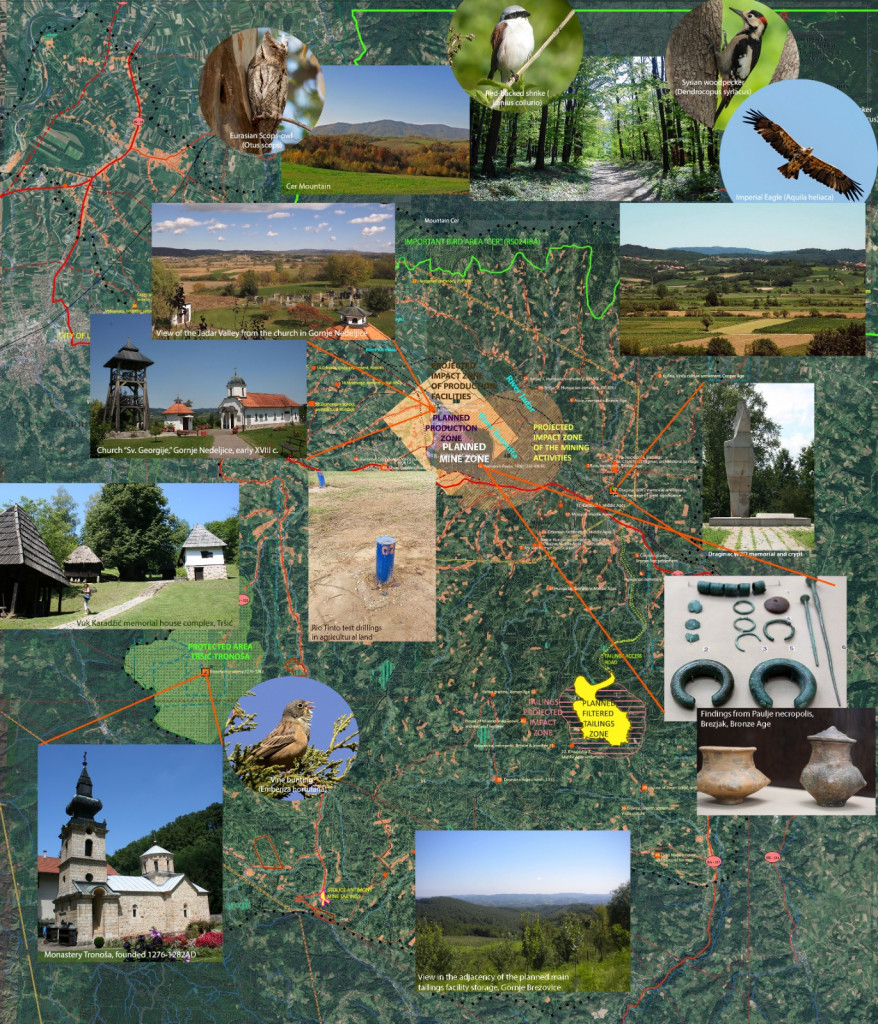 Serbia’s government is claiming that the mine will bring an ‘economic revival to the entire country’. But campaigners ask if Rio Tinto can be trusted, given that the company has a very long legacy of social and environmental harm across the world. London Mining Network has produced a detailed overview of the company’s impacts around the world including:

The First Nation Innu communities of Uashat mak Mani-Utenam and Matimekush-Lac John in Canada are in the throes of a $900 million lawsuit over Rio Tinto’s mining impacts. They said:

“While Rio Tinto is anxious to uphold its image as a model corporate citizen…the Uashaunnuat and MLJ can attest that, in their own experience, these are nothing but empty words. [The company] has undertaken all of its projects without the consent of the Uashaunnuat and MLJ, in violation of our rights”.

Despite its corporate spin, Rio Tinto’s mining activities leave a trail of pollution, exploitation and repression behind them.

Blood on their hands – who is financing the mine?

The UK’s Rio Tinto plc holds a 100% interest in the Jadar Project. Rio Tinto is one of the biggest mining companies in the world. It is a ‘public’ company, meaning its shares can be bought and sold on the London Stock Exchange. As a result it has a huge number of shareholders, none of whom owns close to a majority of the company’s shares. The biggest single investor, holding 14% of Rio Tinto shares, is Chinalco, a huge aluminium producing company owned by the Chinese state. Market databases show the next biggest shareholders are the giant investment funds Blackrock, Vanguard and Capital, with 11%, 8% and 7% respectively.

Rio Tinto is run by Chief Executive Jakob Stausholm, previously the Chief Financial Officer. He leads the Executive Committee of the company, comprising the managers that head up different Rio Tinto businesses. Click here to find out who they are.

Stausholm also sits on the board of directors, which is chaired by Simon Thompson. The board is not involved in the day-to-day running of the company but features various corporate bigwigs intended to reassure shareholders the company is in ‘good’ hands. Click here to find out who else sits on the board and the other corporate appointments they enjoy.

A global shift towards hybrid and electric cars is dependent on lithium batteries and has resulted in a ‘lithium rush’, with several companies, supported by governments, scrambling to exploit lithium deposits around the world. This is ‘green capitalism‘ at its finest. Thriving on the crises of climate change and pressures to phase out fossil fuels, whole new markets are created where corporations can continue to wreck the earth to create ‘ethical’ consumer goods whose exploitative and polluting impacts are hidden thanks to the global nature of the economy.

At a protest as part of indigenous resistance to lithium mining in Argentina, one hand-painted sign said “We don’t eat batteries. They take the water, life is gone.”


The Protect Jadar and Rađevina association can be found on Facebook here and here.

Bankwatch’s report on the Jadar mine

On the frontlines of lithium extraction, by Yes to Life, No to Mining – including case studies of communities impacted by the lithium mining boom.