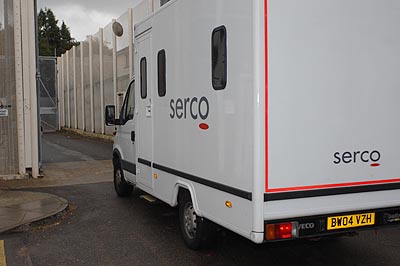 Two people have died from suspected heart attacks and a third killed himself in UK immigration prisons in the last month. Meanwhile, a leaked memo by Serco, which runs one the prisons, reveals that the outsourcing and security giant had dismissed similar incidents in Australia, where it runs all immigration detention facilities, accusing detainees of “creating a self-harm culture” and using it as a “bargaining tool.”

Early in the morning of 2nd July, a 47-year-old Pakistani national locked up in Colnbrook immigration prison, near Heathrow airport, collapsed in his cell with “very bad chest pain.” According to his cellmate, Muhammad Shukat had been groaning in agony for hours but his repeated pleas for help were not taken seriously by the detention centre staff, who did not call the ambulance until it was too late (see here). A postmortem found the “provisional cause” of the death to be coronary heart disease. The Home Office would not give any more details.

Less than a month later, on 31st July, another man, aged 35, was found dead in his cell, also in Colnbrook. Again, the Home Office would not reveal any details, not even his name and nationality, though unconfirmed reports by detainees said he was American. A postmortem found the cause of death to be “a ruptured aorta” and the death was treated as “unexplained.” Aortic ruptures can be caused by a number of things, including trauma, where the aorta (the largest artery in the body, which branches directly from the heart and supplies blood to the rest of the body) is ruptured as a result of severe distress.

Two days later, on 2nd August, a 35-year-old man locked up in Campsfield House immigration prison, in Oxfordshire, was found dead in the toilets. Conflicting reports suggest he either hanged himself or cut himself with a razor blade. According to fellow detainees, the unnamed Moldovian migrant was hours away from being deported and had been moved to the short-term holding facility within the centre, causing him to become “very anxious.”

As usual, the UK Border Agency (UKBA) declined to comment on the specific circumstances of each case. It simply said: “the police and the Prisons and Probation Ombudsman always investigated deaths in immigration detention centres and it would be inappropriate to comment until these were complete.” Similarly, Serco said: “While these enquiries are under way, it would not be appropriate for Serco to comment on specific cases.”

However, campaigners say experience shows that these investigations are “unlikely to go anywhere” and that the whole detention system, which “drives people to such desperate measures,” should be reviewed.

A spokesperson from the Campaign to Close Campsfield, which held a vigil in Oxford following the death in Campsfield, said: “This is yet another shocking event in the history of Campsfield House, where innocent people are locked without time limit and in daily fear of removal to the nightmare conditions that drove them to leave their home country in the first place. Just being locked up in these conditions is enough to seriously affect a person’s mental health.”

Emma Ginn from Medical Justice said her organisation has documented, based on medical evidence from many hundreds of detainees, the “disturbingly inadequate healthcare” provided to “often vulnerable immigration detainees” in Colnbrook and other immigration detention centres. “This, combined with the perilous and frightening conditions of detention, is a lethal cocktail, a disaster waiting to happen,” she added.

A No Borders activist who took part in a solidarity demonstration at Colnbrook on 5th August, said: “These crimes should stop, and the only way to do that is to close down all immigration prisons and stop forcibly deporting people who have come here to seek refuge and safety.”

In an article dated 4th August, Harmit Athwal of the Institute of Race Relations wrote: “Very little is known about the three men who have died in recent weeks and very little will probably be revealed about them and the circumstances of their deaths until their inquests, which are unlikely to be held for some years. We must find ways of holding the Home Office and its contractors to account, and we must ensure that such deaths are not forgotten by the passage of time.”

Opened in 2004, Colnbrook was designed and built by Serco, which operates the prison on an eight-year contract with the UKBA, with the possibility of a two-year extension. Serco also runs Yarl’s Wood immigration prison, in Bedfordshire, and provides some detainee escort services along with Reliance (which took over from G4S earlier this year).

In 2009, Serco took over the management of Australia’s seven immigration detention centres and has since been the subject of a number of controversies. The British outsourcing giant also runs the London bike hire scheme, the Docklands Light Railway, waste management services, health centres, welfare programmes and many other lucrative ‘public’ services.

In a statement to detainees about the first Colnbrook death, the prison’s deputy director Jenni Halliday described her “deep regret” and extended her condolences. In another statement about the second death, Serco’s contract manager Michael Guy told detainees that the death was “thought to be from natural causes,” in what appeared to be an attempt to reassure them and prevent possible repercussions.

However, according to a Serco memo dated 31 May 2011 and obtained by The Australian newspaper, the security firm had told its guards at the infamous Christmas Island detention centre in north-west Australia that “clients [detainees] are creating a self-harm culture” and “using self-harm as their bargaining tool.”

The revelation came as the Australian prison ombudsman announced a decision to launch an investigation into suicide and self-harm in the country’s immigration detention facilities. More than 1,100 incidents of threatened or actual self-harm in detention were reported in 2010-11.

The three deaths bring the number of people who have died in UK immigration prisons since 1989 to 17 (see this IRR report). Hundreds of migrants have also self-harmed in detention during this period. Last year alone there were 183 self-harm incidents requiring medical treatment, with Colnbrook registering the highest number of incidents (58) among all UK immigration prisons (see here).

Many of these detainees are victims of torture and abuse or suffer mental problems but are, nonetheless, locked up in prison-like conditions for lengthy periods of time. Their medical condition and evidence are overlooked by Home Office case workers, in breach of the UKBA’s own Detention Centre Rules (see here and here, for example).

Yet the UKBA’s director of criminality and detention, David Wood, still likes to claim that “the health of all detainees is monitored closely, and the healthcare professionals are required to report cases where it is considered that a person’s health is being affected by continued detention.” Asked by Corporate Watch to comment on the recent deaths in Colnbrook, Serco press officers sent a similar, standard statement, claiming that “the health and wellbeing of the residents in our care is always Serco’s top priority at Colnbrook Immigration Removal Centre.” The statement also claims that “a formal Medical Response procedure is in place to deal with emergencies at any time.” But whether these procedures are actually followed or just a paper exercise is perhaps something for HM Chief Inspector of Prisons and the Care Quality Commission to look into.

Only last week the High Court ruled that a man with severe mental illness, who had been detained for five months, was subjected to “inhuman or degrading treatment” by the immigration authorities, in breach of Article 3 of the European Convention on Human Rights. The 34-year-old Indian national, referred to in the ruling as ‘S’, was detained in Harmondsworth, near Heathrow, between April and September last year, despite having a history of serious ill treatment and abuse before arriving in the UK. His lawyer is quoted saying: “The court’s decision … sends a very loud and clear message to the authorities. We would urge the [immigration] minister to conduct a fundamental review into how people suffering from mental illness are treated in the immigration detention estate.”