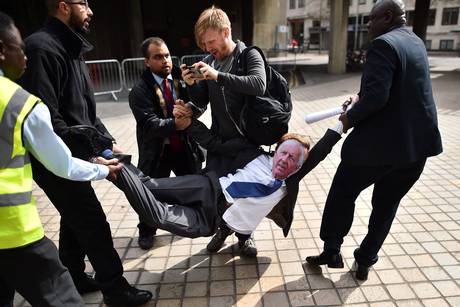 On Thursday 23 April 2015, several protests were held outside the gates of the Barclays Annual General Meeting at the Royal Festival Hall. Several activists bought shares and attended the AGM in order to ask questions.

Anti-militarist activists held a protest calling on Barclays to divest from the arms trade.

One activist read out an alternative chairman’s speech to the queue of shareholders waiting to pass through security. He was roughly carried away from the entrance by Festival Hall security guards.

A press release from the Stop Barclays Coalition states: “Barclays is the named shareholder in several major arms firms including Raytheon, Boeing, and Lockheed Martin:

* Raytheon is the world’s fifth largest arms company. Raytheon’s products include Bunker Buster bombs, Tomahawk and Patriot missiles. A number of their missiles can be loaded with cluster bombs, which are banned under international law but have, nonetheless, been used by the US and Israeli armies.

Following mass action in 2014, Barclays sold their shares in Elbit systems, an Israeli arms company which supplies most of the armed drones used in Gaza. However, they continue to hold shares in other major arms firms which supply Israel.

“I welcome the fact that Barclays is no longer a named shareholder in Elbit systems. I am asking you to confirm that you have divested yourselves from this company that manufactures drones used by Israel in its wars and will no longer commit to allowing your clients to buy and sell shares on your platform.

Having taken this important first step, I now ask whether Barclays will commit to exclude all arms companies from its stockbroking platform and refuse to deal in arms trade shares for hedging purposes. Otherwise, it is difficult to accept Barclays’ statements that it is not an investor in the arms trade.”

A spokesperson for the activists said: “Barclays has a policy commitment to remedy human rights violations it is linked to, yet the bank holds shares in companies that have armed some of the most oppressive governments in the world.”

Mahmoud Nawajaa, the general coordinator of the Palestinian Boycott, Divestment and Sanctions National Committee (BNC), commented in a statement: “The fact that Barclays is no longer listed as a shareholder in Elbit Systems is a welcome development. We hope that Barclays will now commit to not allowing clients to buy or sell Elbit shares on its platform. Further than that, we are calling on Barclays to sell its shares in all other arms companies that are complicit in Israel’s human rights abuses.”

Anti-fracking activists brought a giant puppet replica of a frack well to the AGM, calling on Barclays to cancel Third Energy’s plans to frack for shale gas in North Yorkshire. Barclays owns 97% of Third Energy which is planning to frack for shale gas in the Ryedale village of Kirby Misperton, despite local opposition. In recent evidence to the Environment Food and Rural Affairs Select Committee, Third Energy’s John Dewar described plans to expand fracking in Ryedale to 19 sites.

Ryedale resident, Monica Gripaios, went to the AGM in order to challenge the board. She said: “As a Barclays shareholder, I’m shocked that they are sponsoring fracking in our community. Their plans to frack in North Yorkshire will have unacceptable levels of risk for the local environment and for the global climate.”

A third protest was held by campaign group, ‘The People vs PFI’, to highlight the “role of the Private Finance Initiative (PFI) in the offshoring of profits, and closure or privatisation of public services”. According to a press release by the group, “Barclays are the leading UK high street bank for equity investment in PFI projects, with investments in approximately 60 UK PFI projects including schools, NHS hospitals and other assets including the unused Dorset police station.”

People vs PFI campaigner Joel Benjamin said: “The true cost of PFI, and its real impact on staff, services, and local citizens are hidden beneath the cloak of commercial secrecy… AGMs provide a rare opportunity to hold powerful interests like Barclays to account for their role in tax avoidance and the closure or privatisation of public services, via PFI.”