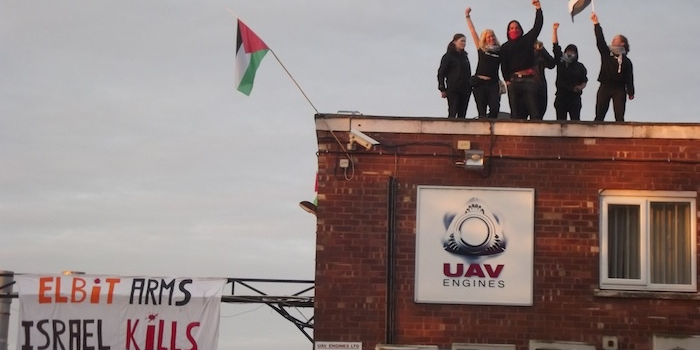 During July and August 2014, 2,150 Palestinians were killed as Israel carried out another massacre of Palestinians in the besieged Gaza strip. Entire neightourhoods were destroyed and mosques, market places, UN relief compounds and schools were deliberately targeted. There was no safe place for the 1.7 million people in Gaza to take shelter from the Israeli bombardment. Israeli unpiloted planes, known as drones, carried out over 800 major strikes. Elbit Systems, Israel’s largest military company, supplied many of the drones used by the Israeli military.

Through its subsidiary UAV Engines, Elbit Systems operates a factory in Staffordshire. The company regularly exports military equipment to Israel. Elbit is also a part of the U-TACS partnership manufacturing the Watchkeeper drone for the Ministry of Defense.

Nine campaigners occupied the rooftop of the factory in August. The occupation closed the factory for two days, costing Elbit tens of thousands of pounds, preventing a shipment of components from being exported to the US and shining a spotlight on the flourishing military cooperation between the UK and Israel.

During the attack on Gaza, Palestinian organisations called for a two-way military embargo on Israel. The call demands an end on all military exports to Israel and of purchases of military equipment from Israeli companies.

Israeli companies were the largest exporters of drones globally in 2013. Israeli drone technology has been sold to over 50 countries worldwide. Israeli war crimes against Palestinians are used as a marketing strategy for Israeli drones which are sold as ‘battle tested’, which means they have been tested on the bodies of Palestinians in Gaza.

We are calling for people from across the UK to join a demonstration at Elbit’s UAV Engines factory to demand a military embargo on sales to Israel and from Israeli companies and to demand the closure of the factory.

The demonstration is being held to coincide with the Boycott Israel Network’s gathering in Coalbrookdale, a short distance from Lichfield. We are calling for local groups to arrange transport.

How to get to the demo: The demo is at the UAV Engines factory, Lynn Lane, Shenstone, Lichfield, WS14 0DT

Bristol Against the Arms Trade