South West Water charges the people of Devon and Cornwall some of the highest bills in the country. The company says this is necessary to improve the service. But an investigation by Corporate Watch has found it is paying out more to owners and financiers than it is investing in the water and sewerage supplies that residents depend on.

We put all the points below to South West Water. They refused to give a formal response but did not dispute any of the facts or figures.

Click here for all the figures and calculations used in this report.

South West Water boasts it “spends in excess of £100m every year” to maintain the water and sewerage services they provide to their “customers”. That sounds like a lot – and the residents of Devon and Cornwall that it serves would expect it to be so, given they pay some of the highest water bills in the country.

But is it enough? The company’s recent history suggests not.

The company has been put on special measures by the Environment Agency after it reported more “pollution incidents” than any of the other water and sewerage companies, with 115 spills per 10,000km of sewer, compared to an average of just 34. 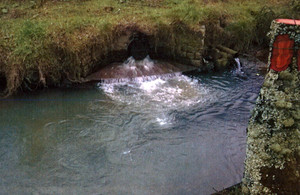 The outfall at Calenick Sewage Station, where South West Water was fined in 2015 for discharging untreated sewage into the river (Environment Agency, gov.uk)

A report produced by the agency said that the “spills caused pollution to rivers, fish kills, damage to ecosystems and pollution on beaches”. South West Water’s performance in dealing with pollution from sewage has been rated as “significantly below target” every year since 2011 – a worse record than any of its peers.

Meanwhile, South West Water pipes continue to suffer persistently high levels of leakage. Even though it is meeting the targets set by the regulator, 82m litres of water a day continue to leak from the company’s pipes.

Flooding remains a problem for some residents. There were 165 incidents of internal sewage flooding reported to South West Water last year, with 56 incidents in the Par area alone. Resident Lorna Richie told BBC Radio Cornwall that at times sewage water had been flowing like a river past her house, threatening to flood her home with human excrement and sanitary items. Worryingly, an Early Day Motion filed in parliament suggests the company has “sought to prevent” some residents in the area from raising concerns about its handling of the flooding after it paid a settlement in return for a non-disclosure agreement.

A lack of attention to staff safety has also had tragic consequences. In April this year a judge fined South West Water £1.8m after employee Robert Geach drowned in a sand filtration tank at a water treatment plant in Falmouth in December 2013. In sentencing, the judge said it was “an accident waiting to happen” as the company, which had pled guilty to failing to ensure the health and safety of employees, had not done the correct risk assessment. He said “the dangers of falling into tanks was pointed out to South West Water on a number of occasions, and the fact that something needed to be done.”

Thanks to the sky-high prices that Devon and Cornwall residents are paying, the company should have enough money to improve such problems. The South West Water Ltd accounts for 2017 show it made a £150m profit last year, after receiving £563m from its “customers” bills. That’s a pretty decent profit ‘margin’ of 27%. And this was not an unusually good year. Accounts filed at Companies House show that South West Water has made an average profit margin of 26% over the last ten years, with total profits after tax of £1.3bn.*

So South West Water is making serious cash from running the water and sewerage supply. But look at the accounts and it turns out a huge amount of money that could have been spent on plugging leaks and stopping sewage spills has instead been paid out to shareholders and other corporate investors.

In its most recent financial accounts, the company boasts “a key highlight” over the last year was the “significant capital investment” – £183m in cash – it had made as part of “a concerted push to enhance our environmental performance and services to customers.” This helps build and improve “hundreds of treatment works, reservoirs and pumping stations” and “pipes that could “stretch all the way to Australia and back”.

That £183m sounds impressive. But delve deeper into the accounts and it turns out this is less than the company paid out to its owner over the same period. South West Water sent a whopping £213m to the Pennon Group – its Exeter-based corporate owner. Even in the UK’s infamously profitable privatised water industry this stands out. Over the same period all but one of the other water and sewerage companies spent more money investing in the service than enriching shareholders.**

Last year was a particularly profitable one for investors but it was hardly an anomaly. Accounts show that over the last ten years, the company paid its owner dividends, or cash payouts, of £1.2bn. In addition, South West Water paid out £546m in interest to the banks and financiers it borrowed from over that period.

Meanwhile, it spent £1.4bn investing in infrastructure to improve the service: £300m less than the £1.7bn it paid out to investors.

Of course, the company has to borrow money to make the upfront investment in treatment plants, pipes and the like and the interest it is paying out is a necessary consequence of that (though even this would be cheaper if the service was not privatised). However there is no obligation to pay out such huge sums in dividends.

The company has been accelerating down this path in recent years. Even though it has been posting higher profits,** it has actually spent less on improving the infrastructure and equipment needed to get water to people’s taps and treat their sewage in the last five years: £694m compared to £718m in 2008 to 2012.

Far from fixing the roof while the sun shines South West Water is not using this money to pay off its debts either. The accounts show South West Water has actually borrowed more over the last five years. In 2013 the company’s borrowings from banks and other lenders increased by £402m, to £2.3bn.

Look at the people behind South West Water and these priorities become easier to understand.

South West Water is owned by the Pennon Group Plc. Calling itself an “environmental infrastructure group”, Pennon is essentially a holding company that owns the rubbish business Viridor and Bournemouth Water, as well as South West Water. Pennon shares are bought and sold on the stock market and, as is common with such large corporations, Pennon itself is owned by an array of banks, investment funds and insurance companies from across the world.

Records show its biggest shareholder, with 10% of Pennon shares, is Lazard Asset Management LLC, a US subsidiary of the Bermuda-registered investment banking firm Lazard Ltd. Other major shareholders include a Swiss private bank and French, Australian and US-based investment funds (click here for a fuller list). Pennon has paid out close to £1bn to shareholders in the last ten years, around the same amount it received in dividends from South West Water.

With no shareholder owning a majority of shares, the board of directors is likely the place where many of the most important decisions over the direction of the business are taken. 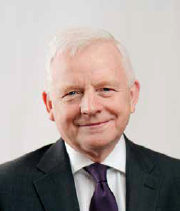 Heading up the management of South West Water and Pennon is CEO Chris Loughlin. He has run South West Water since 2006 and ascended to become the CEO of the whole Pennon Group last year. Among the previous jobs listed in his Pennon profile is executive director of British Nuclear Fuels Ltd. His achievements there included running the Sellafield nuclear plant and failing to prevent the scandal over the falsification of quality assurance documents for shipping fuel to Japan. He was forced out of the company in 2003 but left with a £1m compensation payment, which the Daily Mail said looked “set to prompt an outcry over fat cat pay-offs in the public sector”.

Fortunately for Loughlin that outcry hasn’t stopped him making yet more millions from his job in water. In 2017 he received a total pay package of £660,000 in 2017. This increased to £1.3m when his earnings as CEO of the Pennon Group were included.

How that pay is determined gives an interest into the company’s priorities. Over a third of Loughin’s South West Water pay packet was a bonus – £215,000 last year – and the vast majority of the targets for that are related to financial performance (including profit levels and how much it is paying out to shareholders) rather than the standard of service provided.

Loughlin’s work at South West Water and Pennon is overseen by Chairman Sir John Parker. Among an array of corporate gigs he previously held the same position at National Grid plc, another company profiteering from privatised services. Until recently he was also the Chairman of controversial mining giant Anglo American plc. Parker’s fellow non-executive directors include two bankers and an accountant for two of the UK’s biggest property developers and bookies William Hill – just who you would expect to run your water supply.

To expand their political contact book, the board also contains a well-connected ex-civil servant. And in a savvy move, South West Water has given a directorship to Liberal Democrat Lord Matthew Taylor, who until 2010 was MP for the local area of Truro and St Austell. Covering its bases, Pennon also has Tory connections, with Sarah Heald, its Director of Corporate Affairs and “life-long Conservative”, standing for the party in Manchester in this year’s general election.

Looking to the future

There is no ‘model’ water company in the current system: bumper profits for management and investors are the norm, while people struggle to pay their bills. Across the world people are ending the privatisation of their water supplies. Recent research has shown this is entirely possible in England too and that it could save households £100 a year. If any company justifies an end to privatisation it is South West Water. Could Devon and Cornwall show the rest of the country the way?

Click here for more on communities taking water back into public hands.
* Calculated by dividing the company’s total revenue over ten years by its total profit after tax.
** Most did enrich shareholders of course, just not to quite the same degree.
*** See the figures in the table here.