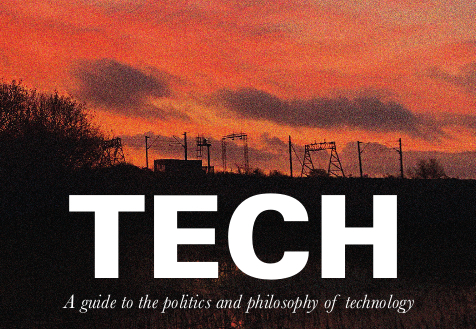 Plan C recently published a review of Corporate Watch’s new book Tech. Read it below and on the Plan C website. Get in touch if you’d like to review copies of our books for your project or website.

Tech: A guide to the politics and philosophy of technology by Corporate Watch
– book review by John de Plume

In ways that are not always immediately obvious, technology has come to be a defining feature of life today and indeed has begun to define the possible forms our future may or may not take. Corporate Watch’s Tech is an essential introduction to the topic, exploring a range of critiques and debates around technology, its dangers, and, nonetheless, its emancipatory potential.

2021’s proposed ‘Police, Crime, Sentencing and Courts Bill’ has been met across the county with mass mobilisations committed to ‘kill the bill’ and its draconian capacities. Anger towards the bill concerns its authoritarian character, which reveals the authoritarian tendency lurking inherent within Tory governmental ideology and neoliberal statecraft generally. But this authoritarian drift could never be realised through the police baton or the judge’s hammer alone; it is necessarily a high-tech issue too. Be it through the cameras everywhere in our streets or those that are worn on the jackets of the police, or through the data we willingly sign away to the algorithms and AI of Facebook, Google, et al, the so-called UK is already among the most technologically surveilled places on the planet. Today, a drift towards a real authoritarianism is made possible by and remains contingent on the development of technological apparatuses by big-tech corporations. These corporations, in turn, have themselves, famously, concentrated more wealth than has ever before been achieved in human history.

When today the forces of production are so well developed and the microelectronics revolution might offer so much in terms of automation of labour, how, we still ask, can it be that there exists a global crisis of wealth distribution with human need remaining so often unmet? As we are seeing so often, it is tech created in the interests of the market that has facilitated simultaneously the corporate concentration of hyper-wealth and, equally, the state toolkit necessary to defend that wealth from an ever-increasing mass of dispossessed surplus populations. As we move closer towards environmental catastrophe, moreover, the irrational impasse of this situation becomes evermore urgent. Addressing the issues around technology in view of real struggle today, then, is what makes the guidance and overview found in Corporate Watch’s Tech so useful.

The question of who it is that creates tech – in whose interests and for what purpose – is central throughout the analysis in Tech. Quite blatantly, technology does not exist in the world without application and, under the logic of the market, it is the pursuit of profit that governs its creation. However, ‘The dominant view presented in society’, as Corporate Watch note, ‘is that technology is apolitical and inevitable, that it represents human progress and makes our lives easier, more fulfilling, or just ‘better” (page 12). Tech represents an intervention into this dominant view, addressing the dynamics between technological production and its socio-political applications and consequence. Of particular concern is the environmental cost of tech production and its unsustainability; as is examining currently existing and future potential, alternative approaches to tech that might redeploy technological advancement in the direct interests of human need. Possibilities for open source and DIY design and utilisation of tech are explored, as are questions of how an environmentalist engagement with tech might supercede the individualist and anthropocentric world-views inherent to tech creation under the logic of the market.

Accordingly, the book collates varied analyses and critiques from such sources as Bookchin and Marx on the social dominance and application of tech; Donna Haraway’s Cyborg Manifesto and her feminist cybernetics; Deleuze and Guattari’s assemblage theory; postcapitalist formations of tech from communisation journal Endnotes, and speculative thinkers exploring the future imaginary of technology such as sc-fi writers Ursula le Guin or Philip K Dick. In laying out such ideas and discussions and in mapping the reality of the situation today, Corporate Watch address the immediate necessity for us to respond to these questions now and to take concrete action. They observe, ‘if the digital world is regarded as another terrain of struggle and effective strategies adopted, it could shift the balance of power towards those who seek liberatory change rather than those seeking to control and exploit’ (page 100). Deliberately avoiding obfuscating language and presentation, Corporate Watch’s publications are always clear and concise, working to illuminate the problematics of contemporary life in such a way as to make participation in the debate accessible and to provide resource for action and radical change.

Participation in struggle has never been more urgent. Today, from the ways in which we conduct our social lives online, to the ways in which we are surveilled and policed, from the methods by which high-tech capitalist extractivism ravages the environment and which automated capitalist exploitation diminishes our working conditions, technology has become fundamental to neoliberal hegemony, and to its emerging authoritarian drift. ‘We are’, as Corporate Watch observe, ‘at a unique moment in human history – an ecological precipice, perhaps a social tipping point’ (page 12). We ignore this and the expanding corporate, state and technological nexus at our peril.

Tech: A guide to the politics and philosophy of technology is available now from Corporate Watch. Corporate Watch is a not-for-profit co-operative providing critical information on the social and environmental impacts of corporations and capitalism. Alongside Tech, there is an extensive back catalogue of Corporate Watch’s previous publications available here.