What role does technology play in our ecologically sustainable future, and how do we get there?

As part of Not the Anarchist Bookfair in London, Corporate Watch along with Uneven Earth and Plan C London organised a discussion on technology, ecology and future worlds. The event, named Techno Fantasies and Eco Realities, was attended by about 20 people and included some wide ranging and at times lively discussion around the role of technology and ecology in future worlds. In particular it focused on how we can free our imaginations from the grip of capitalist realism (the idea that capitalism is the only option for organising society), picturing possible future worlds and the role that technology will play in them, while keeping our imagined worlds grounded in social and ecological realities. For example, not forgetting that we are living on a planet with limited natural resources or that we have to consider how to make these imagined futures real.

Participants were invited to read three short pieces ahead of the discussion:

Although initially a tongue in cheek provocation, Fully Automated Luxury Communism (FALC) has morphed into a serious proposition of how technology and automation could be used to provide for everyone’s needs and free people from the drudgery of wage labour. Bastani’s piece attempts to counter some of the ecological critiques of the idea, arguing that FALC can be green. Instead of trying to halt the progress of technological development, and reduce energy consumption, Aaron argues that we should ride the technological horse to move beyond scarcity, proposing a kind of accelerationism where technology is rapidly advanced in order to bring about radical social change.

In “Accelerationism.. and Degrowth? The Left’s Strange Bedfellows”, Aaron Vansintjan looks at accelerationist ideas like FALC and compares them to ‘degrowth’, evaluating the similarities and differences between the two frameworks. Degrowth is a movement that has emerged from environmentalism and alternative economics and is focused on theorising and creating non-growth based economies and societies.

Although accelerationism and degrowth are apparently opposed, Vansinjtan finds some shared ideas, including their recognition of the need for deep, systemic change, their calls for democratisation of technology and their rejection of ‘work’ (or at least the idea that work is inherently good). The key differences centre around accelerationism’s focus on reappropriating technology to achieve a resource-unlimited society, versus degrowth’s aim of limiting the development of certain forms of technology and staying within resource constraints. Degrowth also seeks to slow the metabolism of society, whereas accelerationism aims to increase the pace of social change. Ultimately, while supportive of accelerationism’s inspiring vision, Vansinjtan finds it seriously lacking in dealing with ecological critiques.

Rut Elliot Blomqvist examines three different visions of possible future worlds and the role that technology plays in them. ‘Pulling the Magic Lever’ is a reference to how technology is used to answer social or ecological problems without explaining how it will do so: you simply ‘pull the magic lever’ of technology and hey presto, it’s all solved. It’s a running theme in all three of the imagined futures Blomqvist chooses to analyse. The first is in The World We Made, a novel by environmentalist Jonathon Porrit, then The Venus Project, a technology based political proposition, and finally Fully Automated Luxury Communism. In their analysis, Blomqvist uses a World Systems Theory approach to evaluate the ideas, critiquing the story of modernisation by framing it around colonialism. 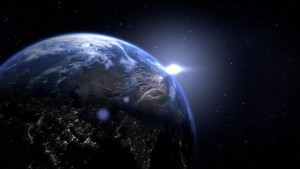 The World We Made is based on Design Fiction, where fiction inspires possibilities of new designs. It sees the human species in general as the villain responsible for destroying the environment. In the novel’s fantasy scenario, however, humans manage to turn things around and start to use technology and various existing world institutions for the common good. As Elliot points out, this book flags up an important discussion around the idea of the ‘anthropocene’ (a proposed name for a new human-affected geological epoch), which may support the view that the human species in general is the problem, rather than certain humans or, say, a capitalist growth-based economy. They also describe the book’s tendency towards technological optimism: it presents technology as providing the answers, without explaining how, and ignores the socio-cultural-political reasons for current ecological destruction.

The Venus Project is found to be even further along the techno-optimist spectrum and again ignores how its proposed technological utopia might be brought into existence. As well as highlighting its fetishisation of the scientific process, Elliot explains how The Venus Project often engenders conspiracy theories, a number of which are dangerously close to anti-Semitism.

Continuing the trend, FALC is found to involve similar techno-utopianism, where the working classes seize the means of production and use automation to create a world of plenty. Elliot points to a blind spot, as FALC doesn’t consider the limits of post-industrialism beyond the western world. Elliot describes how all three rely heavily on ‘pulling the magic lever’. While they show imagination, they are limited by the fossil-fuelled mentality they seek to criticise.

In our discussion at Not the Anarchist Bookfair, we asked participants to discuss two questions:

The questions were discussed in pairs, in small groups and then with everyone participating, and led to a broad discussion of the various themes raised. Some key points that came out included:

A number of participants were keen to continue discussions and we are considering further forums to hold related future discussions. Corporate Watch is currently working on a technology project, if you are interested in knowing more or collaborating on future work, please email contact@corporatewatch.org. To get involved with discussions as part of the Plan C Climate cluster contact london@weareplanc.org

(this article was also published on the Plan C blog, here, and Uneven Earth, here)