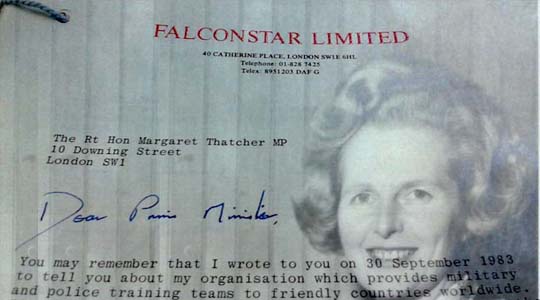 Trevaskis wrote to Prime Minister Thatcher in September 1983 to inform her that Falconstar was “in the process now of completing a major contract with the Government of Uganda, where we have trained over 1,500 Special Force constables in two years”, adding that this had “made a large contribution to internal security and to foreign investors’ confidence in Uganda”.

Thatcher’s private secretary, David Barclay, wrote in reply: “Mrs Thatcher was most interested to read about Falconstar’s services, and sends her best wishes for continued success.”

Just months before in July 1983, Malcolm Rifkind, then Foreign Office Minister for African Affairs, had warned Obote about human rights abuses when he visited Uganda.

Human Rights Watch has said the civil war from 1981-1986 was characterized by “military excesses against civilians which are believed to have exceeded the brutality of the Amin era”. An estimated 300,000 Ugandans died and 500,000 were displaced.

Corporate Watch found the papers among Downing Street files released under the 30-year-rule at the UK National Archives. This latest revelation comes from the same batch of Thatcher’s correspondence which showed the Prime Minister secretly dispatched an SAS officer to advise the Indian government on storming the Golden Temple in Amritsar and gave tacit approval to SAS veterans training Sri Lankan commandos to suppress Tamil rebels in 1984. The respective situations in Uganda, Sri Lanka and India’s Punjab region ranked among the world’s worst conflicts in the mid-1980s.

Corporate Watch has seen reports of atrocities allegedly perpetrated by this unit during the time of Falconstar’s involvement.

Falconstar, which ceased trading in 1985, described itself as a business operating, “in any part of the world as trainers and instructors for armed forces, police forces and military and paramilitary bodies”, according to archived accounts obtained by Corporate Watch from Companies House.

They show the company was prepared to offer training in weapons, riot control, sniping and surveillance. 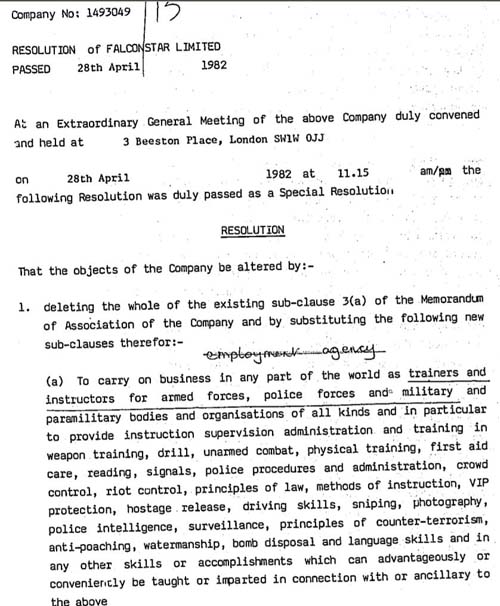 Director Jeremy Trevaskis also wrote in his letters to Thatcher that his company aimed to provide a, “politically very important service from Britain to friendly foreign and Commonwealth countries.”

He assured Thatcher that, “all work undertaken by the company is discussed freely with the FCO [Foreign Office] to ensure that Britain’s interests are not in any way jeopardised. No operational work whatever is contemplated.”

However, the company recognised its work could be seen as British support for foreign regimes. Trevaskis stressed an advantage was, “Falconstar provides a service which it is not always possible for the Government to provide for a number of reasons.”

At that time, serving British soldiers were only operating in Uganda as part of a multi-national team under the Commonwealth Secretary-General to assist with basic training of the Ugandan infantry.

The letter shows Trevaskis was aware of the sensitivities surrounding unilateral British involvement. He explained to Thatcher that, “there are times when it is either not appropriate or not possible for a BATT [British Army Training Team] to be sent to a foreign country; on these occasions, a Falconstar team can achieve much the same results both in terms of practical training and of international goodwill.”

Trevaskis sent a second letter to Thatcher in August 1984 that said Falconstar had, “great admiration for your leadership of this country”.

Falconstar ceased trading in 1985 and was reportedly bought out by a larger British private security firm, Defence Systems Ltd. This in turn was taken over by ArmorGroup, before being acquired by G4S in 2008.

Jeremy Trevaskis later became a stockbroker, according to records of directorships held by Companies House. In 2011 he appeared to be working as a director for mining giant BUMI, involved with their operations in Mauritania (PDF). Corporate Watch was unable to contact Trevaskis for comment.

“For UK Eyes Only”

Despite the pretence of arms-length involvement, there are indications that the unit Falconstar trained was in fact conceived by the UK Foreign Office years earlier. Britain’s Overseas Police Adviser had visited Uganda in 1980 and compiled a confidential dossier, marked “for UK Eyes Only”, about restructuring the country’s police. This included a comprehensive plan for a ‘Police Field Force’, which bears remarkable resemblance to the Police Special Force unit that Falconstar would later train.

The Adviser described his idea of a Field Force “being a paramilitary body, [that] should be organised on recognisably military lines”. Recruits would attend, “a special course with heavy emphasis on Internal Security (i.e. Riot Control, minor tactics and repeated lectures on the law relating to public order)”. He warned that this unit should not “be allowed to develop (or deteriorate) into something comparable to the Waffen SS”.

The Adviser went as far as producing a detailed diagram of how the unit should be organised so it was “capable of deployment anywhere in Uganda” and he agreed to advise on its creation. He also “met the Commander designate of the as yet unformed Field Force and suggested that, “the development of this Force should be phased over, say, 3 years”. That time-frame corresponds almost exactly with Falconstar’s contract to train a Police Special Force.

A company with colonial counter-insurgency expertise

In his letters to Thatcher, Trevaskis named his father, Sir Kennedy Trevaskis, a former British colonial governor of Aden, and Major General Corran Purdon, a counter-insurgency veteran as other Falconstar directors beside himself.

He said Purdon was “well known to Field Marshal Sir Edwin Bramall”, who was then Chief of the Defence Staff.

Purdon himself had considerable counter-insurgency experience, having served in Palestine, Malaya, Cyprus and Borneo at the time of armed anti-colonial struggles. He was the Sultan of Oman’s Director of Operations during the Dhofar War.

In 1963, Sir Kennedy Trevaskis was injured in the grenade attack at Aden airport which marked the start of a successful four-year uprising against British colonial rule on the Arabian peninsula. 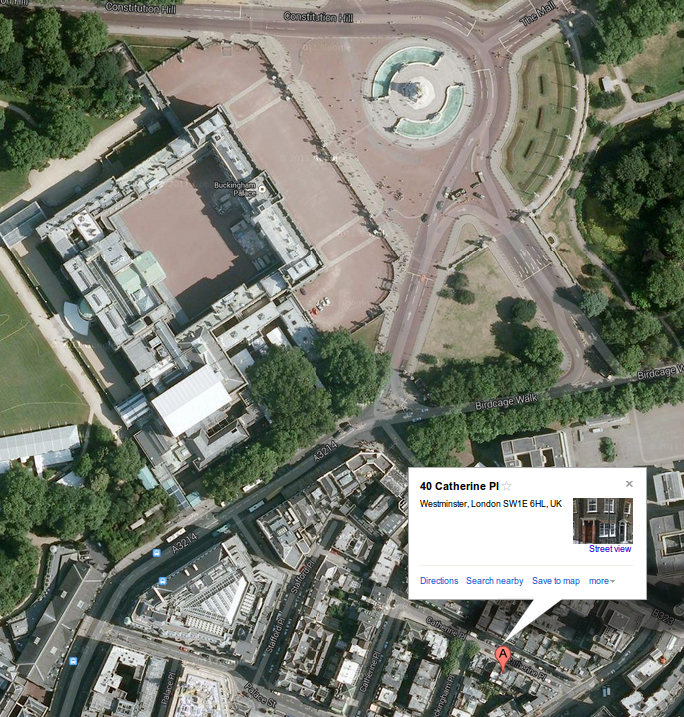 Falconstar registered its offices to 40 Catherine Place, London SW1E 6HL, which is a terraced property in Victoria close to Buckingham Palace.

Falconstar’s accounts reveal that its “ultimate holding company is Havens Limited”. This was another UK registered company, registered to the same address.

The accounts of Havens Limited contained a lot more detail and showed that the Trevaskis family were the majority shareholders, but also that a Sheikh Ahmed Farid Mohammed Al-Aulaki from the Bank of Credit and Commerce International (BCCI) held a 21% share.

BCCI crashed in 1991 in what was dubbed the world’s biggest ever banking fraud.

The bank was linked to laundering the proceeds of drug smuggling, arms trafficking, prostitution, the Afghan Mujahideen, Panamanian dictator Manuel Noriega, and the CIA.

The extent of BCCI’s relationship with British intelligence agencies remains unclear. Lord Justice Bingham’s 1992 report into the bank contained an appendix on BCCI’s dealing with MI5 and MI6, but only a heavily redacted copy has ever been made public.[6]

Haven’s accounts show the business generated a modest post-tax profit, making £64,000 for the financial year 1982-1983. Its ‘principal activities’ were described as “vendors of military equipment and security agents for military personnel in developing countries”.

The company sold ‘military equipment’ worth over £150,000 that year, although it is not clear who the customer was. The accounts give an “analysis of turnover by geographical market”, which reveal the company also did business in the US and Sierra Leone.

Their work in Uganda was invoiced at over half a million pounds from 1983-1984. 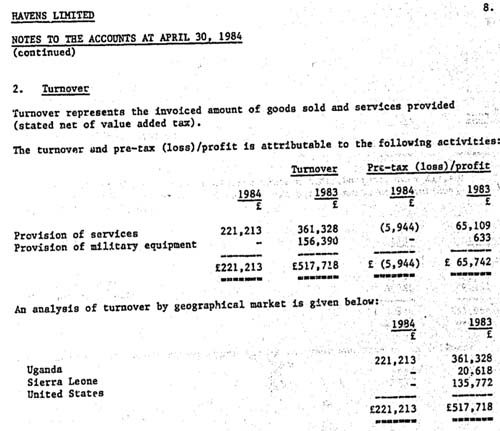 Havens’ final set of accounts dated 1984 reveal the company “continued to negotiate new contracts following the completion of the Ugandan contract during the year”.[7] However, this appears to have been ultimately unsuccessful, because the accounts show Havens ceased trading in May 1985 and the subsidiary Falconstar was “subsequently sold”.

The company’s collapse may have been triggered by the British Government’s decision to engage unilaterally with the Ugandan military from 1984, thereby eliminating the need for any deniability that Falconstar had offered. Britain’s policy on Uganda continued to cause controversy in Parliament, and left Whitehall with strange bedfellows. Most other countries had already withdrawn their military advisers from Uganda, with the notable exception of the North Koreans.

If you have any more information about Falconstar or the Ugandan Police Special Force from this period please contact Corporate Watch on +44(0)207 426 0005 or email contact[at]corporatewatch.org (replace the [at] with an @)

[7] For example, Trevaskis’ second letter to Thatcher mentioned that Falconstar Director Peter Le Marchand made an “exploratory visit” to Sri Lanka in August 1984 and met the National Security Minister Lalith Athulathmudali with a view to providing counter-insurgency consultancy and training. 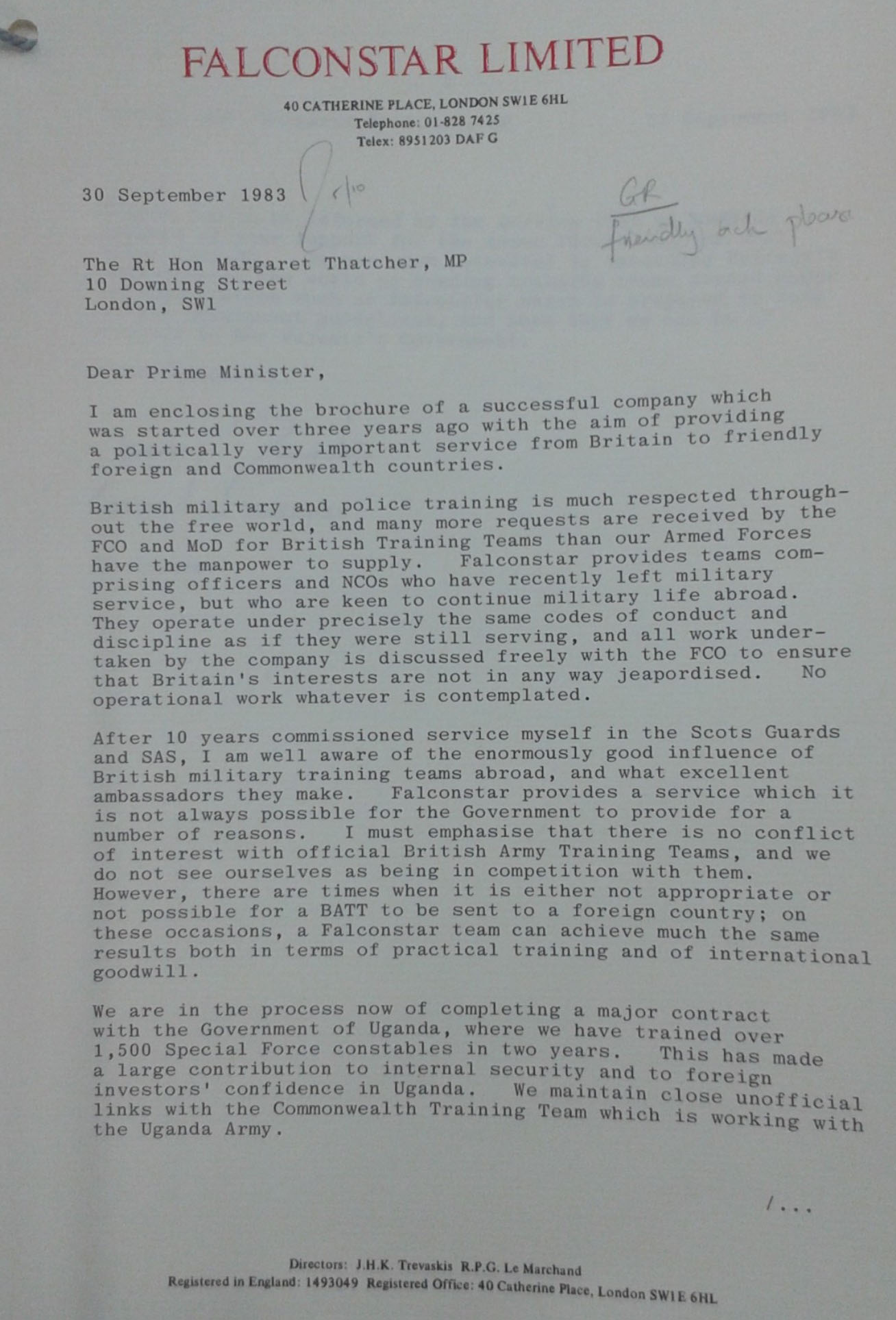 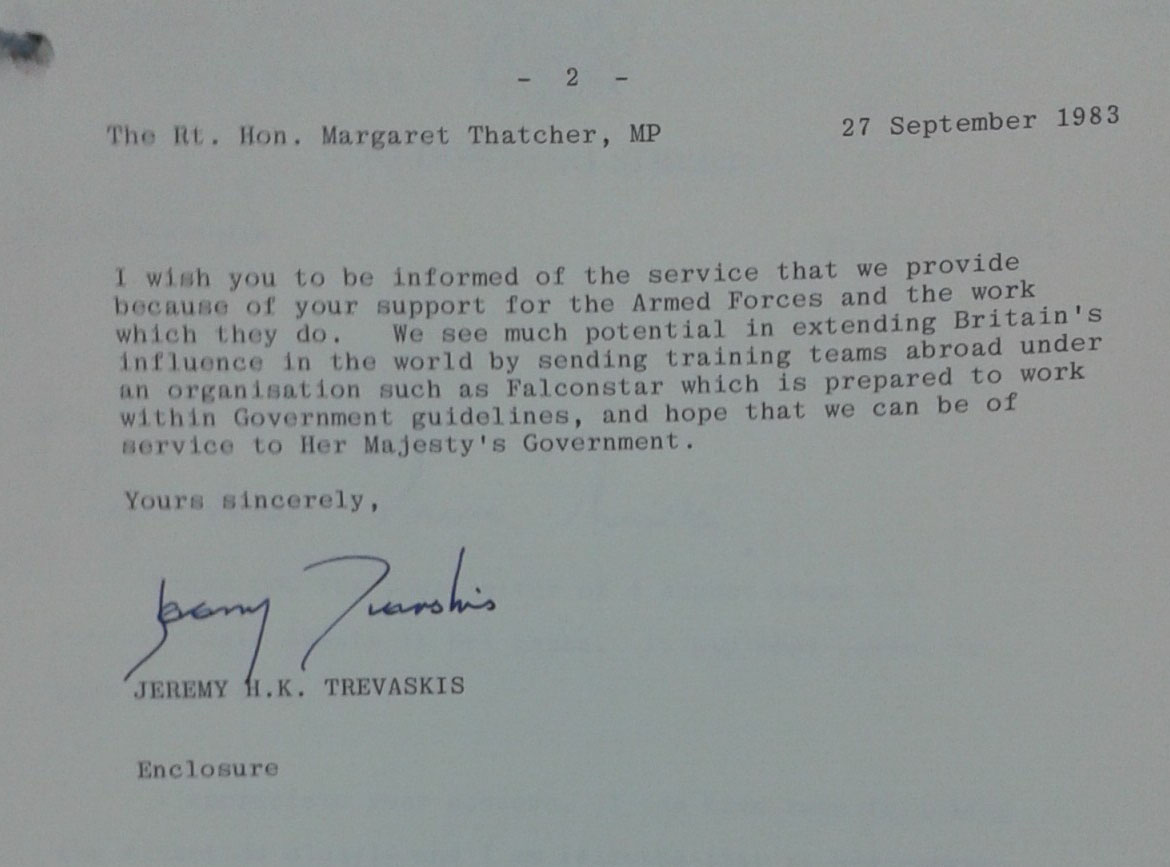 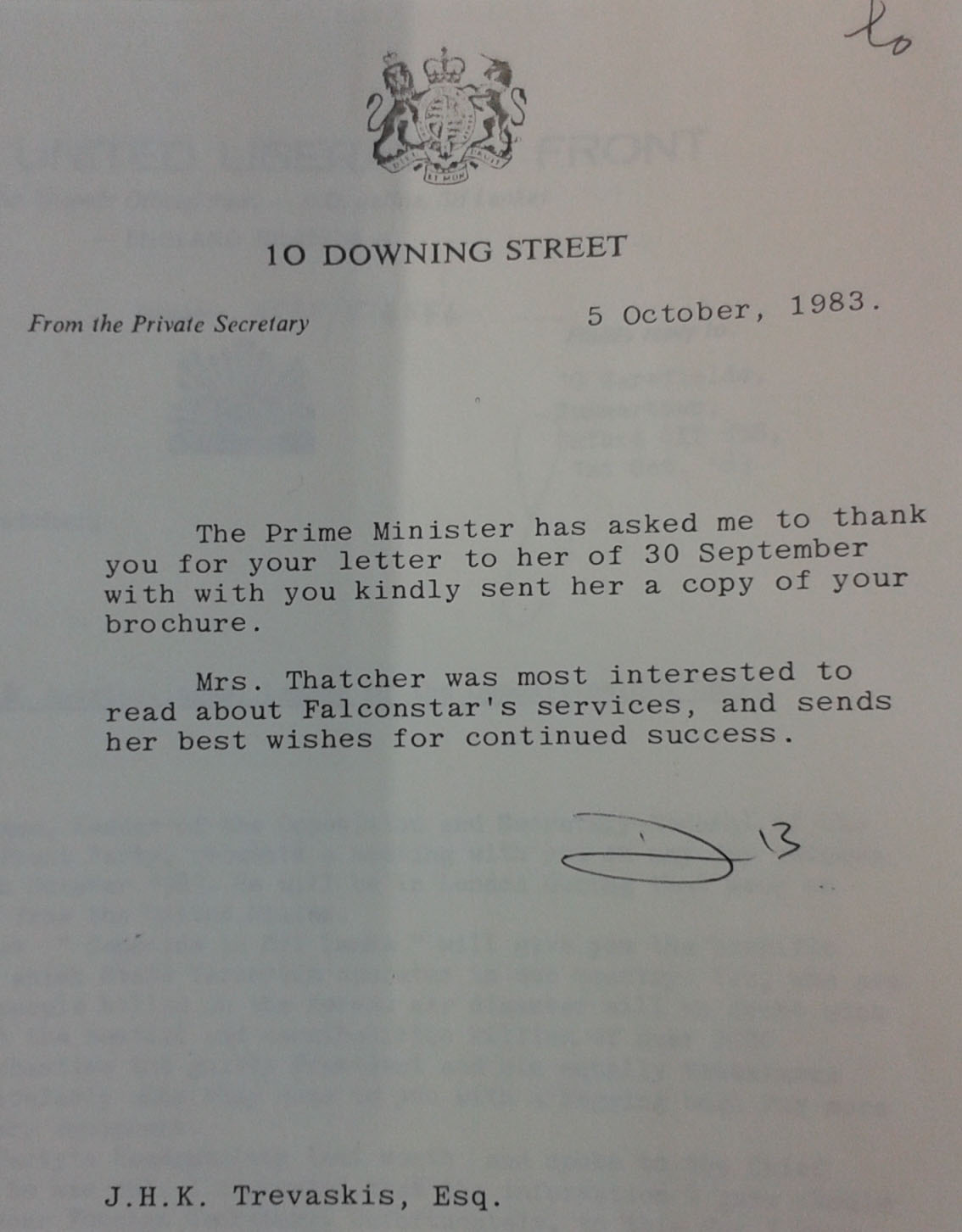 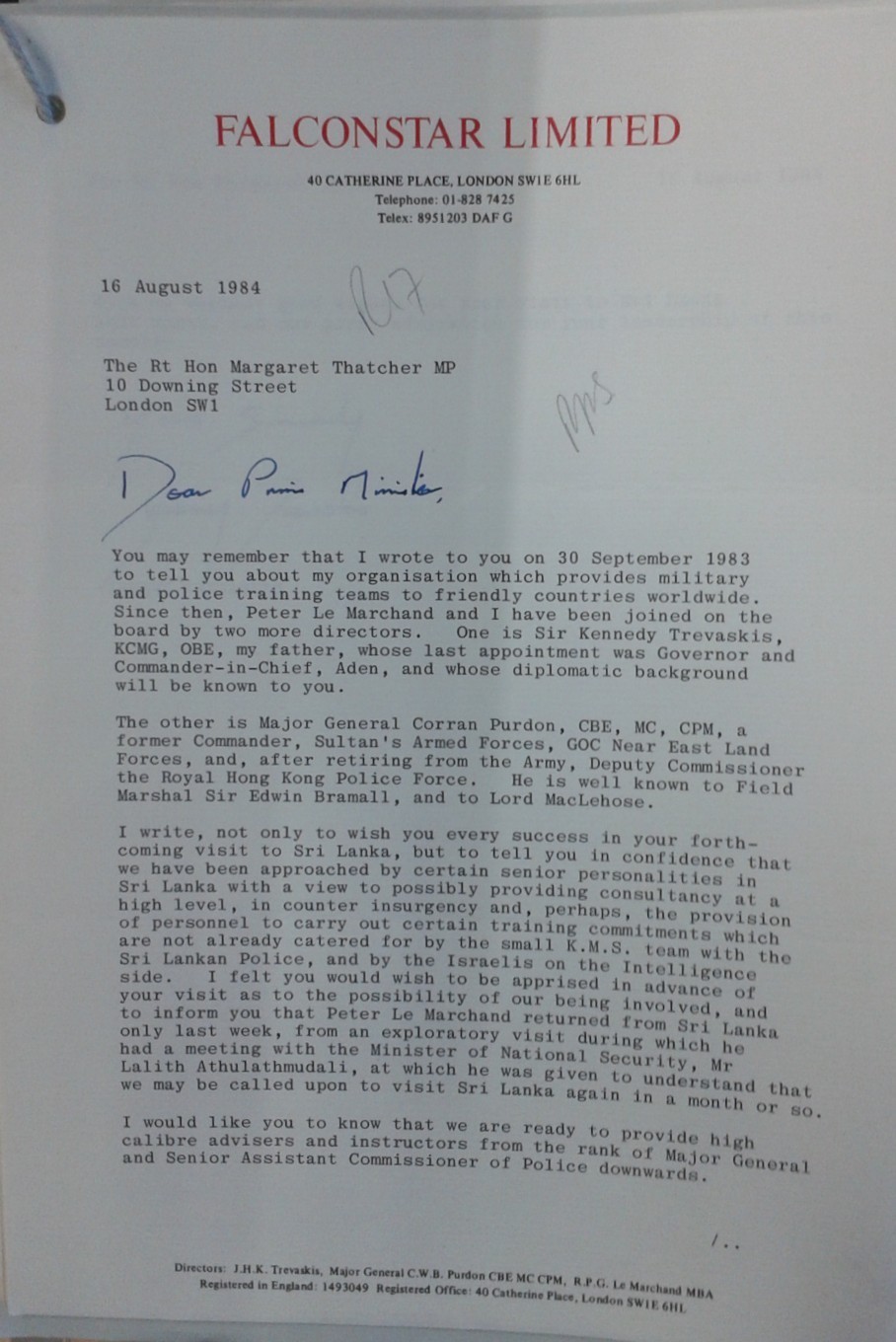 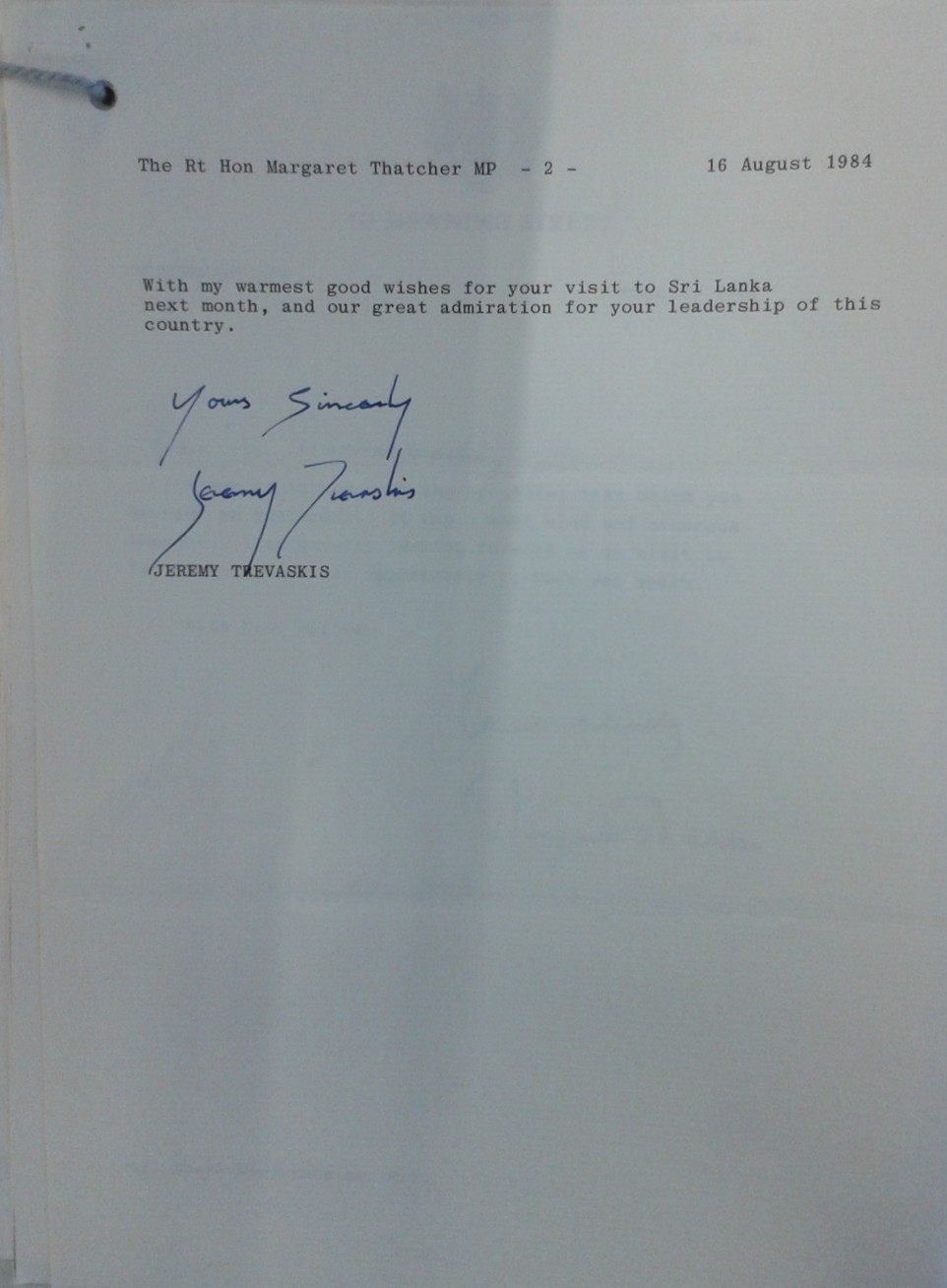 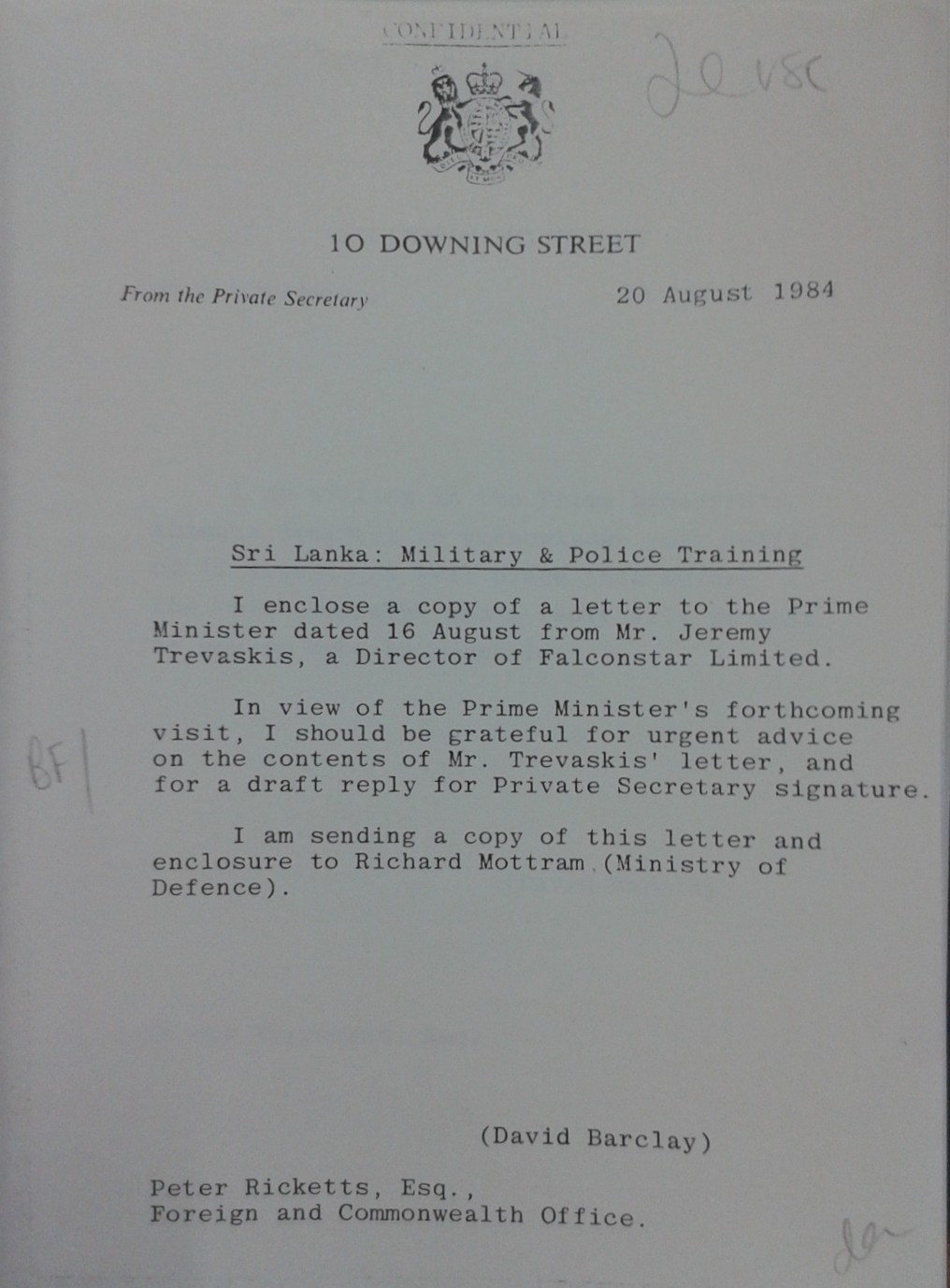 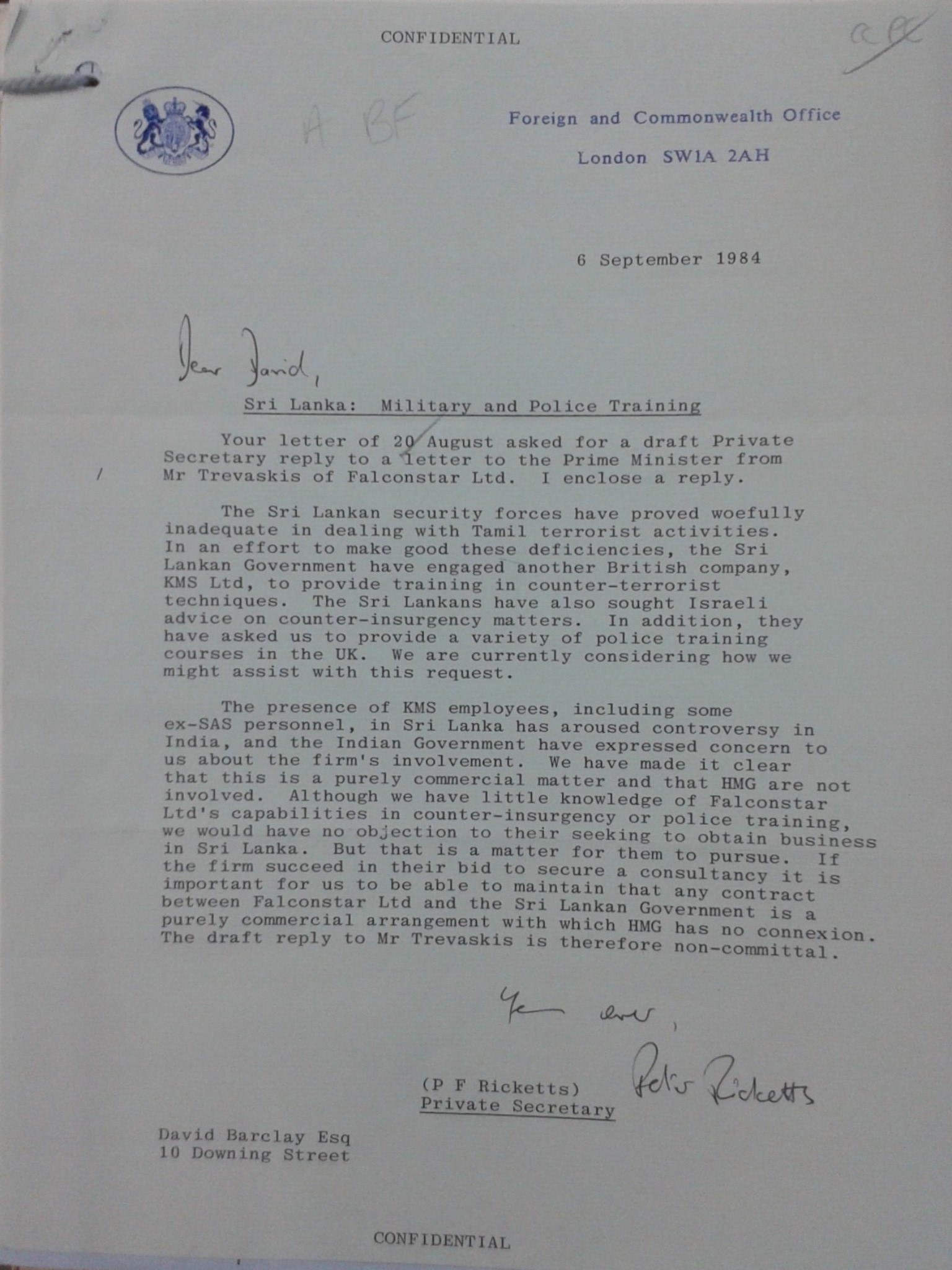 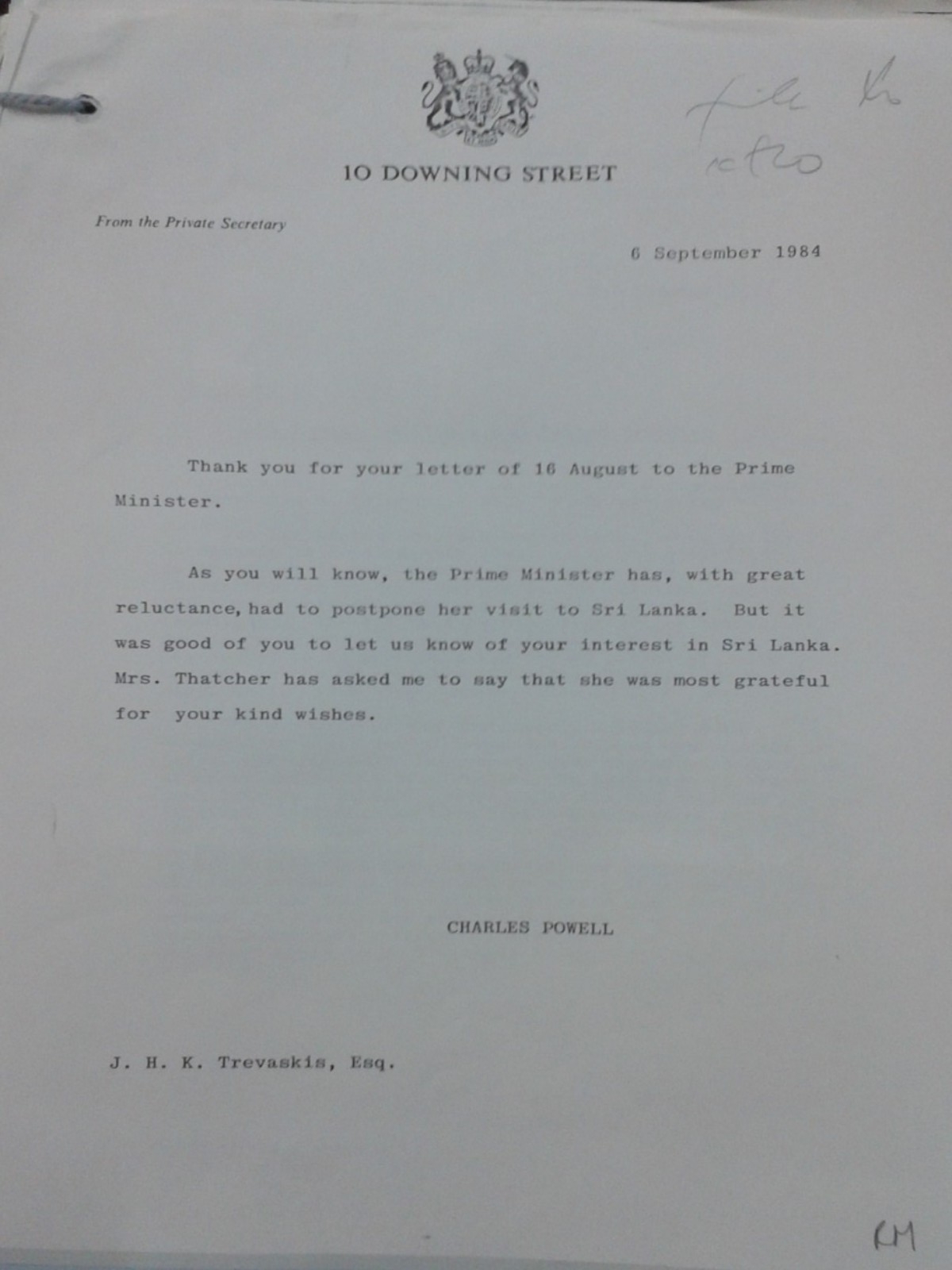