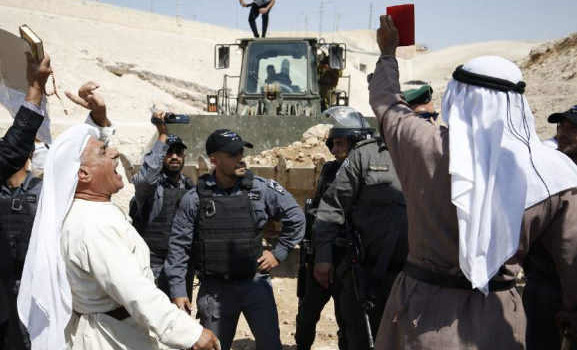 In addition 27 UK universities hold investments in HSBC (either directly or indirectly), five invest in Caterpillar and four invest in Volvo.

Some of the information in this article is based on a database prepared by the Palestine Solidarity Campaign, which details UK university investments and partnerships.

This article is written in support of the Palestinian movement for Boycott, Divestment and Sanctions (BDS) against Israeli militarism, colonialism and apartheid. In particular, we hope this will serve as information for action for students taking part in the #ApartheidOffCampus day of action in the UK on November 27th

The Israel state carries out hundreds of demolitions of Palestinian homes and property every year.i Home demolitions are an integral part of the Israeli state’s continuing colonisation of Palestinian land. 461 demolitions were carried out in 2018 in the West Bank alone.ii

The pretexts given for home demolitions are varied, for example:

But, whatever the reason given by the Israeli state for demolitions, the overriding motivation is always the same: To push Palestinian communities off the land, and to facilitate the growth of Israeli colonies.

Home demolitions are ongoing within Israel’s borders too. During 2018, the state demolished the entire village of Al Araqib in the Naqab desert in the south of Israel 13 times.iv On each occasion they were met with steadfast resistance from the residents, and many of the demolished structures have since been rebuilt. In April 2018 the southern village of Um Al Hiran was ethnically cleansed and its structures demolished. It is to be replaced by a new Jewish-only community.v


In September 2018 thousands of Palestinians, along with Israeli and international supporters, were resisting the daily attempts to destroy the entire village of Khan Al Ahmar, a bedouin village close to the expanding settlement of Ma’ale Adumim. The Palestinian Boycott, Divestment and Sanctions National Committee (BNC) issued this call to action against the international companies taking part in the demolition:

“The Palestinian BDS National Committee calls for a global civil society effort for preventing the imminent destruction of Khan al-Ahmar. When campaigning for Khan Ahmar and other Palestinian communities at risk of destruction and forcible displacement, we urge everyone to… organize divestment and exclusion-from-tender campaigns against these companies in your trade union, church, university — or include these companies in existing campaigns — to raise the price of their complicity in egregious human rights violations.”

In July 2019, the Israeli state carried out demolitions on a massive scale in East Jerusalem, reportedly its largest act of ethnic cleansing since the military occupation of 1967.

The BNC wrote at the time:

“On Monday, Israel committed its biggest crime of ethnic cleansing since 1967, against the Palestinian neighborhood of Wadi Hummus in occupied East Jerusalem. In a military raid that began at dawn, Israeli soldiers destroyed, in just a few hours, the homes of hundreds of Palestinian families. This attack came almost immediately after an Israeli military court had authorized the demolitions. Another 116 homes are under imminent threat of demolition in Wadi Hummus.

The magnitude of the crime is not only its sheer scale.

If Israel’s aggressive home demolitions are not stopped now, other Palestinian communities will be next. In Jerusalem alone, at least one third of all Palestinian homes are at risk of demolition. This would mean the forcible displacement of some 100,000 Palestinians…

Israel’s ability to ethnically cleanse the indigenous Palestinian population of Jerusalem and to force Palestinians into Bantustans carved out by its illegal wall and settlements can be hampered by the mobilisation of people power.”

The BNC has specifically called for action against JCB, Volvo and Caterpillar.

The BDS movement is also calling for action against HSBC, as the company has substantial investments in Caterpillar. 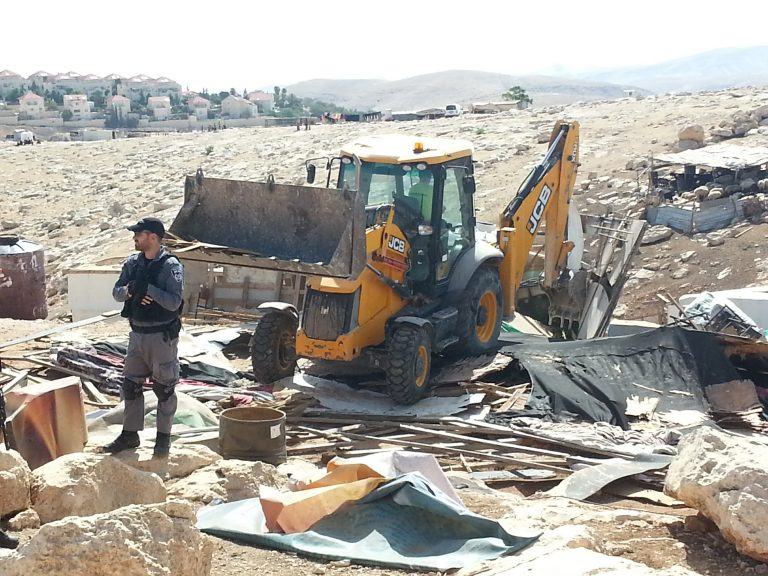 British company JCB manufactures civilian and military bulldozers which are used in Israel’s demolitions of Palestinian homes.vi During 2018, Shoal Collective found that JCB machines were used in demolitions of 130 structures, including 2 schools. At least 163 people were made homeless including 31 children.vii

JCB machines were also used in the Israeli demolitions which made thousands of people homeless in Wadi Hummus in July 2019.

Sheffield Hallam University’s (SHU) website refers to JCB as a ‘partner’. The university advertises that it offers vocational apprenticeship programmes in collaboration with JCB. These apprenticeships have been ongoing since 2015. According to the SHU website “[JCB] have developed a number of successful higher and degree apprenticeships with us, delivering a number of benefits to their business”. The website gives a number of examples of student apprentices who have gone on to work at JCB.

These student apprenticeships are a way of JCB increasing its skills base, and are highly beneficial for the company. According to Nigel Ward, a manager for JCB “The advantage it brings to JCB is that we’re slightly ahead of the game in growing our own talent. We get a full spectrum of capabilities coming from an apprenticeship…”

SHU also advertises engineering courses which have been designed “in consultation” with JCB. This shows that JCB are able to shape SHU’s courses according to the company’s requirements.

Earlier this year, students at SHU made the following statement about SHU’s relationship with JCB and with other companies complicit in the occupation:

“Sheffield Hallam turns a blind eye any to an ethical framework when it comes to having ties with JCB, BAE Systems, Hewlett Packard, Rolls Royce, Volvo Trucks and Caterpillar. That’s why, following from the successful pass of a Boycott, Divestment and Sanctions policy at our Student Union in January 2019, we are on a mission to move beyond words into concrete actions to ensure students’ demands are heard, and their tuition fees are not used in forging such unethical collaborations and fueling more crimes against oppressed communities.”viii

By running this apprenticeship programme in partnership with JCB, SHU is helping JCB with it’s recruitment of skilled workers. In continuing this programme, even when the complicity of JCB in Israel’s home demolitions has been pointed out to the university, SHU is showing complete disregard for the Palestinian communities which are being wrecked by the Israeli state’s home demolitions.

In 2017 Warwick University collaborated on a research project with JCB. A JCB engineer is quoted on an industry news website, boasting that the project helped JCB to develop their vehicles.

In collaborating with JCB on the project, Warwick University is ignoring the calls from Palestine to “raise the price” of JCB’s complicity in home demolitions.

Britain’s newest university, the ‘New Model in Technology & Engineering’ (NMITE) Hereford has an ‘advisor’ from JCB. 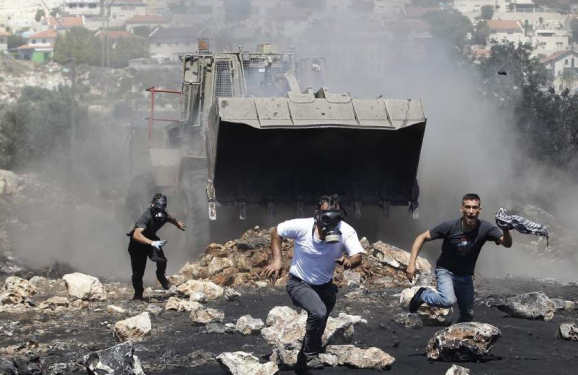 A soldier uses a Caterpillar military bulldozer to terrorise protesters in Kafr Qaddum.Photo by Mohamad Torokman.

US multinational company Caterpillar has become infamous for its support of the occupation. The company supplies D9 and D10 armoured military bulldozers, which are used in all of the Israeli military’s demolitions in the Gaza Strip.ix

Caterpillar machines are also used in the Israeli state’s punitive home demolitions, where the military destroys the homes and property of the families of Palestinians suspected of involvement in resistance against the occupation.x During 2018 Shoal Collective found that Caterpillar bulldozers were used in 7 punitive demolitions, and 86 invasions of the Gaza Strip.xi Caterpillar machines were also used in at least three of the demolitions of the entire village of Al Araqib.xii

Caterpillar bulldozers were used in the mass demolitions in Wadi Hummus in July 2019.

According to Shoal Collective:

“The D9 bulldozer is the Israeli military’s weapon of choice when carrying out its punitive demolitions, in contravention of international law. These demolitions are acts of collective punishment, aimed at wreaking vengeance on the families of Palestinians who are suspected of resistance.

Caterpillar’s non-military bulldozers are regularly used in Israel’s home demolitions in the West Bank, in settlement building and in working on Israel’s apartheid wall. They are also used to build roadblocks and checkpoints.”xiii

Sheffield Hallam University (SHU) offers year long work placements with Caterpillar on some of its Automotive Engineering, Logistics&Supply Chain Management and Electrical&Electronic engineering courses. The university boasts that many of its graduates have gone on to work for the company.

While preparations were underway to destroy the entire village of Khan al Ahmar last Spring, CUSA were promoting Caterpillar’s participation in a trade conference in Dubai. As Caterpillar machines prepared the ground for the demolitions in August 2018, CUSA published an article about the unveiling of new research at Caterpillar’s premises in the UK.

Arms dealer BAE, which has sold weapons to Israel, and Cemex, which owns the company that provided cement for Israel’s apartheid wall have also been a part of Cambridge University Service Alliance.

Last year, 40 Cambridge University student groups signed a call for Cambridge to end its partnerships with BAE and Caterpillar. The statement reads:

“We, the undersigned, call on the University of Cambridge to immediately terminate its partnership with Caterpillar Inc. and BAE Systems, as part of the Cambridge Service Alliance. By maintaining this relationship, the University has made itself, and us, shamefully complicit in war crimes…

According to research by Palestine Solidarity Campaign, “Loughborough University and Caterpillar UK Ltd have signed a partnership agreeing to collaborate on research to investigate new technologies for future Caterpillar products. The Caterpillar Innovation and Research Centre, part of Loughborough’s School of Aeronautical and Automotive Engineering, works closely with Caterpillar to develop new engineering processes and components.”xiv

This close collaboration with Caterpillar makes Loughborough University deeply complicit in the war crimes being carried out with Caterpillar equipment in Palestine. There has been a high profile global campaign against Caterpillar’s role in the occupation since 2003, so the management of Loughborough University cannot claim not to know what their partner is up to. To continue the partnership shows complete disregard for the Palestinian people experiencing Israel’s racist home demolition policy.

The following UK universities hold investments in Caterpillar (either directly or through an investment fund): 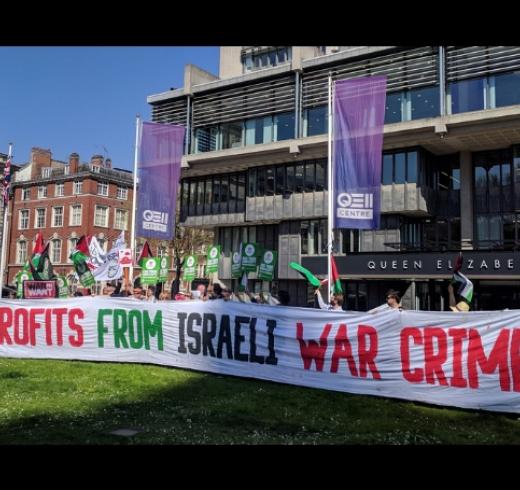 Protest outside the HSBC AGM. Photo from bdsmovement.net

HSBC is a sponsor of the Centre for Ethics and Law at UCL. The centre claims that it “promotes and enhances collaboration between corporates, practitioners, civil servants, academics and others around the broad themes of professional ethics and the ethics of risk”

Arms dealer BAE Systems is also a sponsor of the Centre.

The following UK universities hold investments in HSBC (either directly or through an investment fund): 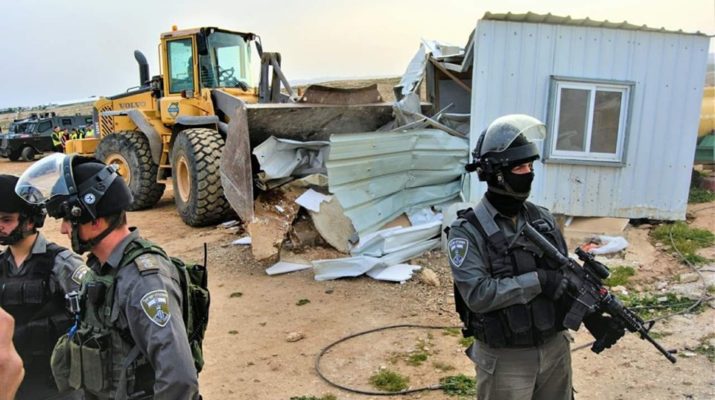 According to Shoal Collective, Volvo machines were used in the demolition of at least 102 structure in the West Bank during 2018, including two schools. Volvo equipment was used by the Israeli state to destroy the entire village of Al Araqib eight times.xv

Volvo Trucks is an industry partner of SHU, and several of its courses advertise that graduates have gone on to work for Volvo.

Volvo Trucks is part of Volvo Group (AB Volvo), which controls the manufacture of the bulldozers used in Israel’s home demolitions.xvi

The following UK universities hold investments in Volvo (either directly or through an investment fund):

Featured image is of Palestinians protesting demolitions in Khan al Ahmar in 2018, picture by Active Stills

Tom Anderson is part of Shoal Collective, and co-edits the Corporate Occupation website.

i Information from database compiled by Palestine Solidarity campaign UK through Freedom of Information requests.