Home
/
Environment
/
Tidemill: factsheet on the battle for Deptford

Early in the morning of 29 October around 150 bailiffs and police stormed into a community wildlife garden in Deptford, South London. This military-style invasion was ordered by Lewisham Council, paid for by Lewisham’s council tax payers. The council’s aim is to cut down the trees, and evict and demolish the block of 16 council flats next door, to make way for yet another new private housing development in one of the most densely built parts of London. But Deptford residents are not giving up without a fight …

What is the scheme?

The planned Tidemill development will contain 209 properties. There are three parts of the site: the former Tidemill primary school that has been closed and empty since 2012; Tidemill Community gardens, a wildlife garden created by local residents over the last 20 years; and Reginald House, a block of 16 existing council flats. The scheme will be built by a joint venture of Peabody Housing Association, Mullaley and Sherrygreen Homes.

According to the Council, 117 of the flats will be rented by Peabody at “London Affordable Rent”. While this is below market rates, it is some 63% higher than existing Lewisham council rents.

Lewisham’s deal with Peabody, Mullaley and Sherrygreen also involves a second scheme at a nearby site, Amersham Vale in New Cross. Together, the two sites are part of one “development agreement” called the Deptford Southern Housing scheme.

Amersham Vale will have 120 homes – only 24 for “London Affordable Rent”, with 15 shared ownership and 81 for private sale. So altogether on the two sites there will be 329 new homes, but only 43% for so-called “affordable” rent. The Amersham Vale plan was approved and cleared in 2016, but work has still not started there. It is not clear why. 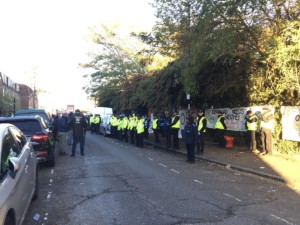 Deptford is an extremely built up area with very few green spaces, which are disappearing at a frightening rate. The community garden is a very rare “oasis” of greenery and wildlife in the area. It has been tended by self-organised local volunteers over 20 years. It was created by children, parents & teachers when school grounds were considered part of the community, not real estate to be developed. This kind of neighbourhood ecological scheme should be celebrated and helped to flourish, not destroyed.

The scheme involves demolishing Reginald House, a block of 16 council flats. The building is structurally sound and does not need demolishing. The residents oppose the plan, and 13 of them have written to the GLA saying they want to stay in their homes. If the scheme goes through, they will be offered homes in the new development – although they will lose their (“secure”) tenancies with the council and instead become Peabody tenants. It is Labour Party policy, both nationally and in Lewisham, that council tenants should have a ballot on any demolition of their homes, and on transfer of their tenancies to a housing association. This is being totally ignored.

The new “affordable” homes will not be at the same rents as existing council flats, or even as housing association “social” homes. They will be set at the higher “London Affordable Rent” level, a new label defined London-wide by mayor Sadiq Khan. As Inside Housing puts it, while London Affordable Rents are below market levels, they are “significantly north of social rents in the capital”. In Lewisham, the council’s own documents show that they are 63% higher than council rents (for a two bedroom flat).i Also, the new homes will not be council homes, but run by private landlord Peabody.

Deptford is an extremely built up area – in fact the most densely populated part of Lewisham. Evelyn ward has the highest population density in the borough, currently estimated at 12,607 people per square kilometre; the Tidemill scheme is just inside the neighbouring New Cross ward, which is one of five wards with over 10,000 people per square kilometre. With multiple new developments taking place nearby, this overcrowding will soon be even worse. Other parts of the borough are much less built-up: for example, Bellingham with 5,228 people per square kilometre or Blackheath with 6,677. Yet the council wants to cram even more people into this already packed area.

The Tidemill scheme involves handing over public land – the former school and garden – to private developers who will build homes for profit. While the Council is keen to talk about the “affordable” housing, there are also 51 homes to be sold at full market price, as well as 41 “shared ownership”. None of these will be in the reach of most Deptford residents. Similarly, the Amersham Vale scheme means handing over more public land – actually, another former school site – to build 81 private sale flats.

And in another nearby development in New Cross, Lewisham is developing “up to 300” new homes on an empty site in Besson Street where council homes were demolished. The Besson Street scheme will be run by a 50/50 joint venture of Lewisham Council and the private “build to rent” landlord Grainger. Not one of the homes will be for “social or affordable” rent. 65% will be for full market rent, and 35% for “London Living Rent”, which is well above council or “London Affordable” levels.

In general, Deptford has been transformed in recent years with massive new private developments spreading from the river, creating thousands of homes for private sale and for speculation by landlord-investors. Few of these have included any social housing. In 2014-17, 4,816 new homes were built in the whole of Lewisham. Only 600 (12%) were for any form of “affordable” rent. (See the London Tenants Federation briefing on new housing across London.)

Deptford has long been a working class and very mixed multi-ethnic neighbourhood. The massive private development is rapidly destroying the social fabric of the area. Rising rents push out both residents and affordable shops, which are replaced by yuppy wine bars and hipster boutiques. Lewisham council has helped along this social and racial cleansing of the area, supporting private development and doing nothing to protect working class residents. Of course, the Labour councillors are themselves middle class professionals and property owners.

Cutting down trees is the last thing anyone should be doing in a built up urban area – or, indeed, anywhere in this world. The community garden contains 74 trees according to the scheme’s Tree Demolition Survey (or 124, according to an on the ground survey by Tidemill campaigners). The tree canopy has been proven to mitigate air pollution in an otherwise extremely polluted area between two major roads.

To push the scheme ahead against the wishes of residents, Lewisham has installed an occupying army of security guards to protect the site. Currently there are between 40 and 60 guards present 24/7, costing an estimated £35,000 per day. Even before the recent garden eviction, the council had already spent an estimated £1 million, according to residents’ groups, to secure the old school since 2016.ii 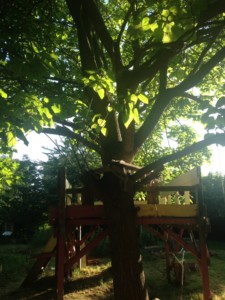 These are some of the main players behind the scheme. We plan to publish short profiles on each of them.

In particular, a handful of key councillors are actively pushing the scheme. These include: Damien Egan (mayor of Lewisham): Paul Bell (cabinet member for housing); New Cross ward councillors Joe Dromey, Paul Maslin and Brenda Dacres. (See our report here on these councillors.) 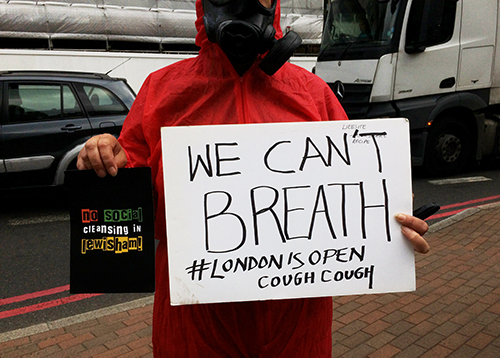 Lewisham council has one basic argument: there is a housing crisis, we need more “affordable” homes, and this scheme includes 104 of them.

Tidemill defenders may counter: yes, by all means build new homes for working class people (though ideally actual council homes not Peabody homes at “London Affordable Rent”). But you don’t need to destroy the community garden and the existing Reginald House flats to do it.

Lewisham Council: but there is nowhere else to build them – “it’s a choice between the garden and new homes”.

Tidemill defenders: that’s rubbish. In fact defenders have proposed one alternative scheme which involves building more on the old school site instead of the garden and existing flats. Or what about building them on Besson Street, the nearby New Cross site where Lewisham plans to build up to 300 homes for “private rent” — not one of them “social” or “affordable” — in a commercial Joint Venture?

And those are just two proposals. There are many other construction sites across Lewisham. The council should stop letting private developers make mega profits by covering them with luxury tower developments, and instead insist on new council homes.

Lewisham Council: it’s too late now to change the plan. Investigating an alternative plan would cost money, and upset our private partners who have already sunk hundreds of thousands into this deal, including drawing up detailed plans, so we have to push ahead.

Tidemill defenders: so you’re just determined to push through with a bad deal whatever the people who live here say? As for cost, you’ve already spent £1 million on securing the school site while it’s been empty, and are now spending some £35,000 every single day for the security army occupying the garden.

Tidemill defenders: is that really all you so-called left wing Labour councillors can come up with, just bowing to the inevitable destruction of working class neighbourhoods? You really don’t have any other ideas? You’re not going to do anything to fight for what’s left of our city? Or could it be you don’t actually give a toss about the people you claim to represent? That you just cynically use working class residents for votes, then cosy up with developers … 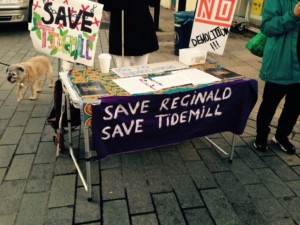 The scheme has three phases:

Phase 1: destroy and build on the garden, and also on land behind Reginald House.

Phase 3: move out Reginald House residents, demolish and build on the site.

Why is it so important?

Tidemill is just one small battle, a corner of one London neighbourhood. But it is also part of a much bigger war over our city.

This is a class war. On the one hand, arrogant elites who treat our homes and neighbourhoods like they’re playing a game of monopoly. On the other, those of us on low incomes who cannot survive in this city without genuinely affordable housing and community resources.

But it is also a war of two utterly different visions of what London can be. Totally absorbed in the logic of the market, Labour councils like Lewisham can’t see any possible alternative to profit-led private development. Stuck in this cold vision, they have helped turn London into a corporate wasteland of identikit investment properties. Tidemill represents a very different vision of community, ecology, and self-organisation, which puts residents’ needs and creativity ahead of investors’ profits. 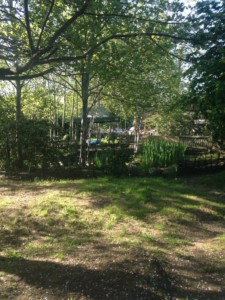 iThis figure is for a two bedroom flat. For full comparison of different sized properties, and much more detail, see: http://crossfields.blogspot.com/2018/05/tidemill-reginald-road-update-2.html For more on LAR rents across London see: https://www.insidehousing.co.uk/insight/insight/the-opaque-art-of-rent-setting-london-affordable-rent-explained-56184 Some Lewisham councillors repeat the claim that “London Affordable Rents” are “social rents”. This is blatantly untrue, both in terms of the definition of how they are set, and in terms of their levels.

iiThe council has confirmed in a Freedom of Information request that it spent £577,000 on keeping caretaker guards in the school from July 2016 to June 2017. The number of guards was ramped up after this point, and costs will have substantially increased. https://www.whatdotheyknow.com/request/security_costs_at_old_tidemill_s