Home
/
Consumer Goods
/
To pay or not to pay: Asda and Argos choose workfare over work 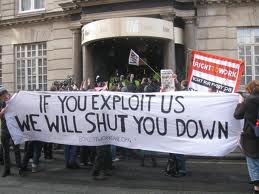 The campaign against workfare has claimed some major successes over the last month, with Sainsburys, Waterstones and TK Maxx bowing to pressure and pulling out of some (though not all) of the government’s workfare programmes. Other companies now face a dilemma: do they also withdraw to avoid further bad publicity, or do they continue to enjoy the free labour that workfare brings? Corporate Watch finds the benefits of workfare for retailers such as Asda and Argos make it difficult to say no to.

Over the Christmas period for example, the government’s eagerness to send unemployed people on unpaid placements meant stores did not need to go to the trouble of hiring and paying temporary workers as they would normally.

Joe Wilson, a 21 year old on Jobseekers Allowance, worked a four-day week, unpaid, for six weeks from the middle of November at the Asda superstore in Harrogate, Yorkshire. He told Corporate Watch:

“There were about 15 of us on placements. The manager said they had overspent on stocking Christmas stuff so they’d got people in on placements [to save money]. The paid staff told us they were being asked to leave before they’d ended their shift as we could do the work. I worked Christmas Eve and New Year’s Eve. They arranged it so everyone came in those days.”

His Jobcentre had said that if he didn’t attend the placement his benefits could be stopped:

“The Jobcentre had got a group of us in for CV writing training. It was really obvious stuff – don’t use a crayon and so on. When we were there they said some people had come to speak to us about a work experience programme. Then a few days later I got a letter saying that, as I’d expressed an interest they’d be organising a work placement. The letter said if I didn’t go they’d stop my JSA. I’d never said I wanted to do a placement in Asda.”

A claimant in Bristol told Corporate Watch how paid Christmas work in the Argos store in the Galleries shopping centre disappeared when the company realised it could get people in for nothing on workfare placements. ‘Jason’, who wishes to remain anonymous, said Seetec, the ‘provider’ company that he was sent to by the Jobcentre, had arranged an interview for him and 13 others for temporary work. They were not hired because the store instead took people on unpaid placements organised by Prospect, another employment provider company, which ironically has its Bristol office in the same building as Seetec.

A spokesperson at Asda’s head office told Corporate Watch that the company hadn’t received any reports of workfare placements replacing paid staff and they would “investigate further,” adding the placements were “not designed to substitute colleague roles”.

Despite several follow-up calls and emails, we have not heard anything since.

An Argos spokesperson told Corporate Watch that its stores had “liaised over our peak Christmas trading period with local job centres to offer working opportunities to job seekers through initiatives called work placements or work trial”. The retailer went on to say it is currently assessing whether its trials over the Christmas period will continue and that it “endeavoured to offer permanent roles to young people” after the placements.

Corporate Watch asked how many permanent roles had been offered but we have not received a reply. Prospect did not reply to any of our enquiries.

You’re supposed to find me a job, not turn me into a slave!

Workfare does not only replace paid work at Christmas. ‘Chris’ was sent to do a three month placement in Booker Wholesale in Bath. He told Corporate Watch that when the placement commenced the manager said that if he worked hard he would get a job, but he soon found out that this was unlikely:

“I asked the manager about jobs and he said: ‘keep working as you are and you will be fine’. The turning point came for me about two months in, when two part-time employees were laid off for stealing some alcohol. I thought there would be a job for me but they hired the brother of an employee already working there. I went to see the manager and he said that there were no positions. He suggested I could continue doing four days a week unpaid.

I left in disgust and took my last two days off. They had the nerve to say: ‘what if we are counting on you to be there?’ Then hire me! You’re supposed to help me find a job, not turn me into a slave.”

Workfare is becoming such a popular way for retailers to staff their stores that they are finding it hard to keep count of how many workfare staff they have. A spokesperson for entertainment retailer HMV told Corporate Watch its placements are organised on “a more localised basis” so it is difficult to “fully track all the placements in place across the chain at any one time.”

But at least the company is less coy than Argos and Booker about the likelihood these placements will lead to paid work, admitting: “it’s unlikely that [a] large number will go on to achieve full time paid employment with the company.”

Have you been sent on an unpaid work placement or do you know someone who has? Contact Corporate Watch on 02074260005 or contact[at]corporatewatch.org

Unemployed people ‘bullied’ into unpaid work at Tesco, Primark and other multinationals August 12, 2011

‘Making profits from the the unemployed is reprehensible’ August 12, 2011