Home
/
Environment
/
To the ends of the Earth: Underground Coal Gasification

UCG in the UK, and why we have to stop it

If setting alight underground coal seams sounds like a really bad idea, that’s because it is. Yet this is precisely what the Government and some particularly dodgy energy companies are planning to do all over the UK. So-called Underground Coal Gasification (UCG) is a way of producing fuel from underground layers of coal by igniting them, controlling the flow of air to the fire, and extracting the resulting gas to use as a fuel (see diagram). UCG, an ‘unconventional fossil fuel’, represents a new way of extracting energy from fossil fuels, and is part of what some campaigners refer to as the move towards ‘extreme energy’.

Before discussing UCG itself, it’s worth having a quick look at what is behind the shift towards these extreme forms of energy, and some of the consequences. Around the world we are consuming more and more energy. As the more easily-accessible forms of energy, such as conventional oil and gas, run low we are moving towards increasingly exotic and difficult-to-extract sources such as industrial biofuels, tar sands and UCG. With rising demand and increased scarcity, countries are also seeking to develop their own domestic energy sources in order to increase their energy security.

For economies to survive in our economic system, they must continually expand, and as they expand they consume more resources. It is this constant need for economic growth that is behind our increasing consumption of energy and other resources. While it is perhaps tempting to conclude that population growth drives energy consumption, both population growth and global energy consumption are symptoms of a wider problem: economic systems based on inequality, competition and growth. The highest rates of population growth are in economically poorer countries and regions. Some economically richer countries, such as Japan, actually have falling population levels.

The effects on water resources are particularly profound. Globally, freshwater is becoming more and more scarce. The UN predicts that by 2025 two thirds of the world’s population could be living under water-stressed conditions. The development of unconventional fossil fuels will dramatically increase global water consumption and leave enormous volumes of contaminated water. For example, the US Environmental Protection Agency estimates that fracking in the US uses 70 to 140 billion gallons (265 – 531 billion litres) of water per year, equivalent to the total amount of water used each year in a city of 2.5 – 5 million people. The huge poisonous lakes created by the tar sands industry in Canada now cover an area of 176km2. In 2002, the Estonian oil shale-fired power industry used a staggering 91% of all the water consumed in the country.

Then there is the effect on the global climate. Recent research has concluded that in order to avoid the most serious impacts and the risk of irreversible and uncontrollable changes to the climate, a total limit of 500Gt of carbon can be emitted to the atmosphere (1Gt = 1 gigatonne = 1 billion tonnes). Since the start of the Industrial Revolution we have already emitted 370Gt, leaving a limit of 130Gt that could be further added. In order to stay within this limit we would have to leave the vast majority of the remaining conventional oil, coal and gas in the ground. Estimates vary significantly, but remaining conventional coal reserves alone contain well over 500Gt of carbon. Developing unconventional fossil fuels and releasing the enormous amounts of carbon they contain is thus absolutely incompatible with staying below this limit or maintaining anything like a reasonably habitable climate (see carbon budget graphic on page 15 of ‘To the Ends of the Earth‘). 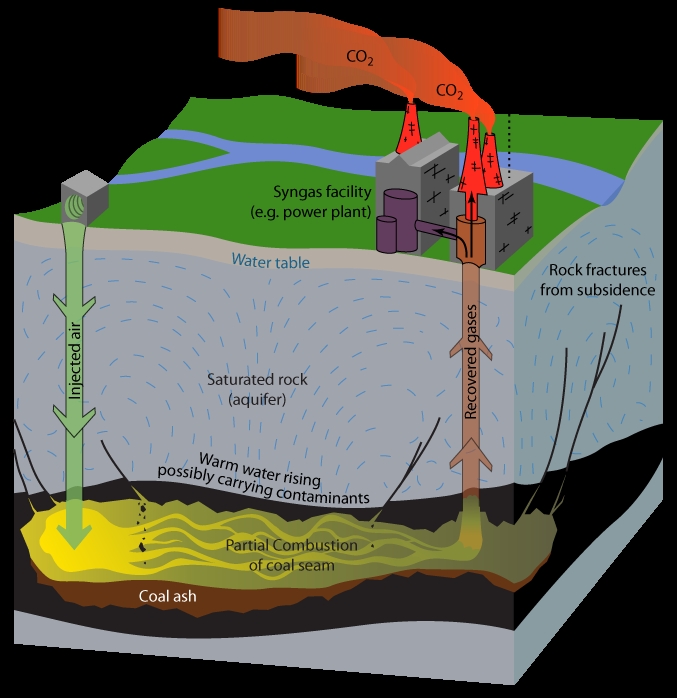 To counter concerns over emissions, proponents of UCG often argue it can be combined with Carbon Capture and Storage (CCS) for a low carbon form of  ‘clean coal’. However, there are serious concerns over the viability of CCS and UCG technologies, and there are no demonstrated projects where they work in combination. Despite industry claims that exhausted UCG coal seams would be ideal storage sites for CO2 produced during the process, there are in fact a number of serious problems that make them unsuitable. This has led investigations into UCG to conclude that they are unlikely to provide suitable carbon storage sites. There are also numerous critical problems with CCS itself, which remains a largely unproven technology, especially at the enormous scale that would be required. In the most optimistic (and highly implausible) scenario, CCS could be used to reduce a small proportion of emissions from fossil fuels. In reality, the promise of CCS being implemented in the future is being used to allow the continued expansion of fossil fuel production, to prevent alternatives from being developed, and to deflect attention away from approaches which tackle the underlying systemic causes of climate change and other ecological crises. Ultimately CCS is a smokescreen, allowing the fossil fuel industry to continue profiting from the destruction of the environment (see Corporate Watch’s new CCS fact sheet for more information https://corporatewatch.org/resources/2014/carbon-capture-and-storage-factsheet ).

Another issue is the amount of coal that UCG would allow to be accessed. Global coal resource figures vary significantly, but it has been estimated that there are still around 860 billion tonnes of coal remaining that could be accessed with conventional mining techniques, possibly enough to last over a hundred years. However, using UCG technologies, coal seams that are uneconomical to mine can be exploited, giving access to even more coal, conservatively estimated as an extra 600 billion tonnes. The real figure could be much higher, as the total global coal resources (which includes coal that cannot be accessed with current technology) have been estimated to be in the trillions of tonnes. In the context of climate change, developing new technologies that give access to greater coal resources is the last thing we should be doing.

Strictly speaking UCG is not a new technology. The idea has actually been around for a long time, and experiments have been carried out since 1912 in the UK. The use of the technology peaked in the 1960s in the Soviet Union, with up to 14 industrial-scale UCG fired power plants operating at different times between the 1950s and 1960s. Except for the Angren plant still operating in Uzbekistan, all the USSR’s plants were closed down by the end of the 1960s following significant natural gas discoveries.

Initially projects exploited shallow, easily accessible coal seams, but recent technology, such as directional drilling, means that deeper and harder to reach seams can now be accessed. Recent pilot projects have been carried out in Australia, China, New Zealand, South Africa, New Zealand, Canada and the US. A host of other countries are developing projects including the UK, Hungary, Pakistan, Poland, Bulgaria, Chile, China, Indonesia, India, and Botswana.

The various UCG projects that have been carried out around the world have been plagued with accidents, including examples of catastrophic groundwater contamination. In the 1970s a project at Hoe Creek, Wyoming, in the US resulted in massive groundwater contamination. Potable groundwater was polluted with benzene, requiring an expensive long-term clean up operation. In 2011, Brisbane based company Cougar Energy was ordered to shut down its trial UCG project at Kingaroy due to environmental concerns over benzene contamination. Cases of contamination shouldn’t come as a surprise given that UCG creates a number of toxic contaminants, including carcinogens like benzene and toluene. Altogether, 135 compounds that might pollute the local groundwater sources near UCG sites have been identified.

As with other unconventional fossil fuels, UCG consumes large volumes of water and produces large volumes of contaminated water. Other problems include the risk of explosions and accidents, subsidence, increased air pollution at UCG sites, uncontrolled coal seam fires and industrialisation of the countryside. If the technology was to be implemented in the UK on any scale it would result in hundreds, maybe thousands of UCG sites across the country. Around 20 licences have in fact already been issued around the coast of Britain, with the hope that off-shore sites will attract less opposition and allow the industry to gain a foothold. There is also an application for a site in Warwickshire, which could become the first to utilise the technology.

Unless we stop it, UCG is coming to the UK, posing a serious risk to our local environment and the global climate. However, the shift to unconventional fossil fuels is also resulting in some unexpected, even positive, consequences. Around the world people are resisting, from the first nations communities in North America to Romanian villagers, people are rising up against the exploitation of their land and people. In the UK fracking has already re-ignited the environmental movement, with thousands resisting and dozens arrested for taking direct action at protest sites which have sprung up around the country. As we move towards more extreme forms of energy extraction, unconventional fossil fuels are connecting local struggles to those fighting for broader environmental and social justice. Stopping UCG in the UK could be an important step towards the radical systemic changes required if we are to exist in harmony with nature.

For more information on unconventional fossil fuels see Corporate Watch’s new report: To the Ends of the Earth (https://corporatewatch.org/publications/2014/ends-earth-guide-unconventional-fossil-fuels ).

For more information on resistance to unconventional gas in the UK see www.frackoff.org