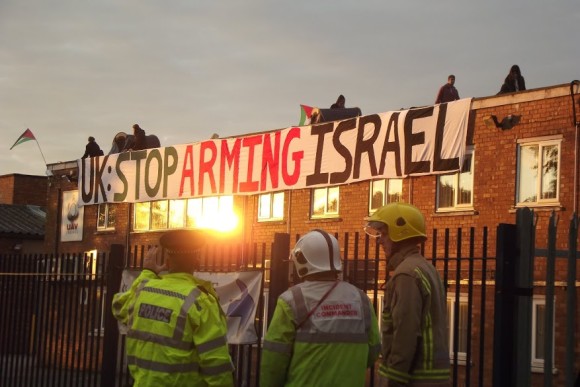 A UK subsidiary of the Israeli arms manufacturer Elbit was shut down for two days last week in a protest against the company’s complicity in the ongoing massacre in Gaza.

UAV Engines, based in Shenstone, Lichfield, produces drone engines and components which, according to government data acquired by by Campaign Against the Arms Trade, have been exported to Israel in 2010, 2011 and 2012. Amnesty International had previously uncovered evidence that engines from UAV Engines were incorporated into the Israeli Hermes 450 drones, which were used during Operation Cast Lead in 2008-2009.

Elbit is Israel’s biggest drone producer and one of the world’s largest exporters of drone technology. The company has been known to use the fact that its technology has been ‘combat proven” as a sales pitch, meaning that its weapons have shown their effectiveness when used to massacre Palestinians. According to the Electronic Intifada, Elbit’s US share price had risen by 6.1% by the end of July, three weeks into Israel’s latest onslaught ‘Protective Edge’. For Elbit, mass murder equals good business.

The UK’s Ministry of Defence is currently working with Elbit on the one billion pound Watchkeeper programme, a joint venture project between Elbit and Thales UK. The Watchkeeper is designed for use by the UK military and is closely modelled on Elbit’s Hermes 450. UAV Engines is one of the factories involved in its production.

A different kind of occupation

At five o’clock in the morning on Tuesday 5th August, nine activists scaled the roof of the UAV Engines factory. Once safely at the top of the building, they proceeded to drop a huge banner reading ‘UK: Stop Arming Israel’, before they settled in for a long haul rooftop occupation, with the @LondonPalestine twitter account stating that they had enough supplies to last for a week. As police arrived on the scene after having been alerted by a worker, they found both entry gates locked shut by D-locks.

“By allowing this factory to export engines for killer drones to Israel, the UK government is providing direct support and approval to Israel’s massacres […] Israel is only able to murder Palestinian civilians in cold blood and attack UN schools and hospitals because of the huge military cooperation it enjoys with companies and governments around the world. This factory is the clearest example of the vast military cooperation taking place between the UK and Israel.”

Adopting a ‘soft approach’ to dealing with the protest, the police surrounded the building and closed the road going past it to traffic, creating a greater disruption than a few people on a roof could have achieved. A police helicopter was circling the scene at regular intervals. During the two days that the factory remained shut the rooftop occupiers, seven of whom have been to Palestine, read out the names of the dead, told facts about the reality of the ground in Gaza and the personal stories of families living under siege over the megaphone as press and some locals gathered below. Towards the end of the first day, a sizeable, loud support demo had gathered at the end of the road but protesters were prevented reaching the factory by police.

On the second day, one of the protesters left the roof and successfully locked himself to a stairwell leading to one of the premise’s offices. He was eventually released and arrested for aggravated trespass. It was at around six o’clock in the evening, after 36 hours of occupation, that the police decided to change tactics when officers in climbing gear suddenly appeared out of nowhere and accessed the roof, accompanied by a close flying helicopter. However, the protesters were prepared and were surrounded with various lock-on devices, which they used to attach themselves to the roof and each other. As the police cutting team set to work, chants of “brick by brick, wall by wall, Israeli apartheid’s gonna fall” rung out over the rooftops. All the occupiers were eventually brought down by a cherry picker and arrested for aggravated trespass.

The rooftop occupation of Elbit came at a time of close scrutiny of arms exports to Israel. Only the day before the action, foreign office minister Sayeeda Warsiresigned over the government’s stance on Gaza and Nick Clegg called for arms exports to Israel to be suspended, leading to mainstream news coverage of the issue. During the occupation itself, the group received support from the charity War On Want and Amnesty. War on Want’s director, John Hilary, said that they fully supported the demonstrators. Both organisations stressed the need for an immediate arms embargo.

On August 12th the UK government announced findings of its review of licensed exports to Israel. It said that 12 licences had been found for components which could be used by the Israeli occupation forces in Gaza. As a result, the government said it it will take the following action: “in the event of a resumption of significant hostilities, the government is concerned that it would not be able to clarify if the export licence criteria are being met. It would therefore suspend these licences as a precautionary step”. In other words: no end to arms exports before more people in Gaza get killed. For arms dealers it is business as usual. Which means it is up to ordinary people to continue to take action:

– The Palestinian grassroots movement for Boycott Divestment and Sanctions against Israel has reiterated their 2011 call for a two way arms embargo. You can add your voice here (http://www.bdsmovement.net/stoparmingisrael )

– Take action against an arms company which exports to Israel near you. For a list of companies and their locations see http://www.caat.org.uk/resources/mapping/organisation-tag/290

– Target the investors. There have been some recent actions against Barclays for the shares they hold in Elbit, prompting the bank to issue a statement distancing themselves from the accusation. However, Barclays still hold over £3 million pounds worth of shares on behalf of customers and the bank and is therefore a legitimate divestment target.

Statement from London Palestine Action on the action http://londonpalestineaction.tumblr.com/post/93853399864/uk-activists-shut-down-israeli-arms-factory

The rooftop occupiers will appear for a plea hearing at Cannock magistrates court, Wolverhampton Rd. Cannock, WS11 1AT at 9.30am on August 20th. There has been a call out for a support demo.